With this blog post, I would like to make you aware of a functionality that will speed up your project invoice creation process when the scenario described below sounds familiar to you.

The solution part includes a video followed by some detailed information on the functionality.

Let’s assume you are a project lead and in charge of creating project invoice requests for your projects in SAP Business ByDesign at this very moment.

So,what can you do? Here are a few options that were available prior to release 1811:

There does not seem to be a satisfactory solution that allows you to do what you are expected to do in time.

Can SAP Business ByDesign do better?

As of now, project leads or project management team members can easily change project task assignments in two of the places in the work center Project Management that they usually work in:

In both places – depending on whether you prefer to work in the overview of project-related expenses or in the project invoice preparation – you can select one or several time recordings and reassign them to another task by simply pressing the button “Change Project Task Assignment”.

The reassignment is done in the background in order to not keep you from what you originally wanted to do: Prepare project invoicing.

Status icons help you to immediately recognize what the system’s progress on the reassignment is. In addition, as expected, ByDesign reporting provides full transparency on who changed what at which point in time and the changes are reflected in all related documents: time recordings, goods and services receipts, financial postings, and information stored in project management.

Finally, in case you need to reassign time recordings to non-customer-facing projects, this is supported as well!

Please watch the video to see the solution in action. 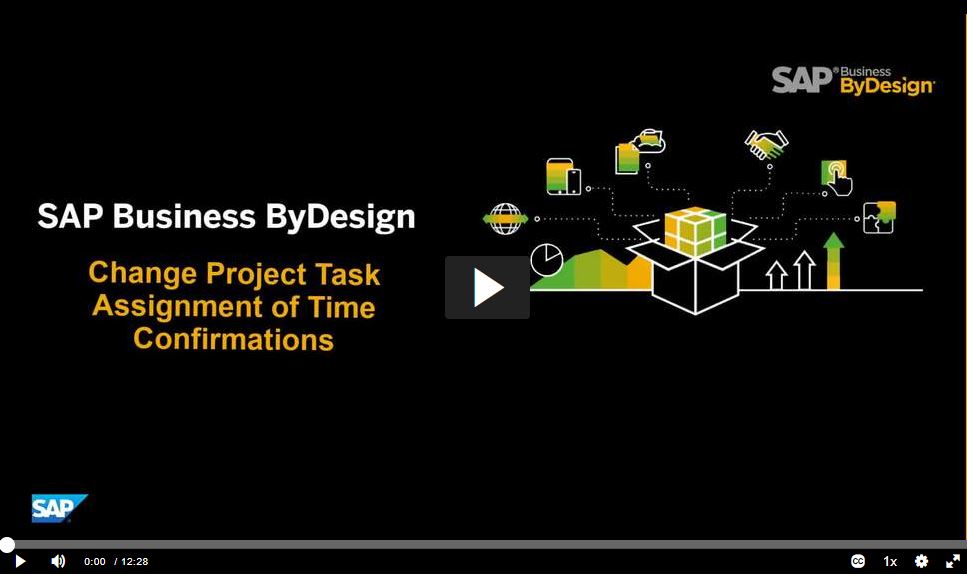 The Functionality in Detail

Here are the main features that come along with the reassignment.

The functionality comes with one configuration element only: Time Confirmation Reassignment in Project Management.

In this fine-tuning activity you can decide where ByDesign users can use the feature.

The second choice you have to make is about the scope you want to allow for the reassignments:

The user can select one or more time recordings, press the button “Change Project Task Assignment”  and then enter the target task in a popup.

Upon pressing OK, the system will start the background job and will display a status icon representing the current status.Clicking the icon will open a popup with information on the target task, target project, target project person responsible, and on who triggered the reassignment and when this happened.

The user can select one or more time recordings, press the button “Change Project Task Assignment”  and then enter the target task in a popup.

Like above, a status icon will be displayed for the time recordings selected for reassignment. The background job will only be started once the user presses Save. Before that, a click on the icon will open a popup which, in addition to the above case, allows to remove a time recording from the list of time recordings to be reassigned.

When you change the project task assignment of time recordings, the system will perform a few checks and will immediately inform you via error messages about facts preventing the reassignment. You can then decide on how to proceed.

An expense cannot be reassigned when:

An expense cannot be reassigned when the target task

Two of the non-functional requirements when developing the functionality were

This led to the decision to go for an asynchronous process. In doing so, in both work center views the control is returned very quickly to the user once the background job is triggered. The user can then proceed with their work proper while the system is working in the background.

The background run is picked up by the system scheduler as soon as possible. Since there are concurrent processes in the background, please give the system two or so minutes to do the job for you and expect the time to be longer the more time recordings you select at a time.

Once the reassignment is triggered this is what happens:

In order to facilitate monitoring the progress of the time recording reassignments, two measures were introduced:

The statuses “In Process” and “Finished Successfully”  speak for themselves. “Finished with Error” and “Wait for Retry”, however, require an explanation.

“Wait for Retry” informs you that concurrent processes try to access the same data and that due to these locking issues the system will try again soon.

With these very detailed monitoring capabilities being available, we decided to skip time recording approvals independent of whether the time recording was performed by a 3rd party or if the setting on the project task enforces is for the original time recording.