This blog is part of a blog series that shows how innovative business models can be built based on a process-driven IT architecture. It shows you a way to approach your digital transformation challenges by using the standard notation BPMN 2.0 and creating process models based on the process-driven approach (in short PDA). PDA is a methodology which helps you to define process models in such a way that they stay flexible and maintainable while actually being lived within your company. Finally, these process models can be automated by executing them within a process-engine.

Find more details in part one of this blog series:
Blog Series 1/3 The Process-Driven journey to Digital Transformation – Creating innovative business models by utilizing a Process-Driven IT Architecture

The whole approach is then being demonstrated using the fictive “Smart Laundry” scenario. Accompany businesswoman Angelina who is re-inventing her business model in part 2 of this blog series:
Blog Series 2/3 The Process-Driven journey to Digital Transformation – Introducing the Smart laundry scenario

In the third and final blog of this series, we take a look behind the scenes of our demo scenario “Smart Laundry”. You will experience the transition from idea to implementation and see how the scenario has been built on top of services inside the SAP Cloud Platform with Workflow Service as the process-engine and heart of the application:
Blog Series 3/3 The Process-Driven journey to Digital Transformation – A look behind the scenes

Smart Laundry scenario: A look behind the scenes

In the previous blogs of this series, we’ve learned that companies who want to be leaders in the race towards a digital future need to focus on their individual and differentiating business processes.

We have also learned that using the right notation and methodology is key when transferring process-knowledge from the heads of a few into common knowledge and into implementation.

We have then been introduced to the Smart Laundry scenario which shows how the methodology is being applied within a showcase example.

Now within the third and final blog in this series, we would like to take you behind the scenes and have a look at the architecture and implementation details of the smart laundry scenario as well as having a look at how an actual service point has been built from prototype to showcase within our iot-lab.

After developing the idea for the Smart Laundry Service, we have used the cloud-based tool Signavio in order to document and discuss the process model – similar to how Angelina and Christian did in our story.

This resulted in a BPMN 2.0 model of our smart laundry process:

Following the process-driven approach as our core methodology, we have separated the business process model from the technical process models which have been implemented as so-called SCIL (service contract implementation layer) processes. You can find further details on this topic in the first blog of this series.

Early on we’ve decided to build the scenario in two process engines in parallel:

Both engines work a little bit different in detail but both allow to automate BPMN 2.0-based processes.

Since we did not have an actual service point yet, we’ve built a Fiori-based start-UI to either start a process on Process Orchestration or on Workflow Service. To do that, SAP Cloud Platform Integration (CPI) is being called via a REST service from the start-UI and routes requests to the appropriate process-engine. For data storage, we at first used Value Mappings in CPI and a java application which acted as a backend exposing CRUD REST services for different data objects. Later on in the project, the backend functionality has been moved into an S/4 system using OData services for data access.

Figure: Routing by the CPI iFlow which is triggered by the sensors

Determining the ideal supplier has been automated by using Business Rules which are available in both environments: As a service in SCP and as an integrated engine on Process Orchestration.

Figure: Business rule in SCP which holds the logic to determine the ideal supplier

The task UIs, as well as a dedicated process-phase monitor, have been built as Fiori applications on SAP Cloud Platform.

Small adjustments had to be done for the task-UIs between the on-premise and on-demand UI versions, but the code-base is the same.

A custom phase-based monitor has been built which allows seeing all running and completed laundry service processes based on the different process phases. It offers a history log and includes triggers which allow simulating intermediate message events in the processes which will actually be triggered by sensors on the physical service point later on.

For collecting all tasks, a central MyInbox in SCP is being used to retrieve tasks from both orchestration engines. It is integrated on a Fiori Launchpad from the SCP Portal Service. The Launchpad displays each application that is relevant to the user as a single tile. 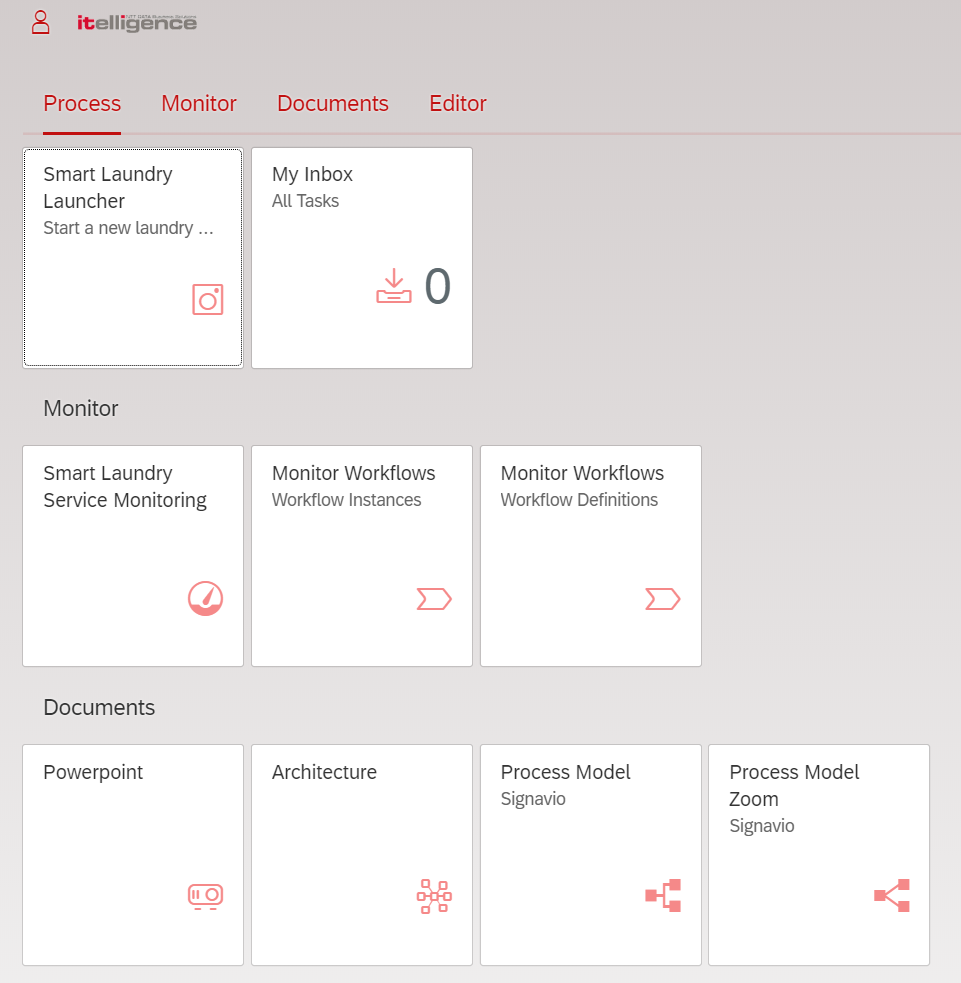 Figure: Where the work gets done: Fiori Launchpad

The resulting architecture for the on-demand process looks like this:

After implementing the processes the next step was to build the actual service point to trigger events within our process. So far this part has been simulated from our start- and monitoring UIs.

We have started by building a first quick and cheap prototype for the service point in our IOT lab. This prototype has already been using two Arduinos and a Raspberry PI for handling sensor data and sending events to our CPI endpoints on the internet. As sensors, we have been using RFID chips which have been built into cloth hangers. We have used two colors of cloth hangers: Red ones which trigger on-premise processes and blue ones for the cloud. The routing to the correct process engine is being handled by our CPI iFlows.

Here a picture of our first (fully functional) prototype: 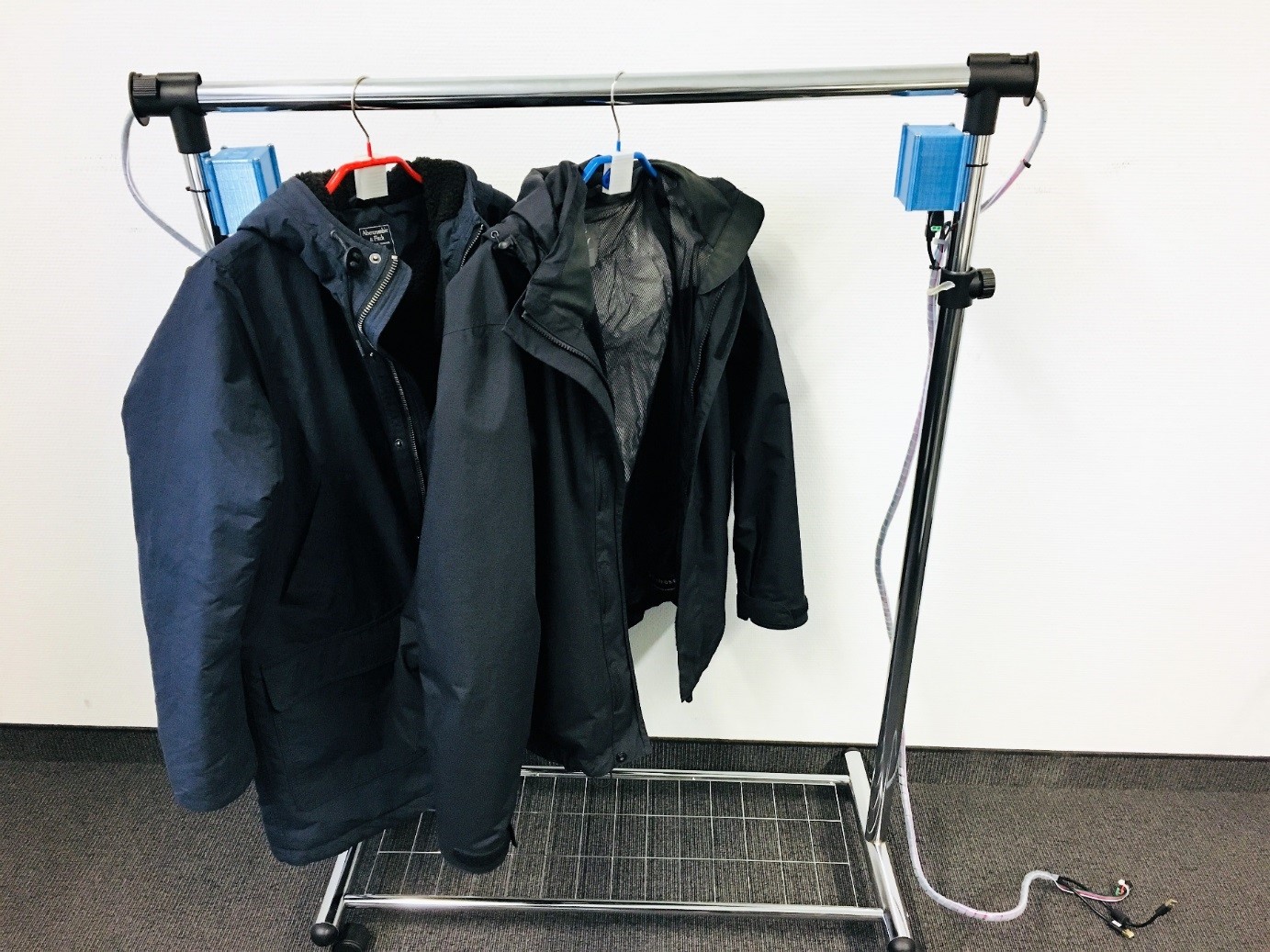 As you can see it is no beauty yet, but it was very quick and cheap to build in order to verify the general setup.

Since the prototype was working as expected, we were now able to think about how the final product should look like. We had to make sure that the device would be portable and fit into the trunk of a medium-sized car. So quite some thinking has flown into sizing and transportation. Other aspects concerned the cable management and the fact that we wanted to integrate an iPad mount in order to demonstrate the scenario on fairs and similar.

The final design has then been sent to a local carpentry which did a good job building the product. Some minor tweaks were done and the whole thing was polished by applying the decals. 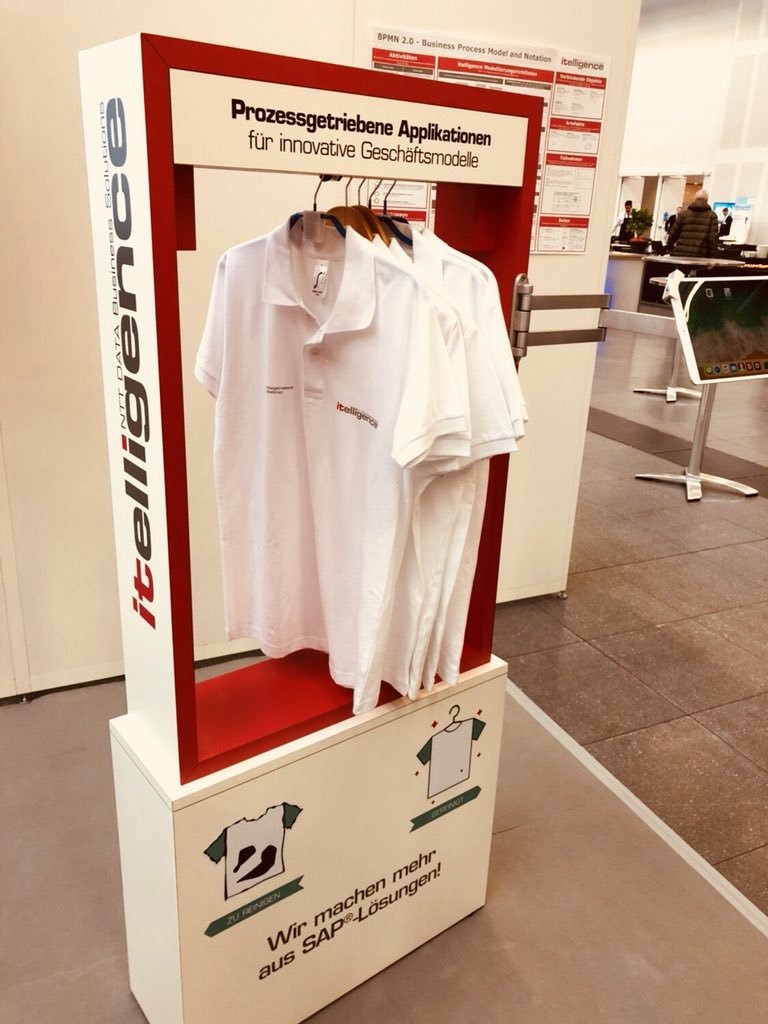 The top part can be taken off and sink into the lower part in order to make it more compact. When in operation, the lower part also holds the hardware which is hidden behind a magnetic flap.

Since being built, our Smart Laundry booth has collected a few travel miles already. We, for example, show-cased it at various fairs in London, Berlin, Bielefeld, Stuttgart and also to the product management team of SAP in Walldorf. In addition to fairs, we are also showing the scenario at universities in order to show the students how to make the transition from idea to implementation for innovative business scenarios. 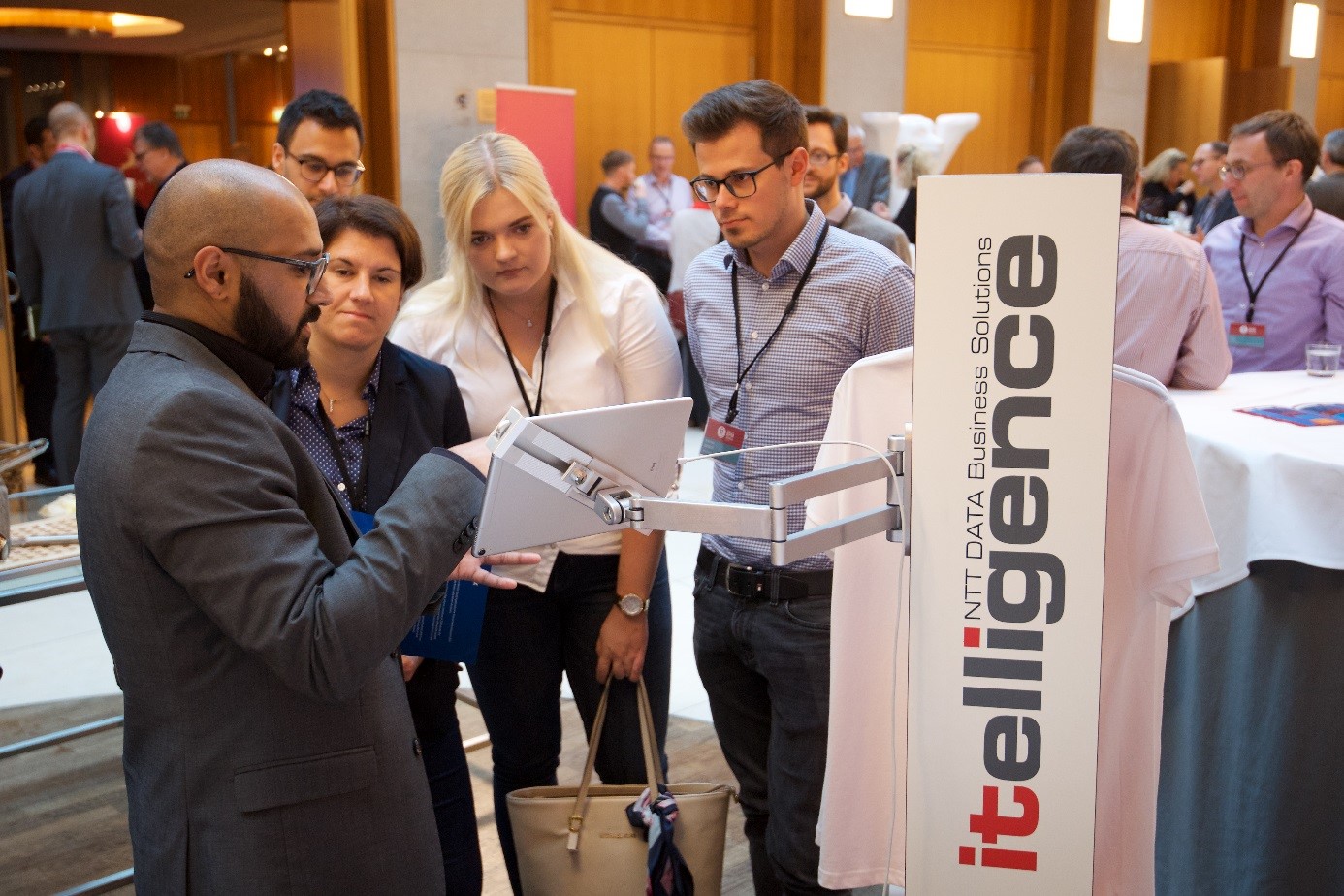 Using the Smart Laundry booth helps a great deal to make visitors understand how a process-driven approach to digitalization can work and enables them to adept it to their own use-cases. It also helps to grasp the power that lies within your organization that can be unleashed when creating the right mindset and using the right methodology.

This has been the final blog of our series. I hope that this series sparked some ideas for you about how to tackle the huge topic “digital transformation” in a meaningful and process-driven way. Take our Smart Laundry scenario as an example and adapt it to your own use-cases. Find your own tweaks and adjustments while keeping the core-ideas discussed in this blog-series in mind.

Personally, for me there are two key components which need to go hand-in-hand:

The best methodology is useless if the culture is not there to utilize it. In a similar way, even with the best and brightest minds and a great culture, success is not guaranteed. You need to find the right approach in order to succeed.

If you are interested in diving deeper into the topics touched upon in this blog series, you want to discuss certain aspects of digital transformation or if you are looking for a partner to accompany you on the journey into digital transformation: Don’t be shy and get in touch! Just comment here or find my contact data inside my profile.

And now have fun creating new business models that have an impact and make a difference for your customers. Always remember Walt Disney: “If you can dream it, you can do it”.