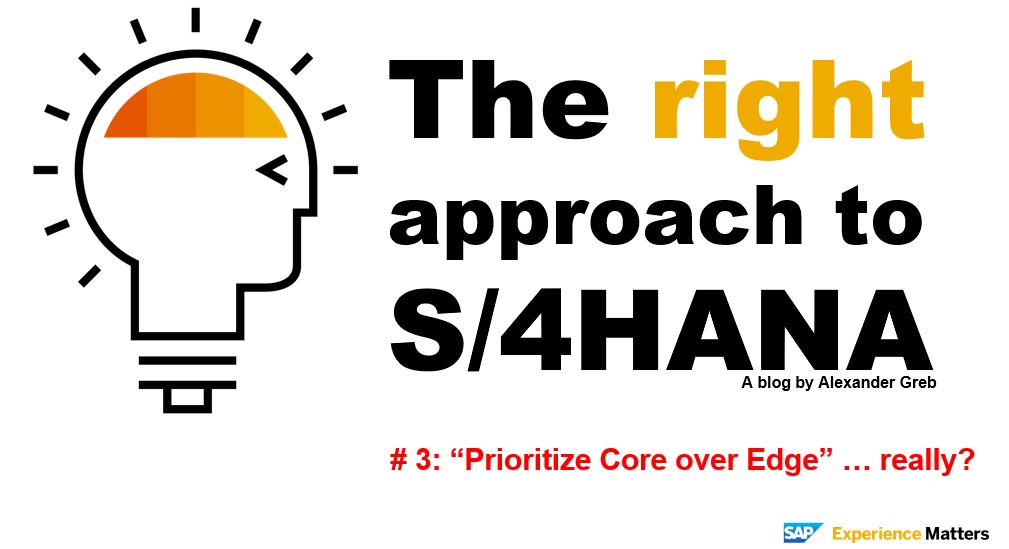 Today we want to do a little sidestep into the depths of a strategic architecture setup. At this year’s FKOM Barcelona, one of the most discussed statements out of the many sessions around the S/4HANA Movement was “Prioritize Core over Edge”. So what does this mean, should we agree to this general statement or is there a more differentiated point of view on this topic the way to go?

I always try to have a differentiated point of view on things, so let’s first take the title sentence of this blog’s episode, put its ingredients apart and look at its elements and its conclusion and see if we should agree to it, since at first it (I quote here) sounds like the serial winner of a buzzword competition, which makes a well-founded debate not really easy.

So what is “core”, what is “edge” and should we prioritize something over the other?

Core: It is a package that every company needs to fulfill its purpose and make a profit.

Let’s start with “core”. Well, the core is not really “one” thing, since a single thing rarely moves the needle, its rather a combination of technologies working together that has at its heart a platform for your mission critical processes, also known as enterprise resource planning (ERP) based on in-memory technology and combines the transactional and analytical world and presents that via a revised user experience (sorry for that S/4 pitch). You can put it simple: It is a package that every company needs to fulfill its purpose and make a profit.

“Edge” is a family of powerful microservices that help you achieve a quantum leap in business outcomes by to gaining insights, monitor real-time events and actions and execute special enterprise processes. Basically, an afterburner for your business.

Edge: Basically, an afterburner for your business.

This premise not only makes a “prioritization” at first glance difficult (who doesn’t want an afterburner?) but you can criticize above statement directly with two arguments:

First, the statement implies, that the “Core” has a some fix point at which you can shift your resources to the “Edge” – this is of course unrealistic. Development of the core is a journey that barely has an end, so talking about a fixed maturity level that allows a shifting of resources is a rather theoretical practice.

Furthermore, there are definitely edge services that will give you benefits even while using an underdeveloped core.

All those points (and there may be more) are absolutely valid.

The basic principles of success in the 21st century are digitalized end-to-end processes that put emphasis on customer centricity.

BUT (in capital letters): On the other hand the underlying premise is clear: The basic principles of success in the 21st century are digitalized end-to-end processes that put emphasis on customer centricity. And this is naturally a home game for the digital core. If you would put your resources on the edge side in a dedicated attempt to raise as many Edge–advantages and innovations as possible, while neglecting the Core–processes you would quickly come to a point where your innovation efforts are running on empty. Without the digital core at a maturity level that at least matches your efforts on the edge-side your transformation runs out of steam. The Core is your door opener to the benefits of the Edge, and if this door is not open enough, your effort will not work out.

And it is a common misunderstanding, that innovation lies mostly within the edge. This is completely wrong, the game starts much earlier. Profitable experiences that are set on customer centricity rely on e2e-processes within the digital core. A responsive connection of demand to supply enables personalization and embedded optimization towards profitable fulfillment, which is heavily reliant on the real time granular data and optimal execution driven by the S/4HANA Digital Core.

The Core is your door opener to the benefits of the Edge, and if this door is not open enough, your innovation effort will not work out.

Also the value-adding core processes Design to Operate, Lead to Cash, Source to Pay, and Total Workforce Management all need the sound foundation of S/4HANA for execution, intelligence, and embedded targeted and profitable user, buyer, and customer experiences at a next level.

So, how to behave now? Prioritize Core? Well, it is more of a “do the one thing without neglecting the other” -topic! Get the Core running as advanced as possible (we do our best that this is going at the least possible effort) and pull the Edge in its slipstream with it. Keep a wise pivot between those two. Edge needs a good Core foundation to work properly and an advanced Core alone may be not enough for you.

So, how to behave now? Prioritize Core? Well, it is more of a “do the one thing without neglecting the other”-topic!

So prioritize the wise pivot between Core and Edge, with the Core leading. And this pivot is always an individual optimum that differs from customer to customer.

I find your series quite interesting and enjoy the new approach

Indeed, fresh approach, I like it! May I suggest you make a directory leading to all chapters (maybe as an update on the first blog?). This would ease navigation between chapters.

Hi Renaud,
that's a great idea. Will implement it .... as soon as I find out how it works. 🙂
Cheers,
Alex

You could just make a kind of index with the list of all blogs at bottom of this blog (URL opening in an other window), or at least mention in each blog the link to the previous and next (once you created N+1, you come back to N and update it with URL of N+1 at bottom of page, and insert URL of N in the N+1 as in introduction).

I like the way you write, Alex. Keeping it real. Looking forward for #4 and beyond.