The second part shows the method header information in the following form:

But maybe its easier to see the plugin in action

The plugin is still in development but can already be downloaded over the Eclipse marketplace and the source code is available on GitHub. The only prerequisite is to use the Eclipse version Photon, 2018-09 or 2018-12 and of course ABAP in Eclipse has to be installed as the plugin reuses some ADT features.

Have fun while trying it out and let me know your experiences and impressions. 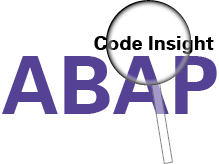