In the past years, the approaches to minimize downtimes evolved significantly. When talking about the approaches shipped along with Software Update Manager 2.0 there are three different main approaches available for applying support packages in SAP S/4HANA:

Both, the standard approach, as well as the near-Zero Downtime Maintenance (nZDM) contain major improvements for minimizing the technical downtime. These approaches are generally available for all customers.

However, neither standard, nor near-Zero Downtime Maintenance offer the option to reduce the technical outage down to zero. This can be achieved by the next level of downtime-optimization: Zero Downtime Option of SUM. One important thing to be considered as well: the more you want to optimize the downtime, the more effort you have in the project. The effort includes project planning effort, as well as testing effort which is higher in case of zero-downtime updates.

There are three facts about the Zero Downtime Option:

How does ZDO work?

The terminology bridge has been introduced with ZDO. It’s a part of the existing system that runs in parallel to the upgrade instance where the maintenance event is triggered by the Software Update Manager. Usually, at a certain point of time, end-users will be logged-off from the system and the technical downtime starts. In case of ZDO, all users will be transferred to the so-called bridge sub-system. The good thing: the users don’t even realize this since the transition to bridge happens in the background.

What happens during the transition? In simple words, it’s just reconnecting from one database schema to another one. If you’re interested in more technical insights, I’d like to promote the recording of my TechEd session from Barcelona in 2019 CAA301 – Leveraging Zero-Downtime Maintenance for SAP S/4HANA.

The Zero Downtime Option of SUM for SAP S/4HANA is available for the following SAP S/4HANA releases: 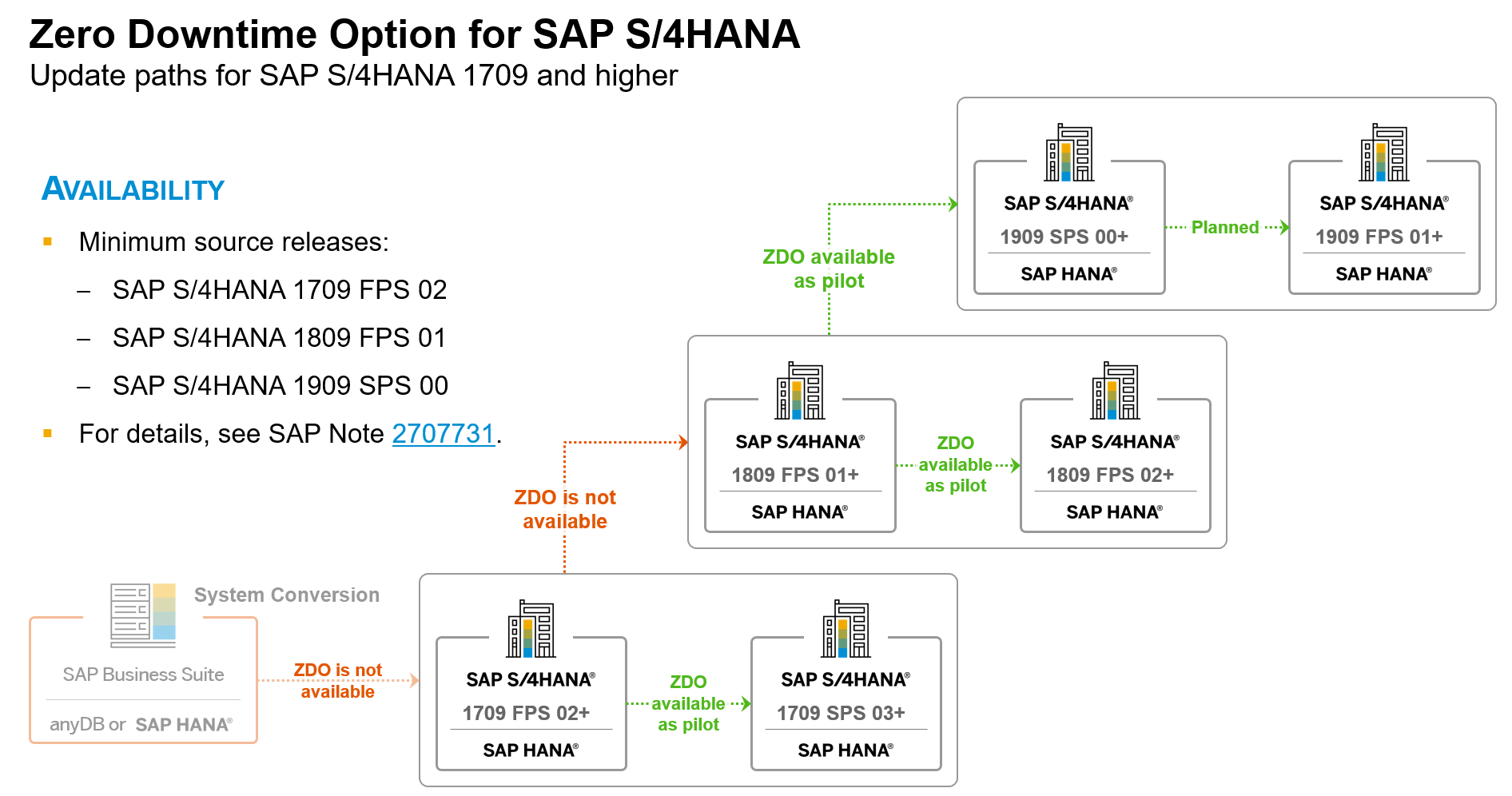 Upgrading to a higher major release is available as per description in the official SAP Note 2707731:

Zero Downtime Option of SUM for SAP S/4HANA is currently available for service-based pilot projects only. So, it’ refers to a restricted shipment which makes it mandatory that someone from SAP (e.g. Premium Engagement or SAP Consulting) is involved into the pilot project.

If you’re interested in being a pilot customer, follow the instructions described in SAP Note 2707731 “Prerequisites and restrictions of Zero Downtime Option of SUM for SAP S/4HANA”. This SAP Note contains all prerequisites about the supported source and target versions, as well as the information about the registration process for the pilot program.