As described in the blog https://blogs.sap.com/2018/08/14/sap-cloud-platform-integration-odata-v2-headers-propagation-and-response-body/, in SAP Cloud Integration version 2.43.x and above, all the message headers implicitly getting converted to HTTP request headers and sent to OData V2 endpoint with OData V2 outbound adapter/connector.  This required some extra steps to clean up headers via script before invoking OData V2 endpoint. This ended up in multiple scripts steps in integration flow and, it was difficult identify the message headers which were creating issues in invoking OData V2 endpoint.

SAP Cloud Integration version 2.49.x reduces this complexity. OData V2 outbound adapter now comes with a UI enhancement where-in, you can add the headers which you want to send as HTTP header(s) to OData V2 endpoint. This blog explains how to the send the required headers to the backend OData V2 system. 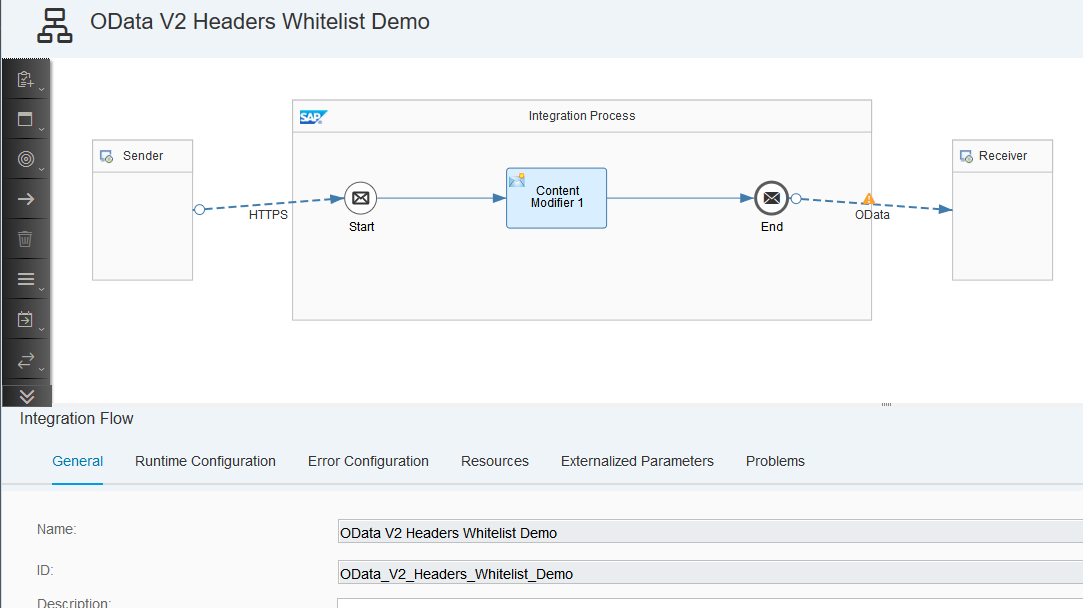 Now consider that you wish to send an if-match header and a myHeader to OData V2 endpoint.

The if-match header is being passed from the caller system (e.g. POSTMAN client) who invokes the HTTP endpoint, provisioned after the deployment of Integration Flow. For this, you need to make an entry of if-match in Allowed Headers field of Integration flow properties.  Another header called as myHeader, created in content modifier. To propagate these two headers to OData V2 endpoint, you need to add these two Request headers (under HEADER DETAILS section) field as shown below. 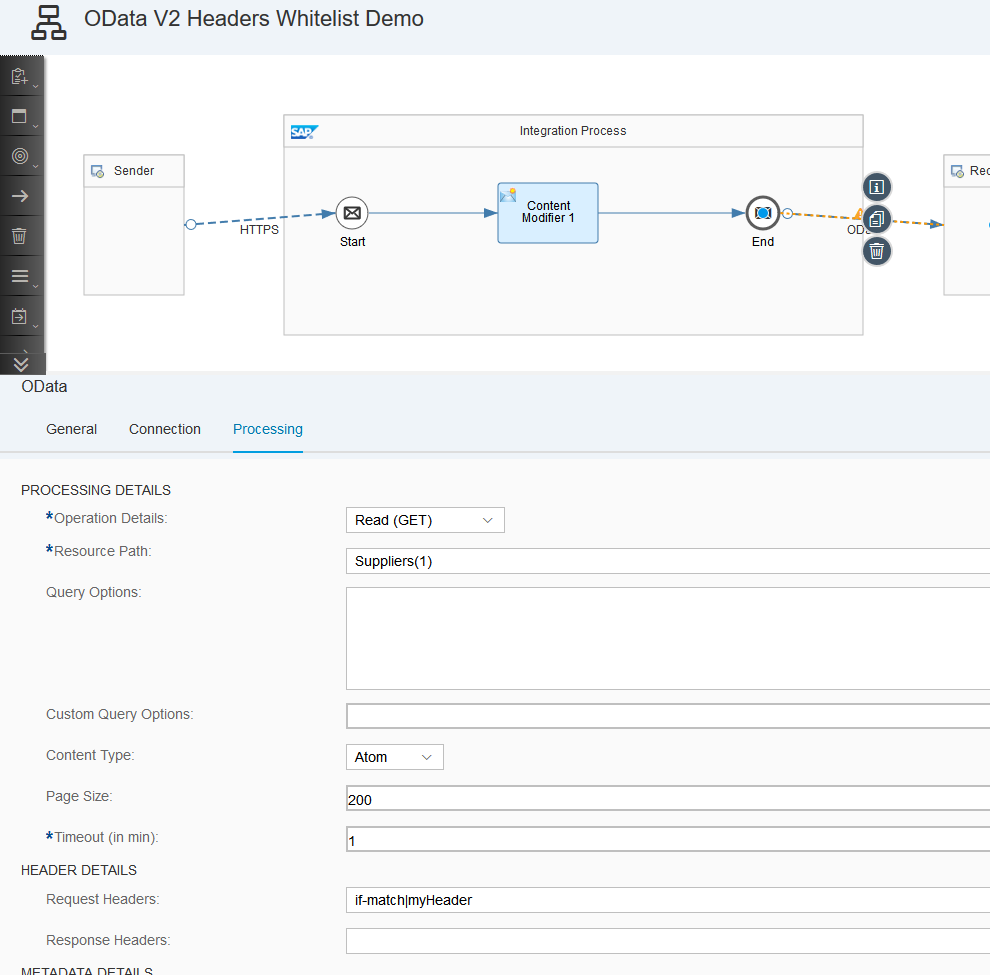 If you are configuring OData v2 endpoints in SAP Cloud Integration OData V2 outbound/receiver adapter, which are authenticated by apikey, then you can create a header named apikey in either content modifier or script step (like myHeader in the above section) and provide the required value to apikey.

Since apikey will be used as authentication header, you need to set the Authorization property drop down control of OData V2 outbound/receiver connector properties to None.

OData V2 outbound connector will now convert these two headers as HTTP header and sets the values of each headers as available and sends it to the OData V2 endpoint.

After deployment of this integration flow, you get access to the endpoint from the monitoring view under Integration Content

When you invoke this endpoint from a client, for example, POSTMAN client, with proper if-match header value, the Supplier response will be sent, as shown in the screenshots below.

If you expect some of the response headers, which will be sent by the OData V2 services, to be converted as message headers, then you should make such header entries in Response field.

A scenario this requirement comes from is testing of integration flows.

I have to pass two header fields to the OData service in the GET request.

In SAP, I would fill these in the SAP Gateway Client in the following way (this is only an example!) 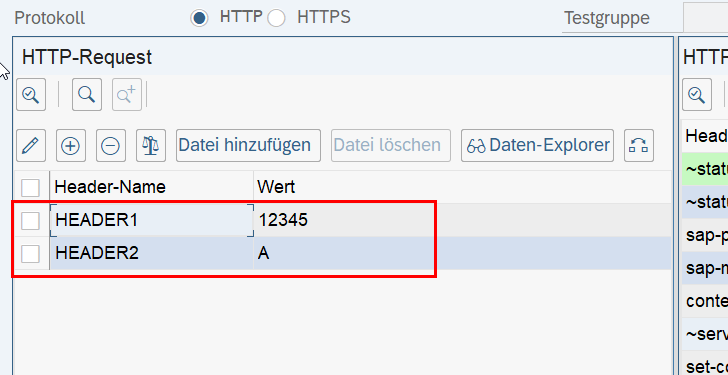 How can I pass these two parameters using the CPI?

Hope this information helps you, let me know in case if you have further queries.

we have a CPI scenario including a message mapping step followed by an Request/Reply step with OData receiver adapter configured for batch processing in combination with POST method.
Thereby 1..n IDocs are mapped to OData batch target structure and here we would like to create one http header field including corresponding IDoc number per batchChangeSetPart:

Is this a restriction for OData batch calls or did we forget an important setting to make it work?

Are you looking for these header information in the response as well?

thanks a lot for your explanation. First I thought the "message after receiver step" illustrates the OData batch request at the last stage before CPI sends it to the receiver system but you of course you are right - this step consists the OData batch response. However, I only need the header information in the request and not in the response.

Regarding your $batch statement:  As the step “Message before Receiver Adapter” shows that the http header field “integrationMessageId” is already provided with an IDoc no. value I assume now, that the receiver system doesn't process it properly. Therefore in CPI logic anything works fine.

I have added the header name as mentioned in your blog. But it will not be sent to target system. In message trace we can see that it is missing in the step "Message after receiver adapter"

Any hint why this happens?

I think you need to check for the sequence "Message before Receiver Adapter" with help of page navigation (as I see you are at the 2nd of 6th page, top-right corner). Also, can you check the 2nd list entry (from the left-top 2nd entry) as well?

Also, you can check the SAP Note for more info https://launchpad.support.sap.com/#/notes/2852998

thanks for your fast answer!

I recommend you go through the above SAP Note for details on different sections for details.

Also, is the end to end scenario not working? Or you just looking for the entry in tracing?

it is saying to set the camelhttpresponsecode header with value 200 in your integration flow before the End Message or End Event to resolve this error.

Tried but not happening.

Kindly help on how to resolve this issue please.