As part of the S/4HANA Regional Implementation Group, I have the privilege of working with a lot of customers who are implementing SAP S/4HANA locally, regionally, and internationally.  Now that SAP S/4HANA has been available for over 3 years, we are more often finding customers who are upgrading their release, sometimes as part of their initial project, sometimes as a next phase.

Recently the SAP Fiori apps reference library added a new feature to make it easier to work out the impact of your SAP S/4HANA upgrade.

You can try out this new feature out for yourself by following the short example below.  There’s also some official documentation in the SAP Help Portal on the SAP Fiori apps reference library in the User Guide section Creating a Delta of Apps Between Releases

So, imagine you first implemented SAP S/4HANA 1610 FPS01.  Even if you implemented every SAP Fiori app available that was only about 600 apps.  Now you want to upgrade to 1809 and there are over 1250 Fiori apps. Conclusion: You need to plan for the new apps you are introducing!

You can do this in a few easy steps:

You can start at the SAP Fiori apps reference library homepage. Start by selecting the apps you want to add as part of your upgrade.

If you want to aim for maximum SAP Fiori coverage, or you simply don’t know what apps you want yet, you can simply multi-select all apps available in your target release. To do this, you select the main filter Fiori apps for SAP S/4HANA. 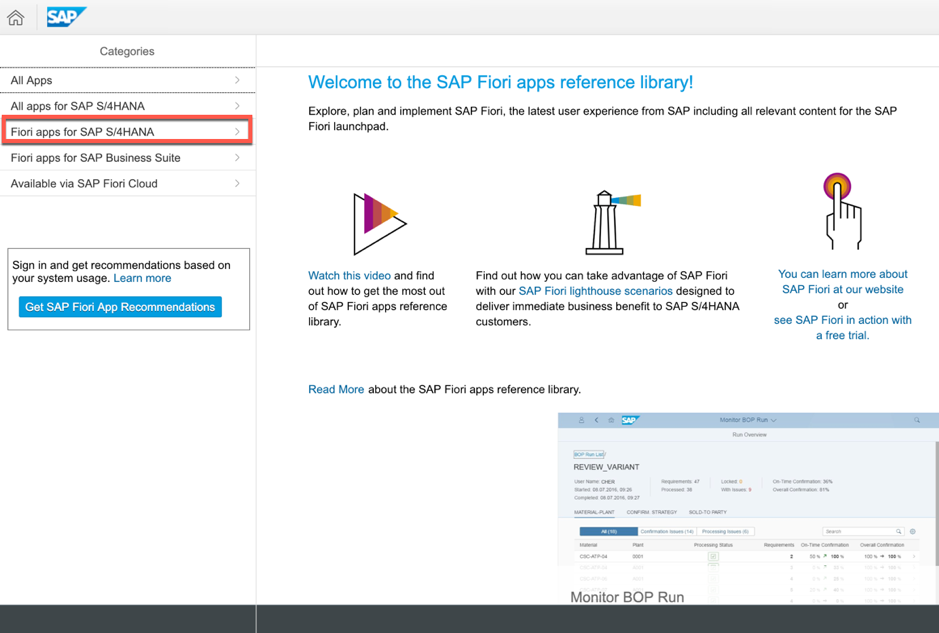 Then select the sub filter All Apps.

Then multi-select all the apps available so they are added to your selection list. 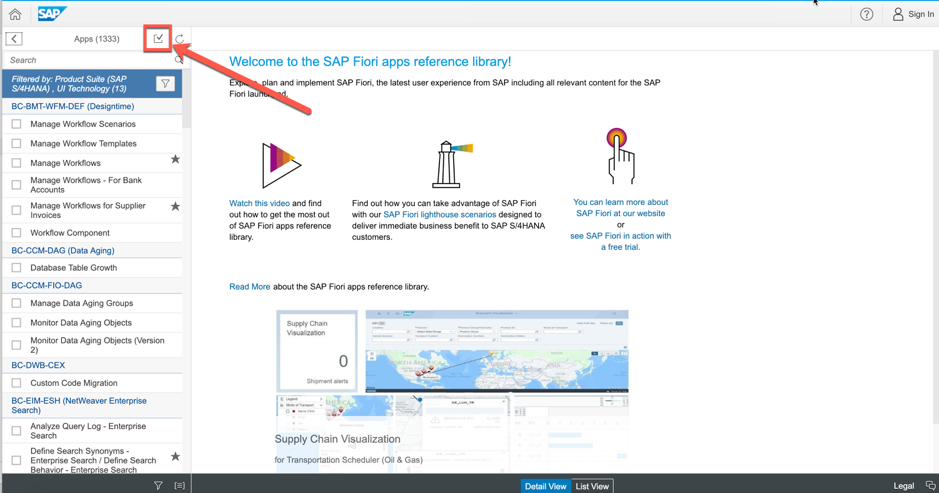 You can see which apps have been selected by the checkbox in front of each app’s name in the left-hand pane. 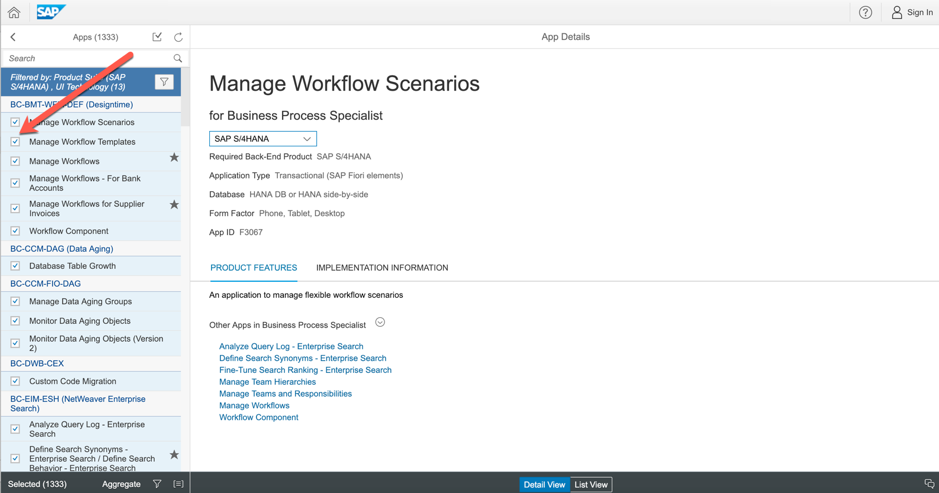 Once you have selected your list of target apps, you can move straight to the next step or you can refine the list further before continuing.

When you are refining your list, if you want to return to all the apps you have selected, just press the Home button and on the Fiori apps reference library homepage you will find the My Selection filter has been added. 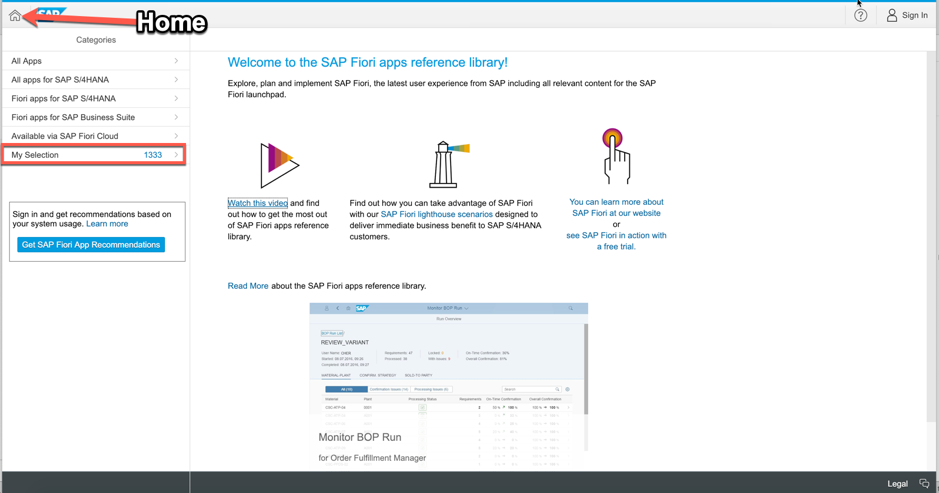 Of course, for your own use cases you can use whatever filters or searches you want to select for your initial list of apps. For example, you might select just the apps you are interested in, or better yet go for holistic business roles or business catalogs that are most relevant to your processes.

If you haven’t selected apps before, these references will give you some hints:

Step 2: Aggregate your selected apps against your target release

When looking at your list of selected apps, press the Aggregate button. 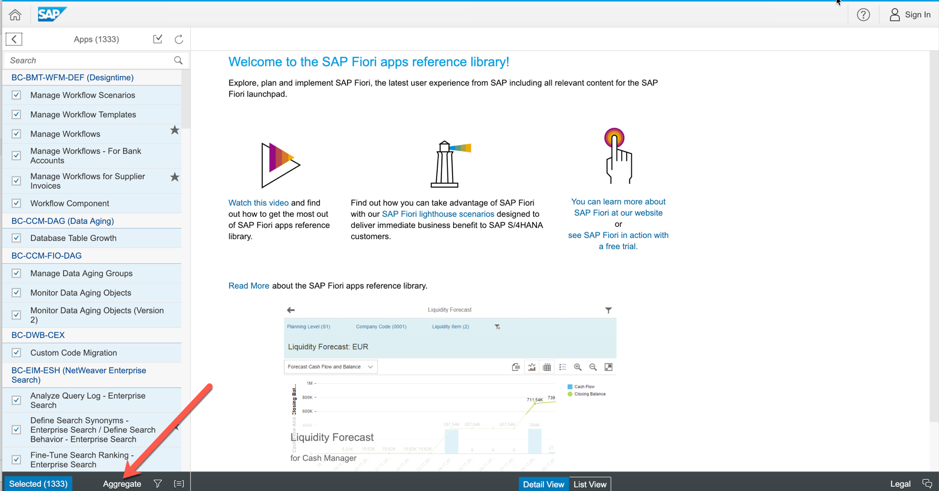 Once the aggregation has finished and the Aggregated Implementation Information page is displayed, use the dropdown on the SAP S/4HANA release to select your target release. 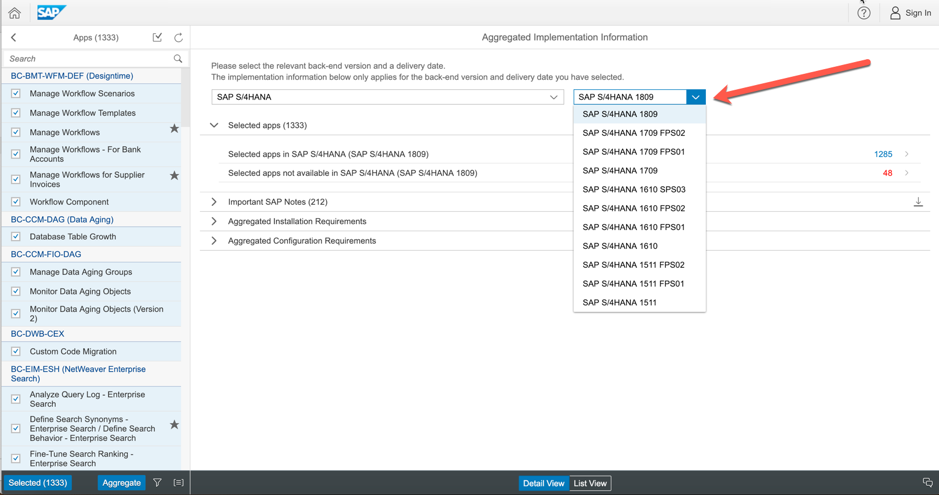 If you wish, at this point you can view any unavailable apps in your target release by selecting the line Selected apps not available in SAP S/4HANA (<your target SAP S/4HANA release>)

This list itself can be useful because any apps that are deprecated between your source and target release will be shown here, including in which S/4HANA release the app was deprecated.

You can also see whether there is a successor app in your target release.  If you see the marker Successor also chosen, then the successor app is already listed in the Selected apps available in SAPS/4HANA (<your target SAP S/4HANA release>). 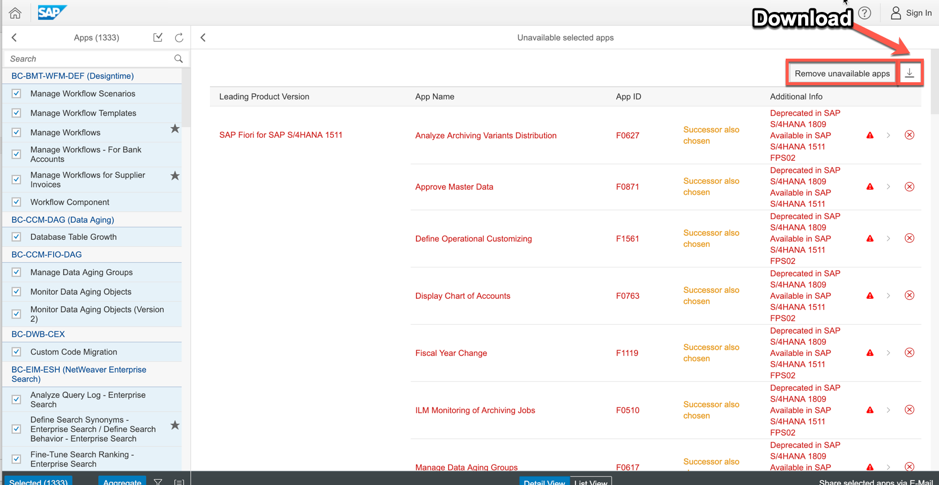 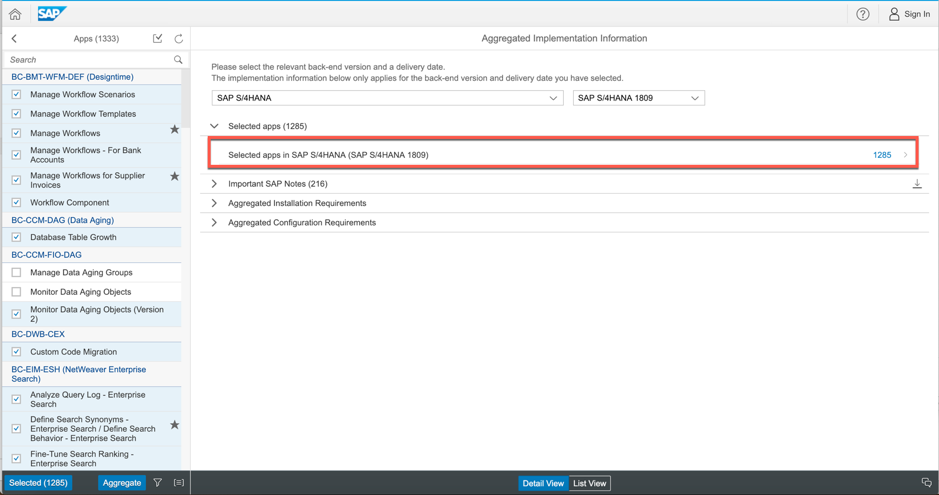 Having narrowed down the selected apps for your new release, next you simply use the dropdown again to change the focus of the aggregation to your source release. 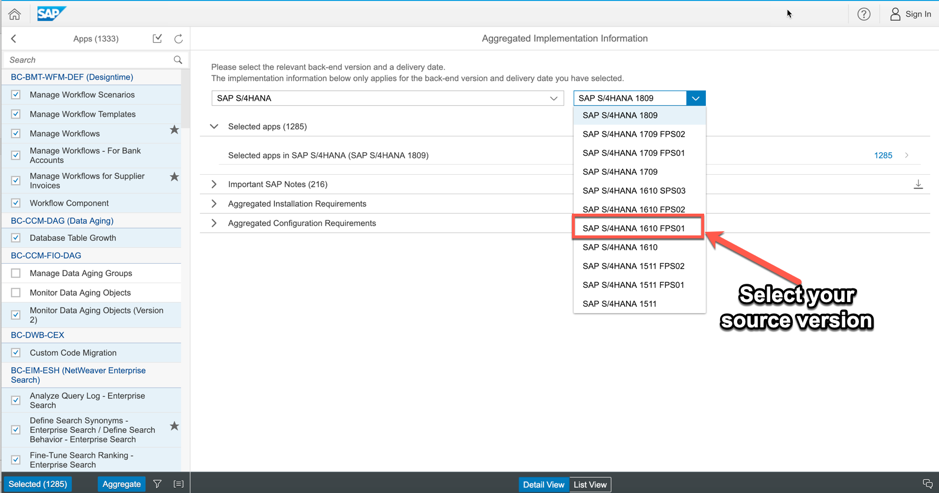 By changing the aggregated implementation information to your source SAP S/4HANA release, you can now see which apps among the selection are possible to deploy now in your source release, plus the delta of new apps, i.e. those apps that you will be able to deploy once you upgrade to your target version.

So, in this example, once you change your selection to the source release SAP S/4HANA 1610 FPS01 you can see the delta apps listed as Selected apps not available in SAP S/4HANA <your source SAP S/4HANA release> 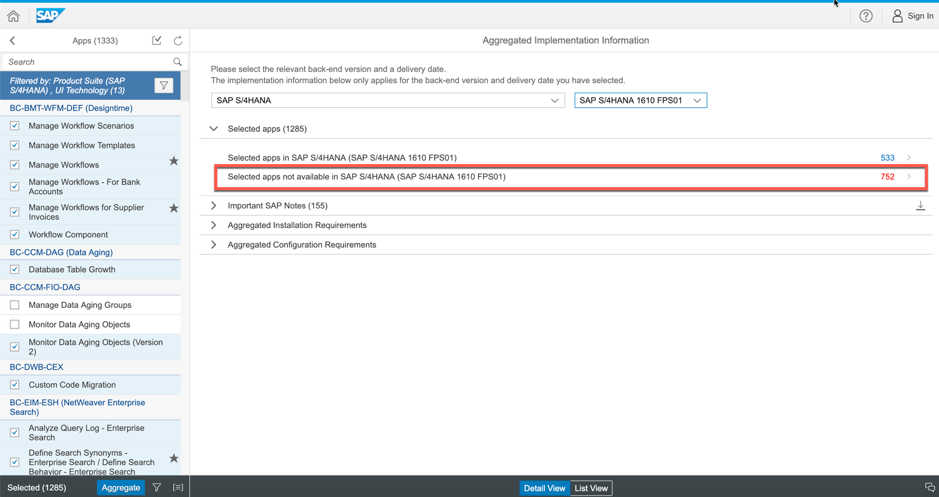 Step 4: Review the list of unavailable apps in your source release

Having found the list, you can then drill down to see further details.

For example, in the Additional Info column you can find out in which release the new app became available. 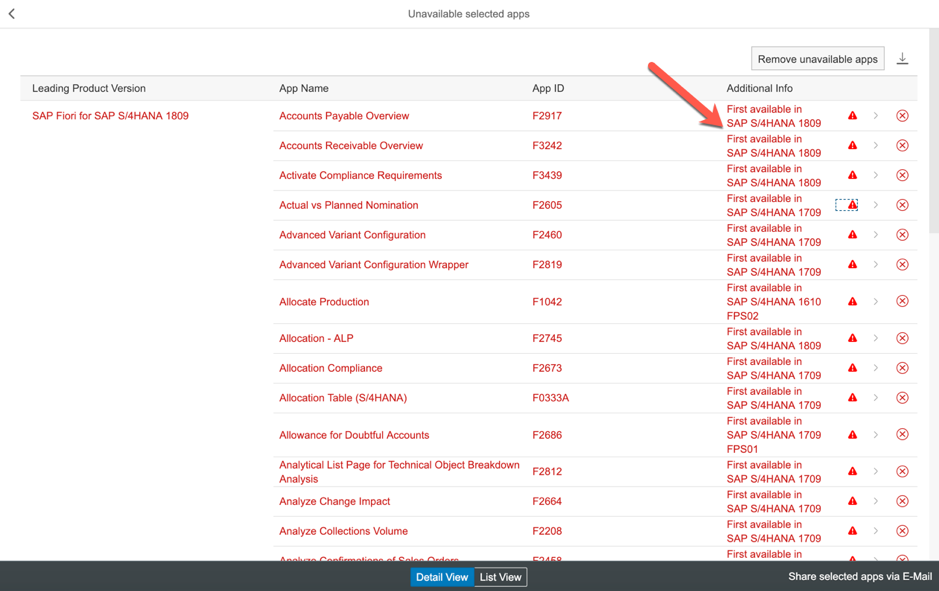 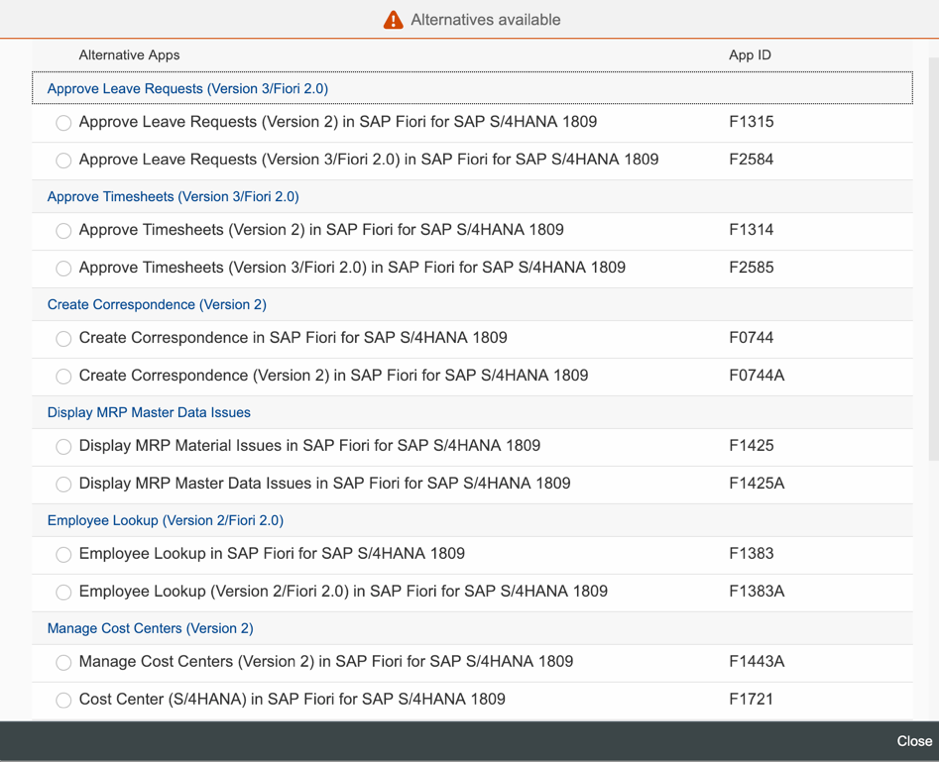 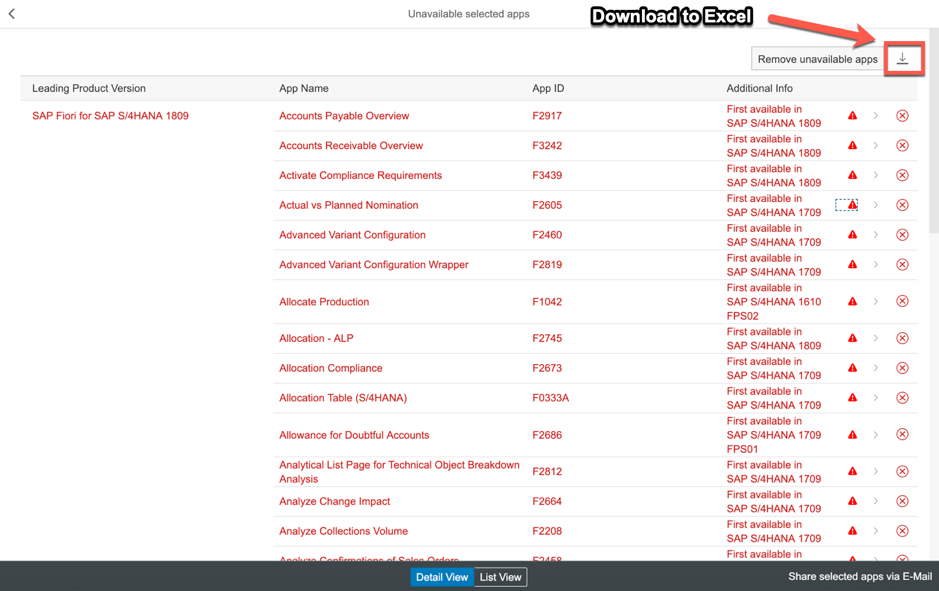