With boom in bitcoin and expansion of blockchain based platforms, a private blockchain network was introduced by Multichain for Enterprises and finance sectors. In this blog, we will explore multichain and how SAP has integrated it in to its cloud platform. Before we start with Multichain, please read What is Blockchain?

Multichain is a platform which uses integrated management of user permissions to create private blockchains. It is derived from bitcoin. It supports Windows, Linux and Mac servers. Multichain was developed to overcome shortcomings of Bitcoin such as generic mining, privacy and openness.

Pros and Cons of Private Blockchains

Private blockchains are the one that are controlled by single or multiple organizations that determines who can read it, submit transactions to it, and participate in the consensus or mining process. This brings both advantages and disadvantages with itself.

It does not support smart contracts. As per SAP, “Since they are 100% centralized, private blockchains are useful as sandbox environments, but not for actual production.”

Unlike Bitcoin, from which it is derived, Multichain does not depend only upon the concept of Proof of Work that can be owned by a single person in some situation. It uses a round-robin schedule, in which the permitted/authorized miners must create blocks in rotation to generate a valid blockchain. This scheme is implemented using a parameter called Mining diversity.

Miners in Multichain neither charge transaction fees nor block rewards. Hence, transaction is free between two parties. But, a miner can charge a fixed service fee from the network participants. SAP too applies this type of fees and charge a fixed amount for a Block per hour.

Configuration of Blockchain in Multichain

In a configuration file, Multichain allows a user to set all the blockchain’s parameter that are mentioned below:

These configurations are maintained in the first node or Genesis block. To add a new node, Multichain requires to be run from another computer using a node address (e.g. chain1@12.34.56.78:8571) with three parameters: 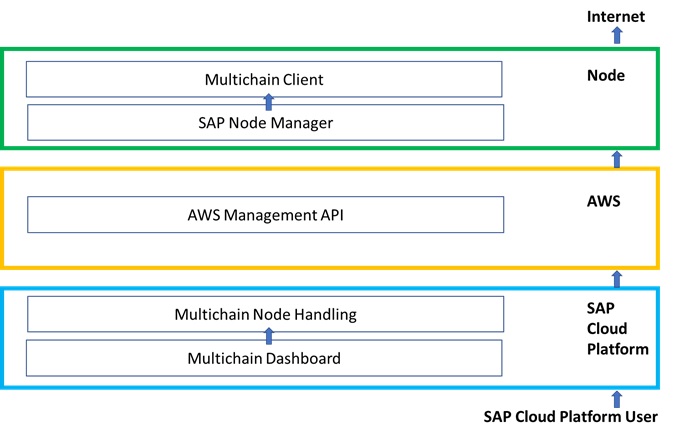 This is a generic architecture where it is shown how a MultiChain network is setup and how SAP Cloud Platform communicates with a MultiChain Node. To learn more about Multichain Architecture please refer the references.

Setup of MultiChain on Cloud Platform

Follow the following steps to enable MultiChain on your Cloud Platform:

Step 01: Go to your SAP cloud platform [If you don’t have, go here and create one] and select region as Europe (Frankfurt).

Step 02: Create a sub account there [Give your desired Display name and Subdomain name].

Step 04: Inside Entitlements menu, you will see Edit button, click it to change the mode to editable and scroll down to multichain as shown below: 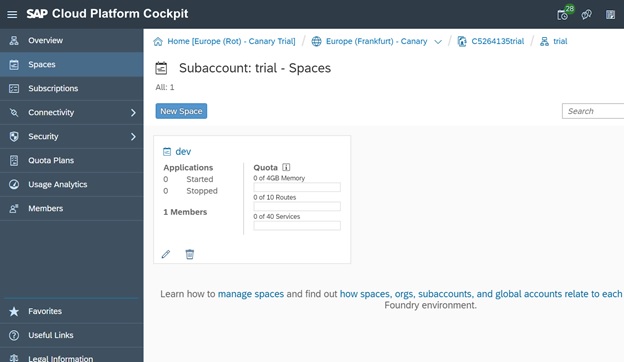 Step 06: Click on the newly space created and select Service Marketplace and scroll down to MultiChain and click to open it as shown below: 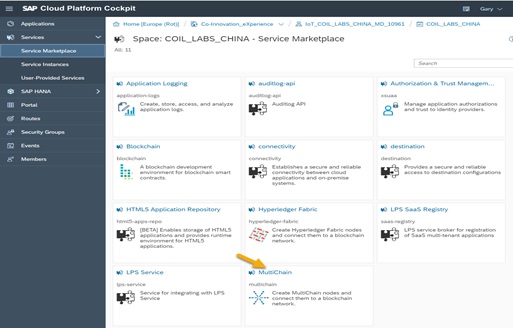 trying to follow your instructions in step 01, but none of the three sites seem reachable from the US. are these services restricted to only certain geo's?

This site can’t be reached

accounttrial.int.sap.hana.ondemand.com took too long to respond.

This site can’t be reached

ism.int.sap.hana.ondemand.com took too long to respond.

Well this is something that should not happen.
You can try this link: https://account.hanatrial.ondemand.com/#/home/welcome

Let me know if these links are working for you or not.

The links that I've added in my blog works fine for me(EMEA/ India).

Thank you for responding, but it seems that my id does not have access to anything with 'Canary' in its name, so maybe it's only accessible internally within SAP firewall. in any event, when going to another Frankfurt site in the hopes of following your step 03, I get this message:

This global account does not yet have any subaccounts with an active Cloud Foundry environment.

maybe, it would be easier to put a disclaimer on top of your blog saying that for certain trial accounts your instructions may not be applicable. in any event, everyone enjoy the multichain tile if they can use it.

Great work, was able to successfully set up the environment and now ready for kick-off.

However had to pay some fees 🙂