Here’s an unheralded occasion. 2018 marks the 100th anniversary of the Value Added Tax (VAT). The idea of a VAT was conceived by Dr. Wilhelm von Siemens in 1918. A century later, this tax—which was envisioned as an efficient and easy way to calculate and collect revenue based on economic growth, along with Goods and Services Taxes (GST)—is now operating in 140 countries.

Apart from customs tariffs on international trade, these two primary components of indirect taxation (as opposed to direct or income-based tax) are emerging as standards for national revenue participation in global economic exchange. VAT is growing in complexity as the traditional goods and services model is joined by digital products, virtual consumption, and multi-threaded international trade flow.

A series of rapid changes in economic entity registration, audit, digital reporting, and compliance requirements issued by leading tax authorities have served to increase the complexity of financial management and reporting. Businesses are compelled to respond to these changes and must remain compliant with each new requirement. Some of these changes emerge with very little notice as the indirect tax domain becomes a larger and more pervasive area of government revenue and business focus.

The Proliferation of Indirect Taxes

Although corporate income tax rates are being lowered in markets such as the US, VAT, GST, and sales tax rates are generally increasing around the world. Federal authorities understand that taxing transactions can raise more revenue than taxing corporate profit alone. Profit tax regimes are also subject to varying interpretations of applicability and rate and rule manipulation.

As the global tax base for economic exchange expands to virtual commerce, the scope for indirect taxation is extended and government revenues will grow accordingly. With Brazil’s Nota Fiscal Eletronica as an early example of comprehensive electronic VAT administration, it comes as no surprise that other major economies are adding or reinvigorating their traditional VAT and GST regimes.

Since 2017, countries including India have instituted major economic reforms by introducing a universal GST to replace a range of inconsistent and uncoordinated tax structures at the national level. Two members of the Gulf Cooperation Council (GCC)—The United Arab Emirates and Saudi Arabia—have also introduced VAT. Other GCC member states will follow suit in 2019.

Malaysia, on the other hand, is replacing its customary GST structure with a revised sales and services tax schedule. China continues its tax reform (under the “Golden Tax” program) and has completed a transition from business taxes on services to a comprehensive VAT regime.

When commercial enterprises prepare for VAT and GST calculation, reporting and payment, they understand that indirect taxation is a comprehensive and continuous financial management process. Necessary resources should be devoted to mapping the company’s value chain through all markets of operation. Effective changes in economic patterns, transaction flows, and trade volume must be anticipated and planned. Businesses should examine the sources of tax relevant data, tax calculation and payment histories, and prepare for the overall financial impact of new VAT and GST requirements.

Taxation for a Digital Economy

In 2003, the European Union (EU) introduced legislation to tax the digital exchange of value. The resulting taxation required non-EU headquartered businesses that provide digital services to consumers in EU member states to register in the VAT system and to charge VAT based on customer location. In the first few years of implementation, foreign businesses were slow to comply with these requirements. However, the EU set what has become a standard for the taxation of ‘online commerce’ that has since inspired similar requirements in other markets.

The digital VAT trend includes territories in Asia and the Pacific, with Australia introducing a ‘Netflix’ tax in 2017, along with New Zealand, South Korea, and Taiwan. Singapore has announced similar intentions to tax digital services. Many new challenges for digital international businesses arise in these circumstances, including the requirements to identify customers by location; calculating, charging and collecting the appropriate tax rates on this basis; meeting local invoicing (e-invoicing) data requirements; and making correct and timely payments in foreign currencies.

Electronic Tax Compliance Across the World 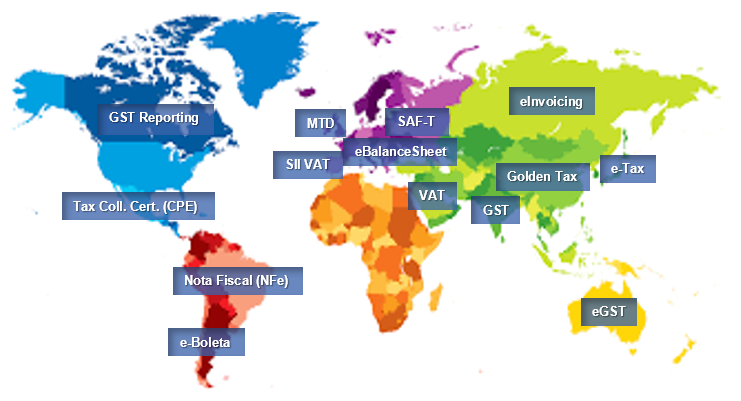 Some authorities have established real-time validation of invoice data. In Argentina, for example, an .XML file of each invoice is sent to the tax authority by the payer requesting an electronic authorization code. A corollary process involves the mandatory submission of tax information—already operating in Poland—through Standard Audit Files for Tax (SAF-T). The fact is that data capture and reporting formats in these country-specific systems are not standardized. Report content requirements differ by country and filing frequencies range from quarterly or annual reports in some places to on-request or audit-related disclosures.

Numerous tax authorities are engaged in advanced filing data analytics, searching for omissions, inconsistencies and errors to prepare tax assessments and to issue penalties. For example, federal authorities compare filing data to match customers’ claims for tax paid on purchases against their suppliers’ declared tax on the related sales. This process has become part of the standard tax administration process in India and in Spain.

With the emerging pattern of digital VAT and GST filing, filers will need to rely on the quality and integrity of the data that tax authorities have access to. Businesses should verify the completeness and accuracy of financial master data to drive tax determination and analyze historic transactions to uncover and repair any systematic errors.

Expanding the Role of Economic ‘Nexus’

In addition to the international digital services taxation trend, the sales tax authority over traditional goods supplied from outside a jurisdiction via online commerce is also under revision. The ‘Wayfair’ decision by the US Supreme Court is a recent case in point. On June 21, 2018, in a 5-4 decision, the US Supreme Court ruled on the case of South Dakota v. Wayfair, Inc. This case involved US state sales and use tax ‘nexus’ standards.

Prior to bringing this appeal before the US Supreme Court, the Supreme Court of South Dakota had previously held that a law requiring out-of-state sellers to collect sales tax on sales made in the state was unconstitutional as it violated the ‘physical presence’ requirement for retailers established as part of the ruling in Quill Corp. v. North Dakota (1992). That is, a business must occupy at least one building in a given state to register and charge sales taxes on customers located in that state.

The US Supreme Court decision in ‘Wayfair’ changed this rule, allowing individual states to require remote sellers that receive annual revenue above a stated threshold (or ‘nexus’) from customers in the state to register and charge sales taxes at applicable rates. This change is in line with the current ‘distance selling’ sales tax rules in the EU.

The new US sales and use tax nexus standard invited tax amendments across the fifty states. Each state government is free to apply its own in-state revenue thresholds for out-of-state (including non-US headquartered) sellers. A review of transactions in US jurisdictions in which companies do not have a physical presence against the prevailing economic nexus rules must be completed along with ongoing sales tax compliance fulfillment.

As with the assignment and validation of VAT and GST numbers from customers in applicable markets, businesses with US customers should also evaluate rule changes for sales tax exemption certificates.

Excellent overview of the current global indirect tax changes for our organization. Thank you for unpacking these so clearly!