In this post, I think about the tools we use in our day-to-day activities, the feeling I have that I’m just scratching the surface with regards to their capabilities, and what I plan to do about it in 2019.

Last week I found myself installing a Vim plugin in order to use a key feature, in an attempt to streamline my editing workflow. I ended up being slightly underwhelmed with the improvements, but on reflection, that was down to the fact that I didn’t take the time to read the documentation and learn properly how to use the plugin. So I ended up slightly worse off from a workflow perspective, with extra mental and software logistics baggage (I now had another plugin to think about and keep up to date) on top. This only added to the feeling that I’ve no idea what I’m doing.

I tweeted my thoughts at the time, and they seemed to resonate with folks: 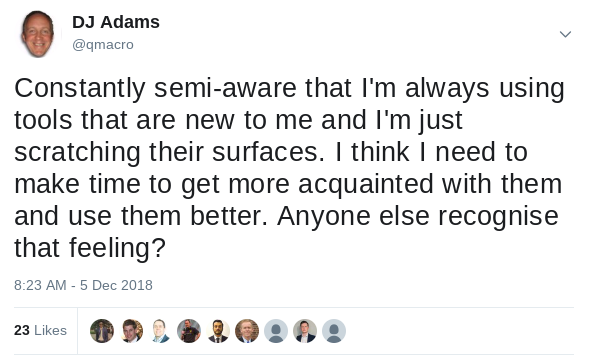 While Vim itself is not new to me, many plugins are, so even within the context of something that is familiar, I have the feeling that my use of tools is superficial at most. Moreover, I remain a “moderately advanced beginner” even at Vim itself. That’s partly because most people anyway only tend to use 10% of Vim’s power*, and partly because I oscillate, or perhaps vacillate, between different editors and IDEs anyway – sometimes because of context (for example I’ll use SAP Web IDE for the super features it offers with respect to UI5 development) and sometimes simply because I’m fickle and attracted to shiny things.

This latter reason is why I also use Visual Studio Code, which has turned out to be a very accomplished and pleasant environment indeed, and of course for which there is an excellent extension for SAP’s Cloud Application Programming Model. See “Set up VS Code on Chrome OS for local Application Programming Model development” for more details on this.

*I didn’t make that statistic up, but I suspect that the person who wrote that (which is where I got it from) might have done.

The feeling that I’m only just scratching the surface of tools extends beyond editors. For example, I have used a variety of HTTP client tools over the years. I started my HTTP journey when I was a big Perl user, and the GET and POST command-line tools that came as part of the venerable libwww-Perl (LWP) package (they were just symbolic links to the lwp-request script) were my go-to tools for making HTTP calls. 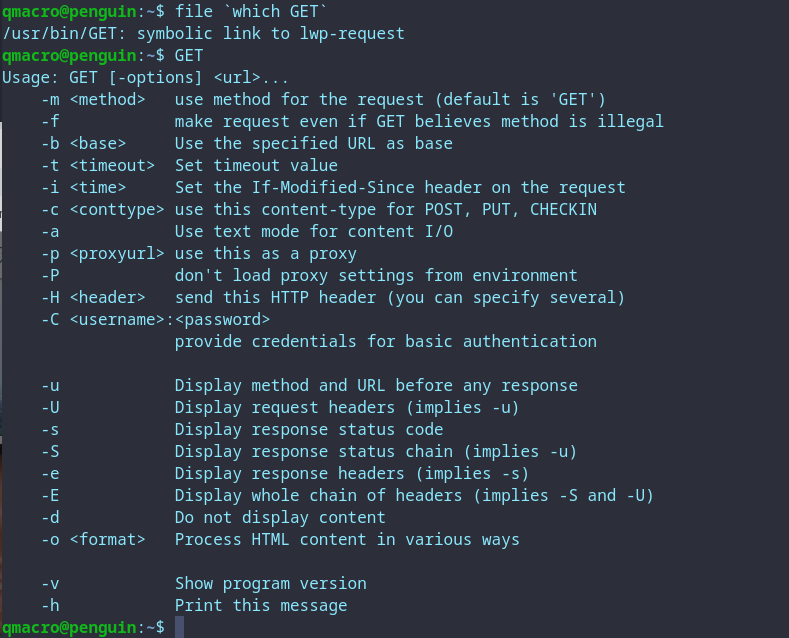 Of course since then I’ve discovered the perhaps now equally venerable cURL, but I also use GNU’s wget (which I extended in script space at one stage – see this post “ETag-enabled wget” from 2002). So in the same way that I flit between editors, I switch also between HTTP client tools, and invariably have to look up even basic parameters and switches because they differ from tool to tool.

More recently I’ve been embracing Cloud Foundry on SAP Cloud Platform, creating & managing service instances and deploying applications as one does. I’ve been doing this mostly through the SAP Cloud Platform Cockpit (the performance of which has improved nicely recently) which is very comfortable, but a month or two back I dusted off the command line tool ‘cf’ which I’d downloaded and tried out briefly earlier this year.

I knew in theory that everything I was doing in the Cockpit I could do with the command line tool, so I started to perform basic activities from the shell. But even today I know that my use of ‘cf’ is limited, and so is my knowledge.

Related to the ‘cf’ command and the artefacts one manages with it, I’m also acutely aware that while I can get by with a high level understanding of VCAP_SERVICES, I really don’t know that much about how environmental variables are really managed in this environment, and I should (or want to) have a much better understanding.

And what about actual programming? Well, there are languages and frameworks that immediately come to mind. Yesterday I was helping out at Manchester CoderDojo teaching some JavaScript to some youngsters (and enjoying the delight on their faces when they solved some simple cryptography puzzles programmatically). We managed to solve the puzzles using some basic procedural approaches, and even managed to talk about functional approaches, contrasting what we’d written with how else the problem (or solution) might be expressed.

We finished the session with me showing them a short, single expression solution to another puzzle. I got them to take it home and research how it works, knowing that they’d uncover depths of wonder that we didn’t have time for during the day yesterday:

(Those following this year’s excellent Advent of Code series may recognise this as a solution to the first puzzle on Day 1).

I’d love to be able to do this with Python too – I know Python and can certainly survive, and at one stage was able to enjoy speaking various dialects and styles, but not any more. This feeling extends to other languages that I’ve used in the past, too.

I have similar experiences with frameworks such as the Cloud Application Programming Model. While I understand quite a lot of the basics, there are depths I have not yet had time to explore, so I feel I am just scratching the surface of possibilities, especially when it comes to the rich & expressive Core Data & Services (CDS) Language.

It’s not as if there isn’t information out there on the subjects I’ve mentioned in this post. Far from it – there’s almost too much. But that’s a nice problem to have. So in terms of the core ingredients that are needed to improve one’s knowledge in a given area, that’s one covered already. Another key ingredient is time. Time to think about what to improve on, time to choose the areas of focus. Time to sift through the mountains of content out there, working out what’s relevant and what’s not, what’s contemporary and what’s out of date, and what works best for consumption (documentation, blog posts, videos, and so on). And time to actually start consuming that information and putting what one’s learned into practice.

I’ve already started. For example, I’ve been watching YouTube videos on Vim and my chosen plugins already, and can feel the bewilderment and panic start to subside, ever so slightly, as I learn more about what I’m trying to use on a daily basis. I’m not yet happy with the amount of time I’m dedicating to practising, but my plan is to overlay a path on top of the rest of my activities in 2019, focusing in week long chunks on certain topics. Over the next two weeks I will sketch out that path, so I won’t be constantly making and changing decisions along the way.

I’m not sure how I’ll fare, but that’s my intention, at least. One underlying philosophy that I’ve just realised is permeating this intention (it took me over a thousands words in this blog post to actually realise it) is that I want to avoid, as far as possible, learning new subjects, and instead concentrate on improving my knowledge in existing subjects. I’ve found that in my years in the SAP ecosphere there are peaks and troughs, of broad then deep periods. I’ve gone as broad as I should this year, so next year I want to at least be consciously influencing a return to depth.

This post was brought to you by the happy feeling of a good run this morning, by a nice cup of Pact Coffee’s La Concepcion and the calming purple tones of my Dracula themed desktop.