The new version of the SAP S/4HANA Cloud SDK Java libraries is available since today. You can update your dependencies to version 2.8.1 and consume the new version from Maven Central. We have also released version v14 of our out-of-the-box continuous delivery offering consisting of a ready-made Jenkins server and a complete delivery toolkit.
In this blog post, we will walk you through the highlights of these releases. For a complete overview, visit our release notes for the Java libraries and for the continuous delivery toolkit. The release notes also include the change log of all our releases so far.
At the end of the article, you will find a set of instructions on how to update to the new versions.

The SAP S/4HANA Cloud SDK relieves you of worrying about connectivity and authentication when accessing other systems such as SAP S/4HANA. Based on the destination service of SAP Cloud Platform, the SDK provides abstractions such as the HttpClientAccessor which handles lower level infrastructure requirements for HTTP requests. Those abstractions are also used under the hood in the Java virtual data model (VDM) for accessing OData services. Already before version 2.8.1, the SDK handled various authentication types such as basic authentication and OAuth2 SAML Bearer Flow.

Version 2.8.1 introduces support for the OAuth2 Client Credentials flow as an additional authentication type. This flow is often used when the application acts as a client to a service for which it previously received authorization. If you have defined a destination to use OAuth2 Client Credentials like shown below and provided the required information, you can now use the mentioned capabilities of the SDK which will take care of the authentication. The SDK abstractions also ensure that the same code works on Cloud Foundry and Neo. 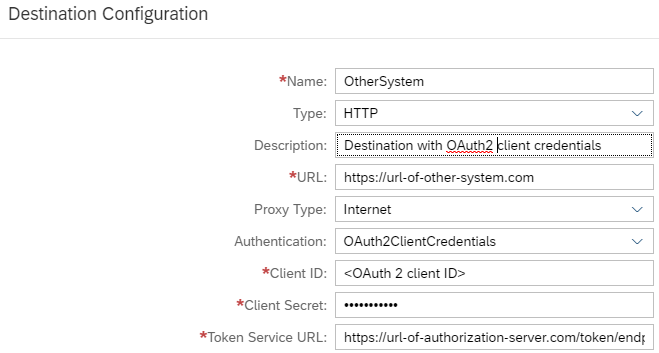 The Java VDM generator for creating OData clients now supports function imports that return a primitive type or that do not have a return value.

Version 2.8.1 also fixes an issue with the scp-cf-spring archetype that led to failures in generated projects when running tests with Java 11. If you have already generated your project and experience issues with Java 11, reverse the order of dependencies in the dependency management section of your root project. The com.sap.cloud.s4hana:sdk-bom dependency should afterwards be listed first, spring-boot-dependencies second.

Clean up of Jenkins plugins

We have cleaned up the list of Jenkins plugins bundled in the Jenkins server of the Continuous Delivery Toolkit. This reduces the size of the Jenkins master image by 40% (400 MB), also speeding up the start time of Jenkins. However, this only applies to newly created instances of the continuous delivery server cx-server. The update to v14 will not delete plugins in existing instances automatically.

We recommend to remove all installed plugins with a command such as docker exec -it s4sdk-jenkins-master rm -rf /var/jenkins_home/plugins/*. Afterwards, run cx-server stop, cx-server remove and cx-server start. If you had installed additional plugins yourself which you still need, reinstall them afterwards.

The continuous delivery pipeline now keeps old instances of your application after a productive blue-green deployment on Cloud Foundry, instead of deleting them. The old instances are stopped so that they do not consume memory. You can then restart the instances if needed.

When creating a backup with cx-server backup, the script will abort the backup if there is not enough space left on the machine.

You can find further details on these fixes and improvements in the complete release notes.

You can now recompile your project (be aware of the compatibility notes, though) and leverage the new features of the SAP S/4HANA Cloud SDK in version 2.8.1.

Of course, you can also generate a new project that uses version 2.8.1 from the start by running the Maven archetypes for Neo or Cloud Foundry with -DarchetypeVersion=2.8.1 (or RELEASE).

If you are using the pipeline with a fixed version (as recommended since v7), update the continuous delivery toolkit with the following command, that you run on the server hosting the cx-server: