TL, DR: Learn more about how SAP is creating a positive impact on Technology in Education, and how we are honoring our commitment to the UN 17 SDGs, specifically #4. Quality Education and #5. Gender Equality in nurturing our citizens of tomorrow on the UN 17 SDG site on SAP.com

Recently, I had the privilege of undertaking a volunteering assignment as a FIRST® LEGO® League Coach for elementary and middle-schoolers.

Those familiar with the FLL will attest to the rigor and discipline involved in preparation, teamwork and collaboration to accomplish the goal that FLL sets as part of their annual global competition.

As in prior years, this year’s FLL assignment consisted of 3 parts:

Almost all of us, including the Coaches, were rookies, i.e., new to the FLL, so there was a lot of learning. We discovered that the FLL assignment actually closely resembled real-world projects and programs. As we, the coaches pondered upon this, we asked ourselves- why not run this like a real-life “program” and integrate aspects from the workplace?

Moreover, why not subtly expose the kids to a first-hand experience of the tools and enablers that technologists use in real life? For one, the kids would benefit from real-world concepts and skills early on. Additionally, they might also find it fun if we pulled it off the right way.

So, how did we go about it?

Specifically on #2- Submitting an innovative idea, the kids pored over a multitude of resources including YouTube, space journals, Canadian and American space agency websites to research for ideas that would improve the quality of life for humankind in space. Well, we utilized available tools and enablers such as design thinking processes, and design/prototyping software before building working prototypes.

Taking a cue from Hasso Plattner’s innovative work popularized at Stanford d.school, the coaches encouraged the kids to ideate and iterate over various designs, shortlisting the most popular, and viable solutions, using a simplified Design Thinking process.

Ideation and the Eureka moment: With private ventures like SpaceX® and Blue Origins® opening up space travel to civilians, the kids proposed focusing on affordable innovation ideas that would serve a dual purpose:

Enriching experiences during space travel and exploration, but also benefiting humankind back on earth.

After iterating over various ideas, and employing even a “Science Fiction Thinking” process, the FLL team, consisting of 5 boys & 3 girls, shortlisted the concept of a portable containment device that would allow space travelers to better handle objects. Why was this even relevant? Objects float away in low or no-gravity conditions such as inside a spacecraft, so a contained space would allow space travelers and astronauts better control, avoiding objects from impeding the operation of sensitive equipment, risking systems failure.

When traveling in space, why would I want to be deprived of my favorite snack, my favorite toy (in this case LEGO® bricks, or PlayDoh®….How serendipitous!) or other miscellaneous accoutrements (think of grooming accessories)?

What if there were a portable containment device? The design could be similar to that of the containment chambers that astronauts use to handle hazardous material. But what if we made it portable, simpler and consumer-grade? The idea struck, however, we wanted a quick and fast way to design and simulate digital models.

We figured why not consider SAP software in early prototyping, design & simulation of physical objects? This would give the kids a real-world view of tools used at the workplace. In partnership with SAP, we looked at such solutions as SAP Engineering Control Center & SAP 3D Visual Enterprise so we could captivate these young students’ interest in the business world.

About SAP 3D Visual Enterprise: SAP 3D Visual Enterprise is an SAP technology platform that enables the visualization of engineering data throughout your enterprise and supply chain by automatically taking your CAD Master data and making an ultra-lightweight digital twin. The generated lightweight digital twin file can be stored anywhere on your network or as document originals inside of SAP ECC.

Convenient access to SAP Demo Cloud and SAP 3D Visual Enterprise helped create and simulate “Digital Twin” models in a matter of minutes so the kids could visualize in multiple dimensions, before attempting physical prototypes. 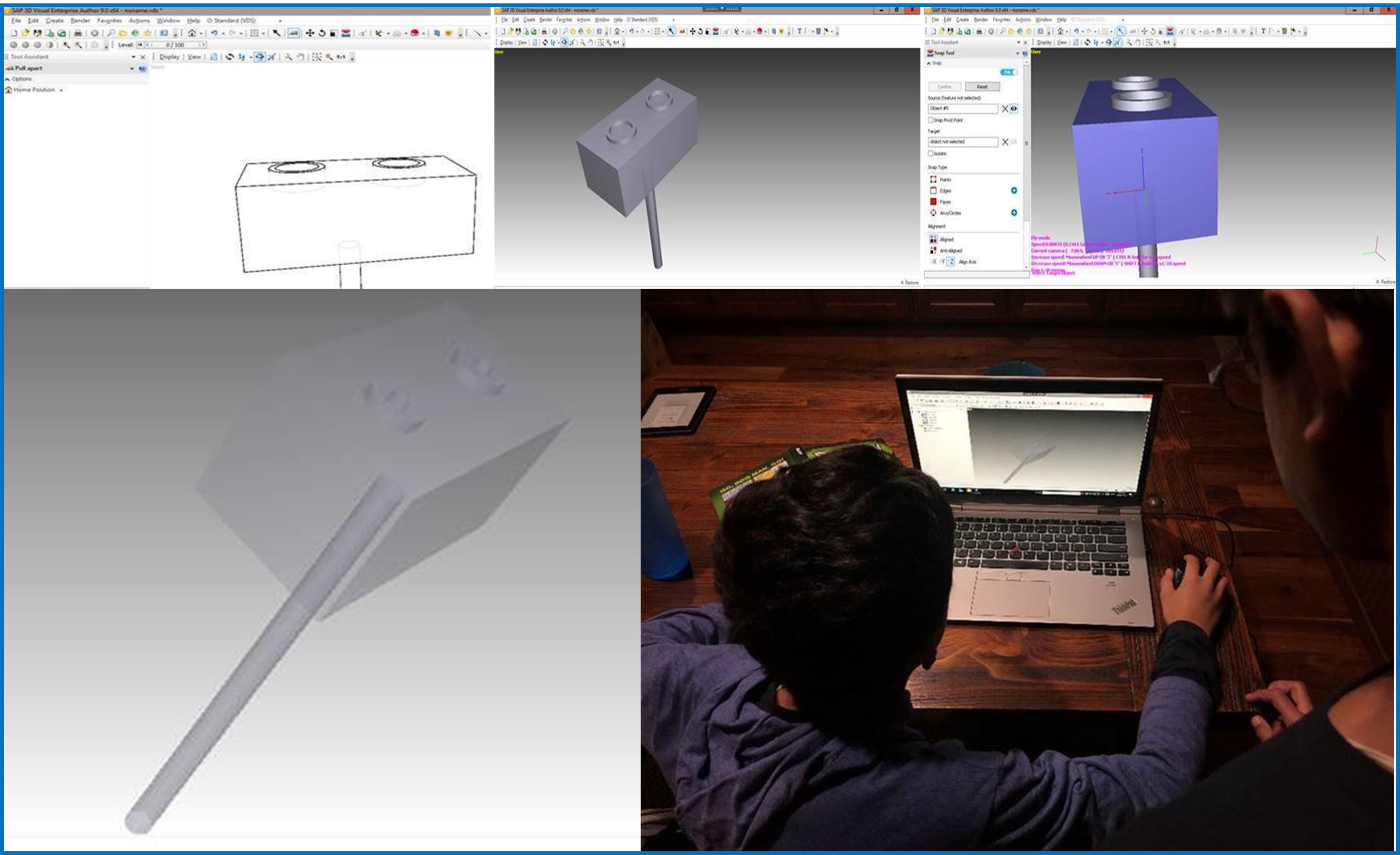 Although a physical prototype is not mandatory for the FLL, the kids were stoked and keen on experimenting iteratively. The final design was a consumer-grade, portable, collapsible chamber allowing space tourists to open a snack bag, or say a tin of breath mints, avoiding “float-aways”. The same design could be used for playtime, with say LEGO® bricks or PlayDoh®.

The same design allowed simple grooming, such as taking care of your nails without the fear of grooming equipment floating away risking system failure inside of the spacecraft. Features such as Velcro®-like and magnetic surfaces, double-sided sticky tape, et al, to secure objects, along with an optional vacuum feature were soon added.

The team also found practical uses for the same design on Earth. If you’ve dabbled with PlayDoh®, you will recall the mess dried-up PlayDoh® can leave on a carpet! Wouldn’t this be of tremendous benefit, especially to parents of young kids?

The same design could also benefit people with Essential Tremors, a condition that limits fine motor function among children and adults alike. The design would benefit affected individuals so they could handle PlayDoh®, or assemble LEGO® bricks, aside from other pursuits by containing objects inside the “workbench” without fear of dropping them.

The team also presented the concept to Astronaut Barbara Morgan at the Kennedy Space Center in Florida, incorporating invaluable feedback into the design. 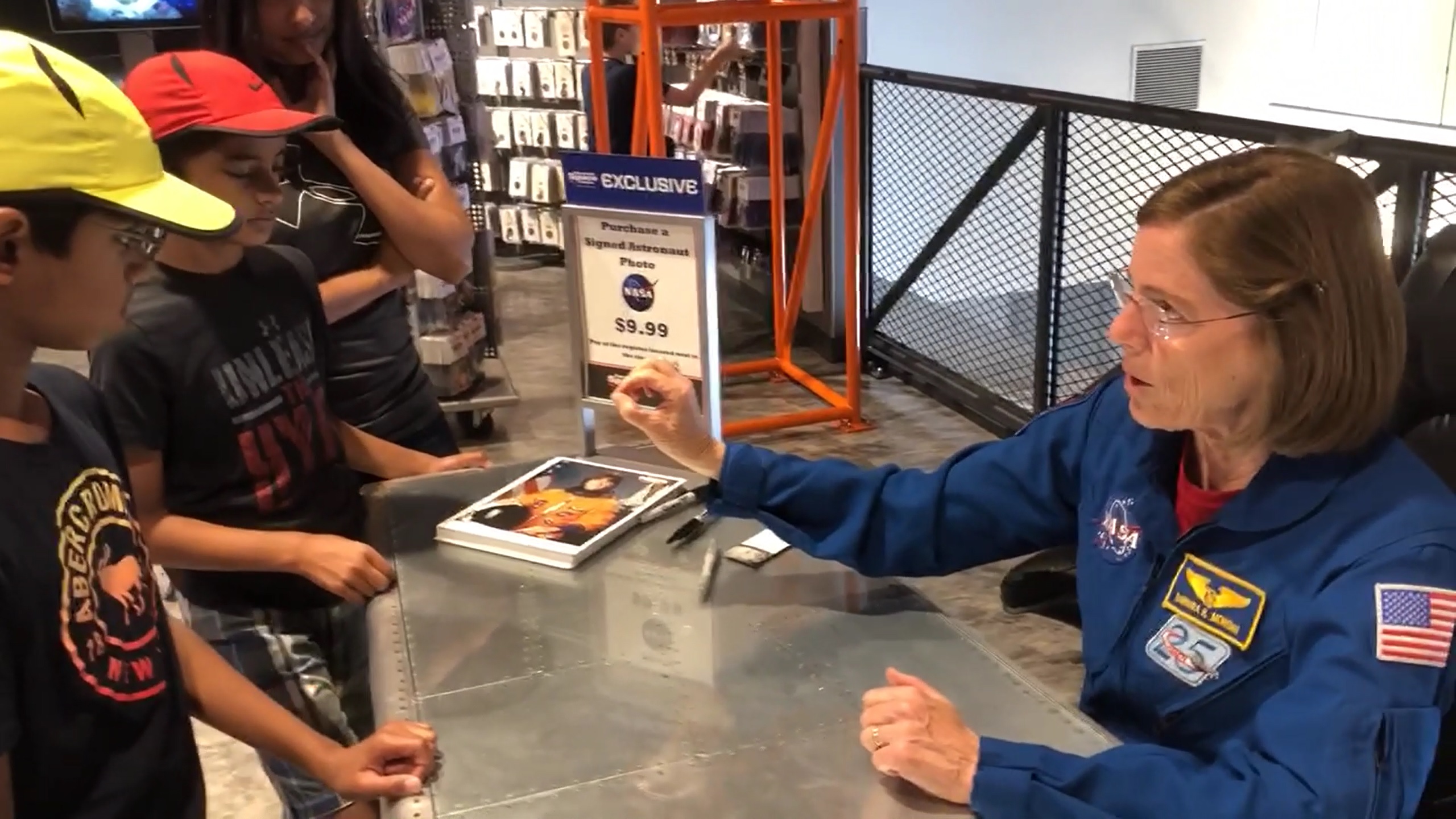 Additionally, the team also presented to two classrooms, industrial and computer science engineers, product designers and a physician, to incorporate feedback from early focus groups into the final design.

Upon simulating and perfecting the design using SAP 3D Visual Enterprise, the team executed the prototype, calling it “Latchy Catchy” – so things don’t float away!!

Watch this space for more details on the actual design and physical prototype!!

Eventually, the team went ahead to present the “Latchy Catchy” to FLL Judges on 12/01/2018, and was selected to the Regional Semi-Finals in Washington during the Qualifiers. The team also won the “Strategy & Innovation” Award for a unique design and an innovative approach to solving problems. 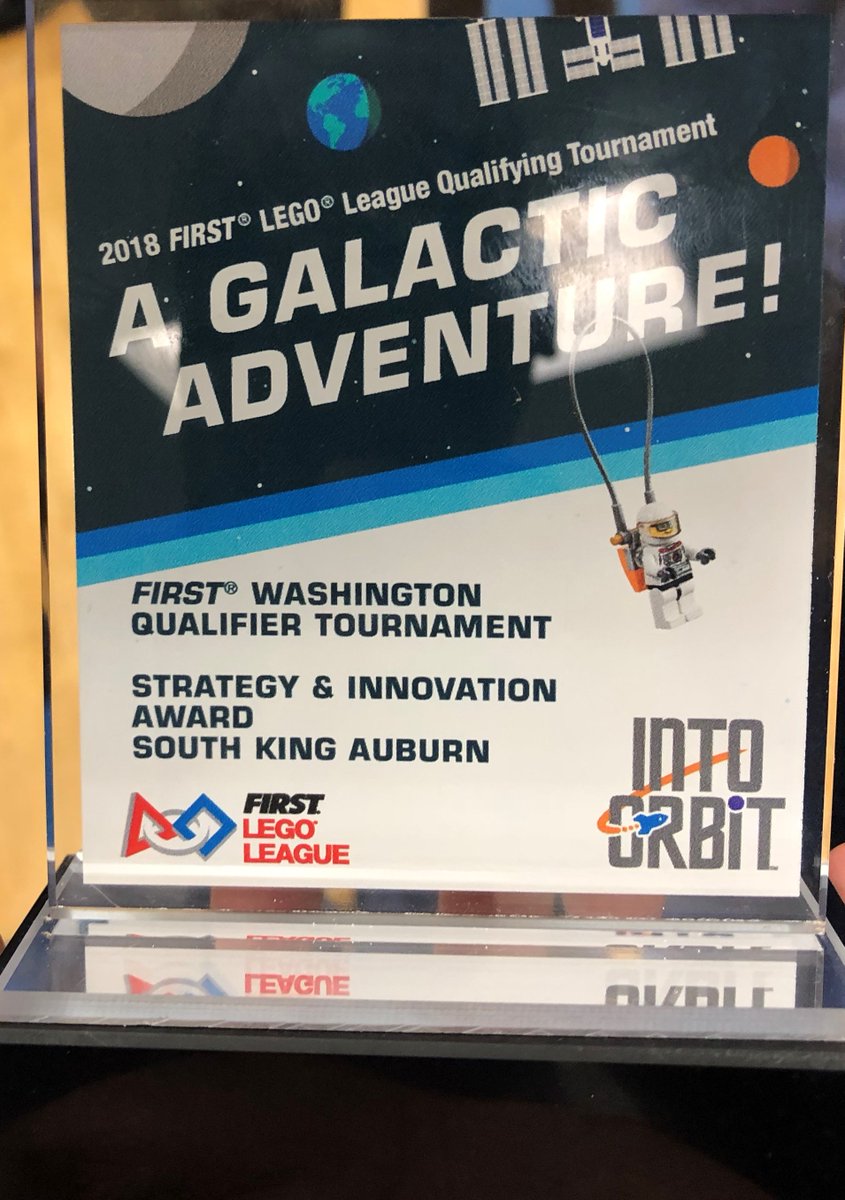 So, what’s the net of all of this?

We believe that corporations can serve a greater purpose by affecting positive change such as ensuring Quality Education and Gender Equality, by engaging all genders equally in such initiatives as FIRST® LEGO® League, Girls Who Code, SAP SuccessFactors Girls in Tech, GIRLsmart4tech (supported by University of British Columbia, SAP and Microsoft).

Most importantly,  I came away with rich learnings, patience and perseverance, as well as a renewed appreciation for our academic community.

For more information about SAP’s Corporate Social Responsibility initiatives and our support of the UN 17 SDGs under our SAP NextGen program, please visit our websites at www.sap.com/csr, and SAP NextGen. We encourage and invite our customers to collaborate with us and affect positive change in our communities through our SAP NextGen program and the SAP MaxAttention NextGen Salon

About the FIRST LEGO League

The FIRST LEGO League (FLL) is an international competition designed to inspire young scientists in the fields of science and technology. In 1998, the American FIRST corporation and the LEGO group joined forces to initiate this competition. More than 40,000 teams participate worldwide with over 320,000 children and teenagers between nine and 16 years.

FIRST LEGO League has been a fixed part of SAP’s social responsibility framework since 2003. The company has supplied each SAP team with a robot set and the robot game field and covers their participation fees and parts of travel expenses. In 2015, SAP supported 94 teams from Germany, Bulgaria, Hungary, Poland, Slovakia, Austria, and Switzerland. Three of them qualified for the FLL Open European Finals in Spain, and one qualified for the FLL World Festival in St. Louis, USA.

Additional trivia: Around 200 SAP employees in seven countries assisted some 800 children during the 2015/16 season.

Gender Diversity and Technology in Education at SAP

Note: All product names, logos, and brands are property of their respective owners. All company, product and service names used in this website are for identification purposes only.