This blog describes how to configure a scenario where an XI sender adapter consumes messages for multiple interfaces and the routes them to different branches in the integration flow. This configuration option uses the headers set by the XI sender adapter.

The blog Configuring Scenario Using the XI Sender Adapter describes how to use the XI sender adapter in an EO scenario that receives messages from a sender backend using XI protocol. In general, the XI sender can receive all kind of XI messages for multiple interfaces and for multiple sender business systems and parties. Often there is a requirement to process messages for different interfaces or business systems differently. This can easily be achieved by using the headers the XI sender adapter sets for all these attributes received.

In this blog I describe how to extend the scenario described in the blog Configuring Scenario Using the XI Sender Adapter with the option to route the received messages to different branches depending on the interface. The straight forward integration flow configured in the linked blog looks like this:

We will extend it with a routing of the messages to different receiver systems based on the interface.

To allow the headers that you want to use for the routing configuration, you first need to know which headers are set by the XI sender adapter. This is documented in the following help chapter: Headers and Exchange Properties Provided by the Integration Framework. Here’s a short list for your reference:

For my scenario I only allow the headers SapInterfaceName and SapInterfaceNamespace because I want to configure a routing based on the interface. The single headers have to be separated by ‘|’.

Note that you can also set * in this field to allow all headers received from the sender system or set by the adapter, but this is not the recommended configuration option. For security reasons you should only allow the headers that are really required.

Now I can use the headers to configure my routing to different receivers.

Add Router to Different Receivers Based on the Interface

To configure the routing to different receivers, I add a Router step after the Start step and a second End event with an additional Receiver. To end messages for all other interfaces, I additionally add an Escalation End event and connect the router to the two new end events:

I configure the route to the first receiver for the interface FlightBookingOrderConfirmation_Out and the namespace http://sap.com/xi/XI/Demo/Airline. For this, I define a Non-XML expression based on the two headers: ${header.SapInterfaceName} = ‘FlightBookingOrderConfirmation_Out’ and ${header.SapInterfaceNamespace} = ‘http://sap.com/xi/XI/Demo/Airline’

With this configuration, all messages received with the interface FlightBookingOrderConfirmation_Out are routed to Receiver1.

I configure the route to the second receiver for the interface XiPatternInterface2_Out and the namespace http://sap.com/xi/XI/System/Patterns. For this, I define a Non-XML expression based on the two headers: ${header.SapInterfaceName} = ‘XiPatternInterface2_Out’ and ${header.SapInterfaceNamespace} = ‘http://sap.com/xi/XI/System/Patterns’

With this configuration, all messages received with the interface XiPatternInterface2_Out are routed to Receiver2.

To end messages for all other interfaces, I define the route to the Escalation End event as Default Route:

With this configuration, all messages received with an interface other than FlightBookingOrderConfirmation_Out  or XiPatternInterface2_Out are not processed by the integration flow.

Configure the new receiver. I simply use an SFTP adapter and store the message in a different directory.

As described in the blog Configuring Scenario Using the XI Sender Adapter, you need to configure the sender system to send XI messages to the Cloud Integration tenant.

Make sure you configure the Local Integration Engine, the SLD, and the RFC destination as described in the blog Configuring Scenario Using the XI Sender Adapter.

With this, the system can send XI proxy calls for the interfaces FlightBookingOrderConfirmation_Out and XiPatternInterface2_Out to the Cloud Integration tenant.

The easiest way to test the scenario is to use transaction SPROXY to trigger the sending of XI messages for the different interfaces. 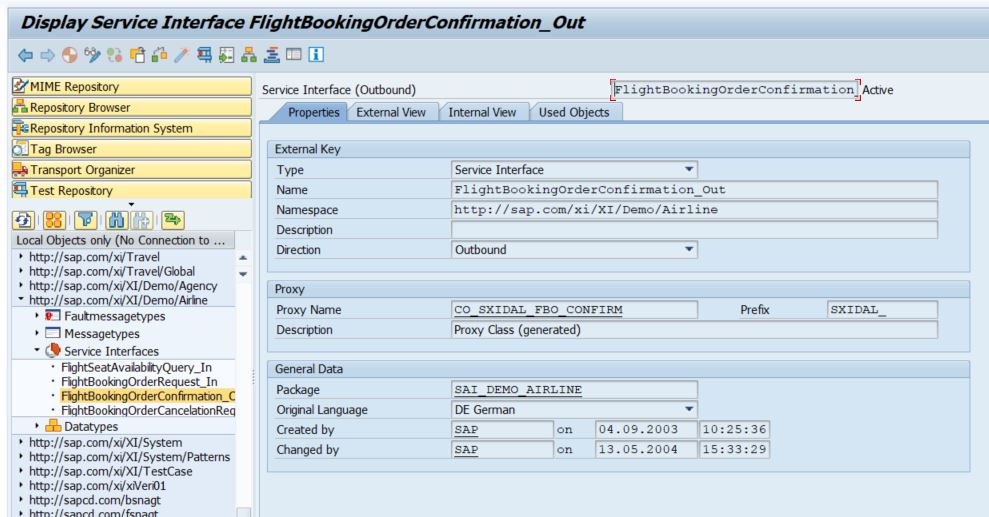 In the menu, choose Proxy -> Test. In the Test Service Consumer dialog leave the settings as they are and choose Execute:

A screen with a sample test message opens. Choose Execute and then Extras -> Trigger Commit Work. The request is sent to the Cloud Integration tenant. You can now monitor the processing as described in the next section.

Message processing can be checked in detail in the section Monitor Message Processing. Select the message you sent and check the processing status.

If you send messages for the interfaces FlightBookingOrderConfirmation_Out and XiPatternInterface2_Out, the messages should be processed and sent to the different directories on the SFTP server.

If you send a message for a different interface, the message gets an Escalated status and is not processed to the SFTP adapter: 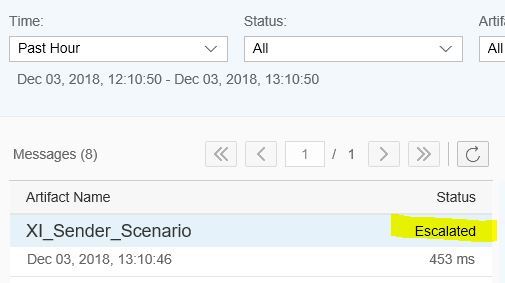 In addition to the message monitoring, you can trace the message processing to see the route the message took. Activate Log Level ‘Debug’ or Trace’ in the Integration Content monitor. After activating the log level, send a message and check the trace in the Message Monitor using the Debug or Trace link for the message.

In the Trace view you see which route was taken. For example, if a message for interface XiPatternInterface2_Out was sent, Route 2 is executed:

If a message is sent for an interface that is not configured, the process is executed to the Escalated End event:

Is this the only way available to send multiple interfaces from a backend (Eg.ECC) to CPI? This seems to create a lot of dependency on a single iflow and may result in regression for each change in terms of adding a new message type.

You can also create single integration flows for each interface. But then you have to make sure in the sender system that the message is routed to the correct inbound URL.

Why not creating one Iflow per outbound interface? What’s the disadvantage? Of course, on the backend a configuration has to be made for each interface individually. But that's manageable.

With this the configuration in Cloud Integration is more separated because different integration flows can be handled independently.

Thank you for this blog.

I have created a similar scenario XI sender to SOAP receiver scenario in CPI.

In the XI adapter settings the QoS is BestEffort.

Now when I am sending the payload from Postman to my XI_sender adapter ,

Inbound processing in endpoint at /SendXIMessage failed with message "Fault:Quality Of Service not set in the message. This is not an XI message"

Can you please let me know why this issue is coming? I have already set the QoS there.

usually an XI sender system offers the qos setting in the xi message header. Please check that you provide all the required XI protocol details via postman, usually this is done by the XI runtime in the sender sysetem.

This is what the settings is for QoS , I feel like this is definitly not correct. 🙂

Can you guide me a here a little bit?

how does the XI message look like that you sent?

Here is the xml payload that I am sending

if you want to send to the XI sender adapter you need to send an XI message, no SOAP message.

Let me give you an example:

And you need to specify the correct content type header, fot this message it would be:

actually not CPI is dependent on the SLD. The problem is that the XI engine in the backend requires the SLD, not the Cloud Integration tenant. So, you may contact the PI/PO colleagues for their suggestion. You may open a ticket on BC-XI-IS-IEN.

Thank you for you answer.

I 'm going to try understand how to use XI Engine with CPI without being a migration.

you have to check the respective backend that want to communicate with XI protocol. For this the XI engine in the backend is required and there currently is a requirement for an SLD. And for options without SLD you may open a ticket on BC-XI-IS-IEN.

I managed to solve this problem.

I wrote a short blog post about this and i hope to help. Thank you!

just to make it clear, not CPI needs the SLD but the XI engine in the backend. And in your blog you describe how to use the XI engine without SLD by adding this specific table entry.

Thank you for sharing,