I have recently started with #100DaysOfCommunityQA(read this blog by Craig) to enhance and share my knowledge with intent of #LearnShareRepeat as correctly pointed out by good friend of mine Srikanth. I still felt i can do increase this learning by challenging myself with more missions, so that is where this idea of #OneDevTutorialMissionAWeek came up. With God’s grace i have completed two missions and this blog talks about my experiences while completing my second mission Take a Deep Dive into OData by DJ Adams. The tutorial is just awesome and flawless, must do for all, well done DJ!

My particular experience happened primarily because of the different cloud foundry setup i had. If you remember as SAP has recently launched Function as a Service as beta feature in cloud foundry so i also created two sub accounts to experience the same. The experience is documented here.For some these might be pretty basic issues but for others they are stuck, so i hope it helps them in moving forward.

So scenario is I am trying to make my first OData based backend service and while configuring my WebIde with CloudFoundry in this step the adventure starts. These issues will not happen if you have single default trial account in cloud foundry, i had two accounts one Trial and another BetaFeatures, plus my understanding of them was pretty basic.

Issue 1 – User not able to login to CloudFoundry?

This is most basic one, on clicking CloudFoundry in features tab of WebIDE we get a pop up to enter username and password as shown below. 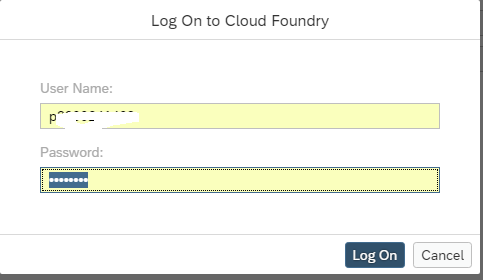 I was trying to use my P user credential and it did not work, thought might be some issue with user id but finally was able to crack it. You need to use your email and password. I spent around 30-45 minutes for such a basic mistake. 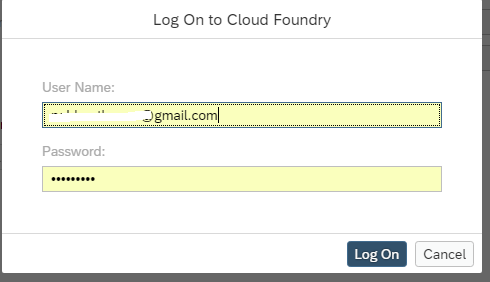 Issue 2 – Not able to install builder in my sub-account trial?

Finally after logging in we have to install the builder as shown below but as always not straightforward it always fail first time.

On looking at the logs got to know, the issue was with Application runtime allocation to the trial space. I have assigned it Zero application run time so assigned the memory for the same and issue was resolved.

Moving on i thought everything is ready, now we are ready to build. Started creating my first project and it does not create it gives error.

I thought let me relook at what space is chosen mostly it is the multiple space issue which i am juggling with till now. Finally found i have installed builder in Trial subaccount and by mistake chosen Beta Feature one. Corrected it and had my first project created now.

Moving on coded as per the tutorial and while building the database faced another challenge, the  built fails with error no HANA database service instance available.

On having a detailed look and cross checking the CloudFoundry entitlements i can see no database instance was assigned to trial and one was assigned to Beta Features. So reassigned it resoled this issue, but ended with another error, read on!

We had a version mismatch error while building the database service as shown below.

The reason was simply the plugin version mismatch. I opened the hidden file ,hdiconfig(view->show hidden files) and modified the version same as needed. Bingo it worked.

Finally my tutorial is complete, hopefully these little learnings might help someone. I will continue with my missions and keep sharing what i have learnt.

Lets end it with Learn->Share->Repeat:)

I faced one issue while uploading data to our table using CSV file/folder during last part of the tutorial. It shows an error regarding JSON parsing. Did you get anything like this?

I did not face this issue.Can you please add some screen shots of the files and error.