This is part two of my blog series on fast data access. I recommend that you read my first blog for an introduction to FDA on IBM Db2. In this 2nd blog, I will now concentrate on the tuning of FDA statements.

An FDA statement with a long average runtime may be a sign of a bad access path chosen by the Db2 optimizer, but it may also indicate that the corresponding ABAP application supplies a large FOR ALL ENTRIES table as input table. So, the first step is to distinguish between those two cases.

In the following, I will use a slightly extended version of my simple ABAP test program from my first blog on FDA . You can play with this test program and run it on any test system that uses FDA for FOR ALL ENTRIES statements.

We already know that the simple statements in this test program are executed well by the Db2 optimizer and the runtime is not influenced by a bad optimizer decision or a missing index.

When using ST05 to trace FDA statements, make sure that you’re using a current DBSL version including the patch from SAP Note 2416250. In addition, you should include the ABAP code fix from SAP Note 2497337 . Otherwise, the ST05 trace entries may be misleading.

If you take an ST05 trace of the test program and filter for table T100, you will find the following aggregated rows. The new ST05 trace (compared to ST05_OLD) shows by default an aggregated view where more details can be displayed on request.

The last two statements in the trace correspond to the FDA statements. The second statement selects only two rows since my test system contains only two languages. Both statements have a relatively high execution time. If you preselect the FDA statements and press the Display Individual Records button as marked above, you can see in more detail where the statements spend their time.

In the Single Records section of the trace, you’ll find several different operation types, some of which are very specific for FDA statements.

Let’s have a closer look at the different steps of the process:

When looking at the SQL cache data, I recommend adding the column Routine Invocations using the Change Layout button in the ALV screen. Applied to our test statements, you may see the following data:

As you can see, the Routine Invocations column roughly contains the number of input tuples of the FDA statement (100,000). Db2 internally counts five additional routine invocations per execution. So you can calculate the average number of rows in the FOR ALL ENTRIES table of the ABAP application with the following formula:

This is very important information for your statement analysis. The formula can be applied in most cases, except for the following where it’s not applicable:

In most cases, FOR ALL ENTRIES statements are not overly complex, the WHERE clause is selective, and a matching index exists that matches the WHERE clause. In exceptional cases where this is not the case, Db2 may decide for a bad access path. There are two main patterns:

A nested loop join is used but there’s not a good index: 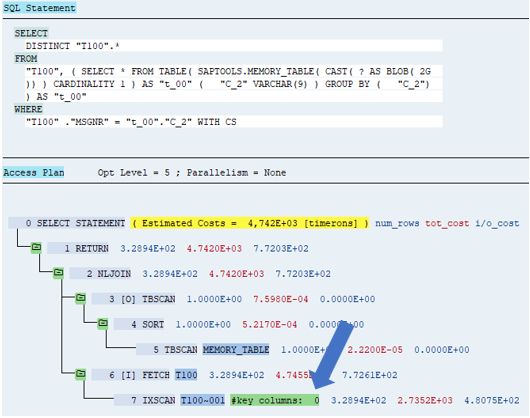 The statement above is artificial, but it demonstrates the problem. In this case, creating an index with column MSGNR as the left most column will help.

MEMORY_TABLE is used as the inner table of a Join: 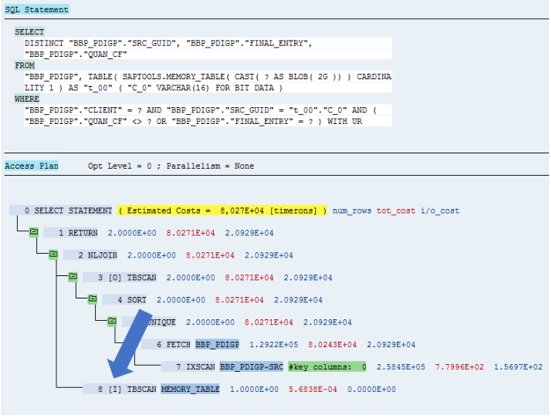 The statement from the screenshot above has been extracted from a customer incident. The access path shows an FDA statement where MEMORY_TABLE is used as the inner table of a nested loop join. In this way, MEMORY_TABLE needs to be executed multiple times and the Routine Invocations count in the SQL cache will explode. Even worse, the used index does not help for the given WHERE clause.

In this case, creating an index with the first columns CLIENT, SRC_GUID and maybe QUAN_CF and FINAL_ENTRY may have helped to get a good access path.

There were also defects in Db2 that resulted in such bad access patterns (see, for example, SAP Note 2338139). If you start with FDA and you’re still using Db2 10.5, you should at least have Fix Pack 8. Since we’re constantly working on improvements for the Db2 engine and the Db2 optimizer, I recommend that you always use the most current versions and Fix Pack levels of Db2.

I encourage you to use FDA on your system. Some of our larger customers already do so with their production systems without problems.

However, there have always been OPEN SQL statements and, in particular, FOR ALL ENTRIES statements that required statement tuning because maybe the use case is customer-specific or the data distribution in the underlying tables is very special, or maybe Db2 does something odd and immediate help is needed. Feel free, of course, to open a customer incident if you need help with tuning your statement. Still, I’d like to briefly sketch existing options in this blogpost.

At prepare time of an FDA statement, the Db2 optimizer cannot know how many rows the MEMORY_TABLE table function will provide. Therefore, it needs to make a default assumption if no other information is provided. The built-in Db2 default for such cases is 1,000 rows. But we found that the optimizer sometimes decided for a hash join too early with this default build. That’s why we currently add a CARDINALITY 1 clause to our FDA statement. This is subject to change in the DBSL with future Db2 versions.

Since we assume here that the MEMORY_TABLE will provide only one row, Db2 favors simple nested loop join access plans. In most of the SAP query cases, this is exactly what we like to see. However, in cases where no good index exists or where the WHERE clause is not selective, a different join method may be better.

If you don’t want to change the ABAP application, the CARDINALITY clause can also be changed with an SAP optimizer profile (SAP Note 2700223).

Adding a GROUP BY clause to the MEMORY_TABLE queries

As described in my first blog, duplicate input tuples contained in the FOR ALL ENTRIES table can be sorted out early. So it’s ok to add a GROUP BY clause around the MEMORY_TABLE function. This is not done in SAP kernel version 7.49 by default. However, since some customers changed this default with good results, we changed the DBSL default with SAP kernel version 7.53.

If your system is running with SAP kernel version 7.49, I suggest you test the following SAP profile parameter setting (see also SAP Note 2675236):

Last resort: Switching off FDA for selected FOR ALL ENTRIES queries

If, for any reason, you encounter a query that cannot be tuned in its FDA form, you can still switch off FDA locally for this query using a DBI hint:

I hope you’ll never see a case like this, but if it happens, we’d like your feedback to enhance the Db2 optimizer in upcoming Db2 Fix Packs and versions. In such a case, please open an incident or message me. Most likely, we will need optimizer information (see SAP Note 83819) for the slow query.

Leave a comment and let me know your thoughts on FDA and if this blogpost helps you.

Thanks for useful informations about FDA.

Is there any Cons. when developers use FDA to process very few data(1 or under 10)  in an internal table ?

When they don't use FDA to process data in an internal table, DB2 will create GENROW temp table instead of MEMORY_TABLE.

Is there any overhead to create and handle MEMORY_TABLE instead of GENROW in Db2 point of view ?

you should not be worried that DB2 needs to allocate 2GB each time SAPTOOLS.MEMORY_TABLE is allocated.

The function does have a locator input parameter. So memory is only allocated as needed. If FDA has only one 1 row of input data, DBSL sends only a tiny BLOB with a few bytes length to the database server.

In 10.5 FP5 this locator attribute has been missing. Therefore DBSl activates FDA only with FP6 and higher.

there is some process invocation overhead for MEMORY_TABLE. However from our test results this can be neglected.

If you do not use FDA for such small internal tables you may have to prepare a new SQL statement with the matching number of tuples in the VALUES clause. This prepare overhead is much larger.

For FDA queries with a very large number of input tuples DB2 may have to write some temp data. However for those queries FDA saves so many network roundtrips that this can be neglected too.