The future of SAP application programming according to TechEd 2018

Last month I had the luck to be able to attend SAP TechED Barcelona. I think there were quite a lot of updates considering the way, how you implement your applications in the future – therefore I would like to share my take-aways now in this blog. As I want to avoid wasting your time, I will focus on the technical stuff and leave out all personal experience considering the travel, location, conference and endless discussions at the hotel bar (beer involved).

As I consider myself mainly as a developer (partly as an architect), my focus on the topics was application development, primary in the area of ABAP. Therefore this blog will contain three major blocks of information for you – if none of them is applicable, you probably should skip this blog:

As you (hopefully) noticed , SAP introduced S/4HANA a few years ago to simplify the data model in order to leverage SAP HANA capabilities. Obviously, this also has a lot of impact on application development and as technology evolves very fast nowadays (like the introduction of FIORI and SAPUI5), the way that you should build your applications is not PBO/PAI anymore. From my point of view, there are three programming models highlighted at TechEd, which are relevant:

The following picture shows use the state-of-the-art considering ABAP development: 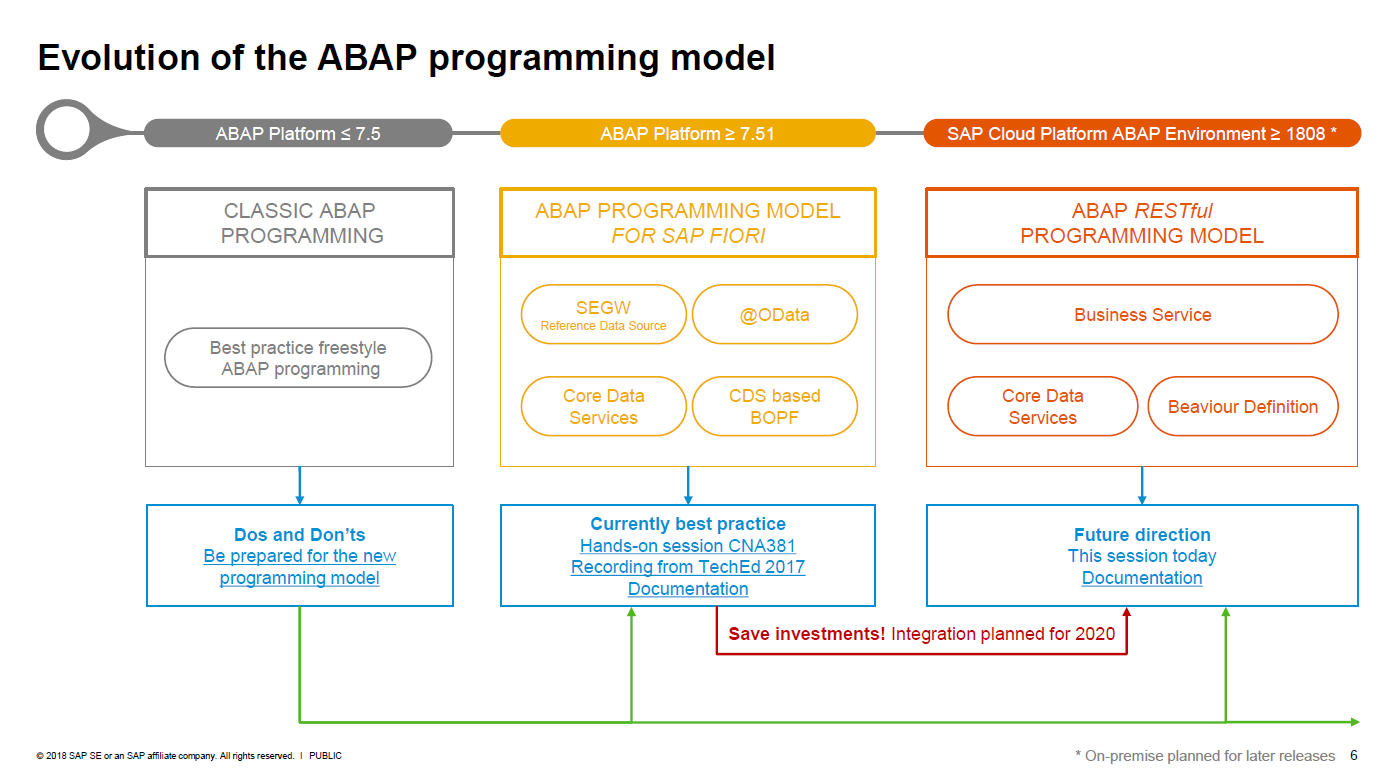 The yellow area is the so called ABAP Programming Model for SAP FIORI and this is the way, how we are currently developing our applications in S/4HANA. As we are convinced about this model in my company, we even take this approach productively in several customer projects  even though the technology stack is “only” NW 7.50 (meaning Business Suite on HANA) there. The model is based on BOPF (generation by CDS), SAP Gateway and CDS in the Back-End. In the front-end we are focusing on FIORI Elements, but of course not exclusively as there is often the need of freestyle FIORI UIs based on SAPUI5. In case you start a new project in ABAP today (and your NetWeaver release allows it) this is the way, how you should implement the project from my point of view.

This model was announced at TechEd 2017 and is now rolled out by SAP… that is what the slides, and announcements of SAP tell you. It is generally available, that is correct – but only in a very limited scope right now. ABAP in the cloud (= ABAP PaaS – which is available for a few weeks now) is based on this model, so it is generally available there – but only there, not in the current On-Premise release. The (SAP) plan is to roll it out in the cloud now, continuously improve and stabilize it over the next releases and bring it (hopefully) to On-Premise with the next release September 2019. However, the current state of the implementation right now is <50% of the model. So even if it will be released in September 2019, it will probably take some time to get yout development team in touch with it and use it productively. Nevertheless, that is the model, which will be the state-of-the-art when it comes to the end of the Business Suite maintenance in 2025 and from my point of view it looks very good (from what you can already see in ABAP Paas). In addition, as SAP invests significantly high effort in the development of the model right now, it really looks that it will last a lot longer than 2025. You probably ask yourself, why this model exists, when there is already the first model in place and available. The major reason is that the first model lacks a few things, which have been investigated over the last years and SAP wants to improve in those points. Besides some general problems like partly in-efficient interaction between the components of the model or ugly un-typed APIs with the BOPF framework the major problem is the lack of support in cases, where the application coding is already available and you want to integrate it. RAP takes the Business Object concept from the first model one-step further and allows you to integrate your current implementation to RAP in 2020 On-Premise (so don’t be afraid to start a new project today based on the first model). It introduces new development stuff like new ABAP- and CDS-Keywords, Behaviour Definition and Business Services artifacts and supports three identified major use cases (currently only the first one is implemented in the current ABAP Paas release): 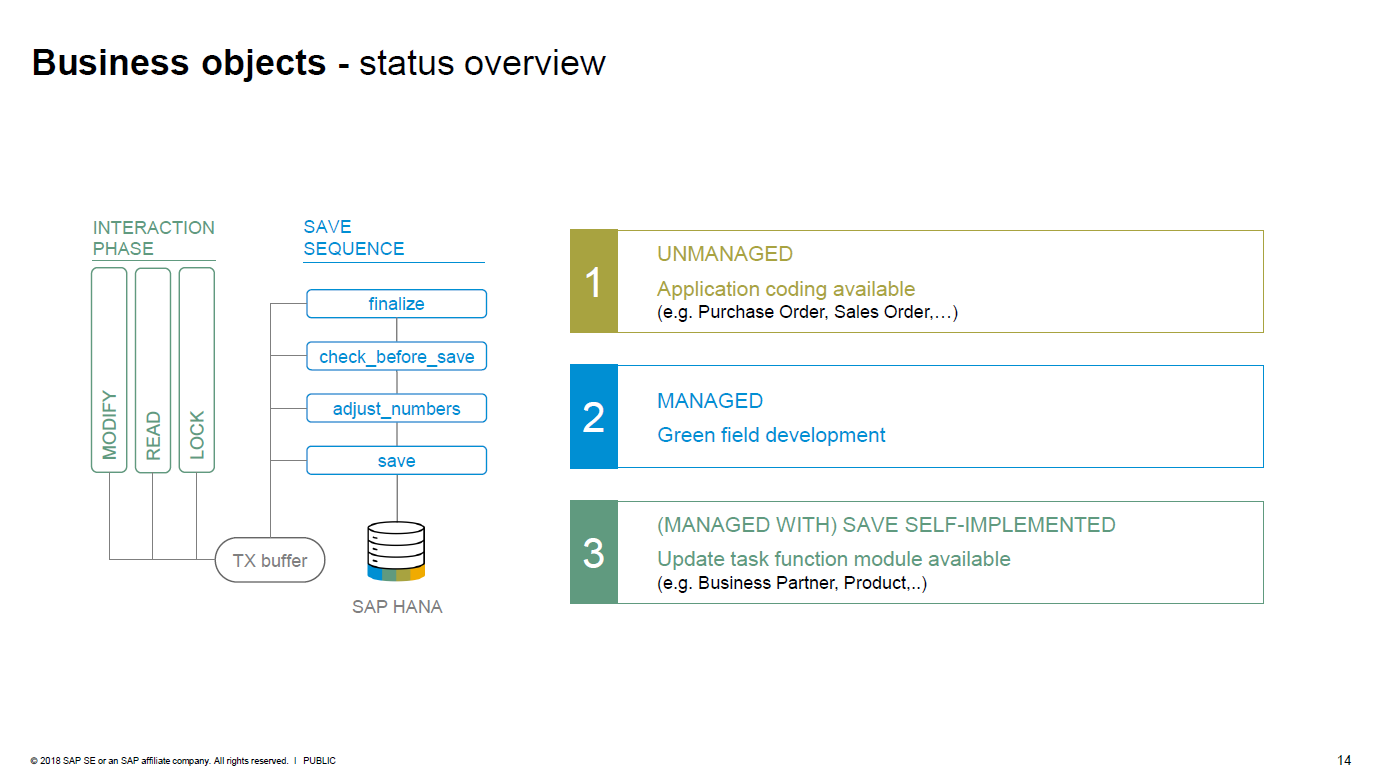 The left side of the picture shows another nice improvement of the model by a clear orchestration of points in time, which can be implemented by the redefinitions of typed(!) ABAP methods with the concrete names of the points in time (like e.g. finalize() or read()). For further information about the RESTful Programming Model there is documentation already available on help.sap.com – for very comprehensive and well-explained information about model, have a look at the TechEd Sessions CNA215 and CNA216 of Marcel Hermanns, if you have access to them.

As some developers in the SAP world think that ABAP is not everything, there is a third non-ABAP programming model as well. This model provides a framework of tools, languages, libraries and best practices to create enterprise services and apps via full-stack development. The following picture (sorry for the quality) compares the model to the RESTful model, which we talked about before:

As you can see there are quite a few concepts, which are applicable in both worlds. Especially also CDS plays a big role in this model – it comes in an even more powerful flavor like ABAP CDS, which also support e.g. the definition of entities along with their relationships and a better-compressed way to implement annotations. Besides different programming languages, of course there are also fundamental differences to RAP, like the service-oriented paradigm instead of Business Objects. If you want to learn more about this model I would suggest to take TechEd session CNA221 as a starting point, where several follow-up sessions are referenced to deep-dive into the topic.

In case you are already familiar with FIORI Elements, chances are good that you already walked through what we internally call annotation hell. Annotations are the way to tell the UI, how the data has to be visualized – they can be implemented in the back-end (directly in the CDS view or metadata extension) or in the front-end via local annotation file. The problem is, that the documentation of these annotations is let’s call it improveable and they are far from self-explanatory, at lesat for my colleagues and myself. Therefore, you unfortunately need a lot of initial work to get familiar with them. SAP is now planning to support the developer with a tool to make this ride more comfortable, a visual editor: According to the preview, a WYSIWYG editor will support you, where you can model the UI. In this way the never-ending loops of Annotate-Activate-Check-Doesn’tWork-Annotate-Activate… should be gone as you can directly tell the system, how the UI should look like. This will be available for all FIORI Elements, so also Overview Page or Analytical List Page – not only the List Report + Object Page. Just as a sidenote, you might already know the UI Adaption Editor in WebIDE – this Visual Editor is the successor tool of it. The label already changed in the WebIDE, the annotation editor is not available so far. Unfortunately, the sources, when it will be available differ – but it will be in the soon future, as it seems at latest first quarter in 2019.

Considering further FIORI Elements innovations, it can be noted here, that “Customer Extensibility” (>= 1.60) plays a big role with high fidelity code extensions for existing applications without the need to do some modifications in the source application. So this is not the FIORI Elements breakouts, like available right now – it is really about extending an existing app.

If you are one of the few readers, who made it until here, I assume that you are interested in the new technologies and innovations provided by SAP in general. But as you might be stuck in your concrete project, which might be based on WebDynpro, ABAP Reports or PBO/PAI programming you might ask yourself “Where and how should I start to prepare myself for the future in order to somehow leave this maintenance hell?”. As there is a lot to learn, it makes sense to start now to be prepared for the future:

I hope I didn’t bore you too much with this long blog. I am quite thankful for the opportunity to participate for the second time now at SAP TechEd. As I think that the information is quite useful to most technology-interested developers in the ABAP area, I decided to make the blog a little more detailed.