We just opened up a new round: Experience the first SAP S/4HANA 1809 solution in SAP CAL

We want to make you aware about our latest newcomer in SAP Cloud Appliance Library: SAP S/4HANA 1809. Just follow the link and you will be able to experience the most recent SAP S/4HANA release in less than an hour. Here is a short list of highlights

Even better, this is just the first of the SAP S/4HANA 1809 based solutions that we plan to release over the next few months. Expect to see the fully activated version of 1809 in a few weeks from now. The Model Company line solutions are already in the course of being upgraded to the 1809 release.

How to connect to a running instance of the 1809 system.

After you have successfully created your instance, you will see a screen like the following

If you plan to access the system from a local desktop, please note down the external IP address of your SAP backend server on which the S/4HANA system with SID S4H is running on top of the SAP Hana server with SID HDB. In our example, the external IP is 42.23.7.3.

First we describe how to take advantage of the remote desktop that is running besides the S4H system on a separate virtual machine. Here is how to benefit from the full network integration between the desktop and the SAP backend server.

Push the connect button and you will be prompted to connect with either browser or, with RDP protocol, to the remote desktop. Remark: when trying to access from your office, make sure that RDP port 3389 is not blocked by a corporate firewall! 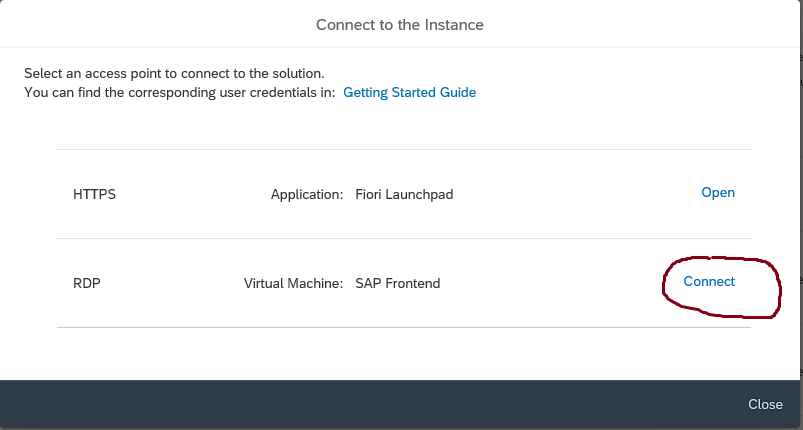 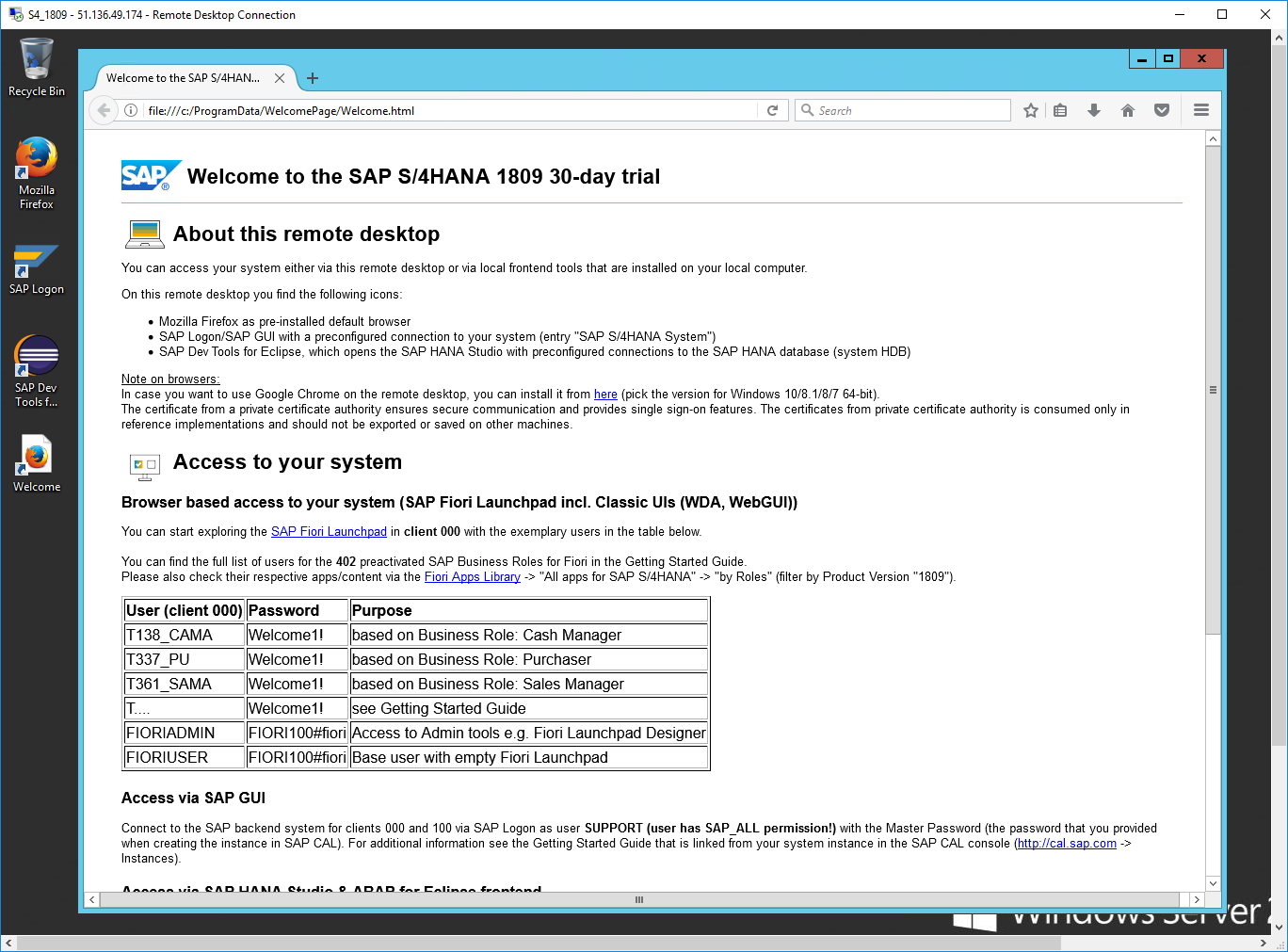 Now you have all relevant information at your fingertips. Just follow the links in the section “Access to your system” and you are able to access the configured Fiori Apps.

Double-click the SAP Logon icon on the desktop in order to open an SAP GUI connection to the system S4H with the preconfigured entry in SAP Logon Pad. 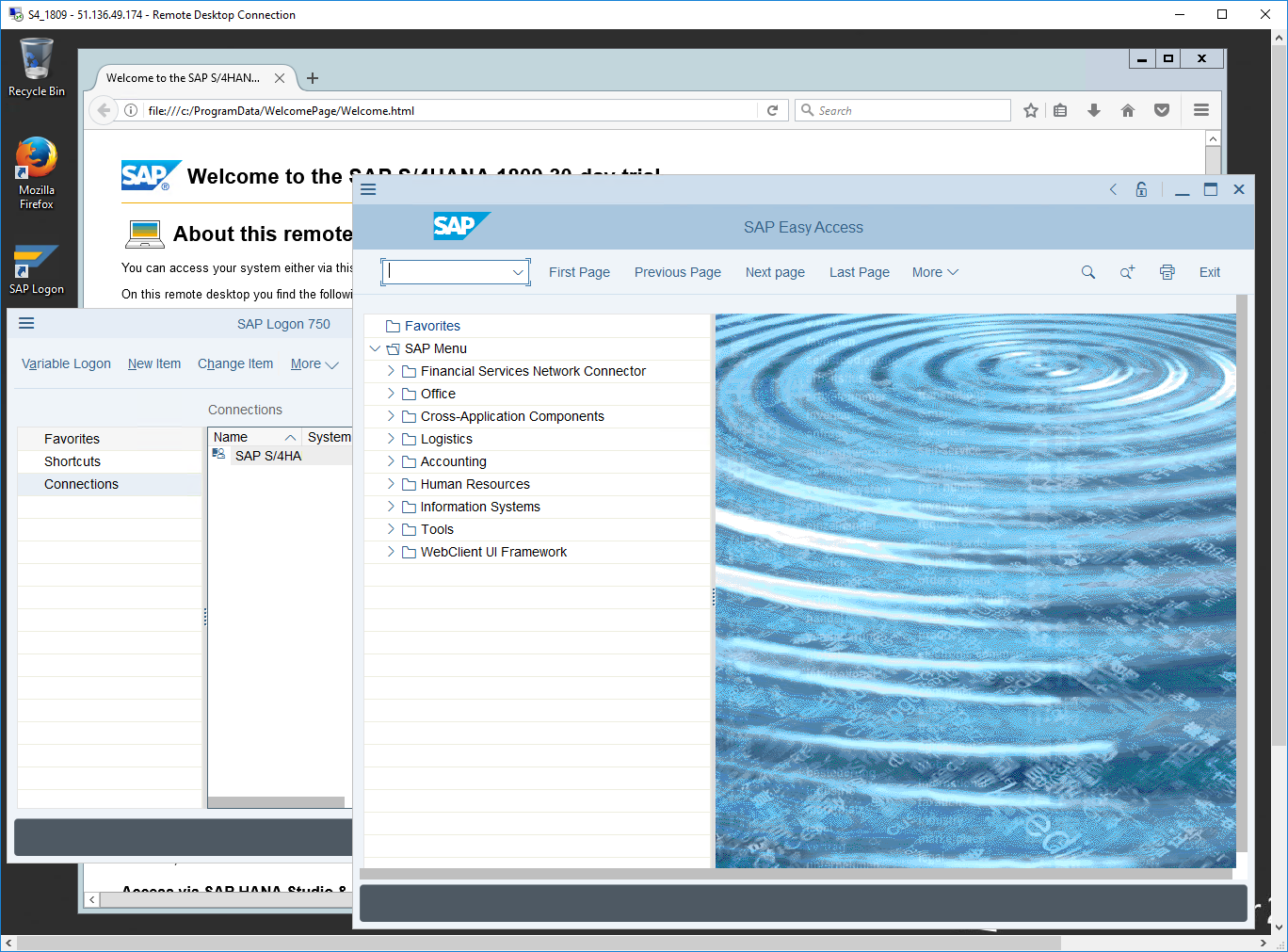 Double-click the SAP Dev Tools for Eclipse desktop icon and you are able to log on to the SAP Hana database HDB with SAP Hana Studio and perform all desired database monitoring and administration tasks. 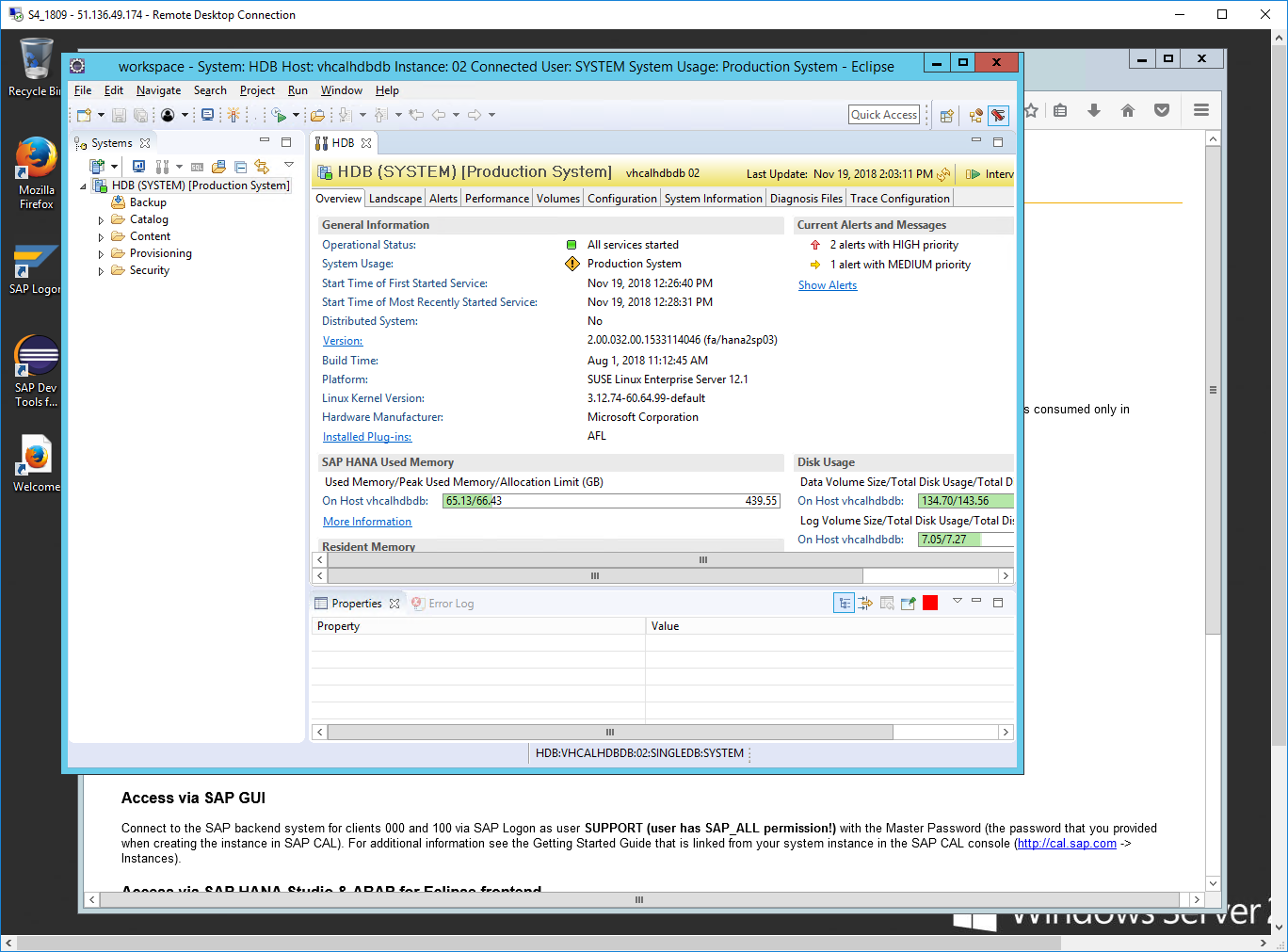 Direct access to the backend system remains possible, of course, but requires some additional steps.The ports on the firewall on the cloud side is opened by default, again take care of your corporate firewall. If you want to give multiple users in your company access, contact your network team and request to open the corporate firewall for the S4H backend. The preferred setup is setting up a VPN tunnel to your cloud account, documenting this is far beyond the scope of this blog.

You first need to prepare your local desktop for browser based access. We describe how to edit the local hosts file on a Windows server on which you have Administrator permissions. Identify the hosts file which resides in directory C:\Windows\System32\drivers\etc and open it with an editor (Notepad) of your choice. Using the external IP of the SAP backend server (see above), add the following line to the end of the file

Access to Fiori apps and other web based functionalities

You can now access the system from your local desktop using https://vhcals4hci.dummy.nodomain:50001/sap/bc/ui5_ui5/ui2/ushell/shells/abap/FioriLaunchpad.html?sap-client=000&sap-language=EN#Shell-home

Open SAPGUI logon pad and create a new custom entry. You can reach the S4H system over the external IP address displayed in the instance view in SAP CAL, instance number is 00 and the S4H SID. If you do not want to edit your local hosts file, you can alternatively enter the external IP address of your S/4 backend instead of the virtual hostname vhcals4hci, to which the central instance of the S4H system is bound.

And now enjoy the new SAP S/4HANA 1809 release running in your own account at the cloud provider of your choice and benefit from our 30 day free trial period.

Just recently I created an instance of SAP CAL 1809 but found that program SAPMV45A is giving an ABAP dump that is stopping me from executing goods movements as a whole. Is there a way to fix that?

The current ABAP program "SAPLV45A" had to be terminated because it found a statement that could not be executed. In include "FOIDINNN ", in line 7 of program "SAPMV45A ", the following syntax errors have occurred: INCLUDE report "ROIDINNN" not found.

did you find any solution for this? We get the same error by starting transaction MIGO

If you have access to SAPNOTES, I can send you a PDF instruction on how to fix the problem. Just send me a PM.

Note 2601603 - INCLUDE report "ROIDINNN" not found fixes this particular issue, but it currently is only accessible on customer request/ticket.

Please open an incident on component "IS-OIL-DS" referring to this issue to get granted access.

Sorry for the inconvenience!