In this post, I revisit some principles that help us “think like the web” and think about them in the context of today’s SAP technology landscape and community.

Last week I watched someone I was with apply for a job on LinkedIn, using the Easy Apply feature, and it left me feeling a little depressed. 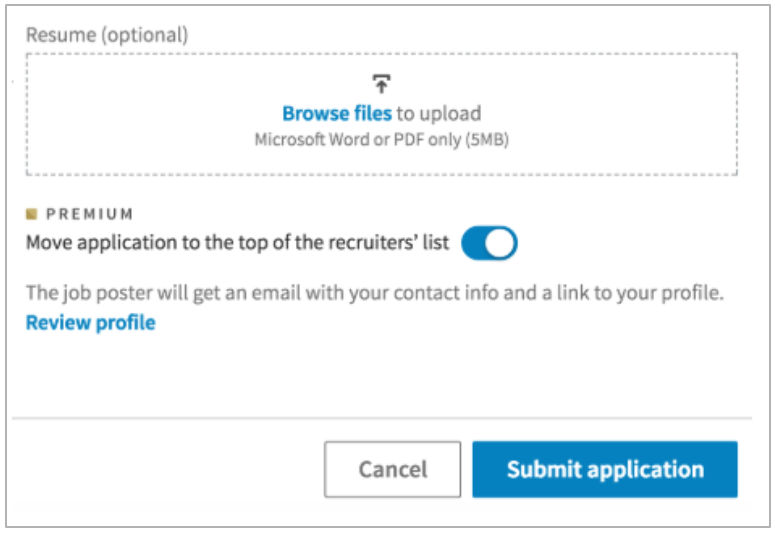 I think the ability to apply to jobs via sites like this is a good feature, it’s just the mechanism we see at the top of this screenshot that’s the problem.

The problem is this part:

Browse files to upload — Microsoft Word or PDF only (5MB)

Don’t worry, this isn’t some point about productivity suite tools. It’s about the process assumed and implied. It’s the assumption that one will *upload* a document to LinkedIn’s servers. The implication is that one is being asked to party like it’s 1999 (with apologies to the artist formerly known as Prince), almost the equivalent of giving someone a floppy disk with some out of date files on it.

In the age of the web, why are we still thinking and acting this way? Uniform Resource Locators (URLs) aren’t just some way of getting to resources on the web, they are a fundamental part of the hypermedia world that we are embracing when we use the web. As soon as we upload a file to a server, as a way of sharing information, we’re taking the bread out of the packet and triggering a countdown to its “use-by” date, asking for it – the data and the bread – to start going stale immediately.

We should be thinking and acting like web citizens, not some sneakernet-like generation. In other words, why isn’t there an option to supply a *link* to the canonical source of one’s CV (résumé)?

(As an aside, I’ve had challenges with some conference organisers in this respect too. Not only do they expect slides to be prepared weeks in advance but some reactions to “here is a *link* to my slides” have been less than encouraging).

Dramatically & metaphorically I rolled my eyes at this anachronistic mechanism, and as they rotated in their sockets they caught sight of a memory of a set of principles enumerated by Jon Udell – principles to help us “think like the web”. Readers of some of my previous Monday morning thoughts posts may remember that I’m a long-time fan of Jon and his thoughts. LinkedIn’s upload-a-copy-of-your-CV-in-the-form-of-a-file process jarred so much in my brain that it caused me to remember the first two principles, which the process broke.

So I thought it worth pointing to these principles, which Jon outlines in his blog post “Seven ways to think like the web“, and consider them in a context that resonates with us – in our community. I also thought it would be an interesting exercise to see how they might also apply as we build solutions on the web with SAP Cloud Platform.

1. Be the authoritative source for your own data

In relation to this principle, Jon writes about the power of public identity and how it is formed and maintained. For us in the SAP Community, this means associating our identity with the content we produce. For some of us, that means maintaining a blog of our own. If you don’t have that, or want the overhead of maintaining your own domain, server, blog system and so on, then the SAP Community blog system is the next best thing – it associates your identity with what you write. What one loses from this principle in this context is offset by the tremendous value we get from sharing ideas on the same conversational platform.

In the context of solutions that we build on SAP Cloud Platform there are multiple aspects to consider. One that immediately comes to mind is the concept of multitenant application provision & subscription (see Hariprasauth R ‘s post “Developing Multitenant Applications on SAP Cloud Platform, Cloud Foundry environment” for an overview of this). When we subscribe to and use such an app on SAP Cloud Platform we’re reminded of the authority and identity of the app’s functionality by the very fact that the URL pattern includes the app name as well as our own (subscriber) identity … I’m thinking in particular of the tenant host pattern.

By the way, this is the first of the two principles broken by the Easy Apply system – as soon as the file containing a copy of the CV content was uploaded, all identity and source connection was lost.

2. Pass by reference not by value

This is strongly connected with the first principle, and is the second of the two principles broken by the Easy Apply system. As soon as you pass by value, you lose control, and the recipient also loses accuracy over time – any copy of data is stale by definition. Moreover, if you need to update the data you’ve shared, it’s a lot harder for you to do so if you’ve made copies and scattered them to the wind.

In the context of SAP Cloud Platform, the concept of an API-first approach to development comes to mind. Rather than base solutions upon the requirement to replicate data between apps or services, think about exposing an API to that data, so it remains the single source of truth in a single place (see the first principle).

3. Know the difference between structured and unstructured data

The example Jon gives again relates to blogging, and is the difference between data for human consumption and data for machine consumption. Remember that Internet citizens are not all human* so different representations are required.

*a fun corollary to that is the cartoon from the New Yorker, with the caption “On the Internet, nobody knows you’re a dog”. 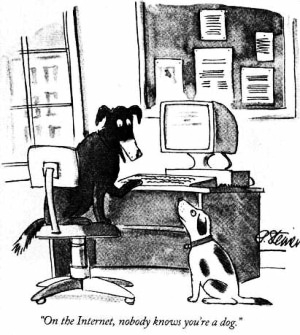 From the New Yorker, a cartoon by Peter Steiner, 1993.

The representation requested and delivered is negotiated in the HTTP request and response via “Accept” and “Content-Type” headers and is called “content negotiation” or “conneg” for short. There are some links in these following two posts that you may find useful for further reading: “Conneg and the duality of weblogs” and “Coffeeshop screencast: HTTP conneg, resource representations and JSON“.

A great example of where this principle is very effective is in the user tag space within the SAP Community. Two examples come immediately to mind – I decided to tag each of the Monday morning thoughts posts with the user tag “mondaymorningthoughts” and immediately I have a quick and efficient way to refer to the entire collection of posts.

Likewise, I took it upon myself to tag my posts about the Application Programming Model with the user tag “applicationprogrammingmodel“, with a similar effect. I managed to encourage other authors to do the same, so we now have a collective and minimum-effort mechanism for organising and sharing information about the topic.

When it comes to SAP Cloud Platform, perhaps the principle is harder to apply. While there are ideas at work in the app URL space that we referred to earlier, I think how we scale apps and services generally means that there’s less relevance. Have a read of “Monday morning thoughts: a cloud native smell” for some thoughts on URLs for the cloud native era to see what I mean.

5. Push your data to the widest appropriate scope

The idea that stands out the most in Jon’s explanation of this principle is the concept of “directed or serendipitous discovery and ad-hoc collaboration”. When you write something and share it on the web, you don’t know how it will be received, much less how it will be used, be recombined with other material to form new ideas or to inspire thoughts in a related direction.

It’s this principle that allows me to be a little more relaxed that I otherwise would be about the first principle and that some folks are blogging on a platform they don’t control. The value of serendipitous discovery of ideas and solutions simply as a side-effect of belonging to and participating in the SAP Community is great.

6. Participate in pub/sub networks as both a publisher and a subscriber.

In a previous post “Monday morning thoughts: the cloud is the computer” I talked a little bit about publish / subscribe (pub/sub or pubsub for short). There’s an obvious connection for us in the SAP Community, where we publish blog posts and Q&A content using tags, and subscribe to those we’re interested in.

But I think there’s a much more interesting connection with solutions that are possible today on SAP Cloud Platform, particularly in the area of decoupled extensions to S/4HANA software. I’ve just started following the new openSAP course “Create and Deliver Cloud-Native SAP S/4HANA Extensions” and there’s this slide in Week 1 Unit 2 (SAP S/4HANA and Extensibility): 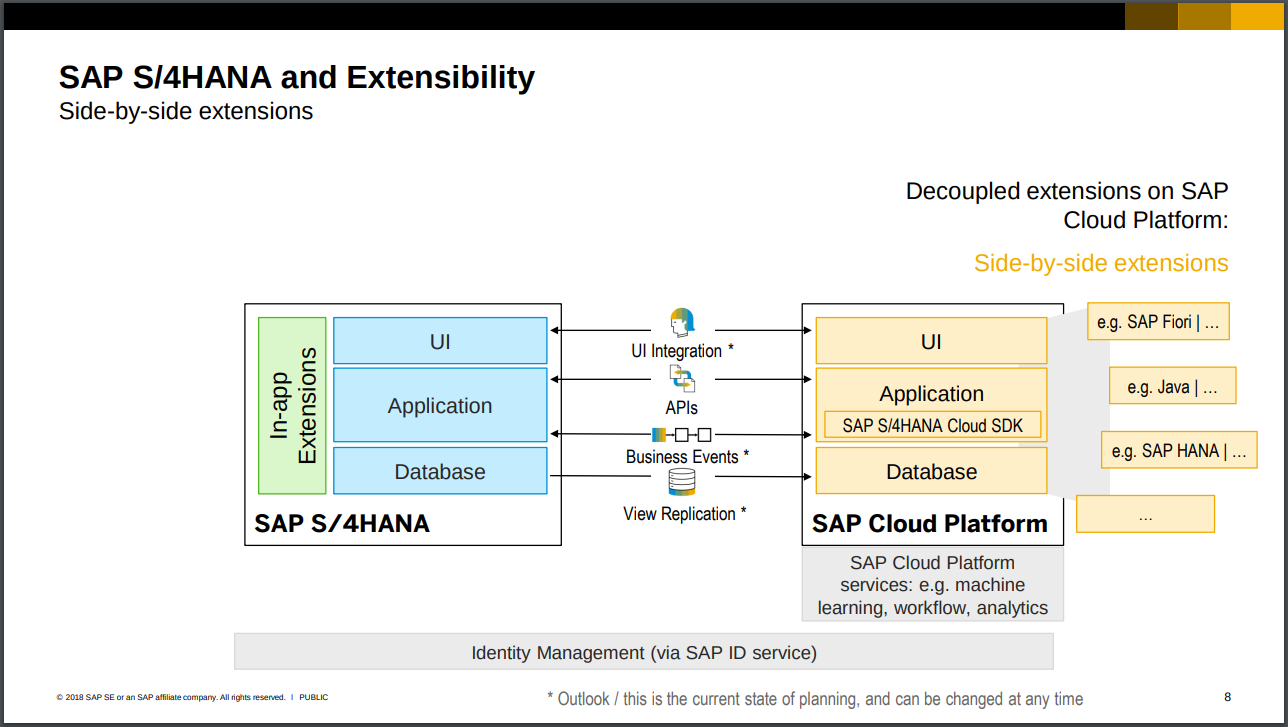 Bjoern Goerke‘s exhortation “keep the core clean” means, amongst other things, extending rather than modifying, and building side-by-side extensions on SAP Cloud Platform allows us to do that.

Interaction with the digital core can be multi-faceted, but the “Business Events” part of the slide reminds me of what we saw at SAP TechEd in Las Vegas and Barcelona – loose coupling in the form of events, which are published and subscribed to by relevant software parties. You can read more about this in last Monday’s post on longevity and loose coupling.

As the first and second principles are strongly linked, I think this principle has a strong connection to the previous one too. In his comments on this principle, Jon reminds us of the “small pieces loosely joined” architecture that in part echoes a major principle of the Unix design and philosophy*.

*As an aside, this reminds me of a wonderful post by Sinclair Target on his Two Bit History blog: “The Source History of Cat“. If you haven’t read his posts, you really have something to look forward to and enjoy.

In another section of the first week’s content on the openSAP course referenced above, the concept of cloud native is described in terms of four key pillars: DevOps, Microservices, Containers and Continous Delivery. I think microservices embodies this principle very well – solutions are broken down into small components, which can be built using different technologies, composed into bigger solutions, be more easily deployed and relatively simply replaced.

When we build solutions on SAP Cloud Platform, following this principle will not only bring benefits from software lifecycle & resilience perspectives, but will also mean that what is built is not orthogonal to the underlying platform upon which everything (well, nearly everything) is built – the web.

Jon’s blog post is relatively old (it’s from January 2011), but I think that the principles he outlines & comments upon are still totally relevant today; moreso, perhaps, as there’s still a lot we are aspiring to, rather than doing. And as we continue to aspire, we can allow those aspirations to flow beyond the original ideas of us humans participating on the web, to how we think about and design solutions in the new cloud native world.

This post was brought to you by a wintry morning back home after a few days in Gran Canaria and by Pact Coffee’s La Concepcion in my SAP Coffee Corner Radio podcast mug.