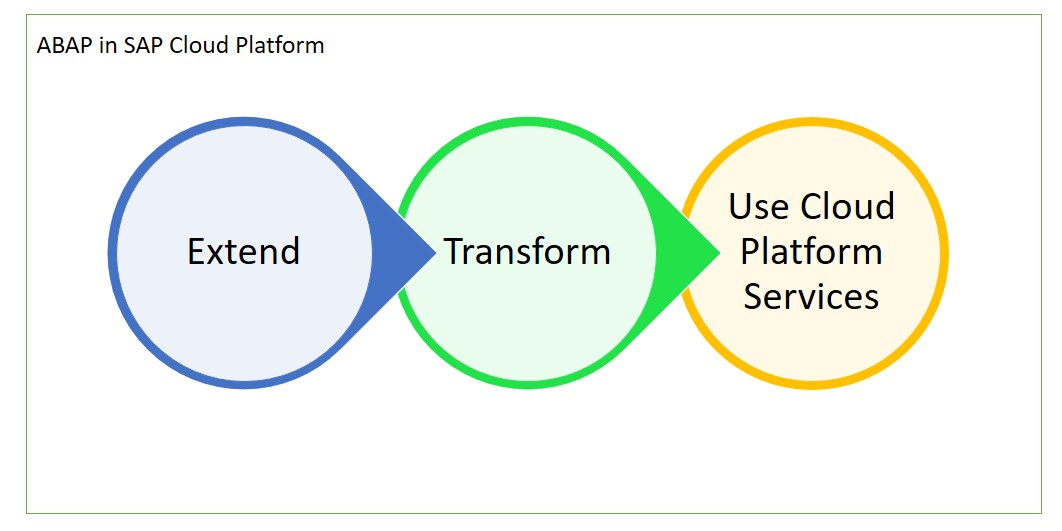 SAP Cloud Platform consists of a lot of components and supported processes. Following features and characteristics are helpful to provide additional value for ABAP in SAP CP:

SAP’s strategic decision to consolidate all PAAS offerings with SAP Cloud Platform offers significant additional value for customers (one cloud platform) and for SAP internally (reduced effort due to reuse of components and standard processes). There are following different options to offer ABAP in SAP Cloud Platform:

High Level Architecture of SAP Cloud Platform Applications
Currently Java or Node.js application on SAP Neo or Cloud Foundry are connected to S/4HANA Cloud or other on-premise systems by either creating Destination or direct HTTP. The same concept will be extended to the ABAP application.

When to use SAP Cloud Platform ABAP Services
With the introduction of ABAP, Developers now has multiple choice to develop the applications. The development language can either be ABAP, Java, Node.Js or anything else. As Cloud ABAP is currently in evolving phase so service will be utilized for below main scenarios

Just as an example, if we have to develop a Chatbot, IOT or Blockchain based application then will use either of the Java, Node.js application instead of ABAP. I will use ABAP when have to integrate the backend system such as S/4HANA or SOH.

Just a suggestion for code migration to SAP Cloud Platform, the amount of code reuse heavily depends on the quality and nature of the custom or partner code. Loosely coupled add-ons with a clear interface to SAP objects will have a significant code reuse. Freestyle custom code interwoven with SAP objects might imply a complete rewrite.

In my next article, I will show how to move our existing code to SAP Cloud Platform.

If you are copy-pasting from other texts then at least consider making adjustments for the year. September 26th was in 2017. It's already 2018.

Jelena Perfiljeva .. I don't make mistakes while copying 🙂 I didn't copied that why you can see a mistake