What are Lifecycle Methods or Lifecycle Hooks in SAPUI5 Controller?

This method is called upon initialization of the View. The controller can perform its internal setup in this hook. It is only called once per View instance, unlike the onBeforeRendering and onAfterRendering hooks.

If you need to modify the view before it is displayed, for example bind data to view, initialize model; it can be done inside onInit() methd.

This method is called every time the View is rendered, before the Renderer is called and the HTML is placed in the DOM-Tree. BOLD_It can be used to perform clean-up-tasks before re-rendering._BOLD

This method is called every time the View is rendered, after the HTML is placed in the DOM-Tree. It can be used to apply additional changes to the DOM after the Renderer has finished.

It can be used to do post-rendering manipulations of the HTML.

This method is called upon destruction of the View. The controller should perform its internal destruction in this hook. It is only called once per View instance, unlike the onBeforeRendering and onAfterRendering hooks.

It can be used to free resources and finalize activities.

Let’s understand with the help of an example

Note: Click here http://embed.plnkr.co/VhN8sz to see the running SAPUI5 lifecycle method example. This link may not work in IE browser.

Save and Run the project. You will get 3 alerts one by one for onInit(), onBeforeRendering() and onAfterRendering().

Click on the button “Destroy View and Controller”, this will destroy the view and controller. Hence the onExit() method will be called and you will see an alert like below. 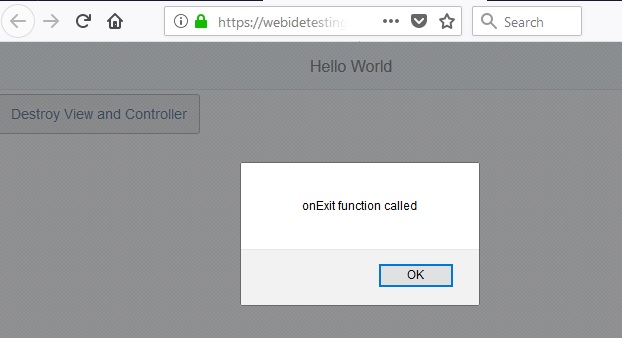 Difference between onInit() and onBeforeRendering()

One of the main doubt that people have is the difference between onInit() and onBeforeRendering().

Let’s say you want to get data from OData model every time you load your view so that you can show user with the real-time data. But if you did this in onIint() then user will not be able to see the changes that are made after the first call of the service(When the view is first time rendered) doesn’t matter how many time view is re-rendered as onInit() will not be called again. That’s why you should load the data in onBeforeRendering().