In this post, I think about a particular function definition in JavaScript, and how it represents beauty and practicality in equal measure.

On Friday evening, I tweeted:

Heading to the woodstore with a beer and cigar. I was reminded of this little gem just now. Lovely.

It was something I’d come across while idly perusing some source code, and I thought it was quite beautiful. I had a few responses to the tweet. In one of them, Srikanth Peri asked for an explanation, and then Julie Plummer suggested I do it in the form of a post in this Monday morning thoughts series. This was a great idea, as I was already on my way to the woodstore. 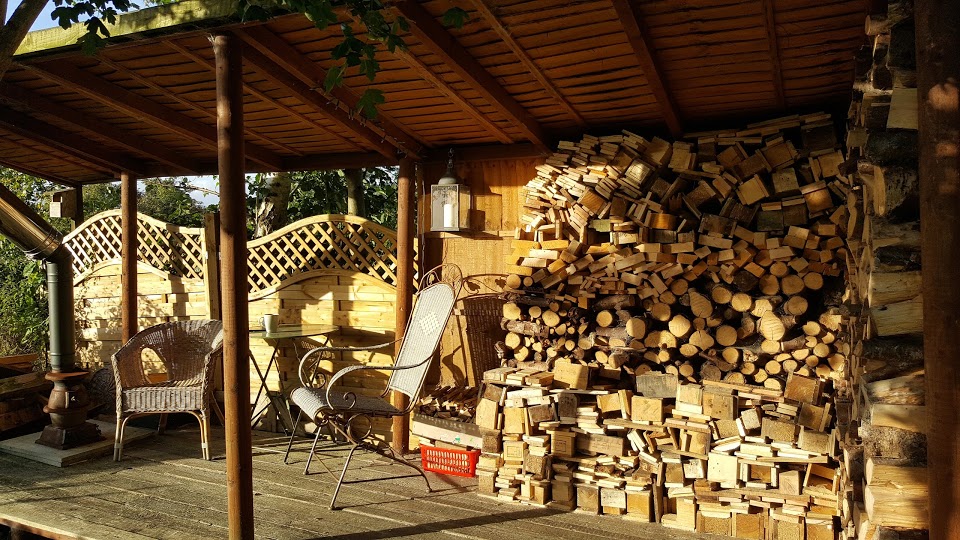 The woodstore, where I read and think about things (and enjoy a beer or two).

The source code in question is a utility program, reuseTableData.js, part of the base repository SAP/cloud-sample-spaceflight which contains the base Core Data & Services data model for the Application Programming Model sessions at SAP TechEd this year (see “Application Programming Model for SAP Cloud Platform – start here“) and written by Christian Georgi & my Language Ramblings partner in crime Chris Whealy.

Why was I reading this? Well, out of curiosity, and a desire to learn more, of course. I have heard that programmers spend only around 10% of their time writing code, and 90% reading it. That sounds extreme, but I can imagine it being true in some circumstances. I’m guessing this covers not only reading code to work out what it does before extending or modifying it, but also reading code for pleasure, to learn how other people write.

I remember researching for my first book “Programming Jabber” in the early 2000’s. I spent many hours in the local coffee shop reading through the source code of the reference implementation of the Jabber (now XMPP) protocol – the jabberd source code, written in C by Jeremie Miller and others. I learned a lot from it, and I enjoy reading other people’s code now and then – not least to see how each author’s character gently but inevitably leaks through into the code.

So back to the program in question. To add a little context, here’s the line of code again, with the comment that accompanies it:

In JavaScript, Array is a global object used to represent lists, and has a number of built-in functions, or methods, that operate on Array object instances.

For example, you can create an array and then use the Array object’s join() function like this:

Another built-in function for the Array object is push(), one of a group of four functions I mentally think about together as a family, as they do very similar things:

There are also other functions for manipulating elements in other places in an array, functions such as splice() and slice(), but what we want to concentrate on right now is push() and its sibling unshift(). Both add one or more elements to the array. And in both cases, what’s returned is the length of the new array. For example:

This is not unreasonable, but it’s also less useful than you might think.

In many situations, you’ll want to create something – an array, a map, another higher level object, and manipulate it. One approach to this which feels to many quite natural is to use method chaining, which is effectively like saying: “do this, then that, then the other”.

This is common in UI5, where for example standard controls, such as the Button control in the sap.m library has methods, many of which return the Button instance upon which they’re operating, explicitly to allow method chaining (see for example attachPress). So we can end up with something like this, where four methods are “chained” together:

In a similar way, you might want to create a list of elements, rearrange it by some means, add something to the end of it, and then map over each of the final collection of elements to end up with what you really need. Like this, for example:

You’d hope to get this:

However, you’d end up with this:

This is because the push() function returns the new length of the array (4) rather than the array itself. Not ideal.

If you’re not familiar with using reduce() and taking advantage of the new ES6 arrow function style, here’s a contrived example:

Here, we multiply a list of numbers, and take advantage of the fact that the function definition being passed to reduce:

implicitly returns the result of the expression a * x, to be fed into the next element iteration until the list of elements is exhausted.

In other words, if you want to use Array’s push() function as the function definition passed in a reduce() scenario, you can’t, or at least, what it evaluates to (the new length of the array) is almost certainly not what you want fed into the next iteration – you want the new (modified) array*.

*the keen readers amongst you will guess that I’m currently slightly uncomfortable at completely ignoring the fact that push() is mutating the array, which is generally a Bad Thing(tm) – but I’m ignoring it deliberately, as that’s a whole other subject for another time.

If you read further on in the reuseTableData.js program, you’ll see that there’s a reduce() in line 73 function being employed to gather table names together:

Now we understand the context of where it’s used, and why the standard push() function is no good, let’s dig in to this definition to see how it works, and why it can be used.

So first off, we can see it’s a function definition using the fat arrow (=>) syntax from ES6. We’re now already somewhat familiar with that, but it still looks a little odd, with that strange looking underscore, and what initially looks like a slightly uncomfortable number of brackets.

Remember that contrived example using a reduce() function above? You can see that the function passed to reduce() is one with two parameters – the accumulator ‘a’, and ‘x’ to represent the elements that are passed in, one iteration at a time. So also here we have a function definition with two parameters, again, an accumulator ‘arr’ (array) and ‘newEl’ representing the elements passed to the function as reduce’s list mechanics iterate over the array, one element at a time.

The first part, (_ => arr) is yet another function definition. What the heck does it do?

Well, it takes one parameter, and promptly ignores it, simply returning the value of ‘arr’. The use of the underscore for this ignored parameter is convention – it tells the reader “we’re expecting a parameter to be passed to this function, but we’re not actually interested in it”. (It’s often used where there’s more than one parameter in a function definition signature, and the intention is to ignore one or more of them.)

The body of this function is simply ‘arr’ which returns whatever value ‘arr’ has. Which is what?

We can be happy enough with this last pair, it’s just a standard invocation of the push() function, where the value of ‘newEl’ is the new element being pushed onto the end of ‘arr’.

and then call it, passing any arguments in brackets, as normal. In this case, there’s one argument to pass (to match up with the single ‘_’ parameter the function is expecting). This argument is the result of the evaluation of this:

which, as we know, will be the new length of the ‘arr’ array. But by the time this is evaluated, the ‘arr’ array will already have had ‘newEl’ added as a new last element, and so we don’t have to worry about the value returned from this (the new length), as we’re going to capture it in the ‘_’ parameter of ‘(_ => arr)’ and ignore it anyway. The sole purpose of the ‘(_ => arr)’ function is to return the value of ‘arr’ — which now has the value of ‘newEl’ on the end.

The upshot of this definition of a custom push function is that we can use it to push an element onto the end of an array, and have it return the infinitely more useful modified array, rather than the almost useless new length of the array. We can then employ it in higher order function invocations such as those with reduce().

Beyond the ability to define anonymous functions (to use in higher order functions) and generally program in this dynamic way, the mechanic that allows this whole idea to work is called a closure.

Dynamic programming in general, and this style of extension in particular, is a wonderful thing, and I consider this particular definition of push to be quite beautiful.

There are alternatives, of course – my friend Martin Rue suggested this:

which achieves the same effect by relying on the fact that the last value evaluated in the execution of a function (again, without curly braces) is the value that is returned. In this case, that is simply ‘xs’*. Also very elegant.

*I note that Martin used ‘xs’ to represent a list of ‘x’ elements, which is a rather nice meme, or at least an idea, that I picked up from various functional programming treatises and used, for example, by Erik Meijer in his wonderful series on Haskell and F#. Perhaps more on that another time.

So, here’s a hat tip to Chris Whealy who I’m guessing had some influence on the distinctive style of this reuseTableData.js code. I know Chris and have started to recognise his ‘signature’ in code. And I’ll leave you with a recommendation to study other people’s code every now and then. It can be a lot of fun, and educational to boot. Happy reading!

This post was brought to you by a cold Monday morning, before setting off to the airport for Barcelona and the European instance of SAP TechEd. If you’re there, stop by the Developer Garage for a chat about this or anything else!