My first SAP TechEd 2018…and so many first times!

“Max’s Adventure in SAP Cloud Platform” is now known as “Maxis adventure to SAP TechEd” 😉 I guess I promised too much when it came to my journey in the SAP Cloud Platform in a series of blog posts. A lot has happened lately..unfortunately, the blogging suffered from that. But a small follow-up report from SAP TechEd Las Vegas. I try to keep myself short and not to exaggerate too much – but maybe one or the other has not yet heard of SAP TechEd and thus discovers something new 🙂

So many first times!

My first time in the United States, my first time at SAP TechEd, my first time as a speaker, the first time meeting most of my teammates personally. So many first times that I was of course excited, curious or even nervous – hard to describe. But before I could start the actual trip to the US (including some other stops in Palo Alto, Yosemite, Death Valley, Grand Canyon), I first had to prepare a lot for SAP TechEd in Las Vegas. 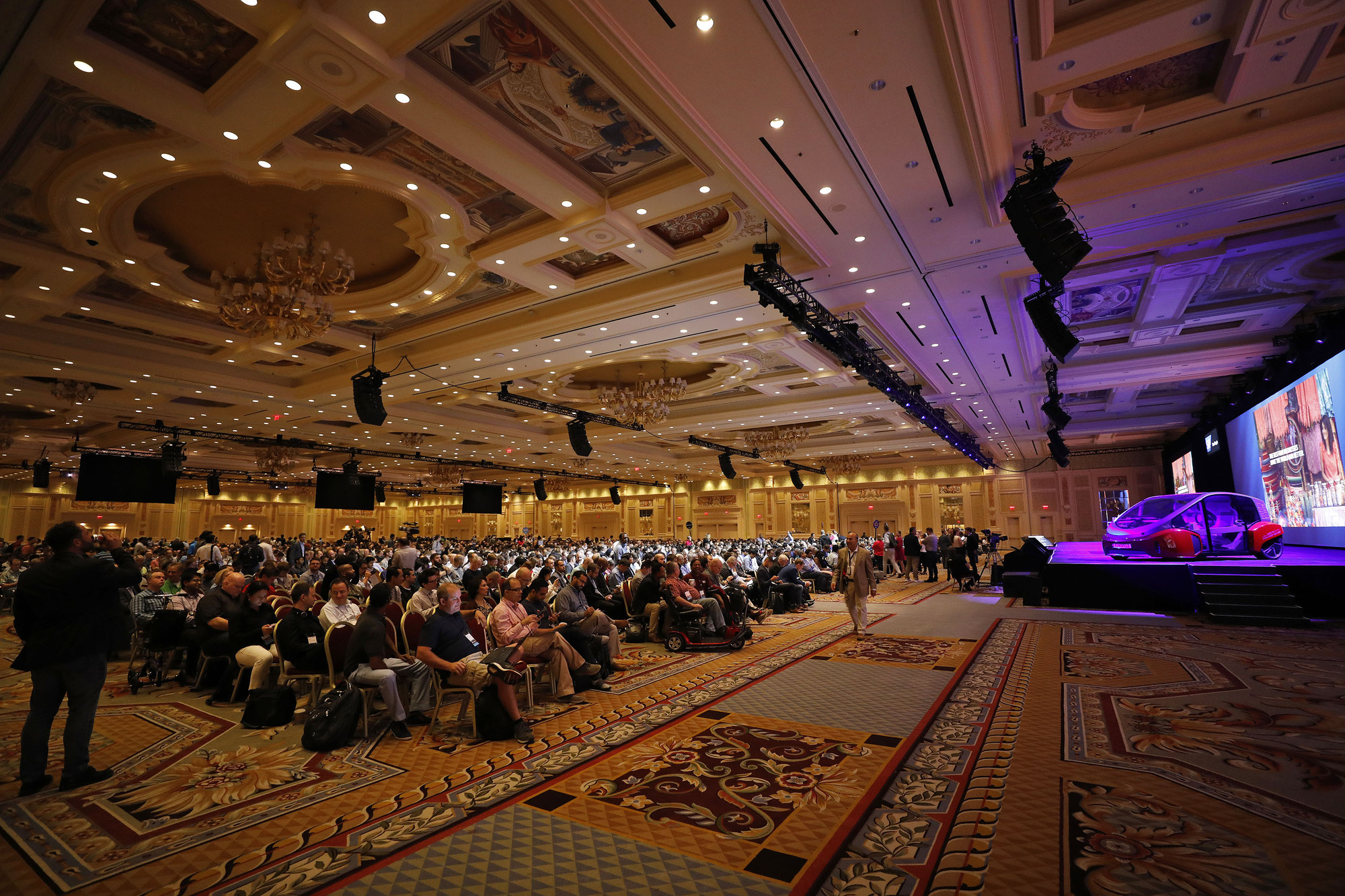 Admittedly, I had never been involved with SAP TechEd in general when I was a consultant. I knew roughly what it was all about. But to take the time to rummage through the documents in the aftermath or even to be on site was simply almost unimaginable.

And now I’m able to be onsite in Las Vegas and Barcelona, supporting in the developer garage on the show floor and as a speaker in one of the many learning journeys at TechEd. That meant not only the honor of being allowed to take part in all this but also a lot of preparation.

First of all for some of you who don’t know the rough “structure” of SAP TechEd – and that’s probably just a few. Just like me so far. The TechEd is basically divided into several tracks. Lectures, hands-on sessions, etc in classical lecture rooms – lecterns, large screens and everything that belongs to a classical presentation. Product managers, developers, evangelists and many more try to give you a helping hand in countless sessions. (Session Catalog Barcelona: Link).

And the show floor. On the show floor, you can find lots of booths of SAP and their partners, which demonstrate countless showcases, possibilities of cooperation and much more – so much, that you could spend three days on the show floor easily without actually having seen everything.

And right in the middle of it: The Developer Garage. The “hands-dirty” garage. Lots of computers, lots of experts and evangelists and all with one goal: to teach you new things or to improve existing skills. And how? With tutorials. About the SAP Cloud Platform in general, about SAP ABAP in the Cloud, about S4/HANA, native Android and iOS Apps with SAPs dedicated SDKs … and the same about the possibilities that open up with our partners like Google, AWS or Microsoft. 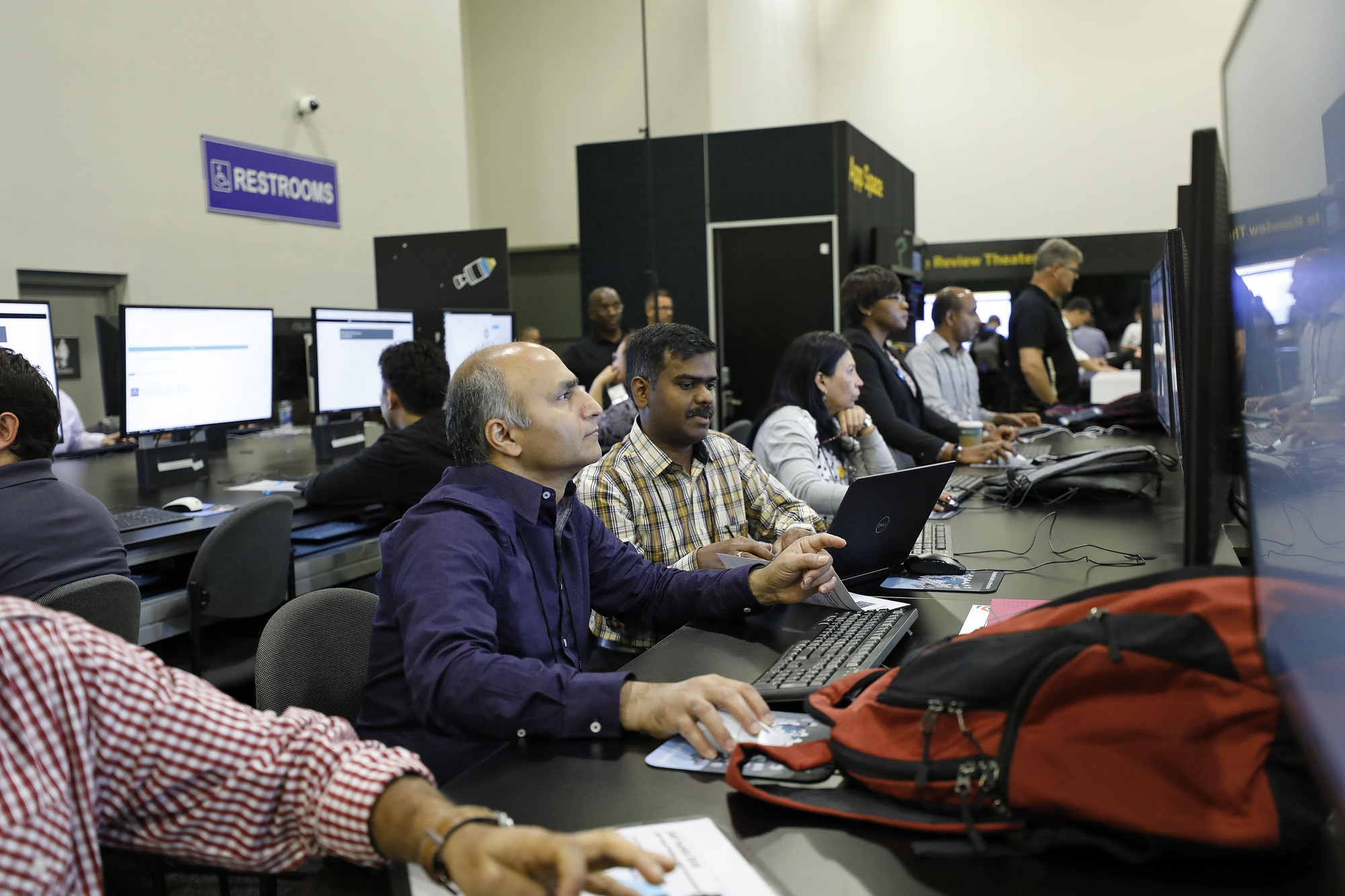 My team colleagues and I have also created a series of tutorials (bundled in so-called missions) to introduce you to the technology. My colleague Marius Obert from Munich and I jointly built the mission How to integrate Microsoft Office 365 into SAPUI5. Integrate Outlook into an SAP UI5 application? Super easy, have a look! There’s a completely new Tutorial Navigator you should explore anyway.

Participants are coming, asking questions, sitting at the computers and starting. The experts on the respective topics are always in the surrounding area and are available with advice and action. That generates a lot of interest – it’s not common to have an expert for yourself every day. To be able to pose questions of any kind. And as a bonus on top, there are also prizes for completed tutorials – starting with socks, Bluetooth speakers, power banks or even drones, for the very industrious.

Over 2000 tutorials have been completed at SAP TechEd Las Vegas 2018!

Speaker in a Learning Journey?

Speaker in one of the several learning journeys – to be exact Explore SAP:

“Being a developer in the SAP ecosphere has never been more exciting. Find out what opportunities there are, and make informed decisions on what you should master next.”

Too abstract? Let’s dig a little deeper. My exact session title is “How to become an extension and integration expert in a cloud first-approach”. As generic as the session title is, as comprehensive are the possibilities to fill an hour that is given to me. Where do I start, where do I stop? Where do I have the knowledge, where I don’t have knowledge? Where do I lose my listeners in detail, where do I bore them with already known things? Who is my audience anyway? All in all, a task that was not quite easy for me. 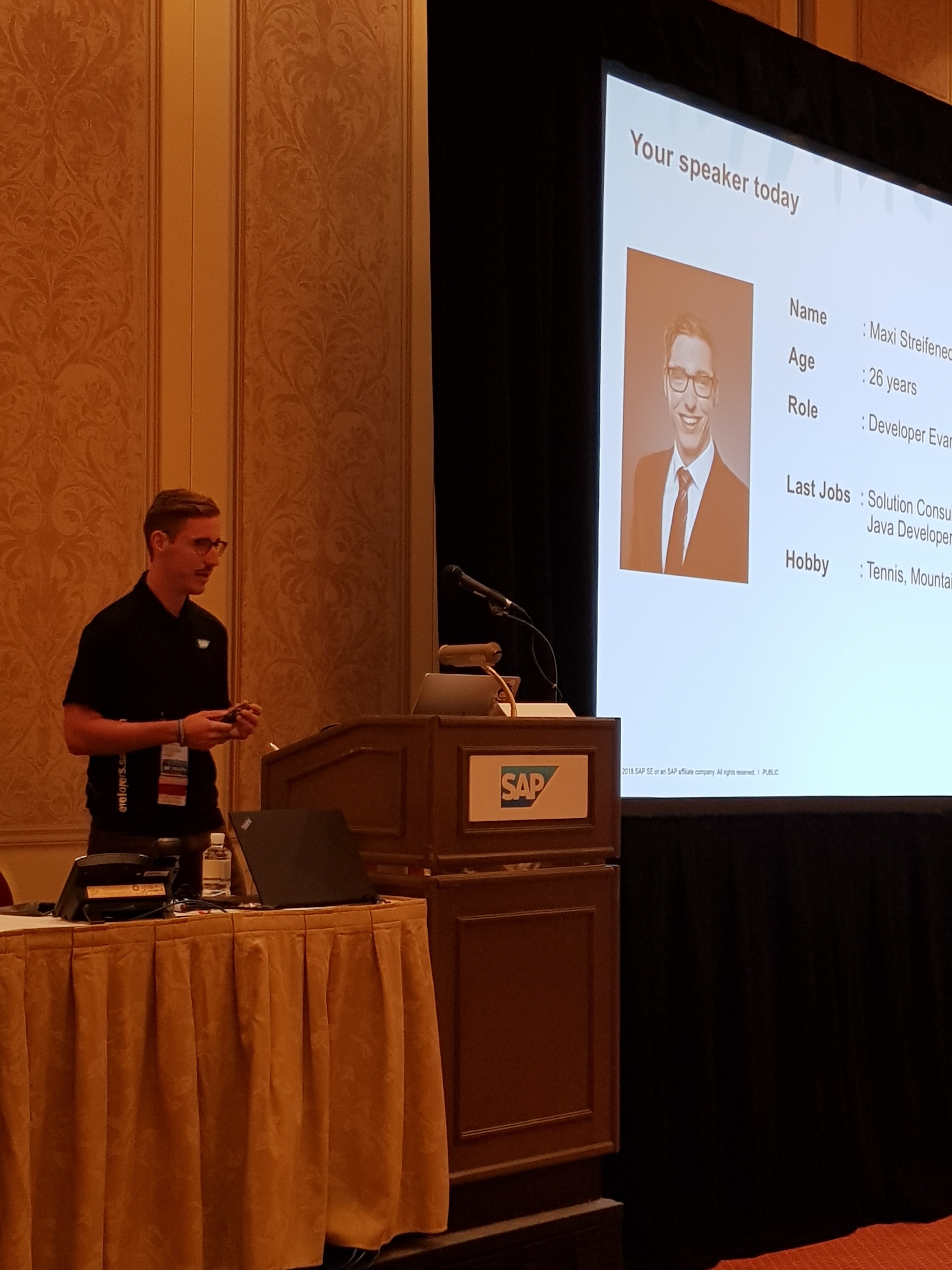 On all accounts, I am satisfied. Rarely that something like that happens. One of the central points, why I probably didn’t disappoint the audience: Honesty. (Thanks again to DJ Adams  and his internal sessions for presenters) The audience will notice anyway if you have no clue. I can’t and won’t know everything and don’t have to beat about the bush if I can’t answer a question. Of course, I try to figure out the answer later on or point to other sessions that can provide a more thorough answer. What probably helped me the most was to tell the audience: “Yes, I am nervous”.
And let’s be honest, the old phrase “you can’t please everyone” unfortunately also applies to such events 🙂 Nevertheless, I have tried to please as many people as possible.

How to become an extension and integration expert in a cloud first approach?

Hell, what a title. The title, I think we agree on that, promises quite a lot. (Which, by the way, doesn’t make it any easier for my first speaking session…) And I have to admit, hardly anyone will leave the room and turn into an expert after an hour of a maxi lecture. IT and SAP, in particular, are too extensive for that. As you know, all beginnings are really difficult.  It is well known that all beginnings are difficult. But I can point out a way where you can start and how.And for all further steps, I am sure, everybody is good enough to make himself an expert. In general, I would describe the path to become an expert which presumably also looks like for many other topics:

Or just come to one of my sessions, if at the TechEd or one of the other events. 😉 There you’ll find everything in more detailed.

Nothing to add. I didn’t expect that my first TechEd will get that inspiring! No matter whether in discussions during my lecture, then anywhere at SAP TechEd, in the Developer Garage or at one of the various evening events – the participants are so inquisitive and grateful for any input at the same time. This is also a new experience when you were a consultant for many years.

And on the other hand: The SAP Developer & Community Relations Team. People from all over the world. So many different cultures, so many different thoughts. It was a blast! See you in Barcelona! 🙂

thanks for sharing Maximilian Streifeneder & great to meet you in the turorials area. It is definitely an experience coming to SAP Tech ed. I really enjoy learning, visiting and meeting new people from all over the world.. all gather there for the same purpose.

Sergio, was fun meeting you! Keep your spirits up!

Nice blog!  I hope there will be a second, third, fourth... time for you!  I didn't get to go this year.  So it's great to read these blogs.

It does sound like a lot of work went into the preparation.  I know more people appreciated it than you know.

Hey Michelle, thanks for your words. Hope folks out there could benefit from my work 😉

See you at TechEd next year!