Purpose of this blog

The first purpose of the blog is to provide an overview of CDS View and explain the differences between the CDS View types. There are many types of CDS Views, and characteristics and the definition are quite different. Some are positioned as data layer (transaction/master) and others are positioned as application objects and consumed by applications. I personally think Consumption View (CDS View used by application) cannot be called “View” (combination of tables/views) but should be rather “Query”.

The second purpose of this blog is to provide example source code  for each of the CDS View types from the Predefined Virtual Data Model (VDM).

To understand the source code, I think the best way is to refer to the example source code, and it is also the case for ABAP CDS View. Other than Standard DEMO Examples of ABAP CDS views, you can see Predefined VDMs as examples to understand CDS Views. Unlike examples from DEMO CDS Views, you  see CDS Views based on the real business entities from Predefined VDMs. Simple examples for study may help, but sometimes the requirement in real world is more complex, so the samples  from a real case would be more helpful.

Please see the blog if you want to know the VDM used in a Fiori app.

My motivation to write this blog

CDS View is one of the key of S/4HANA architecture principles. Pushdown (execute within the HANA DB Engine) is included automatically when CDS Views  are used, and CDS Views are the foundation of Fiori applications. However, CDS Views may not be so easy to understand. One reason is many of the published  documents focus only on particular types of CDS View, e.g. Many  documents about Fiori Development, focus only on CDS View with UI annotation, and  Analytic Query, details about Interface Views are not included. I feel a holistic view of CDS View is what is expected.  I also belive general SQL knowledge is not enough,   where knowledge applying to application specific settings are  also required,  including  SAP specific characteristics, e.g. association.

I’m writing  this blog to help  address the current situation, of missing a holistic view of CDS View, with all required insights available in one place.

CDS View types and examples in this blog

From the term “View”, you would imagine it is the combination of tables/views. However, in reality a Consumption View is rather a query or frontend object.

For those who may have some BW skills, we can compare some CDS Views to BW objects as follows:

Transaction Composite View is like a Multiprovider or Composite Provider)

How to open CDS View in ADT

You can open the definition of the Predefined VDMs used in this blog with ADT as follows:

Search with the DDL Source name (“I_PROFITCENTER” in the following case) and select the listed CDS View. 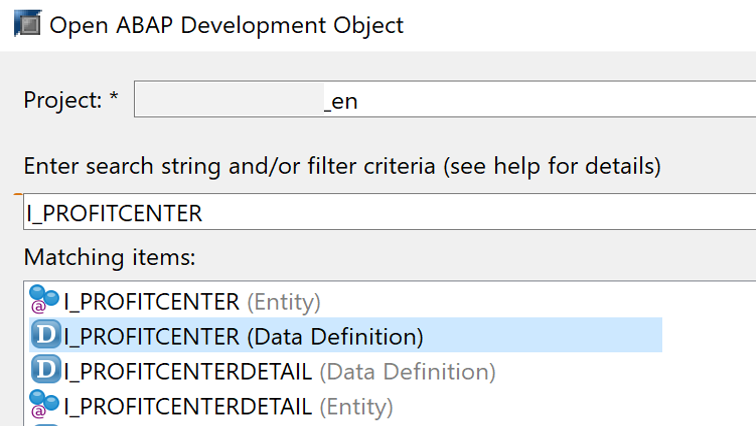 The definition of the CDS View is displayed. 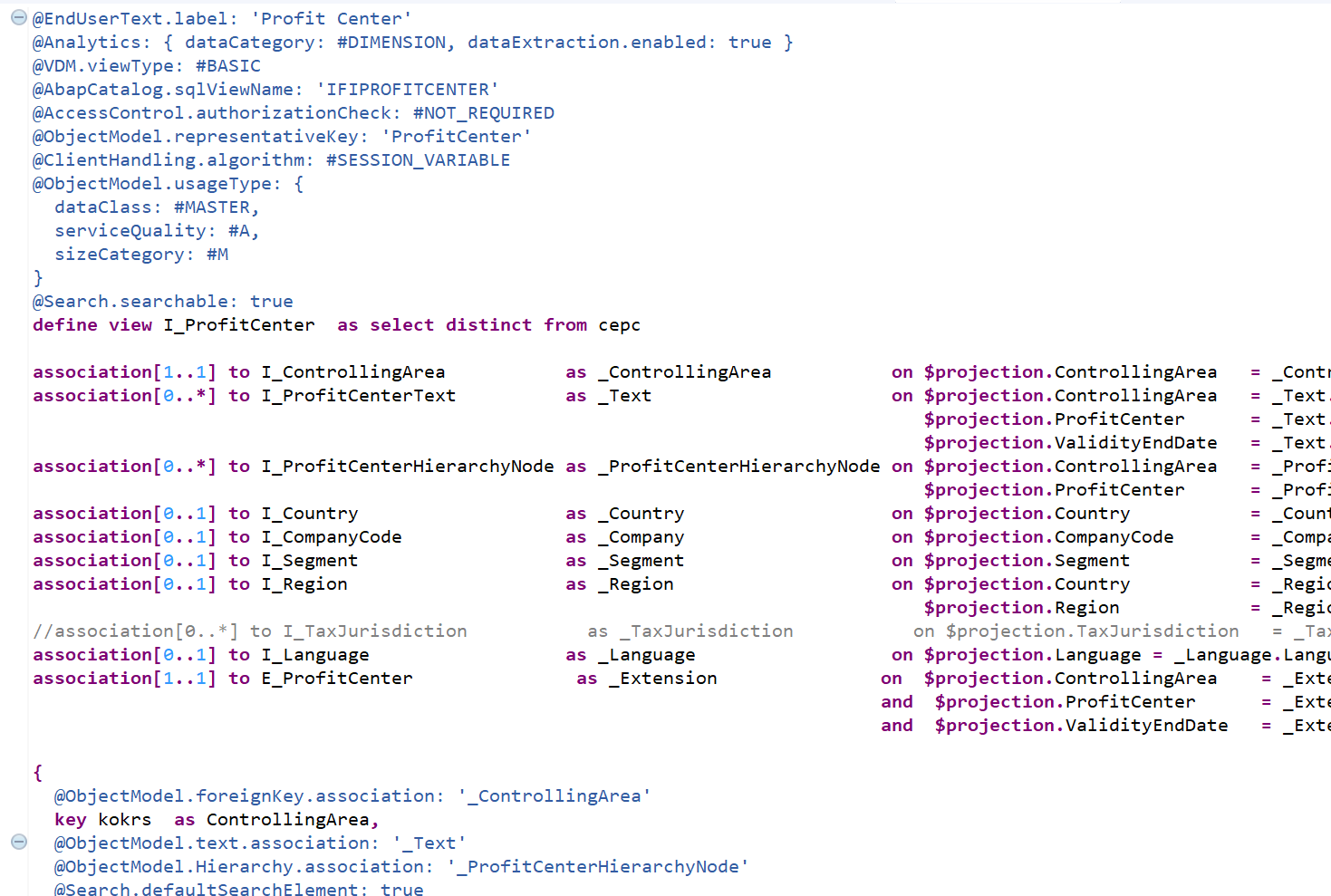 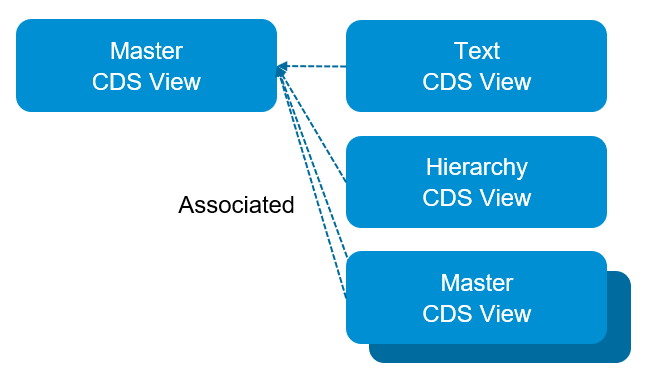 Other than the Master View in which analytical category is set to DIMENSION, there is Master View for Value help used in CDS View with UI annotation. As is used in the Value help for the transaction CDS View C_SUPLREVALRSPEVALUATEST, which is the source of Fiori app “Evaluate Suppliers “F1650”, Searchc annotation is used to activate fuzzy search in the value help of the selection field in the List Report.

In the transaction view used as the source of OData based Consumption views, keys have to be set.

(This example is to explain the technical characteristics, which is slightly different from the main topic of this blog. But  as it is so interesting and think it will help provide further context the Predefined VDM).

In the Native SQL of the AMDP, “string_agg” is used, which is not available in normal ABAP CDS Views.

Table function can be used in other CDS View.

CDS View including BOPF Business Object works as the source of the apps to insert/update/delete data as well as to read.

There are many sources about BOPF like the blog.

On the other hand, BOPF is not a part of new framework called ABAP RESTful Programming Model (RAP).

(It is the source of C_SalesPlanTP used in OData SD_SALESPLAN, the OData of Fiori app “Manage Sales Plans”)

Object Model annotation is used for the detail setting for the CDS View with BOPF Business Object.

BOPF Business Object can be opend with ADT.

It can be checked with the Transaction BOB in SAPGUI. 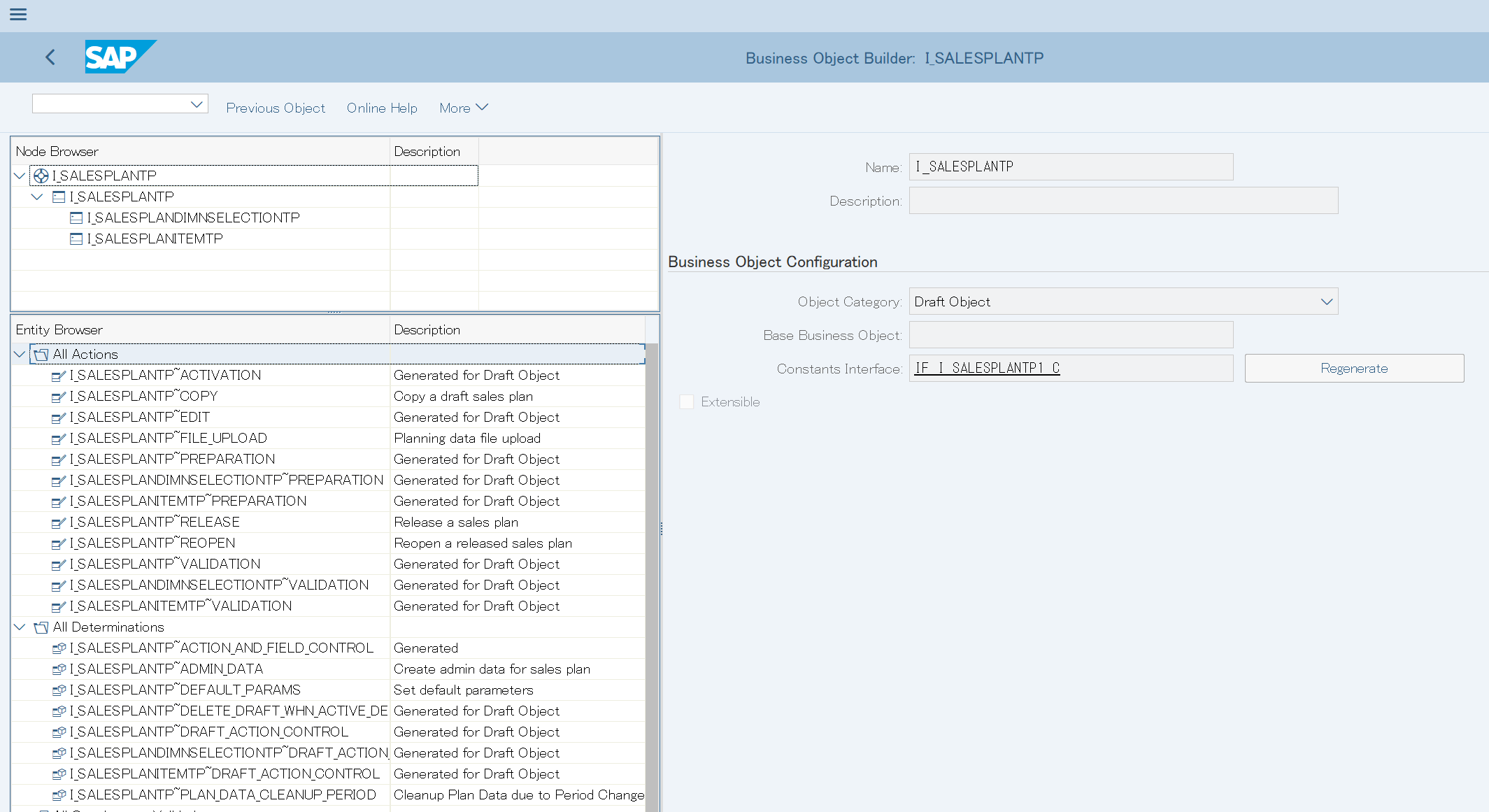 ABAP Logic can be included in CDS View using Virtual Element. It is defined at the level of CDS consumption views as additional elements within the SELECT list using specific @DataModel annotations. However, the calculation or further processing of their values is carried out by means of ABAP classes that implement the specific code exit interfaces provided for this purpose. This function is available as of NW 7.52.

It works only in the generated OData service, not in, e.g. Analytic Query.

(it is used in the OData MD_C_PRODUCT_MAINTAIN_SRV, the source of Fiori app “Manage Product Master”)

But they are only my current personal opinions, and I think there are some other ones who have different opinions but are also good. I would like you to share your opinions.

It is recommended to participate in the following training courses.

Hope it help understanding overall of the CDS View!

I'm glad this is long as the examples help.  I'm using CDS views.  However, I believe there are times to use them and a time to just code for your tables.  What are your suggestions?   When would you create a CDS view?  Assuming one can't be found that will work for you.  (or extended)

Sorry, what is your point?

I'm wondering when would you create a CDS view instead of just doing it in ABAP?  Sometimes, it is an easy choice if the CDS view is already available.

If Predefined VDM meets your customer’s requirement go with them. it it could meet by adding some fields, they can do that.

For creating them, Key User Tools could be used, but the functionality is limited. Then the remaining way is to use ADT.

In addition, even if standard Fiori app is used, IT team want to know the technologies used in the app. Then it is essential to understand the difference of the CDS View type.

Thanks for the Blog on Types CDS views with lot of information.

where we can use the CDS API View,Can you give example?

Below is the answer from DEV team.

They are solely used to define OData services for external (cross system) consumption on them, and are kept stable across releases.

They must not be used otherwise.

This is glad information, wanna to know the query part in RSRT. How to we create the selection parameter prompt like Variable? with default select last 3 month data? Still need to using CMOD coding?

Regarding the filtering time attributte, I would be happy if my blog could help.

Nice Blog!! Thanks for sharing the information.

I would like to know where can I get information about CDS annotations apart from its documentation. I always get confused when to use which annotation and why. I have gone through all the SAP Help Documentation but that is not enough. Is there any source where I can get examples of the annotations?

I think SAP help is the best to know detail of each annotation.

Hi Masa, I got the couple of questions in this blog.

Very nice and helpful bolg.
Thank you so much for sharing.
Helps me a lot as I am coming from BW.

Thanks for sharing wonderful blog.

Can you please check below mention blog and share your suggestions.

But i have not tested, so, sorry if it would not work.

Thanks Masa for sharing your view.