You can use ABAP Daemons, to implement event handling in a reliable way.  ABAP Daemons are long-living ABAP sessions, which are similar in their capabilities to Linux daemons or Windows services. The application server takes care that once an ABAP Daemon was started, there is no limit for the lifetime of such ABAP session. Even if there is an ABAP runtime error, or a work process in the application server crashes, the ABAP Daemon session gets restarted immediately.

ABAP Daemons have event-driven programming model (similar to ABAP Channels) which contains the typical event handler API for your implementation needs with such methods like on_start, on_message, on_error etc. ABAP Daemons are available with SAP NetWeaver AS ABAP 7.52. The startup configuration was added to ABAP Daemons in ABAP platform 1809. 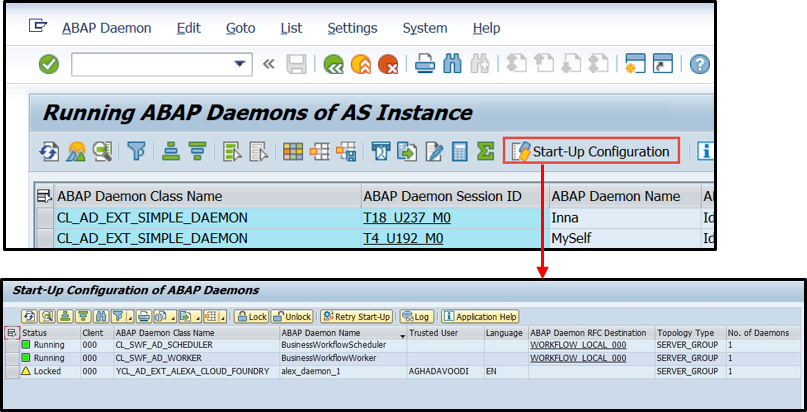 Each start-up configuration entry specifies for a daemon application how many ABAP Daemons instances should be started in the ABAP system and on which application servers and under which user.

The main use case is handling events. For example, you can use ABAP Daemon as an event scheduler in Industrial IoT (Internet of Things) scenarios. Just imagine if multiple sensors are connected to the ABAP system, the ABAP server receives too many incoming messages. These messages cannot be processed concurrently, but it is possible to queue them by starting an ABAP Daemon session and sending messages to it. This central scheduling ABAP Daemon session will be always available for event processing.

You can also use ABAP Daemons for very frequent periodic tasks e.g. like health checks. The advantage is that you do not need to create a new ABAP session for each task execution and no background work process is needed. For heavyweight periodic tasks, that run at most once a day, we recommend using batch jobs.

You can use ABAP Daemon also as a proxy session for external communication like e.g. messaging proxy in MQTT scenarios (see also MQTT client in ABAP Platform 1809 blog). For example, you can connect an ABAP Daemon session to the UI via ABAP Push Channel (WebSocket), and to the MQTT broker via the MQTT connection and exchange messages between UI and MQTT broker.

Get your hands on ABAP Daemons

This online developer tutorial on www.sap.com teaches you how to Create a simple ABAP Daemon.

Learn in the other online tutorial how to Forward MQTT and AMC Messages Using an ABAP Daemon.

I guess if you have a multiple application servers, you'll have to start the daemon on each one.

the number of active daemons and the involved servers can be maintained at the start (configuration) time of the daemons. If you are using the start up configuration of daemons the active number if daemons in system is controlled by the ABAP system (kernel). This is, when an application server state is changed to inactive or stopped gracefully, the ABAP system checks the daemon configuration table for the adjustment of active daemons in the system, i.e. stopping the daemons on the server in shutdown/inactive mode and starting new (replacement) daemons on the remaining/configured servers, if it is required.

You mentioned that ABAP daemons are similar to Linux cron jobs. That is not right: in Linux the equivalent are system daemons. Cron jobs ar the same as Netweaver Batch Jobs.

the ABAP Daemons reflect actually both Linux concepts, i.e. act as a Unix daemon and also as a “lightweight” cron job (time-based scheduler). With the ABAP daemon specific  ABAP Timer can a scheduler with a precision of seconds be realized as well.

thank you! I updated the blog to emphasize the Linux daemons concept.