A Curious Case of Juggling – SPDD/SPAU in SAINT

After successful upgrade of ERP 6.0 System to EHP08, we started patching a third party add-on. We had our checklist ready which highlighted steps that needs to be followed while patching.

As we were patching in development system, we have performed modification adjustment (SPAU/SPDD) properly and captured in transport request.

We also made sure that in order to automatically transfer the transport request to the subsequent systems for an automatic modification adjustment, we flagged transport by calling transaction SPDD/SPAU. From menu Utilities -> “Select for Transport” or “Assign Transport” (for higher release). This will add the CTS project SAP_ADJUST to the mentioned transport request (a prerequisite to later determine the request as adjustment request).

As final step, when add-on upgrade got finished and we had to release transport request, that’s where all the juggling happened – “We had released SPAU transport first and then SPDD transport“.

NOTE: In SUM, release of SPAU/SPDD transport request is taken care by the procedure itself whereas in SAINT, you have to do it manually after procedure is completed.

We were unaware of it and we have upgraded our Test System to EHP8. Now while applying third party add-on after the upgrade, we found something unusual. When SAINT asked “Add Adjustment Transports to Queue””, we clicked Yes and provided adjustment transport.

IMPORTANT NOTE: SAP System does not have the logic to check which transport request is of SPDD and which one is of SPAU. Instead it import SPDD/SPAU transport in the system based on the transport sequence you can see in below screen.

Here SPAU Tranport request is coming before SPDD so during SPDD phase it will imort SPAU transport as it is coming first in the list.

We could not find any solution to this and we didn’t wanted to use Test System to capture modification adjustment again. We started analyzing and we were very much interested to find out the table from which it reads and display in above screen.

Here we have found that the delivery time of SPAU is ahead of SPDD transport due to which you find SPAU transport first in the queue of modification adjustment screen.

We went to debugging mode and changed the DELIV_TIME of SPDD transport and made it’s timestamp before of SPAU DELIV_TIME.

Once you made above changes, go back to your SAINT screen and click “Back” and then click on “Continue”. So that it can read it again from PAT03. 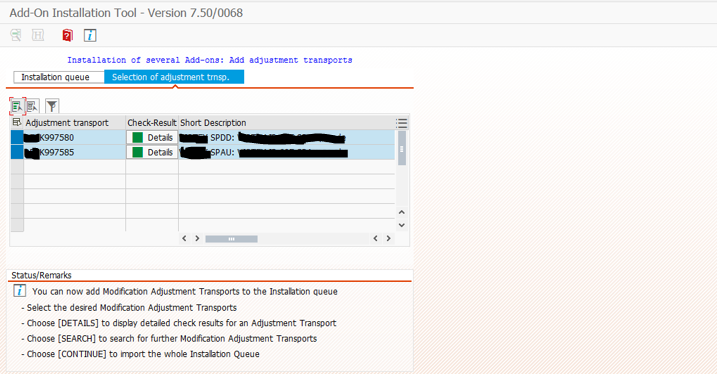 And our add-on upgrade went smoothly. But this additional steps we had to perform on each system.

I thought of sharing this workaround as I haven’t found any solution with regards to this kind of issue.