In this post I walk through the process I used to set up a development environment for CAP on my Chromebook.

(See the Updates section end of this post for a couple of notes on things that have changed since this content was published.)

I’m a big fan of Chrome OS, it’s my primary choice for computing for many reasons including high security, consistency, efficiency and practicality. I have a lot of devices running it – a Google Pixelbook as well as an older Samsung Chromebook, an ASUS Chromebit and a shiny new ASUS Chromebox – the N005U. I even have a version of Chrome OS running on my old iMac 24″, via Neverware’s CloudReady system.

The advent of beta support for Linux on Chrome OS is very interesting and an opportunity for me to try out running Visual Studio Code (VSCode) locally. I wasn’t disappointed.

I’m also very interested in the Application Programming Model for SAP Cloud Platform, and its agnostic approach to development environments and deployment targets & runtimes. I installed the cds tool and the extension for VSCode to get a feel for local development with the model on Chrome OS. This post is a brief account of the steps I took, in case you want to do that also.

Initially only in the Chrome OS beta channel, the support for Linux, at least on my Pixelbook and Chromebox is now also available on the stable channel. That said, I use the beta channel on both of these devices, in case you’re wondering.

Turning it on is simply a matter of a single click in the settings, whereupon a Linux container will be downloaded and started up:

A short while later, a lovely calming terminal appears, the sign for me of a real operating system. This signals the successful completion of the process:

(See the end of this post for an update on this.)

While I was in download mode, I went to the SAP Development Tools for Cloud download page and downloaded the official CDS Language Support feature for VS Code:

Note that as the Linux support is via a container, you have to transfer downloaded files to it. The File Manager makes this easy. I just dragged the two downloaded files into the “Linux files” folder that represents the home directory of “qmacro” (my Google ID) in the terminal above: 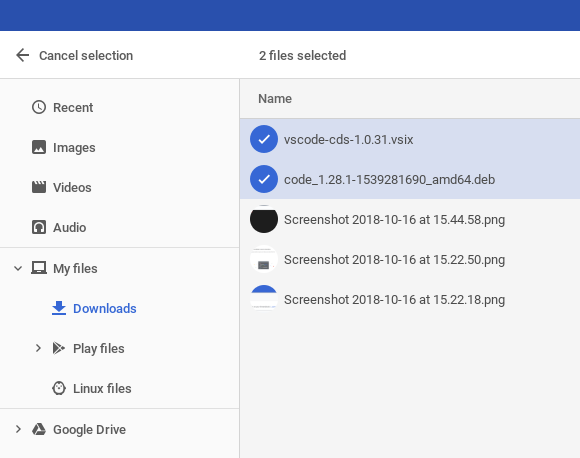 You can install Linux packages like the .deb file very easily, by using the file’s context menu item “Install with Linux (Beta)”. I did this for the VS Code package: 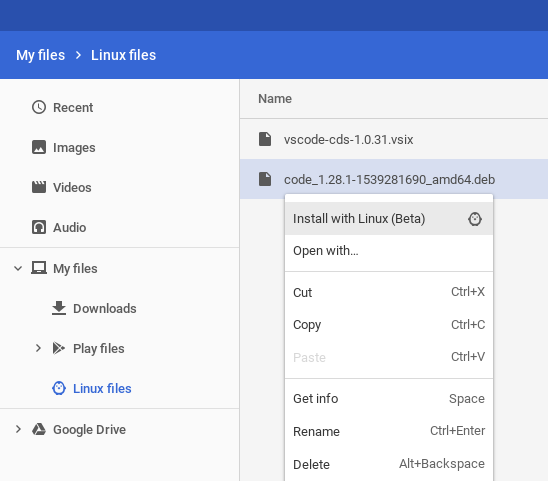 and in a short time received a notification that the install had completed:

I then had a new icon in the tray:

I started VS Code up and used the instructions on the SAP Development Tools for Cloud download page (see above screenshot – basically following “step 3”) to install the CDS Language Support extension directly from the VSIX file.

So far so good!

I installed a couple of other VSCode extensions, but these aren’t essential. I’m a big vim user, so I use the Vim extension for VSCode, and I also installed the SQLite extension for comfortable in-IDE browsing of SQLite databases.

Next I needed to install Node.js. There are many ways to do this, but I find the Node Version Manager (nvm) to be very useful, and it has a nice side effect of preventing you from getting into a tangle with root privilege requirements – everything you do in Node.js installations via nvm should *not* require the use of root (sudo) so you can’t shoot yourself in the foot.

In the Linux terminal, I used the curl-based installation approach described on the nvm GitHub repository homepage:

and after a few seconds I was ready to use nvm to install version 8 of Node.js, which I did like this:

(See the end of this post for an update on this.)

CDS is at the heart of the Application Programming Model and there’s command line support in the form of a tool called ‘cds’ in the ‘@sap’ npm namespace, available from the SAP NPM registry. Read more about this registry in this post by Sven Kohlhaas “SAP NPM Registry launched: Making the lives of Node.js developers easier“.

To make use of the ‘@sap’ namespaced modules, it’s necessary to tell npm about this registry:

Now we can install the cds tool. I did it globally, rather than for a specific Node.js project. Note that because of the nice side effect of nvm mentioned earlier, globally still means within my user space:

If you’re following the SAP TechEd related set of exercises that I mentioned in “Application Programming Model for SAP Cloud Platform – start here“, then you probably also want to explicitly install the cds generator too:

At this point, I’m all set, and if you’ve been following along, you are too!

We’ve got a lovely local development environment for the Application Programming Model, on a proper operating system, with great tools and a competent IDE with rich support for the CDS work we’ll be doing. 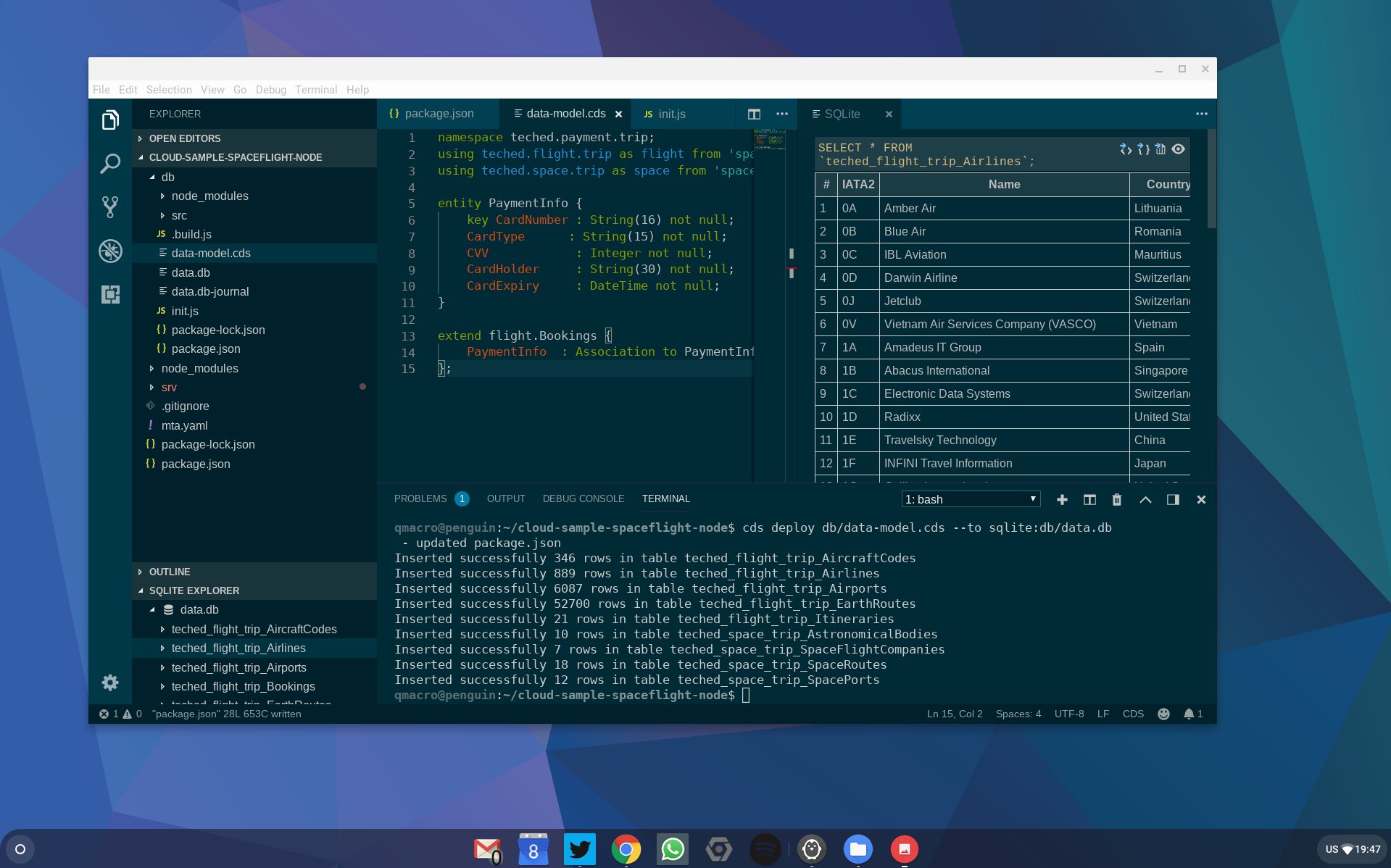 If you’re wondering what to do next, you might want to try the exercises in the GitHub repository “SAP/cloud-sample-spaceflight-node” – happy hacking!

2020-09-28 Since the publication of this post, a couple of things have changed. First, you can get the VS Code Extension for CAP directly from the Visual Studio Marketplace, see the July 2020 CAP Release Notes for details. Also, the Node.js packages for CAP are now in the public NPM registry, and the main wrapper package for development is @sap/cds-dk. This means that to install CAP for Node.js globally, all you need to do is: run npm i -g @sap/cds-dk.

Seems like CDS support for VS is limited, When ever i tried adding cds tool, its throws the same "no matching version found"

I've just tried it on a fresh node/npm install - works OK for me. Worth retrying?

BTW this is the cds tool itself that we're talking about here, rather than any specific support for VS Code.

What about git support on chromebook. How did you done that?