In this post, I think about my experience going from primary school to secondary school – “big school”, how that parallels our collective move from on-prem to the cloud, and how the community is more important than ever in this transition.

My first school, Norman House in New Moston, Manchester, was a small place, for pupils aged 4 to 11. We had fixed desks where we kept all our exercise books and pencils, stayed in the same classroom for each year, played in a small playground with a huge oak tree, and got dropped off and picked up by our parents each morning and afternoon in a regular and fixed routine. We went to the swimming baths once a week, following the same route along the pavement hand-in-hand two by two.

After a short time the school became a very comfortable place, everything was familiar, even down to the daily delivery of small bottles of milk for us to consume. We learned the basics early on — reading, writing, Maths, English — and improved upon them as we progressed through the years.

Moving on from that school to “big school”, William Hulme’s Grammar School, in my case, was a whole new experience. Rather than be shuttled back and forth in the car, I, like many of the other boys, was to use public transport. The school was in Whalley Range, and as we lived at the time in Stalybridge, it was quite a journey.

One weekend just before the start of the first term of the first year, my mum took me on the bus route, so I could learn where I was going. The route consisted of a 10 minute walk from the house, followed by three buses – one into Stalybridge bus station, one from there to the centre of Manchester (Piccadilly bus station), and one from there to the school. The entire journey took between an hour and a half and two hours, each way.

That’s where the excitement and trepidation started. Not because the journey was so long, but because all of a sudden I was in the real world where variations and different options presented themselves. There were different buses that I could take for any given segment of the journey. Some took slightly different routes but got me to the intermediate or end destinations with advantages (less crowded, more frequent) and disadvantages (slightly longer routes). I had choices to make as soon as I closed the front door of the house in the morning.

And the choices and variety exploded at school. No longer did we learn just the basics. As well as Maths and English there was also Geography, History, French, Latin, Physics, Chemistry, Biology and eventually Ancient Greek and Ancient History. Some subjects were mandatory, others optional. The timetable for each class and stream was a huge affair, an A0-sized sheet with hieroglyphic-like legends depicting the schedule of each class’s periods over the day. The school was huge and there were many buildings and areas serving different purposes*. It was easy to get lost, or find yourself in a place where you ought not to be.

*there was even a computer room with terminals available (and this was in the 1970’s) – see this O’Reilly Radar interview: Burn In 7: DJ Adams for more info on that. 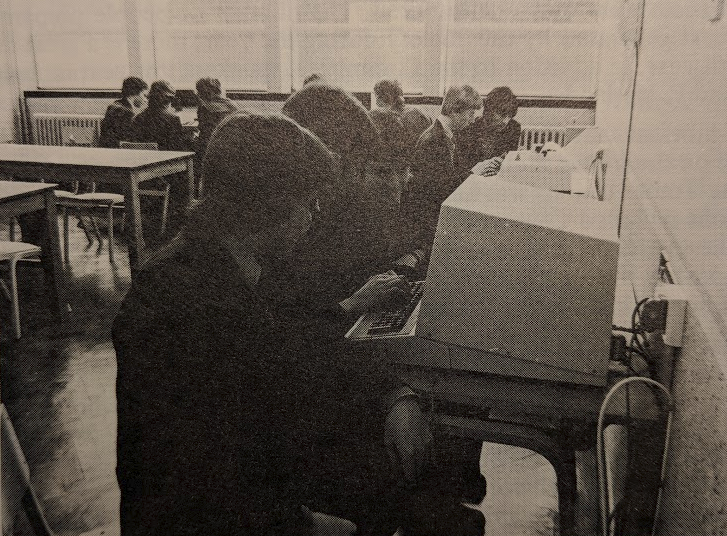 A grainy picture from a “Hulmeian” school magazine I’ve kept from 1979, showing the terminal room with a Systime terminal in the foreground and a paper terminal (yes, a printer head and a sprocket-fed continuous stream of paper instead of a screen) in the background.

William Hulme’s was a wonderfully complex environment, as different and varied as Norman House was fixed and rigid. In this complex environment we could start to forge our own paths. As we progressed through the years, some opted to study modern languages, others science. Each pupil did what he needed or wanted to do according to what he had to learn and in which direction he was going. (I found myself playing a lot of lacrosse and rugby, studying dead languages, and spending all my free time in the terminal room. But that’s a story for another time.) There were more opportunities for failure, but there were also many different paths to success.

Moving to the cloud

The move from Norman House to William Hulme’s reminds me a little of where we are in the SAP ecosphere, with moves from on-prem to the cloud.

Norman House is the regular, rigid, predictable, dare I say “safe” on-prem environment, where we can walk down to the computer facility and see round all sides of the machines that sit there and hum. The systems themselves are complex, yes, but follow a definitely regular and predictable pattern. To a large extent, ABAP is the reading & writing, Maths and English studied in primary school. That’s not to say it’s anything simplistic – far from it. But for many it’s the dominant of two languages (the other being Java), with which solutions are built, using the familar NetWeaver design time and run time architecture. We know where to log on, where to develop, and our tools are fixed. We know how to move our solutions through the landscape tiers, where and how they run, and how they’re monitored. 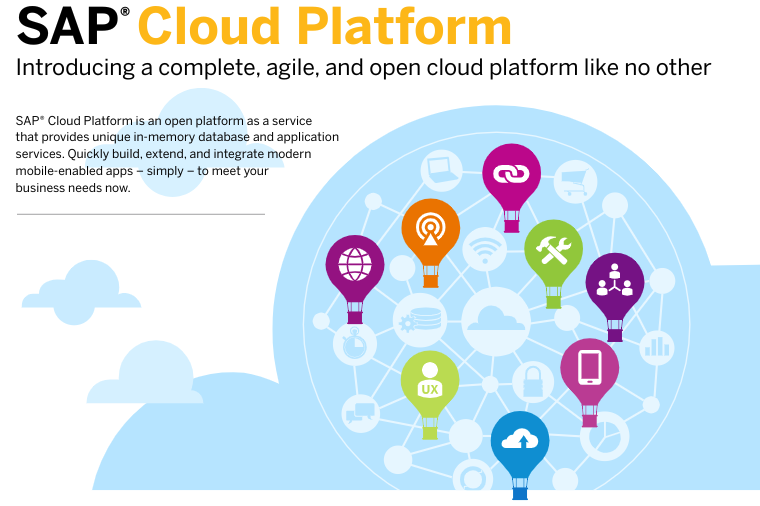 But we also know that there’s a world outside that’s just waiting for us to explore, a world described by older siblings as they recount tales from big school when they come home in the evening, tales that impart a sense of wonder, confusion, and excitement in the young mind that’s only experienced the fixed and regular environment of primary school.

There are many reasons to move to the cloud, to embrace a cloud-first approach to computing in general and to building business solutions in particular, and these reasons have been well documented elsewhere so I won’t go into them here. But moving to the cloud can have that same degree of mystery, of wonder, excitement and also of bewilderment. There are choices. Not only in how to get to the cloud, but also in what to do when you’re there. Languages. Environments. Models. There are choices in what you build, and how you build. Hybrid integration and orchestration, cloud native architecture and development, container-oriented computing, microservices, 12-factor apps, languages galore, and differing (and complementary) approaches to designing and implementing an enterprise wide set of services.

Moreover, there’s the world outside of SAP too. No longer are there fixed borders; rather, the computing worlds run together and overlap like watercolours on a canvas, and influence each other like never before. We’re buying new studs for our rugby boots from a shop in Manchester that’s also selling football kits to other folks who don’t have anything to do with our school. We’re building new SAP solutions in the cloud using development tools that the rest of the world are also using.

The importance of the SAP Community

There’s more to learn, more to share, and more possibilities than ever before. I’m reminded of what Graham Robinson and Jon Reed talked about in the recent SAP and Enterprise Trends podcast episode “SAP TechEd Vegas in Review – ABAP on SCP, serverless ERP, community and more with @grahamrobbo“. Early on in this episode they think about the SAP Community, how it has undergone changes over the years, and how this year in particular, at the Las Vegas edition of SAP TechEd 2018 it had a  prominent presence with the App Space and the Developer Garage, where folks could come by to chat and learn. More than that, though – Jon says:

“A healthy community is the core of what a modern software company needs to succeed […] it’s not a nice-to-have at all.”

This resonates very well with me. Not only because I’m proudly part of Thomas Grassl‘s team that is behind the Developer Garage and the tutorial missions in the App Space, but also because I believe that the community is the place that will keep us sane, keep us on the right tracks and help us support and learn from each other. That community, like my fellow first year pupils at William Hulme’s, is full of folks who are in the same situation, and who implicitly – and sometime explicitly – help each other to survive and grow in an initially unfamiliar and sometimes perplexing environment.

When I put together one of the first mailing lists for SAP folks in the early 1990’s, when I got involved in co-creating the SAP Developer Network (what has become the SAP Community today) in the early 2000’s, I had a feeling that the communities that would form would likely be key to a greater understanding and sharing of knowledge. With the SAP Community today we have a rebooted environment with the great Craig Cmehil at the helm, and a wide array of offerings, including my favourite which is the Developer Centre with a whole heap of tutorials, groups and missions (with progress tracking and a great new look and feel), alongside developer resources and downloads.

There’s still work to do in the reboot, but we’re going in the right direction for sure. The main ingredient for success, however, is not any particular community website or feature. It’s you. Us. We’re all travelling the route to school together, from different locations, but with similar thoughts and wonder, and we’re converging as we walk up the path in the morning, through the rugby and lacrosse pitches to the school buildings to learn & master new subjects, and to grow together.

This post was brought to you by the clackety clack of my new Vortex Race 3 mechanical keyboard (with Cherry MX Blue switches, oh yes) and Pact Coffee’s El Silencio Espresso, in my SAP Coffee Corner Radio mug. Have a good week!