SAP marketing cloud Segmentation Model enables to identify the right target group of audience by segmenting high volumes of customer data.. These data sets are in the form of attributes and attributes sets.

Segmentation models can be built by the use of interactive visualizations, filter criteria derived from selected data source or predefined templates.

Segmentation model allows to use filter attributes, and filter operations for the Customer segmentation. From any segment, user can create a target group that includes the set of customers  those determined in the segmentation. Those Target groups once released can be used for further SAP Marketing cloud applications for example, to create a Campaign, which can be used for a marketing campaign in SAP Customer Relationship Management.

Segmentation Models Creation based on Attributes:

Below Fig. draws the Segmentation Model based on various attributes filtered by Region, Channels, Gender, City, Age etc. This can be further filtered/segmented by different key Attributes parameters.

Users can able to perform add, Remove and recalculation actions for segment and sub tree from Segmentation models. 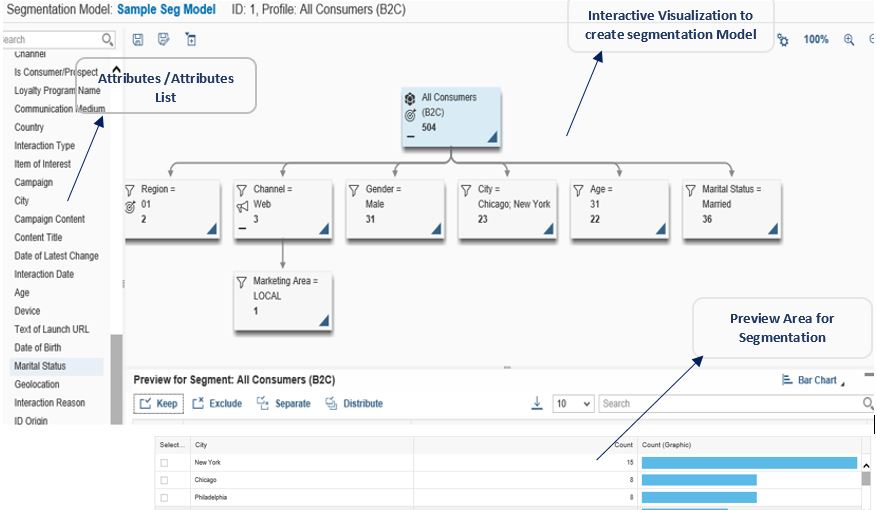 Geographical maps can be assigned to attributes containing Regions, city and country codes. In below Pic, segmentation based on Geographical map has been linked to Region NA. Users can define the Radius within given location.

User can create segmentation models based on Key object upload for example a List of Customer Number of List of customer GUID.

Key Figures values can be visualized in the preview panel in the form of graphical chart.

From Segmentation Model, Targets Groups are created based on selected Attributes (say for example based on Region, City, Gender)

Campaigns function as marketing projects that are used to plan and execute specific marketing activities, for example E-mails or phone calls.

Campaigns can be created based Standard available template or can be customized based on Business Requirements: Pic below Campaign creation scenarios based on standard Templates: such as Email Campaign, Trigger based campaign, Mobile campaign, Transfer leads. 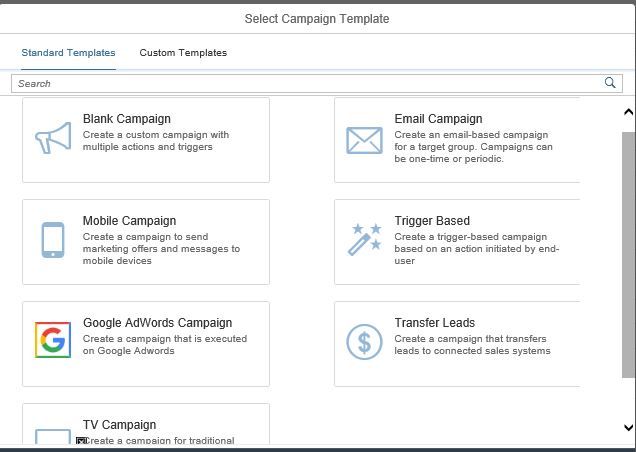 Below Figure shows creation of Trigger based campaign (File Export). Campaigns before “released” could processed under approval process. On successful approval, campaign status will changes to “Release” . Users can manually perform “Release” action from Campaign over view page.

Campaign SPEND view provides the details about the planned and Actual spend values for the campaign execution process.

Below Fig. shows the Planned monthly spend value for the campaign.

Marketing Programs  are created with reference to the selected campaigns which defines the Planned Spend. Actual Spend types are derived/resulted based On successful execution of campaign.

Users can execute campaign based on Email Below pic. provide an Campaign execution scenarios based on Export File.

As a result of campaign execution – File export methods, 3 records (leads) has been identified. Record logs can be downloaded from the export History as highlighted below.

To access the SAP Marketing Cloud open courses or to access Startup guides on Marketing, we need to navigate to the SAP Learning Corner.

Thanks Azad for the blog!