Where in the World is Carmen Sandiego?

Ahhhh this was probably one of the first computer games I ever played back in 1985… for those not old enough to remember, in the game you were a rookie detective that using your knowledge of geography have to track down villains that kept jumping from city to city until you finally caught them, the aim of the game was to slowly make progress towards the main target, catch their leader, Carmen Sandiego.

The hours I spent, tracking all those criminals until finally arresting Carmen Sandiego, Nostalgia now but it was truly an addictive game at the time.

Funny enough for quite a few months now I’ve been having a flashback, call it a deja vu… this happens to me every time I try to locate SAP Basis questions on the community, I end up jumping from tag to tag, chasing them with limited success, its highly frustrating and I bet Carmen Sandiego was easier to find 33 years ago!

I remember when I started contributing back in 2006 I found the same problem with the old SAP Developer Network, It was difficult to identify a topic to post to because at that time the site was focus at…  well… developers, so what ended happening is that the Basis crowd hijacked the topic SAP Netweaver Administrator, this area was initially oriented to NWA questions but because it sounded familiar to most SAP Basis Admins It became the area which our people gravitated towards and we got to call it HOME.

A few years later in 2011 I posted a blog as the proliferation of “topics” was starting to ramp up, the blog was calling for a rebrand to give Basis consultants a explicit place to post…

The blog gathered quite a bit of support but it didn’t take off, we had a home anyway and around that time we also create the Basis Corner page on the Wiki which was a repository for additional content…. all good.

Fast forward a few years and SAP Community was created, it was by all means a step forward from the aging SCN site, but the initial hype was short lived and with 3000+ tags and some bugs the community took a big hit and a lot of contributors like myself were left homeless.

Since then and slowly the SAP Community team has done an great job consolidating the initial river of tags into a more manageable number. The latest changes, new design, new profiles, plus the return of gamification is in a way paying dividends and it does feels like the community is starting to react to them and the volume of traffic and questions is on the rise!

For that a big thank you…

But (there is always a but) we lost a lot of contributors on the way and even though the old SAP Netweaver Administrator tag is still available, no-one posts there anymore and my 2011 blog remains as valid as it was back then.

A new Basis primary tag that can be combined with a secondary tag of choice would close the issue for good.

Until then the question remains,

Where in the World are the SAP Basis questions?…

Love to hear your thoughts

Yeah, I think that would make sence!

If something makes sense - it is rarely done.  Common sense isn't common these days.

Ah, John Prine lyrics always make me smile, especially today when he's nominated for the Rock and Roll Hall of Fame for the first time. Common Sense is the title song from his 4th release.  I'll leave searching the lyrics to your discretion.

It's also the title of an 18th century Thomas Paine pamphlet; perhaps best to leave that idealism for the hoi polloi (i.e. not Basis admins). ;-/

Come on Jim....  give me some credit for the Carmen Sandiego metaphor, not as classy as the lyrics of a folk singer... but hey, its not bad

I loved the CSD theme song, and the PBS show.  The computer game, not so much.

I had this very thought in my mind when posting, but I didn’t want to say it out loud!

(Thanks for reading between the lines! ).

Be glad it's not Where in Time is Carmen Sandiego?

Hasn't NW been recently dropped as well to be SAP ABAP Platform?

I see your point regardless. Security got a tag as well as the security products and NW Authorisations and NW Authentication so why can't Basis?

Spot on, it works well for SAP Security…      BTW, there is still a BASIS component in S/4 so BASIS admin lives on.. 🙂

Is there such a thing as an ABAP developer anymore?  Or is it just SAP Developer.

Totally agree a place for you to call home would be nice.  It's interesting though - when I have time, I don't really stick to a tag.  ABAP development has been around for a long time.  But you can still see "developer" type questions in other categories.  And sometimes...  sometimes mind you.. I can answer other questions.

So maybe that's it! If you have to go from tag to tag then you are "forced" to answer questions in the other tags.  Or at least to see them.

As always google is a good friend of mine.

Ohhh Michelle… where do i start?….  everyone knows you have to be nice to the basis guy, well that’s if you value a peaceful existence ?

As much as I love wondering around and diving into endless pools of “non-basis” knowledge… the average basis is usually quite focus, bordering OCD (or like in my case more than bordering), we appreciate a good solid routine, if you know what i mean…  ?

Basis does need it's own Home.   I totally agree with you.

Honestly I have some friends who are "BASIS" type people.  I think they are called system administrators.  They have more than enough to do just keeping the system running.  Not to mention all the other fun stuff they do on a regular basis. 🙂  They do a lot.

One of the nicest ones I know (He's retired now) showed me the advantages of looking and reading a trace.  That was back in 3.1H.  A while ago anyway.  He was keeping an AS/400 running smoothly, SAP running smoothly, and trying to help us new SAP developers.  He was and is still amazing.  It's not something I'll ever forget, and to him it was probably just doing his job.

Since then I've meet many of those amazing people.  I really didn't know you'all didn't have a home.  You need and deserve one.   I have no idea who you ask to have a tag added.  This blog is probably the right step.

I've actually already started the process to find out about adding one,  I'd like to say it's a simple process but as we are not the only consumers of the tags used by our system it does require some conversations.

My hope was to reply to the blog when I had good news but also did not want to keep everyone waiting too long.

That is awesome Craig, I do believe it will make a difference, I even volunteer to moderate the tag.

PS: Can we have Basis as a Topic the same as the Security tag?

Can you please let me know when there is an update?

I know things are busy with Teched, etc...

I have an email telling that the request is completed as of last night, now this is the first time I‘ve done the process so not sure if there is another step or if it‘s available right now.

Hi Craig, I just checked and Basis is not available as a tag, can you ask what tag did they created?… Thanks, JP

Yep my bad on this one, the team has been educating me on the process and the tag is not yet through into the system. TechEd slowed things down but they are on it and I am monitoring to be sure I understand the process fully and where we might be able to speed things up.

So to close it out, the tag is now available. I learned a lot about the process, we've made improvements to the process but I can tell you I will be very selective going forward before agreeing to new tags - there are so many other groups involved/impacted by adding these that we need to be sure that we don't cause issues for others by throwing a new one into the bunch. 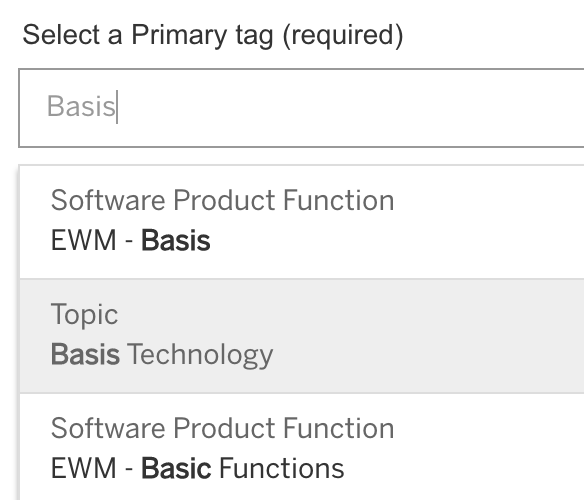 Fantastic Craig...  Lets see if this works for the Basis community...I start pushing this out immediately.

I've been using (or perusing) the "SAP NetWeaver" topic/tag as the defacto "Basis Home," but there are a whole proliferation of sub-tags under that, some of which are Basis-oriented (SAP NetWeaver Application Server for ABAP (which also gets lots of ABAP Development questions), SAP NetWeaver Application Server for Java, etc), and some of which are somewhat less so. So, yeah, there isn't really one cut-and-dried, obvious, and only, tag for that nebulous thing called "Basis."

My title, by the way, says "Basis Systems Administrator" in it.

Now that Craig is working on getting an appropriate tag created, should we start lobbying for how the tag should actually read?

Hey Matt…. let’s not complicate things…. lets call it “Basis”… so it immediately pop up when filling the primary tag  😀

Also, the title suits you!

I don't know, if we make it too easy, then ANYONE can do this, and where does that leave us? 😉

You are right, lets make it very confusing… ohhh, wait… ?