SAP Cloud Integration offers capabilities to validate the XML payload against a given XML Schema. XML Validator (version 1.x) can validate XML against the XSD schema 1.0.

With September 2018 release, this validation capability has been enhanced to provide the support for XSD  schema 1.1 as well. This release is planned to reach customers after September 30.

In this blog, I would describe distinctive features of XMLValidator that helps you to validate XML payloads.

Consider a scenario where you want to stop processing the message as soon as the validation error occurs. For demonstrating the scenario, I created a simple integration flow as shown below:

XMLValidator: Browse the XSD and keep the Prevent Exception on Failure checkbox unchecked. 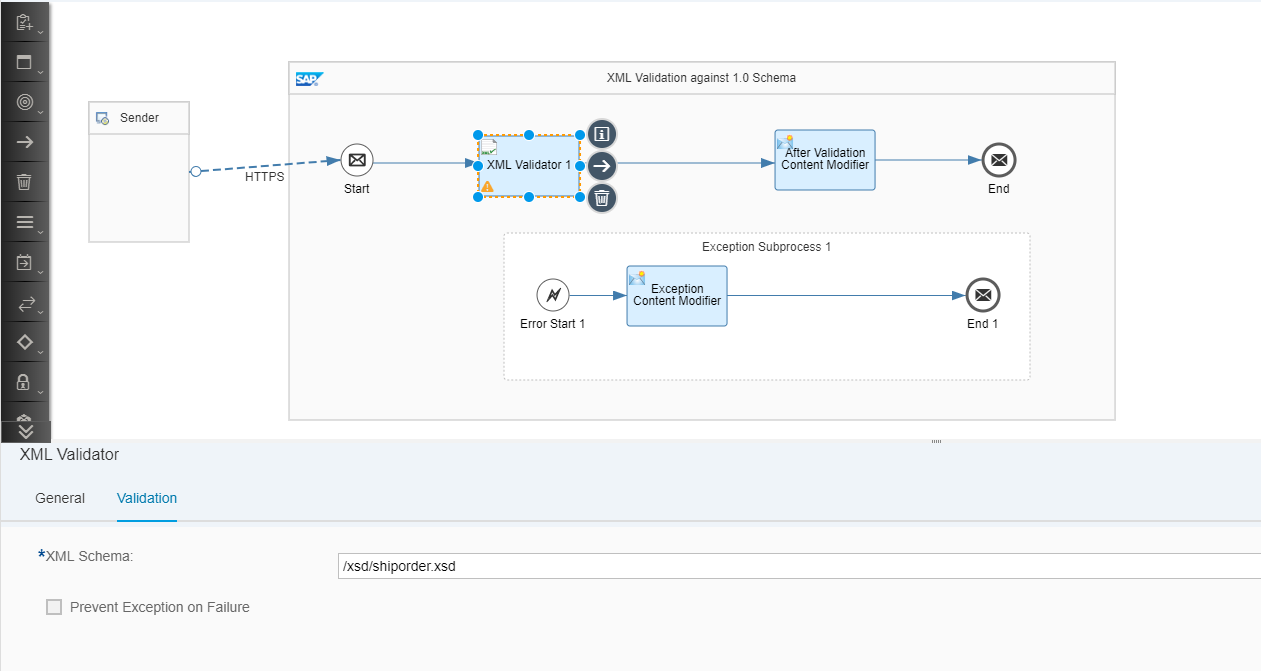 Run the scenario with a Validation error:

You would see the exception from the Exception sub process as shown below:

Tracing of the message flow looks as shown below:

Consider a scenario where you want to continue processing the message even after the validation error occurs on XML Validator.

For demonstrating the scenario, I extended the above integration flow as shown below. 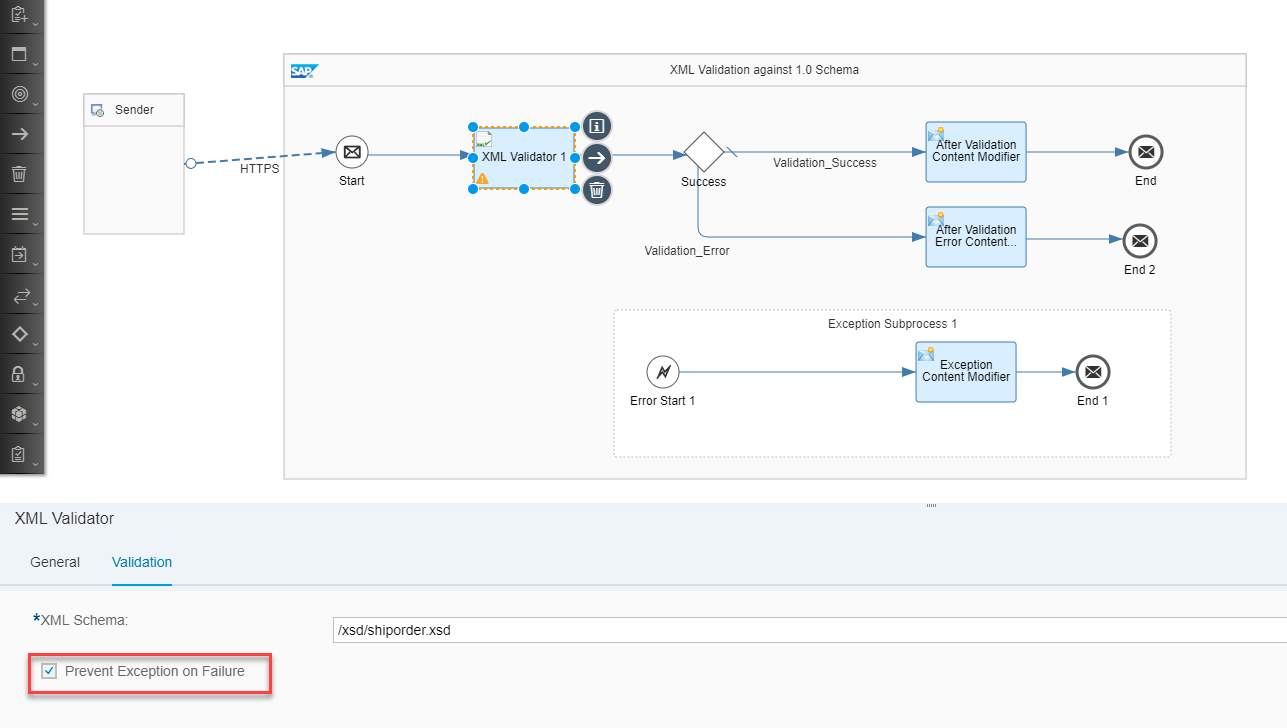 Create a router with a condition ${header.SAP_XmlValidationResult} != ‘null’ to handle the scenarios in case of validation failures .

Once Prevent Exception on Failure option is checked,  the processing will continue processing without throwing an exception. You can handle the validation error scenarios with a route condition as shown below: 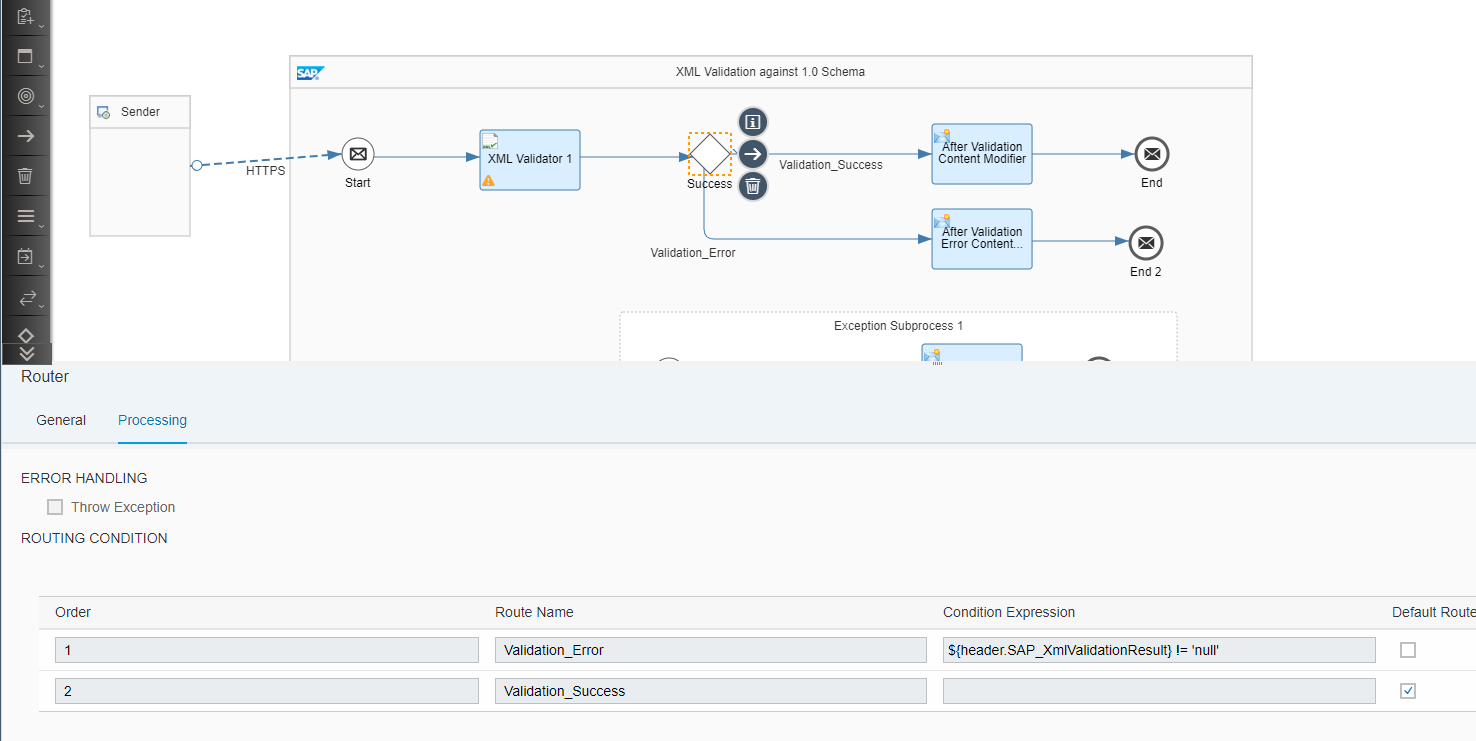 Run the scenario with a Validation error:

You would get the output from Validation_Error route as shown below:

Tracing of the Message flow looks as shown below:

NOTE: The Validation Result is also available as an attachment in the Message Processing Log.

XML schema 1.1 comes with a lot of features like Assertions. SAP Cloud Integration started supporting XSD 1.1 with XMLValidator (version >= 2.x). For more details on XML Schema 1.1 features, you may refer the documentation .

In the above example scenario, consider that I would like to introduce another conditional validation on minprice and maxprice. The condition that I want to apply is minprice should be less than maxprice.

In the xsd, I just need to introduce a condition <xsd:assert test=”minprice le maxprice” />

On running the scenario, you would get the additional assertion validation errors as shown below:

We learnt about different capabilities of XMLValidator with examples from different scenarios. See you again with another blog on exciting new features from Cloud Integration!

I tried out your solution and it works great. Only issue is the router condition should be ${header.SAP_XmlValidationResult} != null

because in your case it seems to be matching the SAP_XmlValidationResult to a string that is 'null' and not actually null. In your solution it goes to the failed route for both a success and failure scenario.. you can reproduce the same in simulation mode.