OUTDATED – this article’s content has been superseeded after the introduction of improved MultiChain-integration with SAP Cloud SDK 2.13.2.

Disclaimer: This blog post is only applicable for the SAP Cloud SDK version of at most 2.19.2. We plan to continuously migrate these blog posts into our List of Tutorials. Feel free to check out our updated Tutorials on the SAP Cloud SDK.

Updated May 2019: Added note to the fact that this article’s content was superseeded. SAP S/4HANA Cloud SDK transformed to become the SAP Cloud SDK: All references have been updated.

Note: This post is part of a series. For a complete overview visit the SAP Cloud SDK Overview. Furthermore, an extended version of this blogpost is part of the book Extending SAP S/4HANA. 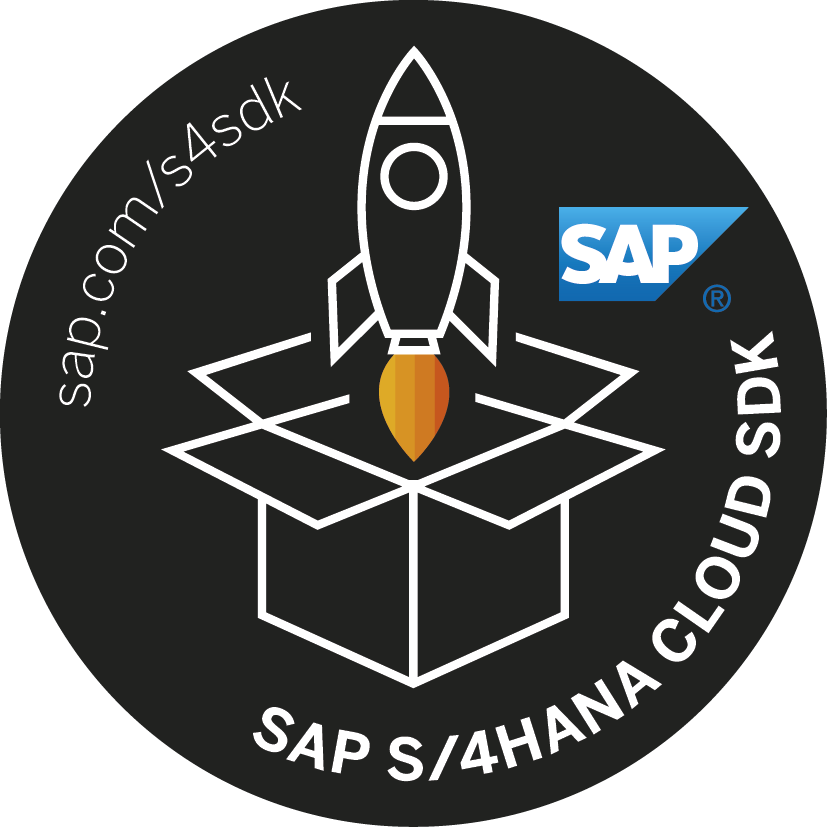 Blockchain is a concept and an architecture based on distributed ledger technology to record and share data across a multi-party network. It integrates data from multiple sources and creates a single, trustful truth. In doing so, it promises to provide powerful advantages for businesses, leading to increased efficiency and simplified processes.

Cases such as Blockchain-based pallet management and Farm to Consumer traceability implemented by SAP showcase the potential. Blockchain will change the way we do business – from point to point interaction to a true network of business objects and entities.

SAP drives the value-adding Blockchain with products such as SAP Cloud Platform Blockchain, which provides maximum flexibility with the support of multiple advanced blockchain technologies like Hyperledger Fabric and MultiChain. In this article you will learn how to integrate one of those technologies with your S/4HANA side-by-side extension: MultiChain. The availability of multiple technologies provides you options to follow and be on top of the continuing development of blockchain technology.

The starting point is the generation of the hello-world application template with maven (see Step 3 https://blogs.sap.com/2017/05/19/step-3-with-sap-s4hana-cloud-sdk-helloworld-on-scp-cloudfoundry/ for a detailed introduction):

The project is directly runnable after its creation: A hello world servlet is provided for quick and easy testing. This is what we will leverage now to quickly continue setting up and testing our environment. Compile and run the code for a quick initial test (in application subdirectory):

The service should be accessible at http://localhost:8080/hello . Continue to deploy it to SAP Cloud Platform (in main directory, where manifest.yml is located):

For this blog post we’ll use the MultiChain service of SAP Cloud Platform Blockchain. It is a leaner Blockchain platform, focusing on support of digital assets and using the Blockchain as a log of information. So if your use case only requires digital assets or storing hashes in a tamper-proof and timestamped log, then MultiChain is for you! If on the other hand you need a full-fledged smart contract platform then I recommend you to divert your attention to SAP Cloud Platform Hyperledger Fabric – there is a similar blog post available: Deep Dive 14 – Integrate SAP Cloud Platform Blockchain using Hyperledger Fabric into a Cloud SDK application.

In a sign of its simplicity when compared to Hyperledger Fabric, MultiChain only requires one service to be set up and bound to your application.

Go to the application overview screen for your newly deployed side-by-side extension skeleton app. You can find it in the SAP Cloud Platform Cockpit for production – at this time the service is not available on the trial edition.

Now go to the ‘Service Bindings’ screen, and hit the button ‘Bind Service’. In the opening dialog select to add the service from the catalog, and search for ‘multichain’ in the search form: 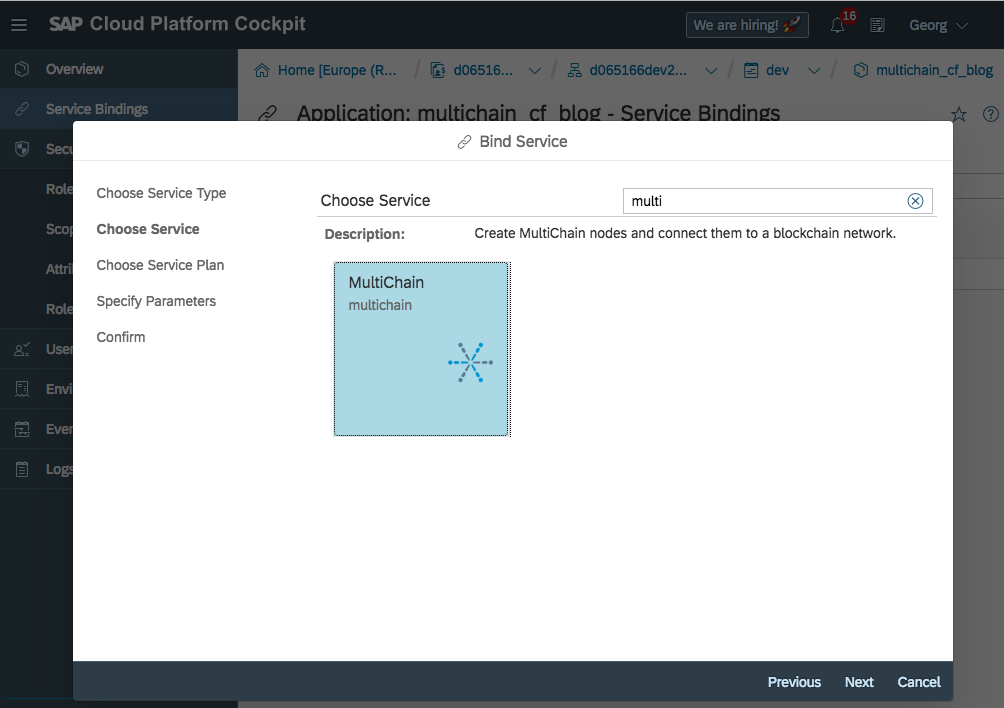 In the following screens select the service plan you would like to use – at the time of writing it was ‘dev’. Then go ahead without specifying specific parameters, choose a service name, and finish the binding.

Open the project skeleton generated before with your favorite IDE, and browse to the HelloWorldServlet. You can generate project files with maven, too:

The SAP Cloud SDK provides the MultichainService class to facilitate access to the SAP Cloud Platform Blockchain MultiChain service. It makes use of other facilities provided by the SAP Cloud SDK: ScpCfServiceInfo and reusable HTTP clients.

With this class creating code that uses MultiChain functionality in your application becomes very easy. In the given example data is written to and read from the default stream. Keys are employed to make the stream usable like a key-value store. Please find further information in the official MultiChain API reference .

To use the class add the dependency to the application/pom.xml file:

To create the servlet, copy the HelloWorldServlet class to a new servlet named, for example, MultichainServlet. Modify the @WebServlet annotation to register the servlet on a new path, say @WebServlet("/multichain") . Then change the doGet method to read:

With this code the servlet provides a straightforward interface for reading and writing hexadecimal data to the ‘root’ default stream of the MultiChain Blockchain accessible via Cloud Foundry service information.

First the key parameter is read from the request. Then an instance of the MultichainService class is created that facilitates access to the MultiChain API. This class is available in the com.sap.cloud.s4hana.services:scp-blockchain dependency added above in this blog and you should have added it when following this blog from top to bottom.

The MultiChain API commands requested can be found in the MultiChain API reference : publish allows writing a value entry under the given key in the given stream. Here we use the ‘root’ stream, which is available by default in any MultiChain installation. Be aware that the MultiChain API requires data to be in hexadecimal format – this is very fitting for the main use of this blockchain data facility: Writing hashes to the chain. Hashes are regularly printed in human-readable hex code, instead of their raw byte values. The result of this operation will be the id of the created transaction.

liststreamkeyitems gets all entries under a specific key in a specific stream. It will list everything ever written under the key together with the id of the transaction that was created by a write operation. See below for an example of the output. But let’s produce the output ourselves, too: Now you can compile and run the code for a quick initial test (in application subdirectory):

The service should now be accessible at http://localhost:8080/multichain?key=k1 . You can even deploy your application to SAP Cloud Platform (in main directory, where manifest.yml is located):

Be aware that also here, if you don’t set up the security environment required for production that provides tenant information (see Secure your application on SAP Cloud Platform Cloud Foundry ) you will need to mock auth headers:

The resulting microservice is very simple but hopefully very transparent and instructive. Here is a test from a browser:

In the example you can see you can see two results stored under one key. You’ll see that the order is oldest->newest, verifiable with the ‘blocktime’ property. By the way, it’s a unix timestamp and an entry without blocktime is not yet confirmed and written onto the blockchain. See for example ‘getmempoolinfo’ in the MultiChain API reference regarding this.

To write to the blockchain use for example this query parameters:

Now go and write cool applications with these features!

A simple first addition would be a parameter ‘value’ with which non-hex-encoded strings can be used. Hint: This is how you handle hex with Google Guava:

For your reference here you can find complete code for the servlet: