A World without Tupperware

We all have a perfect world, a world where our personal pet peeves would not exist. I’m the person who re-organizes the dirty dishwasher so the plates and bowls line up – it’s not an OCD thing for me, it’s merely a capacity issue. I want to maximize the amount of dishes, minimize the use of water and detergent, and the best way to do that is to strategically align the parts in the dishwasher.

So what’s wrong with Tupperware? Well, first of all, there is the age-old dilemma of alidscoliosis, or never finding a matching lid. It’s very similar to the sock issue – I have a theory that all those single socks are partying with the lids, most likely on a roof top bar. Just a thought. 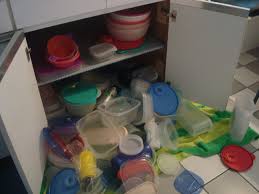 But the lid thing is merely a symptom. Even if the lids were permanently attached to the bases, the Tupperware would still exist, taking up space. My main problem with Tupperware is their very essence for existence – they exist to hold leftovers. At the end of every week, I go into the fridge and throw out all the leftovers that no-one ate. It’s estimated that 30-40% of food is wasted in the United States, representing over 130 billion pounds and over $160 billion.

So let’s work on this supply chain. If we eliminate the storage vessel, then the manufacturing process has to be adjusted, classic balance of demand and supply. Tupperware merely represents a working capital challenge, or days on hand of finished goods. In my true manufacturing days, I was the production manager for a polymers resin plant – I had to manage my storage tank farm. I had 24 storage tanks, and the plant produced 60 products. I did not have a storage vessel for each product. Naturally, the higher volume products would justify a storage tank – but this was not always the answer. In some cases, my demand was very predictable and I could match production with logistics and bypass the need for storage. That way, a lower volume product with less predictable demand might warrant the storage tank.

With that in mind, I tried an experiment at home. I cooked the meal, put the amount on each plate per the anticipated demand (two teenage boys, one prepubescent growing daughter, and a wife who looks great but always says she needs to lose 10 pounds), and refused to allow seconds or leftovers. Day 1 was ok, but I noticed that the cereal supply was dwindling at night. Day 2 was spinach ravioli, an arugula salad from my garden, and a loaf of bread. So far so good. Day 3 was flounder, asparagus and baby potatoes. Uh oh. Slight miss here, but I was determined not to use any Tupperware, so I personally ate 1.5 pounds of flounder, 1/3 pound of asparagus and the potatoes were evenly proportioned. Cereal supply continues to dwindle, and I noticed even the rice krispies box was open. Day 4 I was home late, so my wife cooked – meatloaf, mashed potatoes, green beans. All good stuff, but she wasn’t in on the experiment – portion control was shattered, and the Tupperware made a guest appearance. Day 5 was spaghetti and meatballs, also with a side salad. Spaghetti comes in a one pound box, so it doesn’t really make sense not to cook the entire pound. Also one pound of beef, with an egg, bread crumbs and parmesan. And then the large can of sauce – need enough sauce to cover the meatballs. Ok, so just one exception – everybody likes leftover spaghetti and meatballs, right? Day 6 was the weekend, so we ordered Chinese food. Now Chinese food is simply not fair – it comes in Tupperware-like containers, and it normally tastes better on day 2 or 3. Day 7 was a free for all – sometimes if the kids are hungry, they need to fend for themselves. Cereal was gone, peanut butter and jelly was taking a hit, and the grocery list was growing.