For anyone who has been reading or doing something in the S/4 HANA cloud since the 1705 release, the phrase above will not be something new. However, for someone who doesn’t, simply put, it is a digital assistant for the enterprise.

SAP has taken the conversational UI to the next level with the introduction of the SAP Co Pilot. Like the Siri from Apple or Amazon’s Alexa, a SAP business user can chat with SAP Co-Pilot, ask questions and pass instructions to it.

The key capabilities of the SAP Co-Pilot are, but not limited to:

With SAP Co-Pilot being released for the Apple iOS, one can use it on the mobile device or as a SAP application on the Fiori launchpad. As a digital assistant, Co-Pilot offers an easy way for the user to interact with the S/4 HANA system in a natural language (NLI – Natural Language Interaction), as if talking to another colleague who is working on the system. This is available from release 1711 onwards.

Launching the SAP Co-Pilot
The Co-Pilot can be launched by simply clicking the icon, at the top right of the Fiori launchpad.

With the SAP Co-Pilot, the user experience for the enterprise is taken to the next level. Imagine a purchase manager who has is supposed to approve a purchase for more than a million dollars, but he is driving at the critical moment. With SAP Co-Pilot’s voice recognition capability, he can not only view the details of the purchase order on his phone, using voice instructions, but also approve it on the go. The SAP Co-Pilot does not only make it faster, but also simpler to run some of the most important business functions of the enterprise. 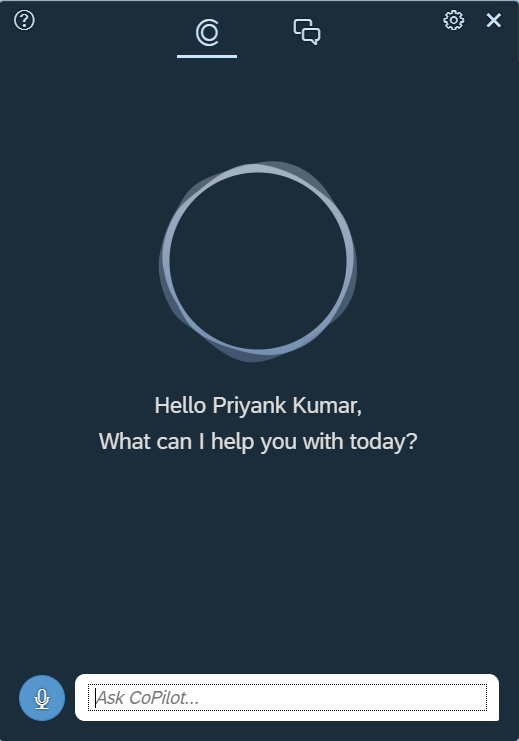 Whatever that the SAP Co-Pilot does or should do has to make business sense. But after all, it only helps you to run an intelligent enterprise. Don’t expect it to carry out anything and everything that you tell it to do. It works on business and user context and carries out the relevant business functions from there. Expect it to take instructions to approve or reject leaves, approve purchases, buy a new laptop and so on, but don’t expect it to move stock, just because you ask it to do so. It won’t do that, or at least not just yet.

Below are some typical business cases / roles where the enterprise users can derive value out of the SAP Co-Pilot.

You can, now, actually “Ask” the Co-Pilot to get you, for example, how many cars you sold in the last month, or how many are expected to be sold in the next. And with the voice recognition feature built in now, interaction is much easier and is as easy as passing verbal instructions. One can query business data or even create or change business data.

Simply put, there is a lot you can “Ask” the SAP Co-Pilot, and it does have answers. Well most of the times, the right answers.

Your SAP Co-Pilot is continuously learning, acquiring new skills, every quarter. For a business user, it is a way to get information out of the system quickly, even quicker than just a few clicks here and there. Developers love it as they can offer their users options to customize how it displays the information and which information to display.

What next … SAP Co-Pilot?

While working with the SAP Co-Pilot does sound cool, I wish I could ask the SAP Co-Pilot what it is going to bring me in near or distant future. Some questions I might want to ask it, could be

You are doing well Co-Pilot, but I look forward to more from you……Keep growing!!

Thanks Priyank for sharing this, very interactive and collaborative the blog is being presented!

Great documentation for the community, thanks!

Thanks for sharing, quite informative