Cardinality of Association in CDS View

Purpose of this blog:

This blog explains how the Cardinality of Association in ABAP CDS View works.

This blog explains how the internal behavior is changed by the setting of Cardinality in Association.

My motivation to write the blog:

Association is one of the main strong characteristics of CDS View and cardinality is set for the association. Many would wonder what it is, and I think more concrete explanation would be needed than the existing ones.

Cardinality is the relationship between the source and associated CDS View (or table) , included in the definition of the association as [min..max]. See SAP Help in detail.

To avoid undefined and platform-dependent behavior, the cardinality should always be defined to match the data in question.

The specified cardinality is evaluated by the syntax check for paths specified in the CDS DDL of CDS or in ABAP SQL. A non-matching cardinality usually produces a syntax check warning. For an association using the default foreign key (see below) the target cardinality must be [ 0..1 ] or [ 1..1].

The CDS compiler technically only distinguishes the following cardinalities:

Providing more detailed information (like [ 2..3 ]) is possible, but the CDS compiler does not make use of it. It is simply a possibility for the developer to document specific knowledge about the relationship.

Normally association works like LEFT OUTER JOIN internally. If INNER JOIN should be used, [inner] should be used in the fields added, e.g. _VB[inner].DOCB. In this case, associated view is accessed in any cases.

In the CDS View ZI_CDSVAB01, table ZDOCB is associated to the source table ZDOCA using association. Association key is DOCA.

In each test case, the cardinality of the association is changed and SELECT statement is executed to the CDS View ZI_CDSVAB01. In this SELECT statement, only the fields in ZDOCA are included.

(Take SQL trace with Transaction ST05 and display the trace. After aggregating the statement with the menu > Trace > Structure-Identical Statement, select the SELECT statement to access the CDS View, and run Edit > Display Execution Plan > For Recorded Statement.) 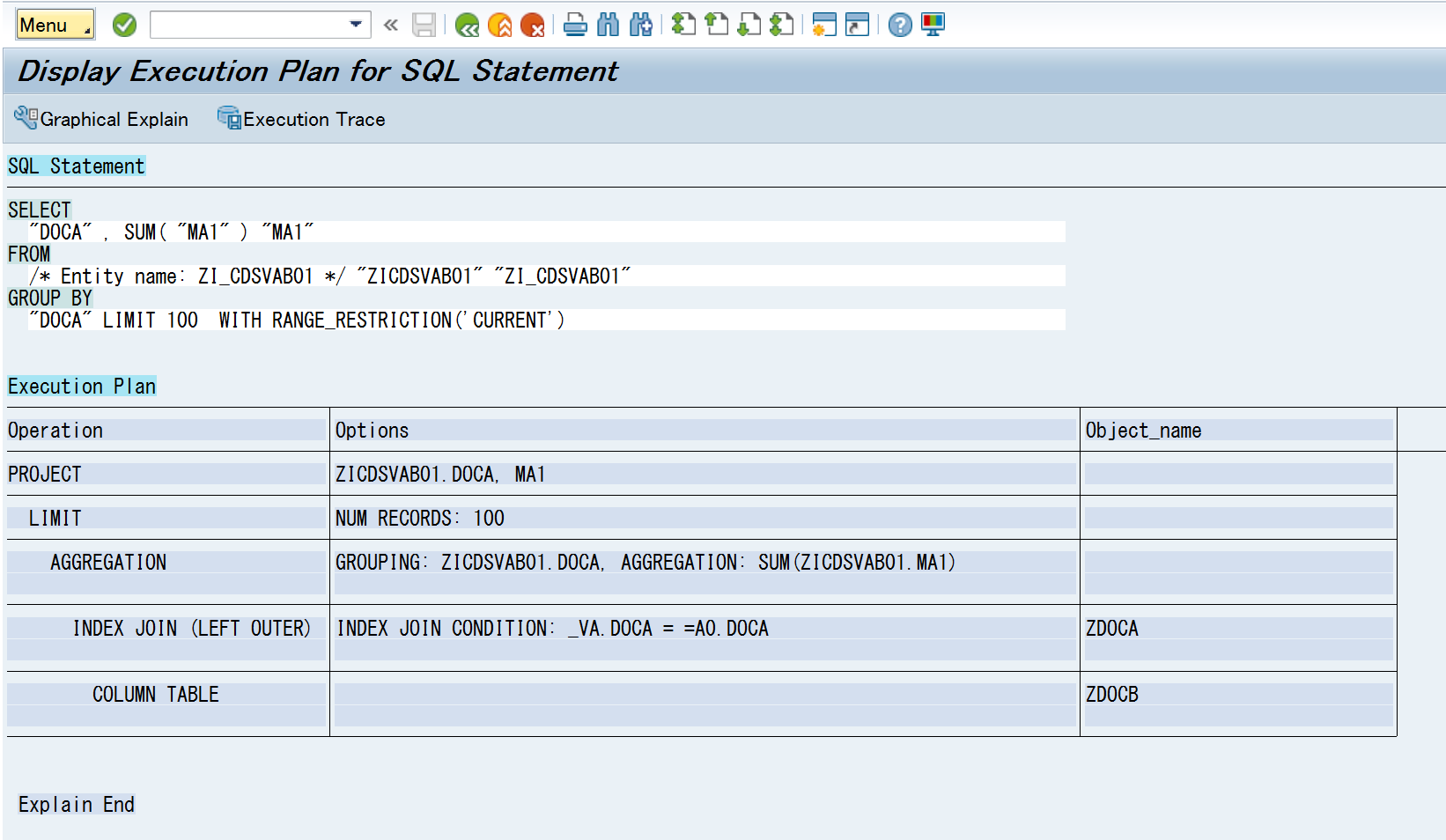 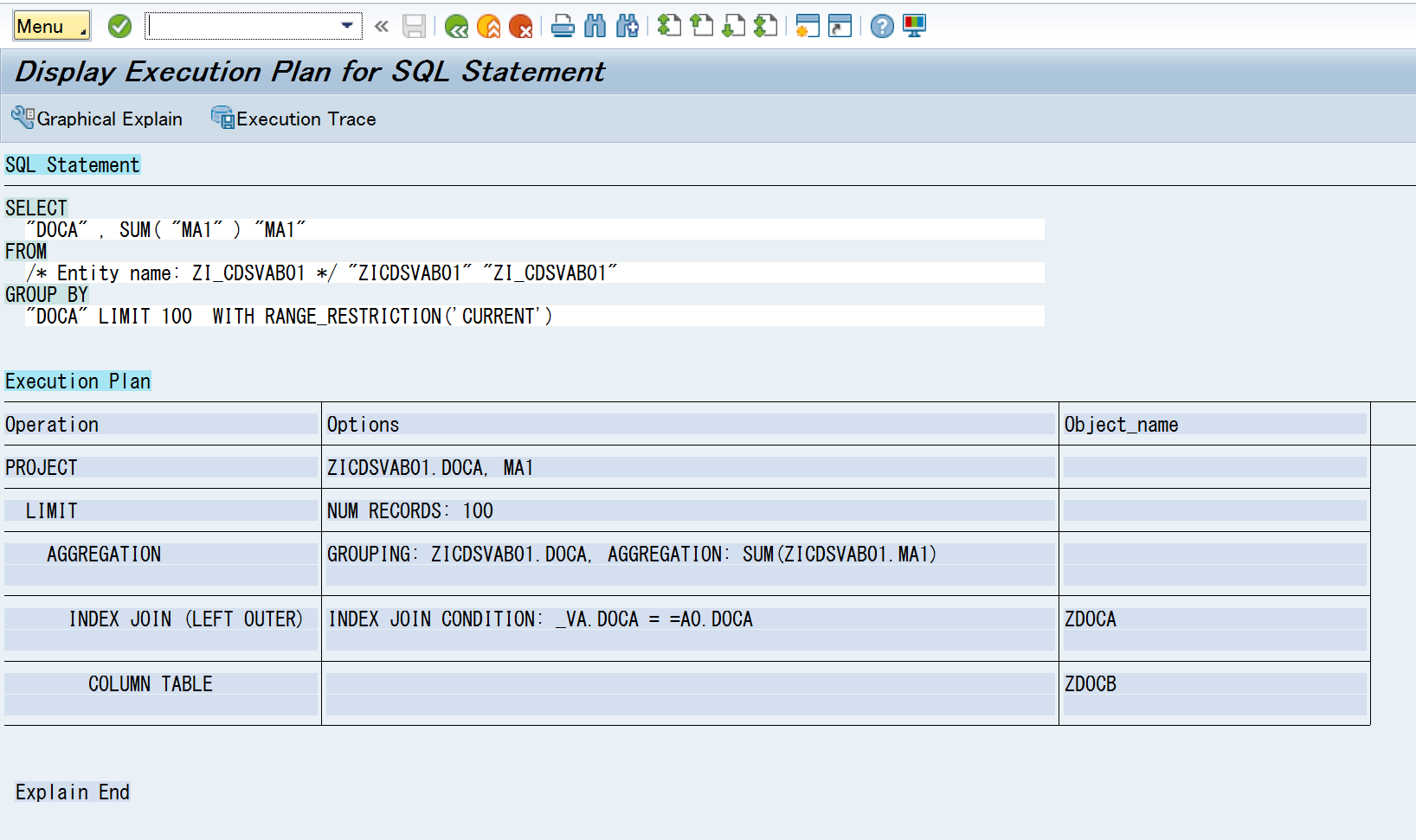 JOIN happens even when no attributes from the joined table ZDOCB are included in SELECT statement. 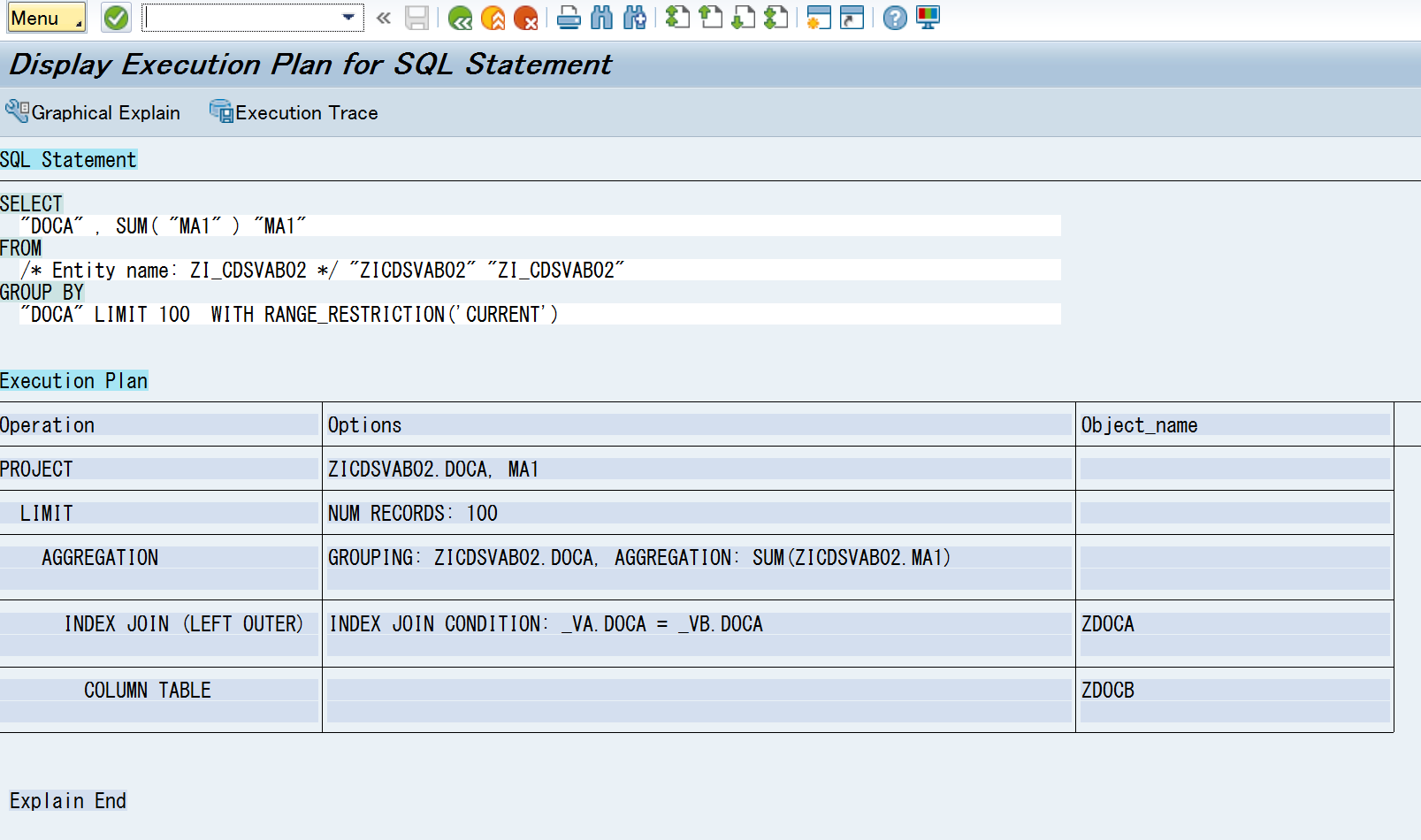 JOIN does NOT happen when no attributes from the joined table ZDOCB are included in SELECT statement.

See SAP Help about LEFT OUTER TO ONE in detail.

JOIN does NOT happen when no attributes are used from the joined table ZDOCA in SELECT statement. 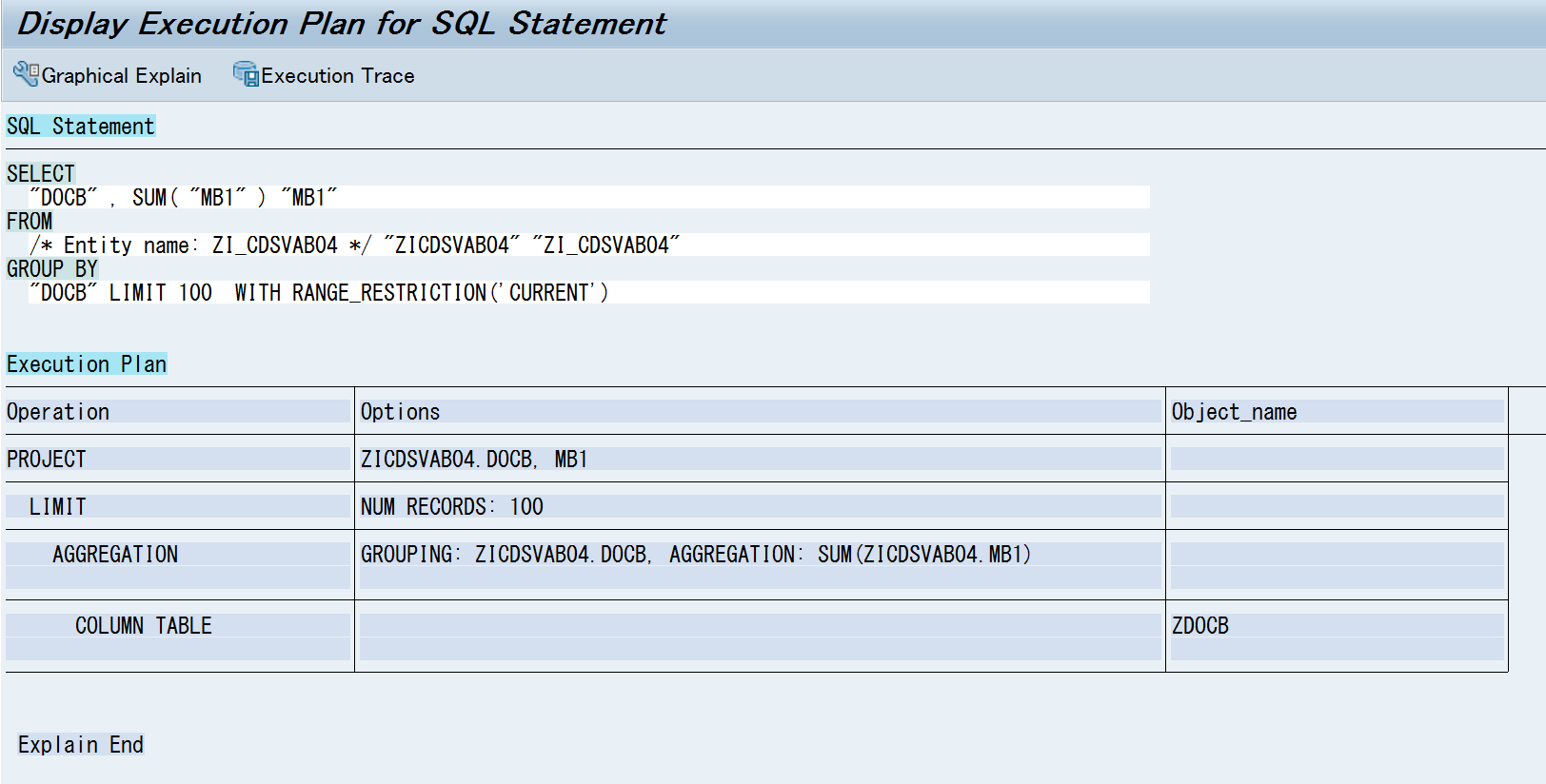 When cardinality is [n..*], it is not possible to use a field in the associated view (or table) in WHERE condition. 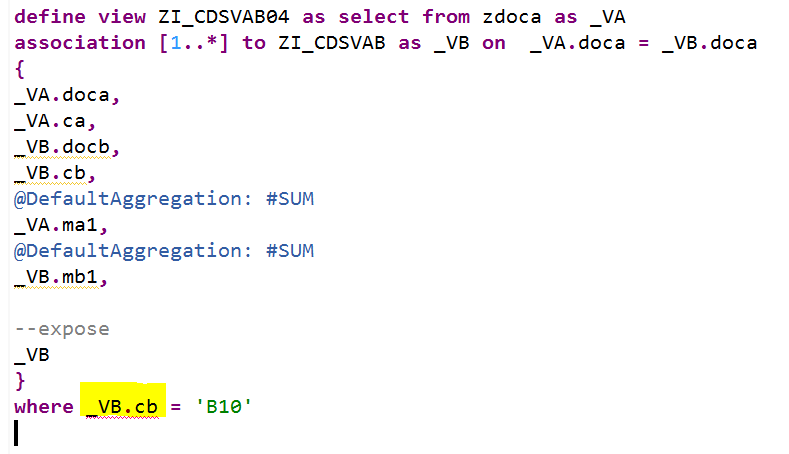 And it is not possible to add a field of associated view (or table) in Extend View.

Thanks for reading the blog!

HAVE U TRY ?WHAT'S THE CONCLUSION?PLS TELL ME

Thanks for informative blog.

Could you please let me know what is the reason behind always using Join when executing [0..*] or [1..*] cardinality even no field is used in the select query from associated view?

As per my understanding [0..*] or [1..*] would be normal if any field is used in selection list or in where clause from associated view

But even when no field is used from associated view and still join triggers, that i could not understand.

If relationship between left and right is 1:n, even when no fields are selected, the record might have to be multiplied intentionally, so Join has to be happening. However, when using [1..1], as the developer declare the relationship should not be 1:n, the system can skip the join process.

Too many typos, which makes it hard to understand the essence. In Test 2 description it should be

and in case 2), LEFT OUTER TO ONE JOIN is used

and in case 3), LEFT OUTER TO NE JOIN is used

Also it is better to place Test 2 definitions right before the test results, it will be more handy to compare them.

So if we have

I have an association from VBAK to_items to VBAP.  But I cannot do a search  VBAK  with to_items/matnr because of the 1 to many cardinality.

You have mentioned this above:

We do not have table functions on our system so I am trying to flatten the materials at the line item level into one view that I can link as an association to the header as [0..1] – but I am having some issues with that.  I was wondering if you have any experience with flatten child records to the parent level to get around this issue.

Have you ever found a case where the same CDS views would behave differently between HANA and earlier systems?

Sorry, I have no experience to create CDS View on non-HANA DB.

The limited information ST05 gives me is the same for both cardinalities on the older system.

I can't get more information because of this error:

Sorry, I could not help enogh.

But accourding to the error messages, it would be the permission issue in ASE layer. I found some SAP Notes with the term SETUSER, ASE.

I think it is efficient to ask help to ASE expert.

Thanks, this is the AS ABAP 7.52SP04 demo from SAP, I guess I'll post a question shortly.

My requirement is to add a Standard Field ANLA-IZWEK (Investment Reason) to the Asset History Sheet FIORI App.

I have added quite a lot Custom Fields to FIORI Apps using CFL, however, am clueless of how to add a Standard Field to filter Prompt & Dimensions of a Standard FIORI App.

Would really be obliged if you help throw some light on this.

Also, huge thanks for your very informative blog. Kudos!

or you can create wrapping view on top of the source of asset history VDM and associate ANLA in it.

Awesome blog . Very well explained. This helped me a lot . Thanks a Million Masaaki Arai.