For 6 weeks I struggled getting BOE 4.2 SP05 installed fresh on a newly created Windows 2016 virtual server. I finally figured out the issue. I thought it might be helpful to relate my experience.

The issue presented itself whenever I would choose my previously prepared 64-bit ODBC datasource (based on SQL Server 2014). 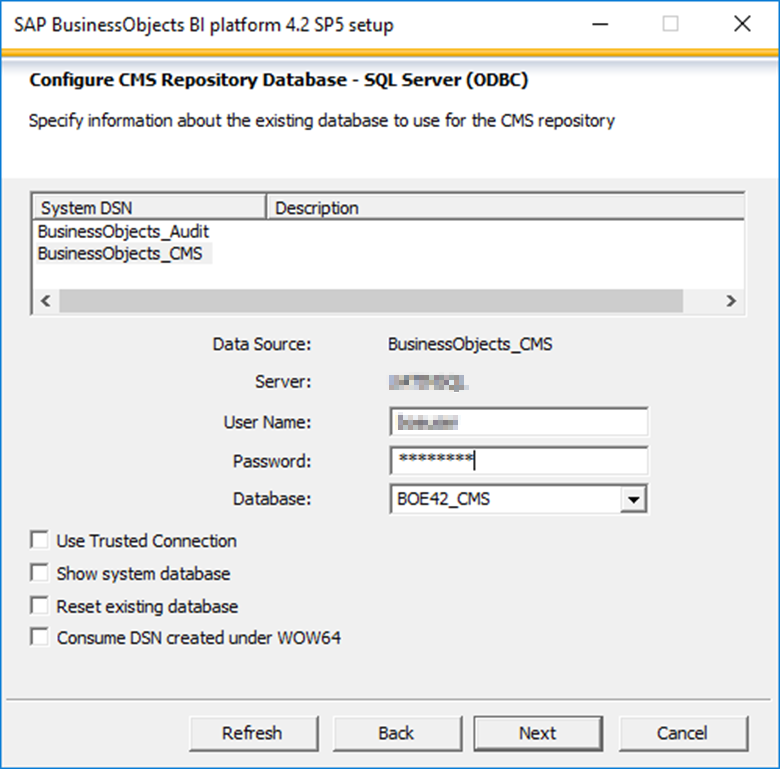 I would get the following error…

The mystifying part was I had run this same install on another server (idenitical virtual servers), but against a different database and it worked just fine.

I thought if I could create the tables prior to the install perhaps it would just skip over that portion since the tables were already there. So I scripted out the tables from the other installation that worked and ran it on the SQL Server I with which I was having problems. The install made it past that stage, but finished with errors.

I did open an incident with SAP in working with a support engineer we confirmed the issue was with SQL Server because we were able to get the install to work using SQL Anywhere as the database.

After some time away from the issue due to other tasks I had the virtual server recreated and tried again. I got the same result.

In talking over the situation with our internal DBAs one of them mentioned maybe the database server level trigger in place to track database object changes on the server was interfering with the BusinessObjects install. As it turns out that was enabled on the problematic SQL Server, but not on the SQL Server used for the first installation that worked.

With that database server level trigger disabled I tried the install again. IT WORKED! I then applied 4.2 SP05 Patch 2 and 4.2 SP05 Patch 2 Hotfix 2 successfully. I have a lot of configuration and content migration to do, but at least I have a system that is up and running.

I hope this helps someone down the road.

A KBA describing this situation has been created : https://launchpad.support.sap.com/#/notes/2683023

It tried that link when you posted it and I get this message...

OK, these things need approval and take some time, right? It has been 7 weeks and this morning I got an email from SAP Product Support - CIC stating that SAP Note 2683023 has been created. Yeah!

I can find it when I search for it by the number, but I get the same has as before (and still get) when clicking the link you provided. I did reply to the email I mentioned above.

Any idea what is going on?