The Splendors and Miseries of SAP Community

I’ve already written before about the lack of motivation to blog on SAP Community (SC). It’s been over a year but I don’t see any improvements. The blogging guidelines have been quietly swiped under the carpet. It’s not clear yet how this will help the quality of content or engagement. Anecdotal evidence suggests that the numbers of views, likes, and comments dipped even further.

But we can write and read blogs on many other websites and it’s not what this is about. So far SC is still the best place where one can find a good answer to many SAP questions. There has been no serious competition in this area and I imagine it remains attractive to the SAP customers.

However, since 2016, SAP managed to fail in attracting active new SC members and simultaneously succeeded in alienating the veterans. How did that happen?

The renaming of SCN to SAP Community in 2016 was one of the poorly thought through decisions. And constantly having to type “SAP Community” instead of shorter SCN is not its only ill effect.

But when we just proclaim everything and anything “SAP community” it seems to make it easier to not continue including the less “cool” parts of whatever “SAP community” is. “What do you mean SAP does not support SAP community? Look at all the spending and all the successful SITs and CodeJams!” – “Um, not THAT SAP Community…” – “Huh? It says ‘SAP community’ right here, sooo…”.

SAP also made it very clear that they want to aggressively pursue non-SAP developers and, ultimately, include them in “SAP community”. The cool kids are probably not going to want to hang out on the non-cool SAP Community. So where does this leave us, exactly?

The Platform is Broken

The half-baked re-design of 2016, rushed into production just so that a grand announcement could be made at TechEd, has not been an improvement for the SCN users. 2 years later, SC remains a tool equally frustrating for the veterans and newbies. (This is where full inclusion has already been accomplished, ironically.)

Change of The Guard. Or Not

Do you know that Jürgen L, perennial Top Contributor, one of the tenured and most respected SCN members, already left the building? It’s easy to see the result of his absence: 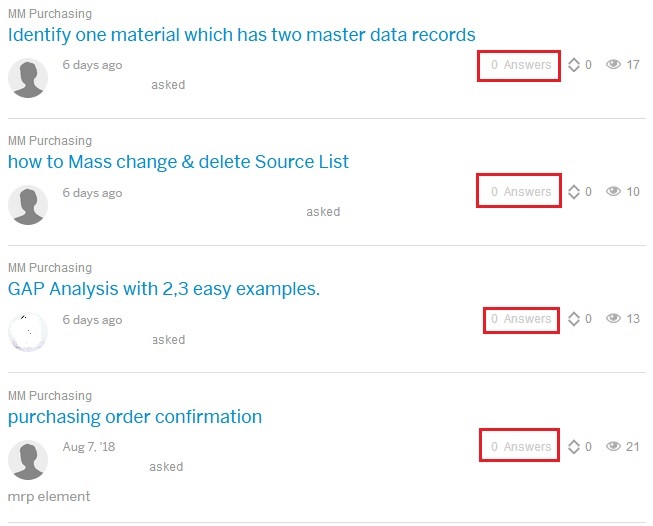 I ran the statistics from the 27 questions in MM tag right before the Jürgen’s departure.

It’s not hard to see that in many tags the same 2-3 people answer majority of questions. This just shows how much we rely on our most dedicated members to offer expertise to share.

One might say, oh boo-hoo, good riddance, time for the old fogies to step down and make space for the new generation. Fair enough. But where is this new generation?

The Stack has Overfloweth

SC is not the only online community going through the rough times. StackOverflow (SO) has been recently undergoing changes to address its reputation as an “elitist” place where no one dares to ask a question anymore.

One of the issues common between two communities is lack of guidance and support for the new members. SO makes use of technology to resolve that. SCN’s solution? Simply declare that from now on we will be “inclusive”.

While searching for a different perspective on the happenings at SO, I stumbled upon this old Reddit post. It is an illuminating read and if you’re truly interested in the community matters I’d recommend reading the comments all the way through.

The first comments support the image of SO as a cliquey website where one cannot post a question without being shut down and dragged through the mud. I will not deny that there are cases when on SC we (myself included) could’ve acted nicer too. But the later comments paint the eerily familiar picture of the active contributors burned out from repeatedly answering the same homework questions.

StackOverflow code of conduct establishes a clear social contract. If you’re here to ask then the answer to your question will depend on your own effort and someone’s kindness. If you’re here to help then be patient. As much as I love to criticize anything and everything, I’d have hard time disagreeing with this.

SCN used to be a place by professionals and for professionals. But over the years, that social contract, as we say in the US South, “got gone”.

The inclusion that is not supported by platform features and human actions is just a bunch of baloney. And encouraging the drive-by, “dear gurus, here is my client requirement” questions for the sake of generating the content mass is not the inclusion. It is an enablement mechanism for the shady consulting companies.

Those who expect to be treated like professionals need to behave as such.

Without a clear definition of (and adherence to) the social contract and a functional platform SAP Community will continue to decline. SAP community, of course, won’t cease to exist. But where will it go? That is the question we need to start asking ourselves. The ball has been in the SAP’s court for so long on this that the game might as well be considered forfeited.