UPDATE: From SAP Cloud Integration version 2.49.x, you need to provide allowed headers in the request and response headers and implicit conversion will not be done by the OData V2 outbound adapter. For more information, check out the blog https://blogs.sap.com/2019/01/16/sap-cloud-platform-integration-headers-whitelisting-in-odata-v2-outbound-connector/

UPDATE: From SAP Cloud Integration version 2.46.x, all the response headers from the OData V2 service back end system will be converted to message/exchange headers by OData V2 receiver adapter/connector.

SAP Cloud Integration version 2.43.x comes with some enhancements in OData V2 receiver adapter along with some behavioural changes.

This blog explains about the new enhancements, change in behavior and how to handle the behavioural changes.

This change in behaviour can be observed from OData V2 component version 1.7.

Where to see the component version?

In SAP Cloud Integration, you can get the version of a specific component by pressing “i” (information icon) button. Sample screenshot below 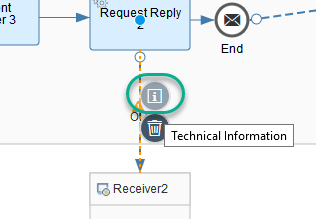 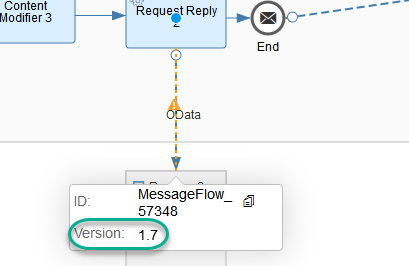 To address such use cases, headers propagation has been enabled. So, if you have a header, e.g. if-none-match, and if you wish this header to be passed as HTTP request header, then you can achieve this from OData V2 1.7 version onwards. You just need to create this header as message header in content modifier or script step, before the OData V2 adapter step, and this message header will be converted to HTTP request header and then it will be propagated to OData V2 backend.

The enhancement of Headers Propagation, brings some behavioral changes as well. Meaning, till OData V2 version 1.7, you might have declared some message headers which were being used for some specific purpose in your Integration Flow Projects. When you now plan to enhance your existing with OData V2 adapter (1.7 or greater), those headers will also be converted to HTTP request headers and it may introduce unexpected behavior (e.g., invoking of OData V2 endpoint may fail because the service may not support some custom HTTP request headers).

To adopt to behavioral change, you need to do some header clean-up activities. If you are aware of how to remove the unwanted headers via content modifier or script steps, then you can go ahead and add these steps and adopt your integration flow.

Below are some examples on how to adopt header removal with content modifier and script step.

Script Step: You can also use groovy step to achieve the same. Script step is recommended because you can re-use the groovy script across different places in Integration Flow project. Below are some sample script functions which may be helpful for you. If you are an expert in script, you can go ahead and make use of your own script functions.

Hi Thanks for sharing this information.

Using SF Adapters, can you advise how to add in the request headers information like the message process id of the artifact execution in CPI ? I see it in some standard integration, these request headers are added and serves as good identifier when reviewing Odata API Audit log to cross reference which execution the logs generated are for.

As described in the documentation https://help.sap.com/viewer/368c481cd6954bdfa5d0435479fd4eaf/Cloud/en-US/b27829c720db4773a147b8bb2b61c2ba.html , the SAP Cloud Integration SuccessFactors outbound/receiver adapter/connector adds the required headers. It is done by the connector itself.

I request you to visit this documentation section.

Hope this info helps you.