In this post, I look back on an idea surfaced by a hero of mine, and think about how that idea laid the path for today’s containerisation initiatives.

One of the periodicals I eagerly anticipated and regularly devoured every month, starting in the 1980’s, was Byte magazine. From the fanciful and inventive artwork on the covers (many pieces by Robert Tinney), through the regular columns to the special subjects that were covered from time to time, I enjoyed the pioneering spirit and wonderful ideas that poured out of the pages. 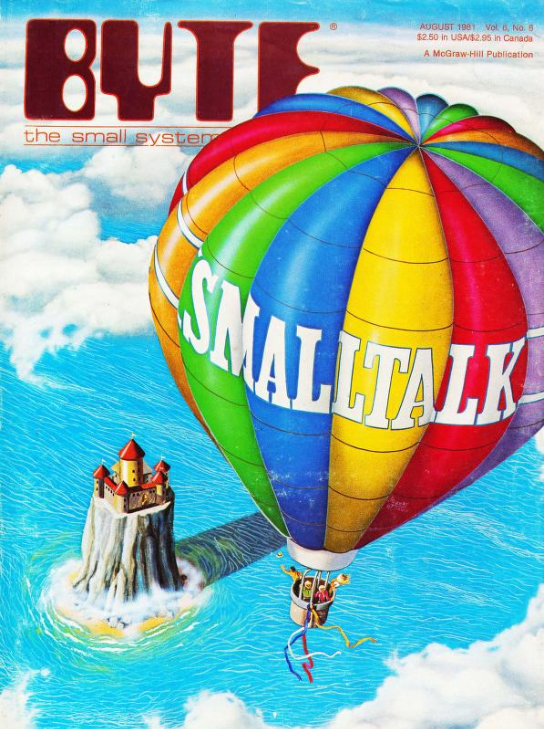 One of my all time tech heroes Jon Udell wrote regularly for Byte, and I had the honour of meeting him at O’Reilly’s Open Source Convention (OSCON) back in the early 2000’s.

The idea in one of the articles Jon wrote (and there were many – see his list of 1999-2002 BYTE.com columns for example) has stayed with me since I read it. You have to remember that it was at a time when the web was young, and there was a clear distinction between client and server. On our workstations we ran clients – web browsers such as Netscape Navigator, and even earlier examples such as Mosaic and Cello.

It was a given that web servers (very often in the form of httpd – Apache’s web server software) ran on, well, servers, and that was that. Our traditional mindset was very much oriented around the concepts of client and server, not least since SAP released R/3 in 1992, a firmly client-server architecture in contrast to what we’d been used to before that with R/2.

So when Jon wrote about the idea of a service running directly on one’s local workstation, based around a local web server, it was something pretty new. The concept of pointing our local web browsers at a web server running on the same host – that was a light bulb moment for sure. Typing “localhost” into the URL address bar invoked a small degree of excitement, as if we were doing something ever so slightly futuristic. Sure, we’d used the file scheme (file:///) to load local static resources before, but to be able to interact with a service, especially a Common Gateway Interface (CGI)* based service that we could control and alter, that was something almost magical.

*I’m reminded of the venerable Internet Transaction Server (ITS) which has been the subject of fond reminiscences recently on Twitter. The ITS was essentially two components, the “agate” and the “wgate”. The “wgate” (web gateway) came in various flavours, according to the web server APIs of the day. One was the generic CGI flavour, which was my favourite as I’d been building web based interfaces to SAP systems for quite a while before the ITS, using CGI and the RFCSDK. But I digress.

What that concept of a local web server did was democratise HTTP. Of course, the web itself was already pretty democratic – anyone with a plain text editor could create content with HTML, and learn how to create that content by looking at the source of existing content. But the ability, and more so the idea that anyone could run web servers locally, to serve up small services, single-purpose user interfaces, was rather enlightening.

The idea of running a web server locally broke down the traditionally strict separation of client and server, broke down the conceptual barriers between what you ran on your workstation and what ran on servers that you couldn’t see. Suddenly we were considering services that ran locally. Services that we spoke to over HTTP, that nearly always had a web-based interface, could now run locally. Once you’d seen the word “localhost” in that URL bar, you couldn’t unsee it.

And so began, at least for me, the idea that there was really little distinction between client and server. Services that you or others built could run locally or remotely. What mattered was that you talked to them, in some cases administered them, via your web browser. The only difference was that the hostname in the URL was different.

What’s more, running services locally like this became easier as more and more software producers and hobbyists offered bundles that were easy to install – whether because the target OS made it easy, or that the bundle itself was portable. Love or loathe the Java language itself, it’s hard to deny the early portability of code provided by the real triumph of Java – the Java Virtual Machine (JVM). Download a Java archive, run it, and connect to the service you’ve just instantiated by specifying “localhost” and some port number* in your browser.

*the port number was usually above 1024, as getting a service to listen on port numbers lower than that requires root privileges.

From portable services to containers

I was reminded this weekend of the concept of the near ubiquity of portable services fronted by web-based interfaces in a video I was watching on Kafka and PCF Dev. PCF Dev is a local Cloud Foundry installation for development purposes – I’ll leave the musing on how this idea adds to the concepts of this post’s subject as an exercise for the reader.

The Kafka service had a web interface that displayed stats on schemas, topics, connections and more. The fact that I couldn’t work out whether the address in the URL bar (which you can see in the video) was something directly local or in a container (it was at least a private address) drove home the idea that discrete services and containers were in this context one and the same thing.

Today we take for granted the concept of containers, whether those containers are explicit and managed by a local (or remote) Docker system, or whether they’re ephemeral and practically conceptual in the context of the Cloud Foundry environment on the SAP Cloud Platform. But I think that the journey we’re taking towards the realisation of an enterprise compute fabric has been influenced by fundamental ideas that appeared decades ago.

Moreover, the very existence of tools like PCF Dev underlines the idea that there really is no distinction between client and server. Or rather, that workstations and cloud resources alike can be platforms to run these discrete, modular services. And as we expand the idea of what compute means, bringing in concepts such as serverless, that reduce to a minimum the idea of a unit of computation, we realise that perhaps the journey that started back in the days of Byte is far from over.

I for one am genuinely intrigued and excited by the prospect and reality of cloud native computing, and what we are doing in the SAP world in that area – take a look at Bjoern Goerke‘s post “SAP Cloud Platform: An open enterprise platform with a cloud-native core” for examples of what open source and partnership initiatives are taking place in this area right now. I have a feeling that there’s a pioneering spirit still very fresh in this age, and am looking forward to seeing where it takes us.

This post was brought to you by Pact Coffee’s Ubumwe Kigoma and the odd feeling of not going out on a Monday dawn due to an enforced rest from running to give my tired legs a chance to recover.

Nice one DJ! Hope your legs are recovering 🙂

Thanks Simon. I've been avoiding resting but everything has caught up with me. Determined to take a week off. Hard going, though!

DJ Adams Great to see we share same heroes. It was always a treat to read John Udell in Byte in my engineering college's library.

Localhost has gotten another popular use these days in microservices world in the realm of Service Mesh. Linkerd or Envoy like proxies are loaded as sidecars along with a microservice. When these services have to talk with each other they just talk with localhost and the sidecars proxy the traffic with other services. Pretty cool concepts and opens up a lot of avenues for traffic shaping, load balancing, service resiliency etc.

Thanks for the comment! Yes, I suspect many of us are former Byte readers. Happy memories from that era. Jon's writing always made me think, and his take on using various technologies for real world problems has often inspired me (not least in his Practical Groupware book).

I don't know much at all about service mesh, but what you describe makes sense. I'll have to add it to my learning-continuum reading list!