A Sunday arvo brew story from Down Under

7 4 312
I’m writing this as my first “all grain” beer is “mashing in”. Just a warning up front, this post has nothing to do with SAP or it’s products, there is a very tenuous link to SAP Inside Track Sydney #sitSYD but more on that later… are you still reading? Excellent lets continue.
Do you like beer? Have you ever want to brew your own? Or are you maybe just interested to understand how to do it?
For my 30th birthday my wife bought me a home-brew starter kit, I used it once to create a not too bad beer, but then it got put in the garage and I continued to buy beer from the shop instead, fast forward a decade or so and that urge to brew has blossomed again, it was always lurking in the back of my mind, but this time I wanted to do it from scratch, last time had felt like cheating using a beginners kit that only required me to add water and yeast, it was time to get back to basics (no before you ask I didn’t grow the grain or the hops). 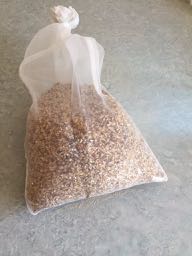 Also this time I decided because I’m a bit lazy that I wasn’t going to bottle my beer, that just takes to long and requires cleaning and rinsing all the bottles, this time I was going to keg it.
As I am want to do, I researched this project to within a inch of it’s life, finally deciding to purchase a Small Batch brew and kegging kit. It seemed like a good way to get started and wasn’t too expensive. Basically this is a so called “Brew in a Bag” or (BIAB) system. Side note: Brewers seem to love their acronyms and special terms almost as much as we do in technology. So here’s what a my first brew day was like:

As Steve Balmer might say “Sanitise, Sanitise, Sanitise” – its super important to make sure all your equipment is clean and sanitised especially for any equipment that comes into contact with the beer after the boil step (boiling will kill off any nasties). Liquid “no-rinse” sanitiser seems to be the go here, easy to use and no need to rinse. One tip I got of YouTube was to fill a spray bottle with sanitiser too that you can use during the process. 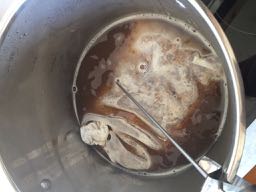 “Mashing” seems to me is really just steeping the grains in hot water and with BIAB this is kind of like making a bit cup of tea with a giant grain filled teabag. The main purpose of this step is to extract the sugars from the grains that will ultimately be turned into alcohol during fermentation. During this step you basically have two pots going on the stove, one with the giant grain bag in it steeping and the other heating up water for the steps that are required during this stage and the next. The “mashing in” took about 75 minutes, steeping the grains in 65C (150F) water. Trying to keep the pot at a constant temperature is a bit tricky (maybe insulating the pot is something I’ll try next time) but during the 75 minutes I had to keep adding a bit of heat to keep the temperature close to the target. My understanding is it’s important not to get too hot as that can extract bitter tannins from the grains. After the 75 minutes I added 2 litres (1/2 gallon) of water to the grain pot to bring the temperate up to 76C (170F) for 10 more minutes. 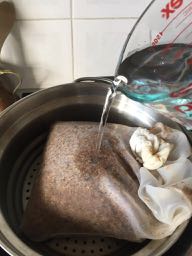 Another cool brewing term “Sparging” – my translation; rinsing the grains. In this step I heat another 3.5 (1 gallon) litres of water to 76C, then take the grain bag out and put it into a colander suspended over the brew pot. Now using the 3.5 litres of hot water I rinse the rest of the sugar from the grains. By the way the liquid you have now in the brew pot is technically called “wort” (what a lovely word, just one letter away from a nasty skin infection – yuck). 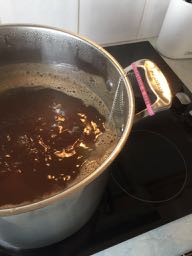 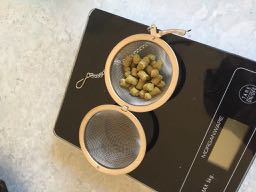 Finally a term I understood! Basically now you boil the wort for 1 hour. – my poor little stove struggled a bit to keep the 7.5 litres of wort at a good rolling boil so I had to have it partially covered for the boil (note to self, buy a better stove next time!). During the hour long boil you add some hops, or as we brewers like to say this is when we do our “Hop additions”. For this brew “The Citra Warrior IPA” there are two hop additions, 8g of Warrior hops at 10 minutes into the boil and 5g of Citra hops at 55 minutes into the one hour boil. To add your hops you use oversized tea infusers. The purpose of the hops is to add bitterness and aroma to the beer, hops are the flower of the hop plant and you can use them fresh or more likely you will get them in pellet form – they smell awesome, unlike the wort which actually smells pretty gruesome to be honest.
So here’s something SAP related for you. At the recent UI5Con, the UI5 team brewed a special beer for the event called “YippiAPIPA”, and talk about hop additions! That beer had more hop additions then I’ve had hot dinners. Thanks to Andreas Kunz  for sharing the recipe on GitHub  but I might need to re-mortgage the house to afford those hops (hops tend to be expensive). That said this has inspired me to brew a batch for the next SAP Tech Night in Sydney #sitSYD, I just need to come up with a name as awesome as YippeIPA – genius! All suggestions welcome.

Now it is time to focus on the alcohol bit, it’s time to start up your yeast to get them ready to eat all those sugars you released from grains. It’s also time to take an OG or “Original Gravity” reading. This reading is important as it is a measure of how much sugar is in your Wort, since the sugar is what the yeast will eat and turn into alcohol it is important to get this reading so that you can compare it to the amount of residual sugar after fermentation and calculate the alcohol percentage of your beer. My OG reading was 1.046. 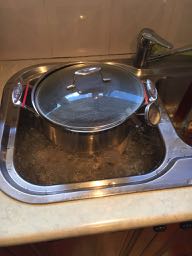 Now it’s time to chill, literally. It’s time to chill the wort down to 24C (75F) so that you can transfer it to the carboy a.k.a demijohn (big glass bottle to you and me) and add your yeast, or as we brewers say “pitch the yeast”. Placing the brew pot into the kitchen sink and filling around it with cold water and ice cubes brings the temperature down pretty quickly. 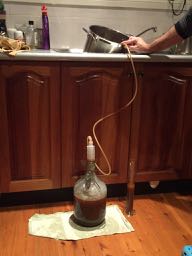 This is the final step before fermentation. Basically I used a syphon to transfer the cooled wort into the carboy (remember that big glass bottle). Using the power of gravity here was fun, ah a reminder of my days studying physics! Leave some space in the carboy for fermentation then stick in the sanitised bung and airlock to seal the deal.

If you made it this far well done – you will need to wait a couple of weeks while the yeast do their job while keeping them in a nice goldilocks zone between 18C (65F) – 24C (75F) a challenge in our freezing cold house.
I hope you enjoyed reading about my first all grain brew day. Perhaps this has inspired you to try it yourself or maybe you’re thinking it’s easier to head to the bottle shop and that you’d rather spend 4 hours on a Sunday afternoon doing something else, I don’t blame you!
If you are interested in the kegging process and how the beer turns out keep an eye out for a follow up blog.
Prost, Slainte, Cheers!
Simon
P.S. if you are a SAP Community member and a brewer or beer enthusiast it would be great to hear from you please add a comment below.
Alerting is not available for unauthorized users

I'm looking forward to seeing this tagged on untappd ? you need to add sensors and iot to monitor the temperatures and you are back in sap land.

That is actually part of the plan, I'm just having some issues programming my TI Sensor tag to connect to SCP at a regular interval and either turn on or off my heating element based on the temperature...stay tuned!

Hey Simon, welcome to the brewing community :). If you want to automate you process I highly recoomend using the CraftBeerPi application. Maybee you want to take a look at my blog series.

Thanks Frederick, sounds cool, I will!

My husband is a home brewer, so I enjoyed reading your blog because I actually recognized a lot of those terms you were translating for the non-brewers.

Confession: Not only do I not brew, I don't even drink beer. I think I am the only person of German descent (I'm half German) who does not drink beer. <blush>

What saves me from complete shame is 1) I do like wine, as well as Kaffee und Kuchen (coffee and cake) and 2) I LOVE the malt aroma when my husband has a boil going in his brew kitchen (aka workshop).

Hi Audrey, my wife also commented on the malt aroma, it reminded her of Ovomaltine - she also doesn't like beer so I understand! 🙂 Thanks for taking the time to read and comment on the blog.