Showcase of Gardener at OSCON

I’m fresh off a coast to coast trip and I wanted to share my thoughts on how the cloud treated me this past week at the OSCON conference for Open Source put on by O’Reilly Media.  I’m composing this while flying out of Portland, OR and I can’t believe how the clouds aligned next to Mount Hood and Mount Adams as a beacon to return next year. 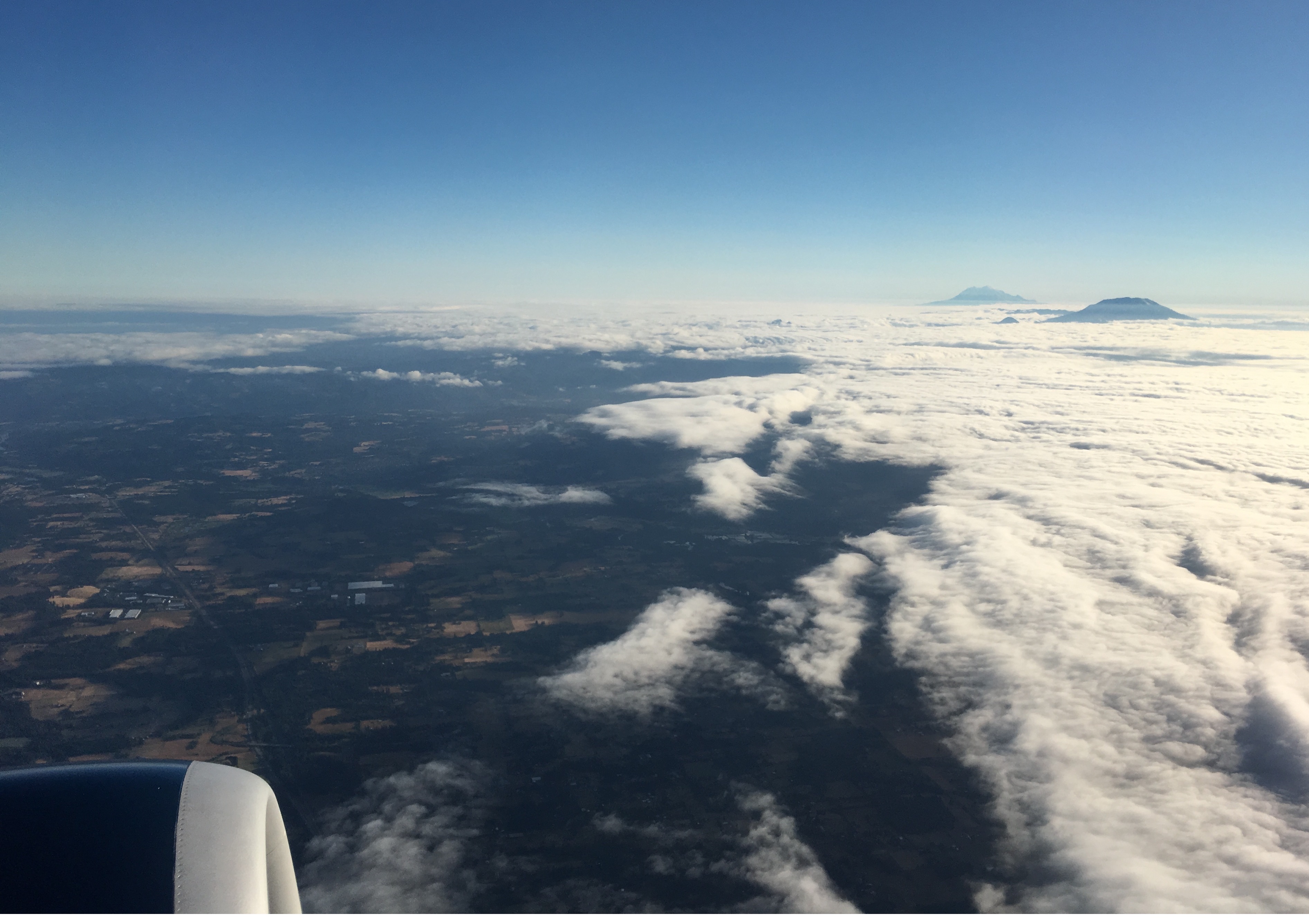 As some of you know I am a person who loves to learn about cloud technologies and in my role on the developer relations team I get to focus on what interest me.  To that end I was asked to help out at our open source booth highlighting a few of SAP’s technologies in the open source space.

There were three things being highlighted in our SAP booth and a few featured speakers from SAP in the breakout sessions.  In addition we informed attendees about our developer tools at developers.sap.com

Open source projects from SAP in the booth:

I was focused on Gardener.  This is something that is relatively new for SAP and is a pretty advanced in my opinion for what it does in an emerging space.  I was also focused on the snacks that were at OSCON from doughnuts to ice cream to churros to beer…

(a few pics of the snack carts) 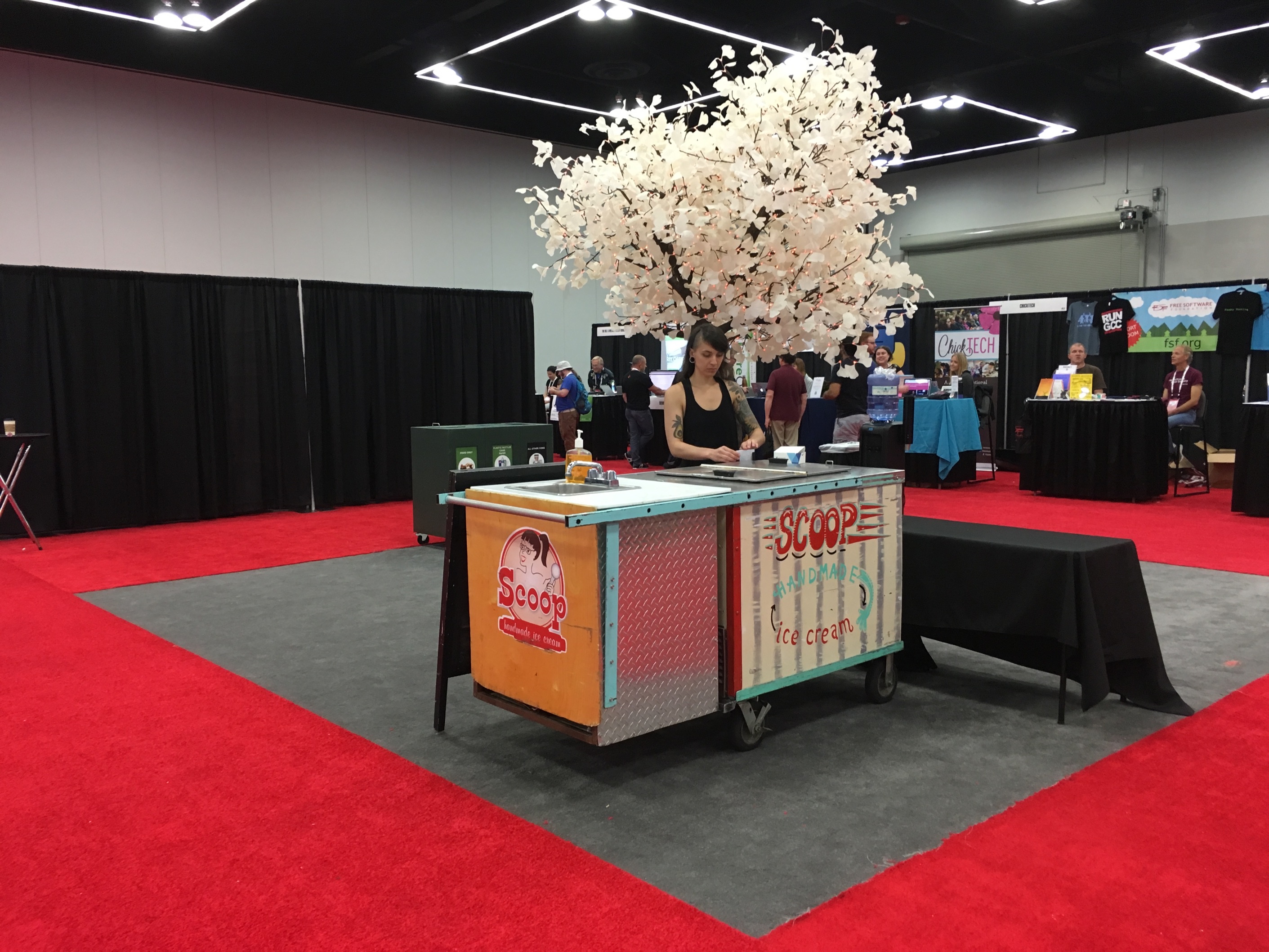 But let’s back up a second before I tell you more about Gardener and tell you about my observations as a whole from the SAP booth.  We had lots of info to share and some cool SWAG to handout, but there were what I would like to call three types of attendees who passed by our location on the exhibition hall floor that I got to know.  First, a casual attendee who wanted to learn a little about a lot of what the show had to offer.  Second, there were attendees who wanted to go deep on a subject and were targeting this show as a strong resource for their current or next role.  Finally, I met a lot of folks who were working in the industry supporting customers and seeking out information and relationships that could help their business gain an edge in this open source space.  Of those attendees me and my colleagues had a few common questions to kick off our conversations with the several hundred individuals we met.

So my most common answers started with explaining how SAP is a business software company with a large set of applications and processes from SaaS solutions for travel & expense to a traditional ERP system with a heavy focus on building in the cloud as well as extending and integrating in the cloud as well.  I would lead into our three presentations and lean heavily on my colleague Meredith Hassett to walk them through UI5, CLA, and Gardener but then I would go deeper on Gardener when interest was shown. 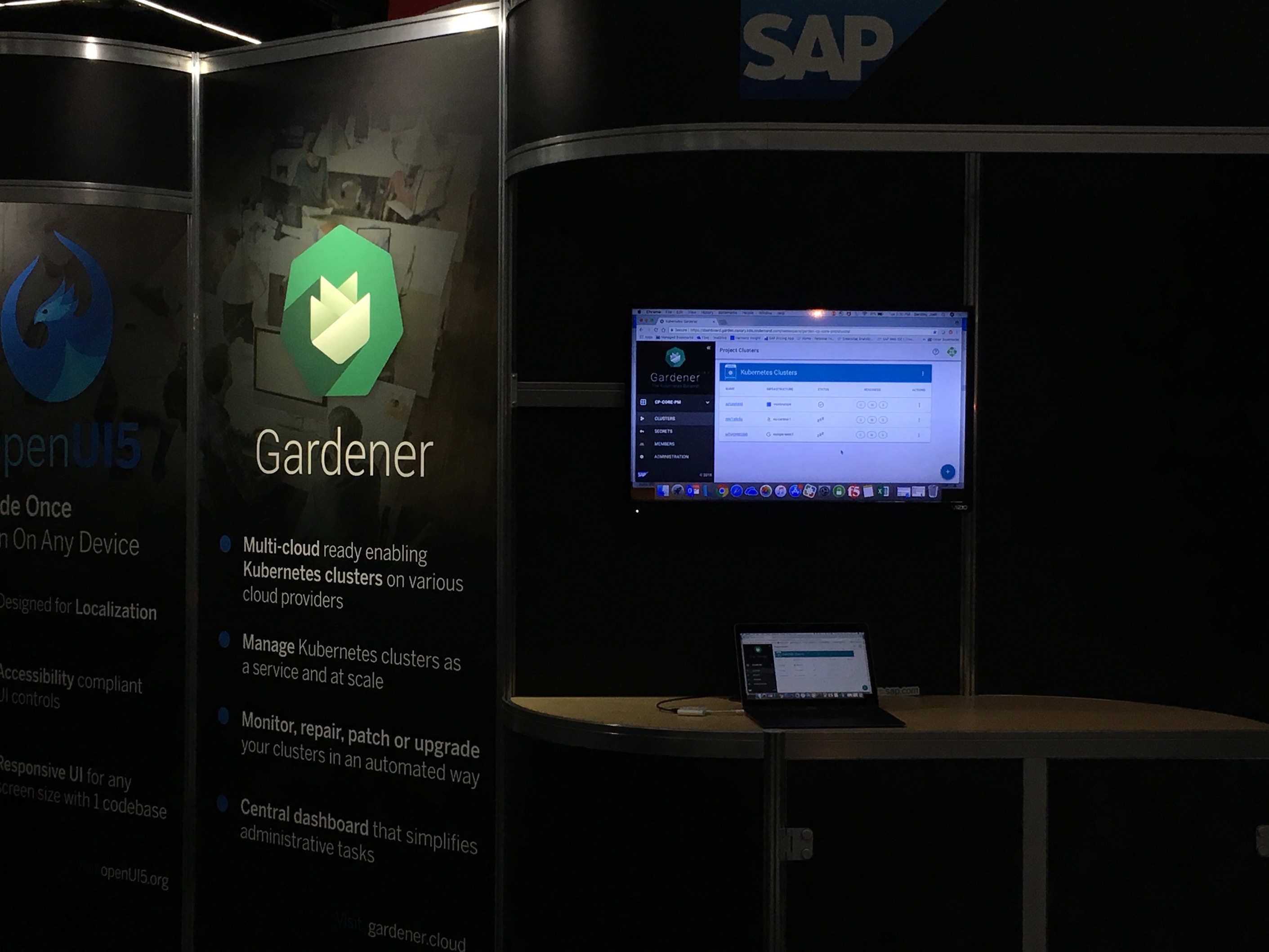 So now let’s go deeper on Gardener for a few minutes.  I’m someone who loves how SAP has built applications in the cloud via our SAP Cloud Platform in our own data centers and coupled that approach with a set of services now offered on Cloud Foundry standards.  What I had been saying for a while since playing with docker containers over 4 years ago in a previous role was that I wanted to see more container and kubernetes action at SAP.  Enter Gardener, what we are calling the kubernetes botanist.  I must say, I love this nomenclature.  It really does align with the idea of pods and growing clusters, but goes further since it allows for a single console and day 2 operations of your kubernetes clusters.  For more info on our entire Cloud Foundry and Cloud Native presence see this BLOG post from our CTO Bjoern Goerke.

My conversations and short demos at OSCON revolved around showing how we can build a cluster with kubernetes, but not a regular cluster, an enterprise grade cluster, and place it on an IaaS of choice from a single management console.  Now I know a K8’s user may want the task of building up their own orchestration network, or maybe they are only using AWS and will grab their EKS as part of the container applications they want to build (or GKE for google/AKS for Azure).  Gardener provides a super easy baseline after simply choosing AWS, Azure, GCP or Open Stack for your install infrastructure and providing some shared secrets for getting clusters built on that space.   I got back several positive comments around how this really could be a manager of kubernetes, which in turn is managing their clusters.

I don’t want to write an entire tutorial here on setting up and using kubernetes or Gardener in this BLOG, but I will highlight what happens after you download the code from https://github.com/gardener There are two ways to manage a Gardener cluster, command line or dashboard.  The command line is called gardenctl and is written in GO.  The dashboard is a really nice web interface to visualize what is running where in your projects.  Once you authenticate to your garden you can do the following: 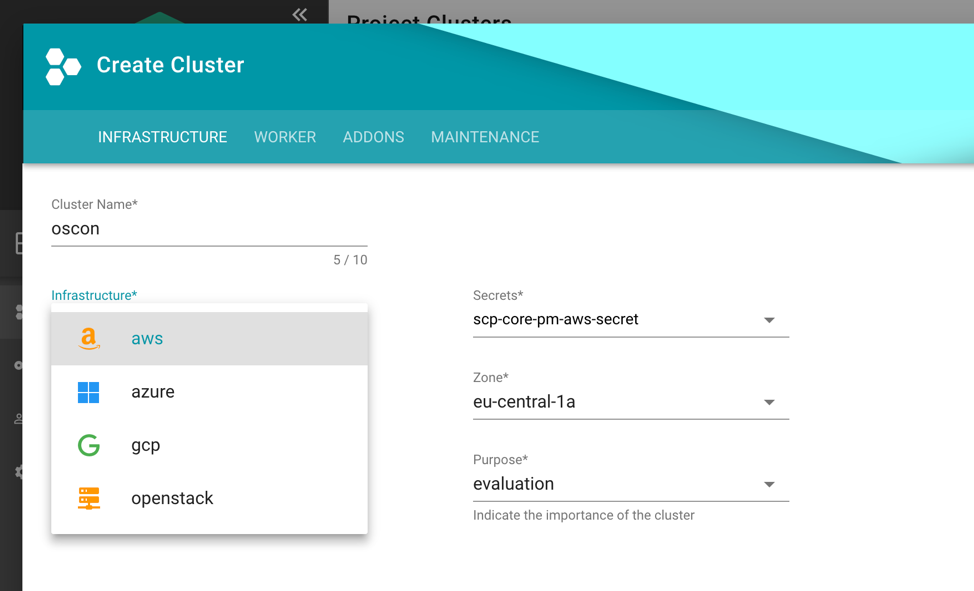 (Setting up multiple clusters in a project for OSCON)

What did I walk attendees through?

For the purposes of my demo I showed the above screens a lot and walked attendees through the SAP Cloud Platform area as a Garden, the Seed Cluster project area, and then explained the Shoots that grow for an app workload.  We had some great dialogue around how each of these sections had specific functions but were themselves a cluster with it’s own workers.  The beauty of this arrangement is not just utilizing the core functions of kubernetes in each section, but also keeping secure access for the Gardener admin away form the IaaS user space in the seed and the end user access at the shoot level.  When you couple this architecture with the ability for a dev-ops team to have an operations contact control all the K8’s in the organization from a single console you begin to see the power of Gardener.

It wasn’t as much of an “AHA” moment as it was a realization via a quick mental check that the existing IaaS providers were not offering a single console to solve this problem.  The next mental gymnastics produced a follow up that was usually something about how would we sell this.  When I showed how they can go to https://github.gardener and start playing around with Gardener most attendees were not only surprised, they were impressed.

This is a new SAP for a lot of people internally and externally.  We continue at our core to care about solving business problems via technology, but through the integration with open source and cloud standards we are achieving this in an exciting way that I have never experienced before.  I’m gonna go now and work on my analogies for energy, photosynthesis, sunlight, and other components needed to grow some clusters.  Happy gardening.

It's funny how it can either be "What is SAP?" or "Does anyone NOT know what S-A-P is?" Thanks for sharing!

What I have a hard time wrapping around my mind is exactly the pitch when you “sell this”. Because this is not about functionality or business use, this is about technology, bare bones technology.

People who work with SAP are usually application/business driven, so it seems like a fish out of the water to be talking about something that is more on Red Hat’s territory of container technology that ultimately will serve a business purpose.

As a developer I love to able to capitalise on these technologies, but do I really care if the customer is running SCP or Pivotal? Or to phrase it as a question, why should I care?

Thanks so much for the comment Joao.  Having spent three years at Red Hat and being the proud owner of a Fedora, I will say I see your point of view.  The culture and tools in the open source community can seem to be a bit at odds with SAP and other enterprise app companies.  I don’t agree that this has to continue.  We are entering a phase of change within a space that is being disrupted not only by apps, but now by app service and infrastructure choices completely fragmented if one chooses.  So as to why I would care as a developer, I would want to have a community that offers a deep and wide perspective while also staying in their lane when it comes to core purposes.  A pivotal or SCP or IBM or any other flavor of container provider should be evaluated for what it does and doesn’t do, not only against the competition, but also against the status quo of doing nothing.  Analysis paralysis is the one thing I see holding back companies from moving forward in this brave new world above all other factors.