Live Universe Connectivity gets a boost!

Live Universe connectivity, to the SAP BI Platform, is about to get a significant update but watch out! If you don’t take action before wave 14 hits you, you won’t be able to edit or create new Live Universe models.

These changes are planned to be available in Wave 14, but importantly if you already connect to a Universe with a Live connection, you may need to take action BEFORE wave 14.

This blog introduces what’s new and what you need to do before wave 14.

As mentioned in the introduction there’s two main new features, but there’s a few more too!

When creating a new Model, off a Live Universe Connection, a query panel is now presented. It means you can

It means you don’t need a derived universe anymore. It also means you can query multiple fact tables as contexts are now supported, including context prompting. All that’s required is a single result set.

When a user uses the model, the query that defines that model is run by Web Intelligence on the BI Platform. The query result is ‘cached’ in a Web Intelligence document that is held in the users BI Platform favorites folder. This cache is used every time SAP Analytics Cloud wants to display a visualisation. Before, SAP Analytics Cloud would send the query to the underlying database every time.

Consequently the users experience should be dramatically improved since Web Intelligence will be serving up the data, rather than asking the database every time. The only cost is the user may have to wait longer for initial query to be run.

Restricted measures enables you to create a measure on the condition of a dimension. In this example I’ve created a ‘Web Intelligence Events’ measure which only shows the ‘Events’ when the ‘Object Type’ is ‘Web Intelligence’. 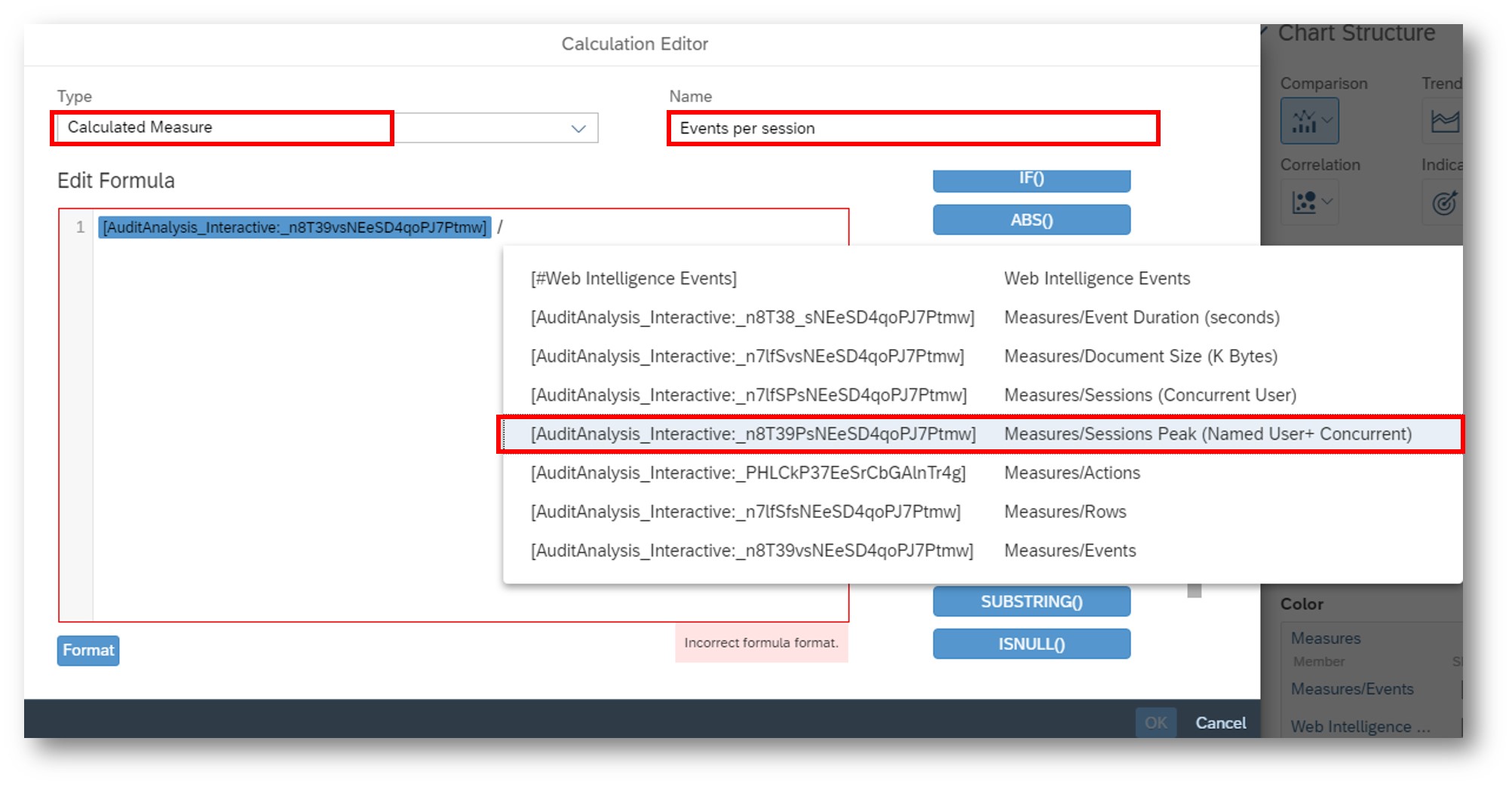 Calculated measures enables you to build new formula on existing measures or other calculated or restricted measures.

The logic for this is pushed down from SAP Analytics Cloud to Web Intelligence. This feature required SAP BI Platform 4.2 Support Pack 4 Patch 3. 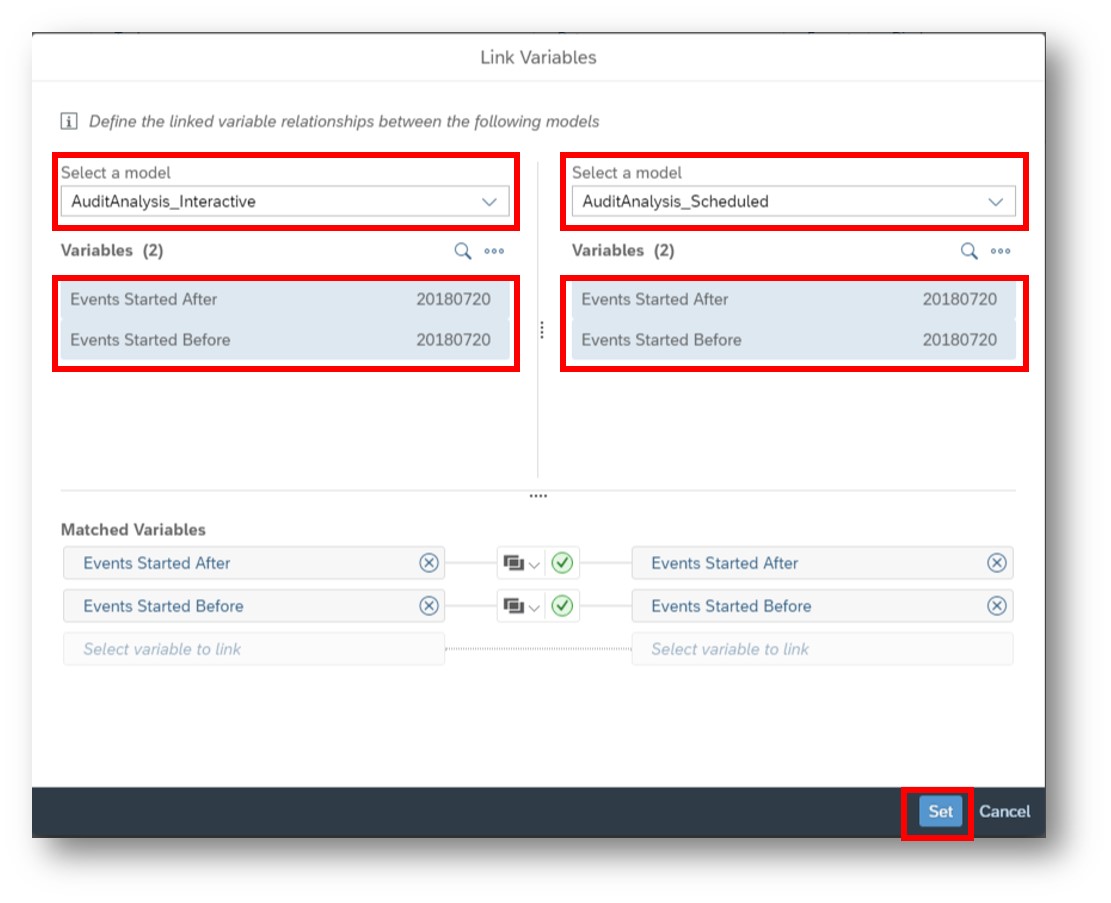 With two models containing the same universe prompts it’s nice for the end user to only need to answer the same prompt once, rather than once for each model they have in their story.

Thanks to ‘Link Variables’ you can now link variables so only one set of universe prompts is provided.

Watch out! ‘Model Linking’ is not yet supported, though the User Interface allows you to link models. This is ‘work in progress’! 😉

Stat tuned for the official documentation to come, but I have updated my wiki with the new features in the ‘general‘ section.

It means you should update the on-premise ‘Live Connector’ before wave 14 if you want to create new or edit existing Live Universe models.

Perhaps confusingly, an SAP Analytics Cloud tenant earlier than wave 14 can use any version of Live Universe Connector. For example, if you updated to version 1.0.6, but you had an older tenant than wave 14, then it is supported, it will work. It’s just that it will work as the old version did. You’ll only get access to the new functionality described above when the tenant is updated to Wave 14.

This might be a little confusing, so I’ve create a matrix table of ‘Universe Live Connector Support Matrix‘

There is a known issue with version 1.0.6. The issue is related only to when

We’re still isolating the issue, but if you get a warning saying the ‘version is out of date’ then try version 1.0.5 until we identify the root cause.

[Update: 5 September 2018]: The next version of the cs_ina_agent.war, version 1.0.7 is now available on SMP which resolves this issue.

How do I ‘upgrade’ my Models?

When wave 14 hits your tenant all you need to do is edit the model to ‘upgrade’ it and benefit from all the new features. When you edit the model you’ll be presented with the Query Panel to define the model definition.

With all the excitement of wave 14 for Live Universes I thought it would be great for you to see what was coming by means of providing some step-by-step examples. I provide 2 detailed examples:

Feedback is much appreciated, as too are questions.

I'm trying to set up a customer with Live Universe connectivity today. I have successfully set up universe imports already for them.

I downloaded the latest version of cloud connector and agent yesterday, and have checked today that there aren't any new ones available.

However when I come to try to build a data model from it I get this error:

Great! V1.05 should resolve that problem.

Version 1.07 will fix this issue but I need to check when it will be available on SMP. I'll post back once I've found out

I should get an update middle of next week (29th August) to when 1.07 is planned to be available. I'll update this again then.

Thanks Matthew – rolling back to v105 did solve the issue.

One other thing that I have found today that you might like to know about if you didn’t already, is that if a SQL 2012 database has its collation set to Latin1_general_BIN (which is case sensitive) then the SQL connection falls over when you try to bring tables into a query on the gui or import any data.

free hand sql allows you to preview data, but not import it.

I get this error

looking at the database’s information_schema, it is displayed as INFORMATION_SCHEMA.

In the same SQL instance, if I create a new database with a collation definition that is not case sensitive I can add tables in teh gui and import data with no problems.

is there somewhere official I can send this as something to be looked at, or is it a known limitation already?

I can't see that listed in the system requirements, perhaps it should be. Could you please create a support incident for this, so my colleagues can investigate, Many thanks.

I've opened this support call, in case you want to monitor it 435693 / 2018 Connectivity to SQL database from SAC

The current plan is for version 1.0.7 to be available on SMP at the end of next week. i.e. Friday 7th September. This version should resolve this 'version not supported' error.

Version 1.07 is now available on Service Market Place to download. I advice all customers to use v1.07 over the earlier versions. Enjoy!

the engineers have released a version of SAP Agent that they say fixes the issue with the SQL connectivity our customer was having, 1.0.209. Will this be compatible with the v1.05 Live Connector they are running on?

Hello Keith, yes that should be fine. I'd recommend updating the LUC to 1.07 though, we fixed a few defects in 1.05. Regards, Matthew