The previous two scenarios gave us an idea about how the data is sent from the sensors to the IoT platform on SCP. This final scenario details how the data can be sent to actuators from the IoT platform. All IoT scenarios we developed in this blog series received data from the sensors and either took action automatically or sent a message to the user’s inbox.  But this scenario will receive data from the sensors (a sensor is a device, module, or subsystem whose purpose is to detect events or changes in its environment and send the information to other electronics, frequently a computer processor) and sends action to the actuators (an actuator is a component of a machine that is responsible for moving and controlling a mechanism or system, for example by opening a valve) in the manufacturing process.

Manufacturing process considered in the scenario:

The manufacturing process considered for this scenario is responsible for checking the thickness of the metal sheets produced by the machine. The thickness of the metal sheet is set to a value by the business and if the thickness varies from that value, the manufacturing process has to be stopped automatically. I agree this is too simple for a real scenario but implementing this scenario as a prototype would give us a clear understanding about how the data can be sent from the IoT platform to the device.

We can make small modifications to the prototype and accommodate it to a slightly complex scenario where the metallic sheets can be diverted to a different conveyer belt depending on the thickness of the sheet. According to the business rules set by the user, data can be sent to the appropriate actuators to divert the sheets to different conveyer belts depending on the value of thickness received from the sensor.

Steps to complete the scenario

Step 1- Device management: Set up message types, device types and device in Internet of things cockpit. => This step has been completed in the first part of the Blog series for all three scenarios.

The following 2 steps will be covered in this blog.

Step 3 – IoT application: Create Java application to integrate all these services and Python code to send the sensor data from the device.

Make sure that the following services are enabled in SAP Cloud Platform Neo environment under your trial account.

Let us configure the business rules for this scenario.

Create a project to hold the business rule service for the scenario.

Input: with one attribute – Thickness

Output: with one attribute – Action

ThicknessRule – This rule is constructed as a Decision Table. Depending on the thickness received by the rule different action command is sent as output.

ThicknessRuleSet – Add the Rule to the Rule set.

ThicknessRulesService – This rule service takes the data object ‘Input’ as input and returns ‘Output’ as result.

Make sure that this rule service is assigned to the rule set. Activate all the objects created in the steps above. Do not forget to deploy the rule service.

The rule service will be called from the IoT application to get the proper action for the thickness received from the sensors.

You can test the Business Rule Services by using Postman as shown in the part 2.1 of the blog series.

Steps to receive data from MMS of IoT to the device

Since we use HTTP for communicating between the device and IoT platform, the data cannot be pushed directly from IoT into the device. It is done in two steps:

a. Use Push Service to push the data from the IoT application to MMS. MMS stores these messages in the data store. These messages are pushed with a particular device ID.

b. Push messages must be retrieved actively by a device by supplying a GET request.

Step a, mentioned above is code in the IoT application (Java) and Step b is coded in the device (Python)

In order to simulate this scenario, I have set up my Raspberry Pi with a button – on click of which the thickness information is sent to SCP, an active buzzer and a LED to act as actuators. If the output of the business rules sends an action to the actuator, a LED lights up and buzzer sounds an alarm in my Raspberry Pi.

The thickness sensor sends the values to SCP using the code below. It also includes the code for pulling the data from MMS in case there is an action required based on the thickness value sent.

This is the ‘glue’ application which integrates Step 1 and Step 2. The application performs the following steps.

a. Read the thickness value sensor from the device [use the device ID that we got while registering the device in Step 1.

b. Send the thickness value to Business rules to get the action that needs to be taken, if any. If the value of the action is ‘Stop’, push the message to the MMS with the device ID and the message ID (the direction of this message must be set to ‘To Device’ in the Device management step – Step 1 otherwise the message will not be pushed to the MMS/device)

Code snippet for Step a.

The thickness data which comes from the Raspberry Pi is written into table T_THICK_IOTMESSAGES as per the service mappings which were done towards the end of Step 1.

Note: if you have not done the process service mappings, then use the default message table name created by the IoT device.

Code snippet for Step b.

The code lines below send the thickness read from Step a. to the Business Rule Engine to run it through the rules.

The glue code which calls all these functions is as below.

Do not forget to deploy the Java application in SCP.

I have uploaded the complete java application for Reorder scenario in the link below. 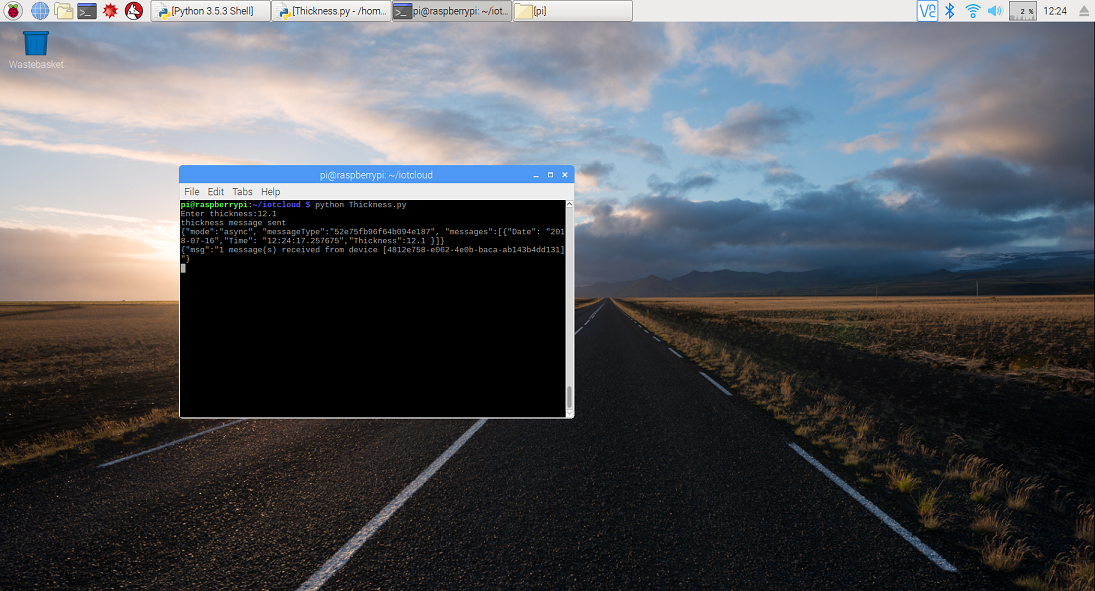 2. You can see the values getting stored in the table which is configured in the Service Mappings – T_THICK_IOTMESSAGES.

3. Run the Java servlet with the glue code. In an ideal prototype this part will be scheduled to run in the background. In this prototype, it reads the most recent value from the table and takes action accordingly.

You will see that the message has been pushed to the device. This is because the value of thickness received is 12.1 which is more than the set value of 12 (check business rules).

4. Raspberry Pi pulls this message from the MMS using a Get request and you can see the message being received. 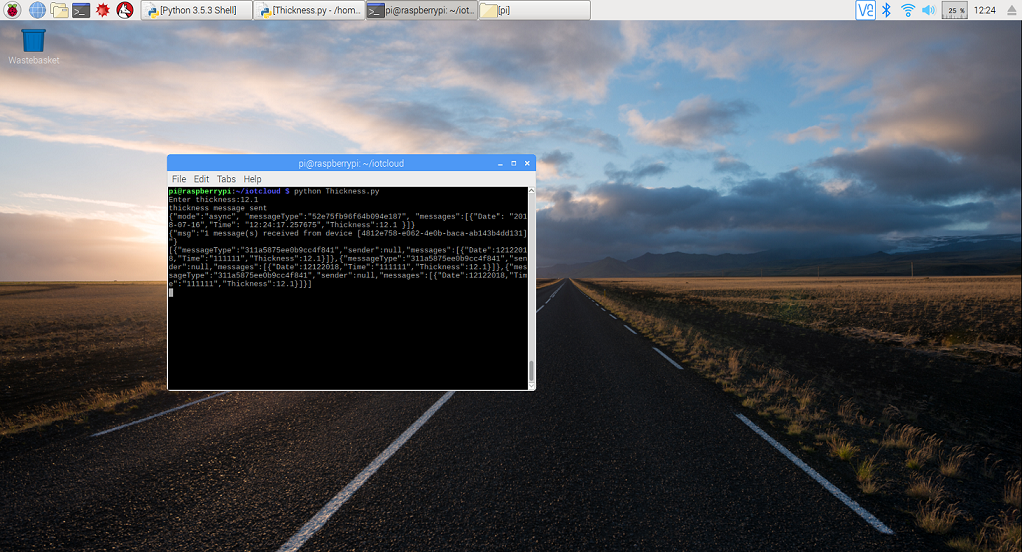 5. The LED and the buzzer are turned on. This completes the blog series. Feel free to get in touch with me if you have questions.

Nice blog. Definitely i will try this.

Currently i am struggling with  one issue hope you can look in to this.

So Requirement is to consume sensor data (DHT 11- reads temp/humidity data) in to HCP-IoT tables.

Steps i have performed so far--

Attaching code and MQTT broker point for your reference.

I am not stick with MQTT . if any other possible solution is there please suggest.

Are you getting any errors related to the connection when you execute the python program in raspberry pi?