SAP CAR provides two options for aggregation of POS transactions. Simpler solution would be to set up automatic aggregation for processing of tasks that are processed with the single-step procedure. More complex and as well efficient (when number of transactions) is to set up form of aggregates that first stores data in the database and then aggregates are processed by a subsequent step.

Alike simple and complex aggregations are performed by tasks.

Common configuration for both methods.

Both aggregation methods have few configuration settings that are used in common. At the beginning it’s worth to mention that for most of operations, activities you can implement parameters that could be later on used in BADIs to achieve greater flexibility of the solution.

Aggregation Period allows more detailed split of POS transactions based on for example period of time. Time unit is not mandatory here as separator, it could be freely defined implementation of BADI: /POSDW/BADI_GET_AGGR_GROUP

Next step is to create a task for generating data to follow-on system and include grouping. 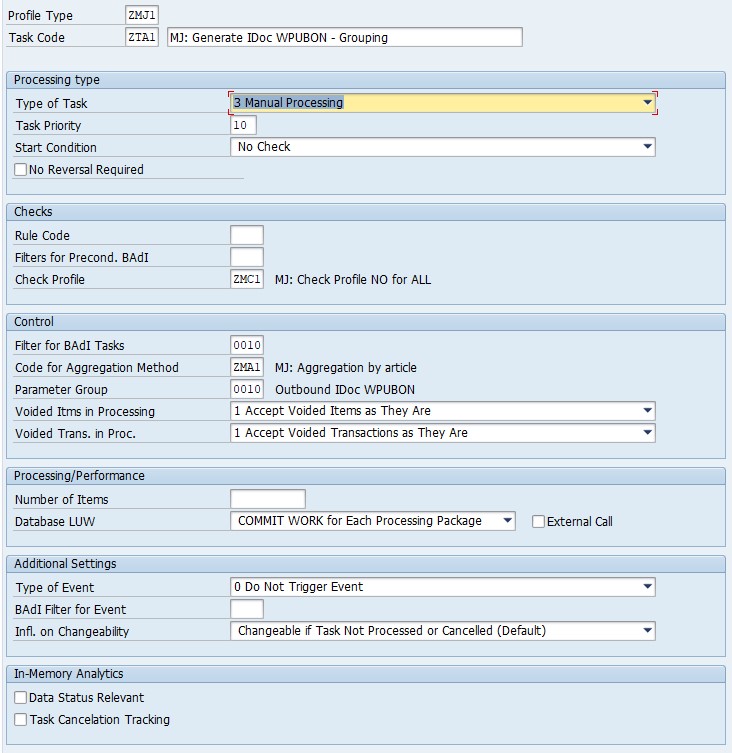 Start of task is manual as aggregation is executed for multiple POS transactions. Filter for BADI is 0010 – Create Idoc WPUBON. 0010 is simple an implementation of Badi (/POSDW/TASK) that process task. If you would like to aggregate data (one-step) field ‘code for aggregation method’ is where you place previously configured aggregation method.  As mentioned before to achieve greater flexibility parameter group might be assigned and used by Badi implementation.

Next part of customization is common for One-step and Two-Steps task processing. Each POS transaction could be assigned to task group.

First task group is defined and then tasks are assigned to it like presented below. 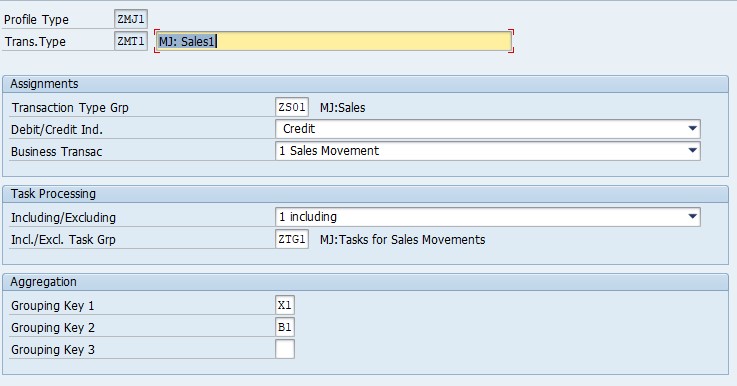 By this assignment we indicate that for transaction ZMT1 all tasks from task group ZTG1 are valid (if task processing is set to including). Additionally for the purpose of aggregation I can set three grouping keys and use them in Badi implementation.

For the testing purpose I will create (via inbound Idoc) four POS transactions. All will have same transaction type (ZMT1: MJ: Sales1), same shops (as follow-on Idoc is created per store in this Badi implementation) and two different materials. Additionally transactions are registered on two posting dates.

By executing task (where aggregation is applied or not) from transaction: /POSDW/PDIS new Idoc has been created to follow-on system that contains information about aggregated sales. 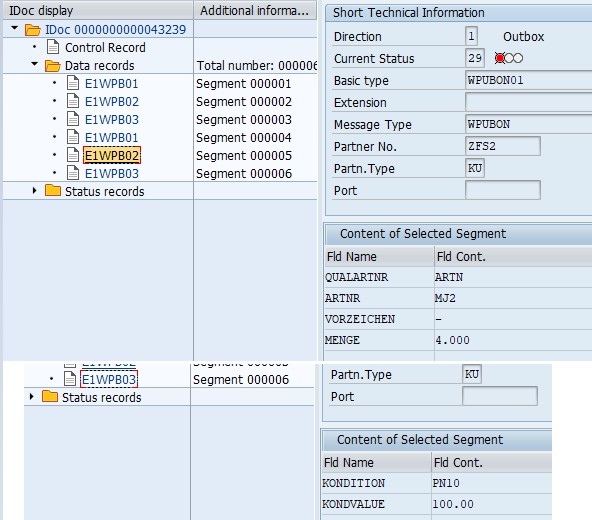 Two-steps aggregation splits process into two phases: aggregation and outbound processing. During first step, task creates aggregate package. The system forms a new aggregate package if no open one exists for the chosen aggregation method. If another aggregate exists with aggregated data records, which has not yet been completed, the system aggregates the data of the POS transactions to be processed in this aggregate. Aggregation package is an input data for second task which is called outbound task. During this task, data is converted to receiving system specific format and is sent to follow-on systems. 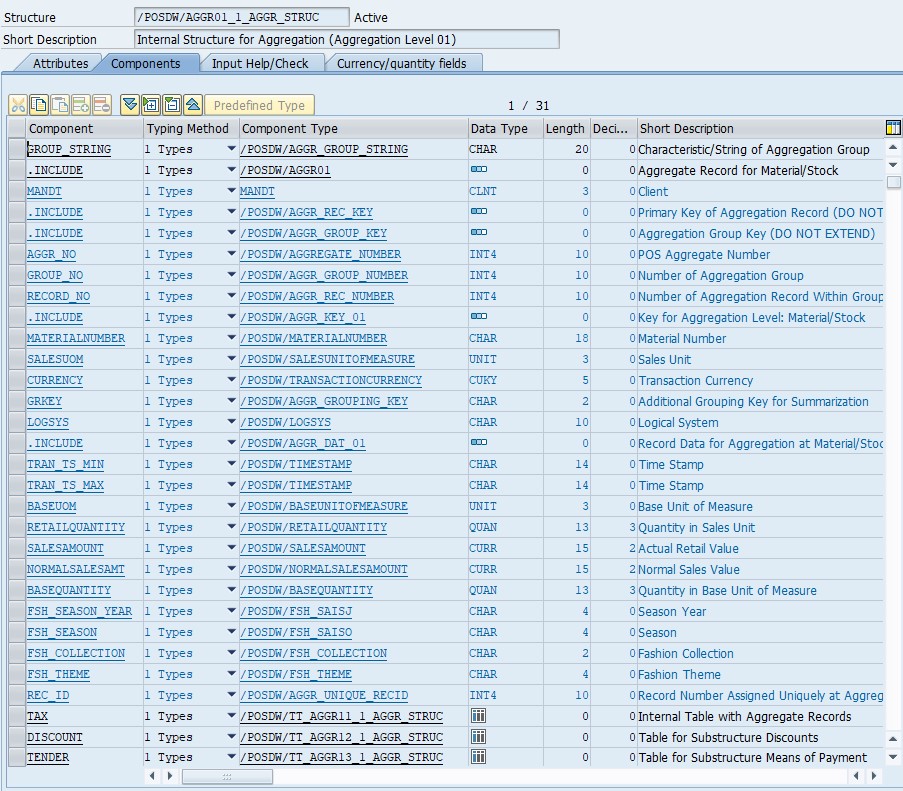 Last step of the configuration for aggregation levels is to decide how some non-key fields are going to be processed if record already exists, override, add, max or min.

Very useful is SAP Note: 980272 – Implementing tasks for two-step processing, which describes step by step how to create custom structures, tables and configure it.

Next step is to create aggregation task for two step processing. Generally idea is the same but only few different fields exist.

Type of task needs to be always 1 – Collective processing. Beside of that comparing to previous one-step configuration only aggregation level and aggregation period (this parameter is described in common part of the article) are needed.

This is the last configuration required to be configured. Tasks – Badi (Filter) specifies implementation of Badi to execute operation on previously aggregated data (usually it’s sending data to follow-on system). Because our aggregation task ZAG1 uses different structure then implementation of Badi that process the data (3001 uses /POSDW/TT_AGGR_SALES_W_DETAILS) mapping between structures is required. Table type describes target structure, source structure is in aggregation level and mapping is done by implementation if Badi specified in transfer filter field.

For the testing purpose I would like to use similar testing data as in previous example.

After running aggregation task with transaction /POSDW/PDIS new aggregation package has been created. 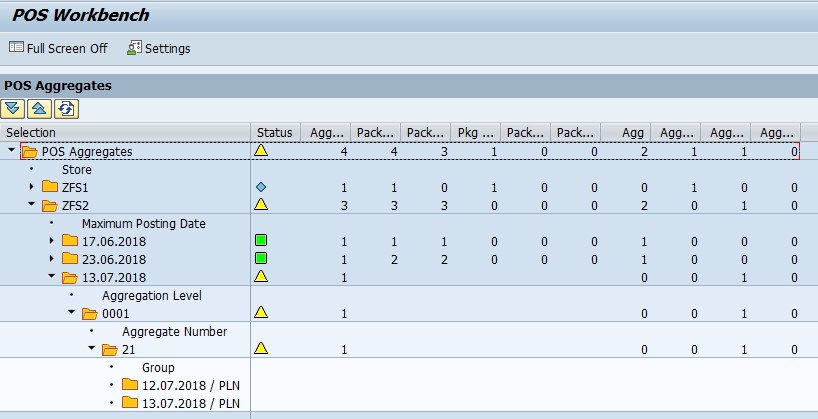 If you browse total table set at aggregation level you can find corresponding entry.

And more details about recorded and grouped transactions in /POSDW/AGGR01 as used by my task aggregation level is single hierarchy.

Last step for this processing is to run Outbound processing task for aggregations. This is done by transaction /POSDW/ODIS. For this particular Outbound task with badi implementation 3001 Idoc WPUUMS has been created and sent to follow-on system.

Btw, two Idocs were created because Outbound task use aggregation period 11 which is posting data and transactions were recorded with two different dates.

Thanks Maciej for a detailed process documentation.