At the recent ASUG/Sapphire event, I had the opportunity to sit in a usability session with SAP developers and comment on practical aspects of a work-in-progress.  While I can’t talk about the specifics of that software per the agreed terms, it could be instructive to compare generally the difference between code still in vitro and that in the wild.  For the latter, the conference “app” is my pick.  I’ve posted comments on that behind the ASUG site; what follows is my opinions on aspects of the app as used.

In the past, conference guides and feedback were on paper: guides and evaluation forms. In the future, everything is digital.  Paraphrasing William Gibson, it’s just not evenly distributed.

First, the set up: 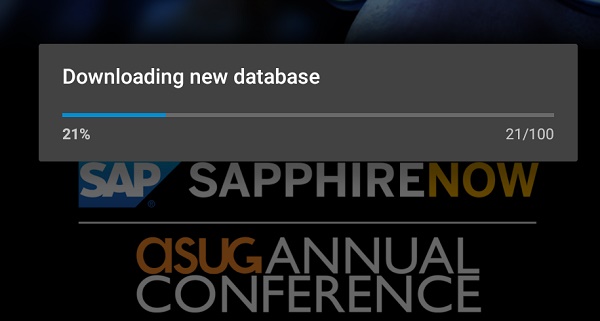 To get the conference app loaded on my Android tablet, I went to the app store, found it, then connected using my conference ID (somewhat confusingly, the app asks for “email” in several places but would take a code number instead – published prompts not matching the code logic is a typical doc bug). 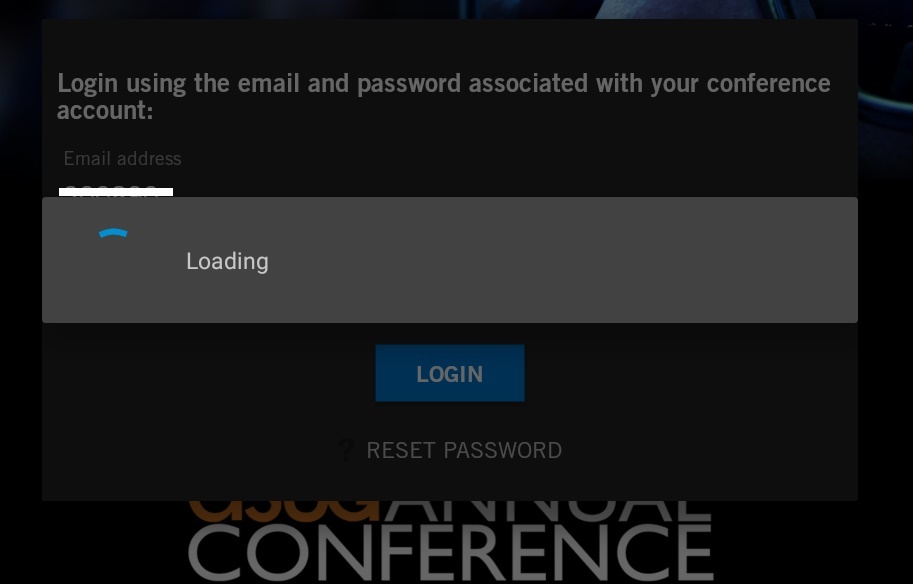 And, the load would start, depending on how many times a “new” database would be published.  I could never tell if only updates cam down, or the whole enchilada.  I was never given a choice of “do you want to download again or use what you already have”.  For speed, I’d take the latter, and forget any last minutes additions if I knew the session or booth I wanted to find was out there. 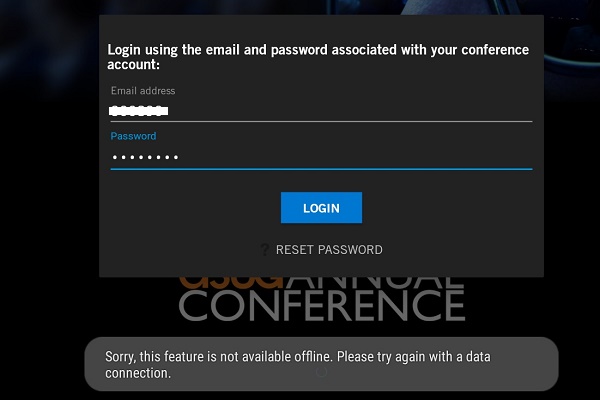 I discussed the above screen, showing a login failure while “offline” (meaning, I could not connect to the conference wifi network).  If you managed to connect earlier, you might have been able to start the conference app with cached data.  If enough time elapsed (or something else beyond my ken, you could not start the app.  That’s not a good design when conference wifi faults are a well trod complaint area. 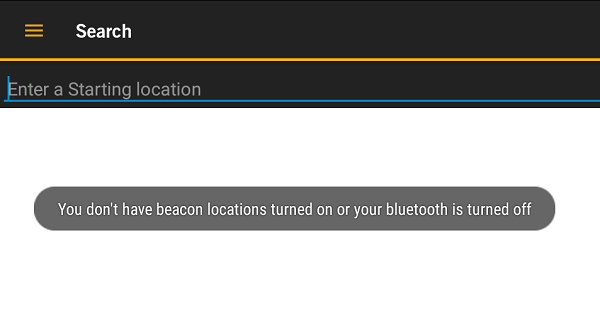 There is a great option to “draw a map” of the showroom floor, in case you needed to find the shortest route from where you were to where you thought you should be.  Alas, failed for me saying my GPS was turned off.  I decided to use dead reckoning instead, as GPS satellite viewing is often problematic inside buildings (“Beacons” being a different word for satellite, I guess). 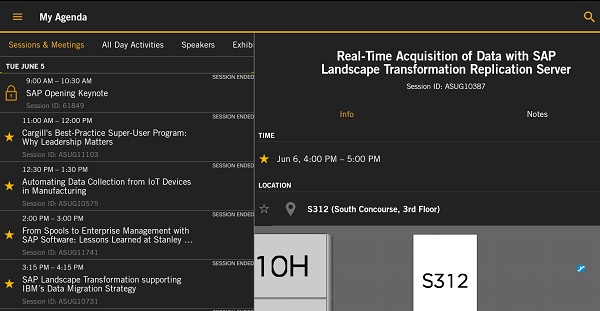 The maps included in the app for finding educational sessions was more helpful than the searching feature, as one of the tricky parts of finding rooms is sometimes knowing whether the open door matches the visible signs.  This year, I noticed more “door closed” signs that showed you where not to enter, at least.

A particular pain point I experienced was in session evaluating.  The above image shows my rating for one session – but is that one star or 4 stars?  I learned that on an IOS device, the ratings clicked showed up in yellow (as on the left side of the screen) but on my Android tablet they were only grey and white.  No numbers showing the literal pick that I could find.

My primary fault with this part of the app was the loss of “focus” when moving between sessions.  Ideally, one would rate each session as it ended, but practically speaking I might want to attend several sessions then rate them in a bunch since you may find the relative comparisons easier to make afterward.  When you click on the “Info” tab, you can see which session you are viewing as the title is visible on the right panel.

But when you select “Feedback” there is no indication which session you are rating.  Multiple sessions are displayed on the left panel; the right panel could be for any of them. 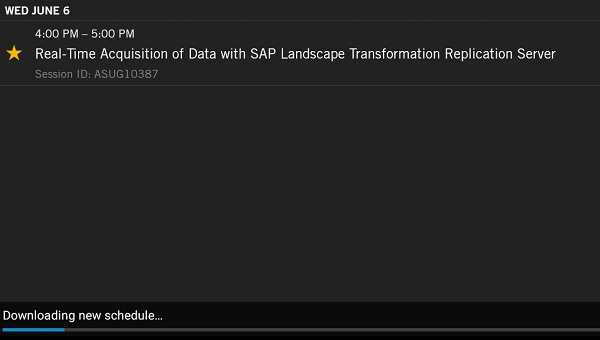 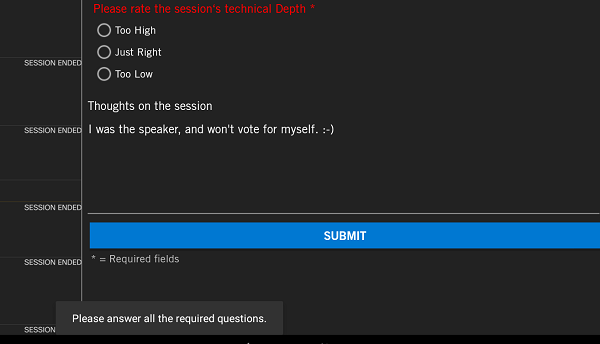 This is a minor gripe, but you can’t just answer one of the evaluation questions. Not permitted. 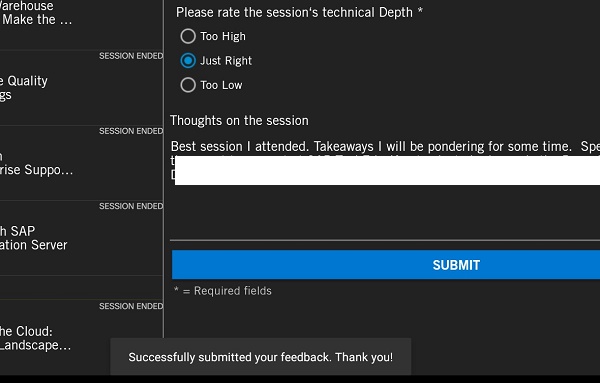 Last comment about the evaluation steps: once you figure out which session you are rating, and answer all required sections, you get a quick notification that you submitted (something).  However, the action button returns from “Submitting” …

to “SUBMIT” again.  It’s not obvious that your comments were recorded, though you can navigate to another menu that list those posted.  I assume the return to submit status is so you can revise your comments up to the deadline.

Enough of the bumps and grinds of the real world, what about those fascinating usability sessions SAP hosts, where you meet developers and throw them hanging curve balls?

For one thing, the SAP tokens of appreciation are often pretty cool (the picnic set one year was memorable, and about as far away from coding as you might get).  I got to drive, and had hopefully cogent feedback about nomenclature and navigating.  I can find or expose weak spots in applications, though whether they get fixed or not I may never know.

I recall one comment related to color contrast that I’d link to the above discussion about star color, without revealing anything about the subject matter or logical workflow – grey lettering on grey backgrounds is the pits.  I understand there needs to be several typefaces/fonts/backgrounds for textual area context.  If you can’t see something it just isn’t there.

The term “greyed out” implies an option is not available (at least to me).  Ambiguity in user design choices will aggravate some users, or allow errors/omissions that could be prevented through better views.

Contrast example 1: The green light has the focus. 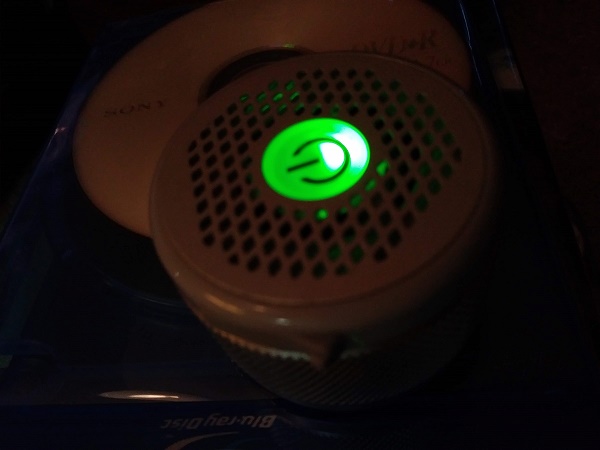 Contrast example 2: The green light is less focused, as the background colors and text are brought forward in the image. 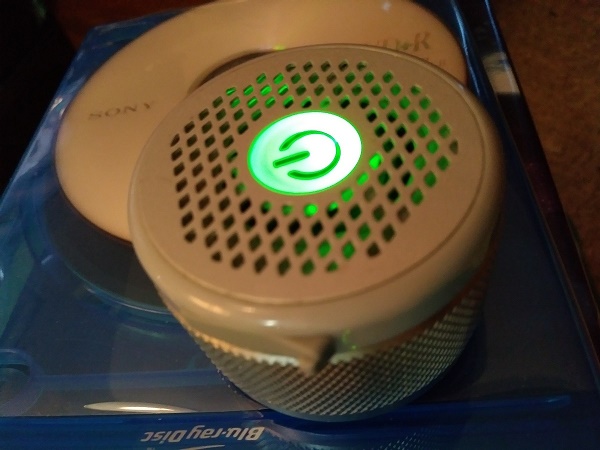 "Is it 1 star or 4 stars" - that's what I thought too. Very odd. If memory serves, it looked better on an iPad Mini that I used at TechEd last year.

Not sure if there have been any improvements in the app since last October but at TechEd it was cumbersome to find the sessions that you've attended outside of your agenda. And you're right, we don't always get a chance to rate the session right away. If I didn't need to locate the session to mention in the blog, I'd likely just given up on it.

Other than rating, none of the questions should be required IMHO. On some sessions, I'll leave a detailed comment. On others, I really have nothing else to say than giving them X stars.

Overall, not a great technology highlight. Not a bad app but that's a really low bar for a technology company.

Bluetooth beacons are used indoors where GPS can't reach. But apps probably need to be clear to indicate to their users what it is that needed turning on and why. If a tech savvy user like yourself misunderstood that, what hope do many others have?

I must have missed that in the app fine print... Usually, GPS is a battery suck, so when a app asks to turn on "location services" I decline unless traveling. The error "message" needs to be improved, as it says "you don't have beacon locations turned on or your Bluetooth is turned off"; instead should hint "turn on beacons in the app (or wherever) and/or turn on Bluetooth.  And show the current settings. I usually have Bluetooth on except when trying to pair a new device and flip it on/off.

I didn't mention in the post about getting conference wifi on my tablet on Monday but not later in the week.  Doubtless my device hardware, as my phone and laptop could connect.

There were also RFID tags stuck to attendee badges, ostensibly to count heads in sessions.  The portal tracking device, I heard, was a battery suck and needed frequent swap outs. 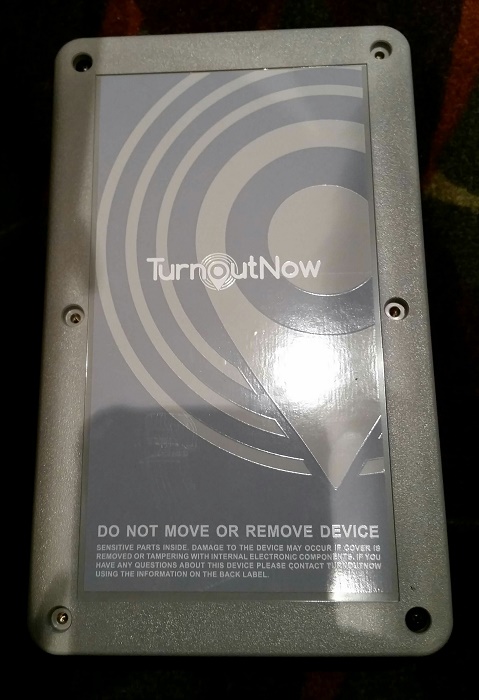 While the numbers at sessions should have been available immediately, when I asked about counts I got a "oh, we don't have that data."  Who does?

Maybe this was only for SAP employees, but as a presenter I got a login  to a website upfront where I could see all my sessions and the number of attendees for each including characteristics of them (industry, role, etc.).

I worked on the event planning from the ASUG side, and am familiar with the scheduling of rooms based on attendees adding sessions to their agendas.  That works mostly, though there may be rooms more full than others as the sign-up is voluntary.  I would sometimes add multiple sessions to my agenda a time slot, either deciding at the last minute which to see, or perhaps sitting half the time in one then moving to another.

I see the site you referenced as more like the ERP side, with a "richer experience".  But it's the planning tool.  The execution time tool is the conference app on the mobile devices, which have a distributed mobile database.  It's there where the feedback is recorded (not on the agenda web page).  The difference between "pre-registered" and "actual attendees" can be wide.

Then there's the databases behind the RFID and Bluetooth tech.  The former is where real-time data was collected (but not visible to me).

Sorry, I wasn't talking about the planning/registration data, but about the real-time RFID/beacon data for the presentations I did.