The Chilling Story of the (Inter)faceless Class.

I’ve been asked to rewrite a fairly important bit of functionality. This functionality has been modified in the past few years pretty extensively by a number of different programmers with different styles – although I wrote the initial version.

Since I’m starting from scratch, I’m naturally using the Test Driven Development approach. I mean – who wouldn’t? For various reasons, I cannot change any existing dependent classes. At least, not yet…

What I want to record is where I’ve met specific issues while developing the new version, and how I tackled them. I’m developing using Eclipse Oxygen.

The first problem I’ve got is a class that wraps user maintenance (let’s call it CL_SU01). It’s a nicely written bit of code, but with my tests, I don’t want to actually create or maintain any users. I’m working on 7.31 so I can’t use all the techniques you get on higher versions which make test doubles so much easier.

In my “code under test” class (from here referred to as my CUT-class), I create a local interface – lif_su01 with the same method definitions I need (and only those I need) from CL_SU01 , and a local class. lcl_su01 which implements lif_su01.  Initially, my local interface and class are empty, except lcl_su01 has an attribute which is a instance of CL_SU01,

As I’m building my code (write test, test, write code, test, fix…) I come across (in the fix phase) a need to call a method of CL_SU01. I add that to the methods of lif_su01 and implement in lcl_su01, The method in the local classes calls the same method, which has the same signature, of my instance of CL_SU01. These are written in the Local Types tab of the CUT.class.

So, how do I make the call?

First, I create a class attribute in the private section of my CUT-class, which will be an instance of lif_su01. But lif_su01 isn’t visible to the CUT-class, so in the Class-relevant Local Types tab, I add

In the CUT-class method where I need user information, I can do something like this (I’ve included the definition of the class attribute to make it clearer.:

The method exists of lcl_su01 has the same signature of as exists in CL_SU01, and it’s a simple pass-through call.

Now lcl_su01 isn’t visible, so in the Class-relevant Local Types tab, I add

This bit of code is finished, but before I can test it, I need a test double.

I create class ltd_su01 in the Test Classes tab. I prefer to put my test doubles before my actual unit tests. If it gets really cumbersome, it might be an idea to put the test doubles within their own include – but I’ve found this complicates navigation and makes things less visible.

This is what my ltd_su01 class looks likes (wrt to the method exists).

Ok, now I’ve a test double, I can use it my unit test methods. I’ll put it in the setup method, as I probably don’t ever want to use the actual CL_SU01 during unit testing.

At least. That’s the idea, but there’s another syntax failure. My test class can’t see attribute _su01 of the CUT-class.

Back to the Class-relevant Local Types tab, and add two more lines.

Now that my test class is a friend of the CUT-class, all is syntactically correct, I can safely run my unit test in the knowledge that I’m not going to update any user accounts on the system.

To make it clearer, and with thanks to Jacques Nomssi here’s a nice UML diagram of what I did. 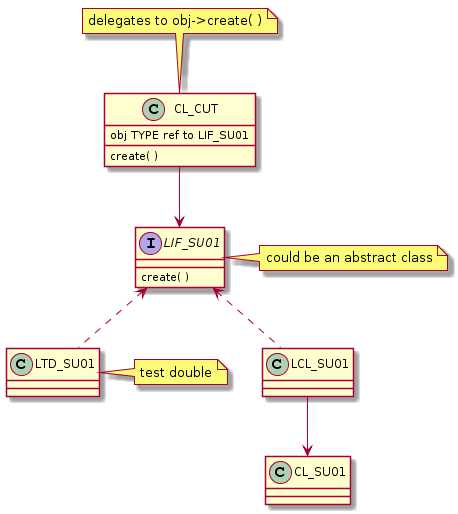 Another approach that might have worked, would have been to define the test double as a local subclass of CL_SU01.  The problem here is that the dependent class may be marked as FINAL, or it may have a constructor that has awkward side-effects you can’t avoid, as the super->constructor must be called from the subclass constructor.

Note that it would have been simpler if CL_SU01 had been defined with reference to an interface – I wouldn’t have needed lif_su01 nor lcl_su01. It’s easy enough to extract an interface from a class, and if you use aliases for components that now have an interface~ prefix, you’re guaranteed to not break anything else that calls your dependent class.

I'm not sure if it would help in your scenario, but a little trick I've used a few times was to create a hidden interface for turning static methods into instance methods, precisely for the scenario of removing dependencies. It's on my long list of blog ideas, but in short:

If your object is instantiated by a static method cl_obj=>new, then you can create an interface with a corresponding instance method lif_obj->new. Either your current class or a new local class can implement this interface, and you move the NEW code into there.

Inside the static NEW, you create a passthrough to a singleton lif_obj->new. In your unit test you can now inject a custom lif_obj prior to your tests.

It's a way of gradually converting static methods and direct references to interface instance methods without disrupting current calling code. And from a unit testing perspective the nice thing is you don't need to know where NEW is called from, it can be several levels deep.

This is quite Interesting. If you could give example then it would be great.

I don't really have the time to write up a whole example right now, but I'll prioritise this as my next blog. Will be a a couple of weeks as I'm extremely busy at the moment.

No Problem. But i will be surely waiting for this crazy stuff :-).

Too true!!!!  Right now I'm moving old code to new server.  I'm trying to NOT make changes.  And finding in many of the programs I have to.

Put them in a nice secure test harness before changing them. Of course, to do that you have to refactor... which is changing them...

At least you could write unit tests to cover the bits you're having to change? Or is it all global variables and forms... 😮

I am changing them.   And I am writing the unit tests after.  Some of the programs were the first ever written at this company.  However, they do need changing to work with HANA.   I'm good and terrified that the programs will break....

Now with dates looming it is critical that I have testing done.   Although our consultants are "unit testing" and "integration" testing them.  There easily could be something missed.  These are OLD. 3.1H old with no changes needed for 4.6C.

In other words we are getting to the end!  I stumbled through the data migration program. (LTMC/LTMOM).  We did have a consultant - he was learning as well.  He was and is amazing.  I am still stumbling with FIORI.  Again a consultant is here for this.   He's very busy right now.  Hopefully at the end we get some good training.

And all this is a lot of fun!  Of course I just got back from a 3 day vacation - so I can say it is fun!  And it's amazing I got the three day vacation.

I am here in the community a lot.  I'm just a ghost reading what I need and then getting out.  Of course today - I'm taking some time to read some blogs I missed.

Have a good one!

While dates never change, my experience has been that the scope often does. Albeit quietly so no-one kicks up a fuss...

Love this comment.  I'm laughing.  It is too true.

One of my favourite project-speak phrases: Scope deferral

Isn't it a smart proxy? 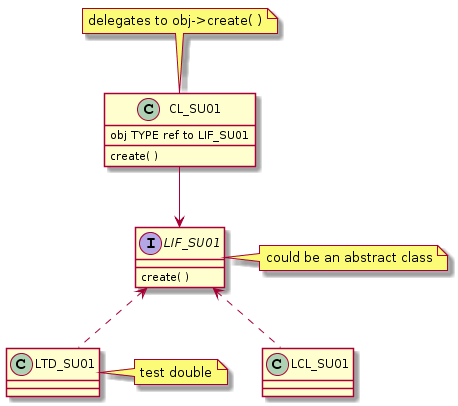 It’s CL_CUT_CLASS that has the reference to lif_su01. In my scenario, there’s no scope to change CL_SU01.

Yes! I’ll shall now shamelessly steal it and add it to my blog!

Is this still the smart proxy pattern though?

Is this still the smart proxy pattern though?

yes I think so. As I understand it, the intent is to control access, not to add functionality (decorator) or fit to another interface (adapter).

I have never seen the PlantUML tool, I just checked it out.

Then also check those tools.

Whoa... Ok now I have a whole new path of exploration.

This is a really good tool to help round out technical documentation, etc.

Super blog, blogs like these where we actually get to know how to have TDD done are a treasure house. So far have done it for small 1-2 fixes in support, i think it is must now shall be informed to the team also to incorporate it wherever possible not always( it is debatical)

The interface less class scenario is a huge area of work for me in my world as i work towards TDD.

thank you for sharing your example.