Getting HXE XSA Server+Apps on Docker to work for you

After spending time getting the HANA Express XSA docker image to run and seeing others with the same issues I was encountering, I thought I’d summarise the steps I followed to get it to work.

I currently have the HXE XSA docker image running with the following architecture: 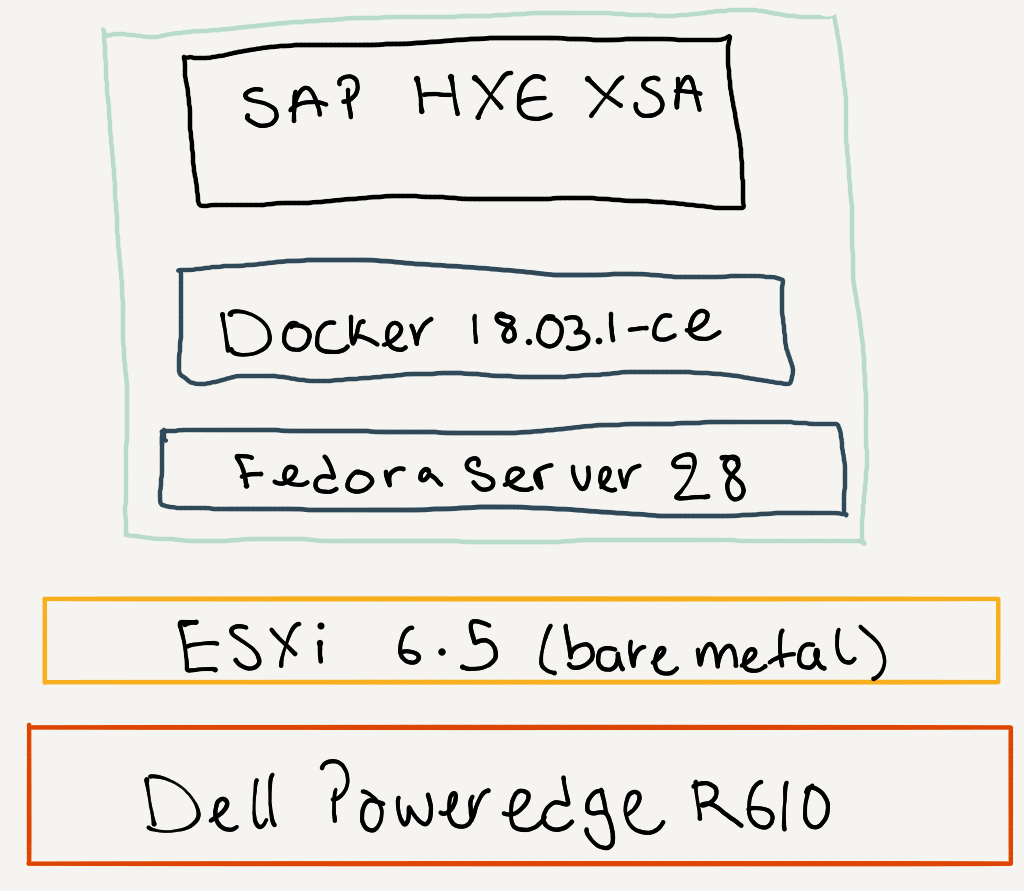 I use ESXi 6.5 to run all my images etc. so Fedora Server with Docker runs on top of this. I’ve mentioned versions as I tried various OS and Docker versions and had different issues.

For the most part you can follow this tutorial to complete the prerequisites, pull the image and start the container. There are a few things that I needed to add though to get this working, I’ll outline these below.

Congrats on solving your issue and thanks for sharing. It will be very useful for other people!

Hi Phillip. Thank for this summary, and especially for 6. Adrian Plata, can you please have a look at this in the HXE image, so that there is no need for this parallel step to manually delete a directory?

For 4, it might be a problem reading a file as I see you do not map container mount to your local directory. In my case it was /data/hxe_pwd.json file which I could read using options

And one more question: what is your host system, where you have ESXi running?

Thanks for the tip, correct I don't map container mount to the local directory.

And what OS on that Dell?

Running ESXi 6.5 as bare metal so Fedora Server 28 runs as a VM on top of ESXi and then Docker, HXE container etc. I added a quick diagram above, needed an excuse to draw something 🙂

Thanks for collecting the troubleshooting steps to get a HXE XSA running in a container.

Your step 6 helped me to get it going.

to ease the repair according to step 6 I had appended the ` --dont-exit-on-error ` parameter to the `sudo docker run ...` container build script.

In the tutorial you reference a step to prepare the directory where the container keeps its persistent storage is missing. Following the bare HXE server tutorial https://www.sap.com/uk/developer/tutorials/hxe-ua-install-using-docker.html Step 6 (Optional) for that step works here too.

entry to my /etc/hosts file to make sure hxehost can be resolved any time.

I hope you do not mind me extending your collection by a workaround solution I had found for a problem which might stop someone from continuing to run the HXE or HXE+XSA container.

Problem: after a (hard) shutdown/stop the container might fail to start again.

within the container the hdbdaemon will fail to start.

Solution a .pid file leftover has to be removed.  Details see issue:

Just want to thank you for this post. I faced this problem and you saved me several hours with this detailed blog!