Abstract
Understand the concept of blockchain and explore the services released by the SAP Cloud Platform blockchain service that allow users to develop blockchain scenarios.

Key Concept
Blockchain has gained traction and momentum with many companies, shifting the focus from theory to practice. The SAP Cloud Platform Blockchain service helps users to build a holistic solution on blockchain integrated with the SAP landscape.

Learning Objectives
By reading the article you will be able to:

If you have spent some time reading the latest technology trends, attended Sapphire or visited SAP Roadmap on SAP Cloud Platform, then you have likely heard the term blockchain. The initial application to be developed on the concept of blockchain was Bitcoin for the financial industry.

The heart of blockchain’s potential lies in the unique properties of a distributed database and how it can improve transparency, security, and efficiency. In laymen’s terms, blockchain is a shared, programmable, cryptographically secure trusted ledger. No single user controls it and it can be inspected by anyone. Initially, organizations used the central data repository to support transaction processing and the control of the database resides with the owner. Outsiders were not allowed to update the records and manipulate the database. However, a decrease in cost and advances in software, communications, and encryption allow for a distributed database spanning organizations.

Blockchain can be applied to all business processes. However, some of the major drivers of blockchain in enterprise applications are as follows:

Blockchain can be classified as follows.

Many companies are trying to build proofs of concept or projects on blockchain. However, they have to understand that some of the problems can be solved with relational databases and without blockchain (i.e., distributed databases). IT staff and business users should answer the following questions before saying yes to the blockchain scenario:

Let’s discuss these two business scenarios based on data volume in a supply chain to understand the above questions:

Blockchain Use Examples
Initially, in the utilities Industry only the producer was selling the electricity. Now with the shift in energy production and use of renewable energy sources for electricity generation such as solar power, both the producer and consumer can sell electricity. I discovered one of the examples for a utilities-based blockchain (the Brooklyn  Microgrid Project) during a recent visit to New York. In New York, neighbors are selling solar energy to one another. They have divided the community into two parts (one producing the electricity and other consuming the electricity). Since blockchain is peer to peer, each participant trading electricity had to have a computer with a blockchain node for their homes with solar panels to be able to sell power to neighbors. The blockchain network manages and records the transactions with little human interaction. The nodes in the computers are needed to validate and share the information to minimize the possibility of downtime or interference with the data. The more data that needs to be bundled into blocks and passed along, the more computing power is required.

Much of the hype around blockchain has focused on making changes in the financial industry by dropping complexity and increasing efficiency and transparency. For example, the clearing and settlement of cash entities has been streamlined over the years and is an efficient process today, but it still can take five to six days for the payment transfer if everything goes well. With some exceptions, all the communication between banks and intermediaries is either through paper mail or email. It is difficult for the customer to track the money. SAP collaborated with Alberta Treasury Branches (ATB) Financial and created a blockchain prototype that reduced the processing time from days to 20 seconds. SAP extended the SAP Payment Engine and used SAP Cloud Platform to transfer money from one bank to another.

Similarly, blockchain can solve problems in multiple industries as shown in these examples:

What is more likely to happen is that companies will follow a modal approach, using the legacy system, but adding blockchain for experimentation and updating of the centralized legacy systems. Blockchain offers digital leadership and business value to customers and internal stakeholders by building applications on SAP Cloud Platform. In short, blockchain won’t replace legacy technology overnight, but will co-exist with it for some time to come.

Now most platforms, including the SAP platform, have multiple services such as Internet of Things, Image Classification (a machine-learning service), and blockchain. SAP has recently released blockchain services under the Leonardo platform and is working to make them mature as per the business requirements of its customers. Blockchain services is now released for partners, customers and even SAP has started a Medallion program for Leonardo with multiple partners such as HCL, EY, Deloitte etc.

The SAP Cloud Platform Blockchain services are available as part of the Cloud Foundry and use Hyperledger Fabric for the development of business processes that require blockchain technology. Hyperledger Fabric is a project initially developed by IBM. Fabric is a plug-and-play implementation of blockchain technology designed by IBM as a foundation to develop high-scaling blockchain applications with a flexible degree of permissions. Fabric was designed to provide a framework with which enterprises can put together their own individual blockchain networks that can quickly scale to more than 1,000 transactions per second.

Click the trial link in the box shown in Figure 2 to access the Cloud Foundry dashboard (Figure 3).

Click the Spaces option in the left bar menu in Figure 3 to create the memory to access the blockchain services.

Click the New Space button in Figure 4 to create the space.

Enter the Space Name in Figure 5 and click the OK button.

Figure 5 Enter the name for the space

The space named blockchain has been created. Click the Blockchain button in Figure 6.

Click the Service Marketplace button shown in Figure 7 to view the blockchain services. 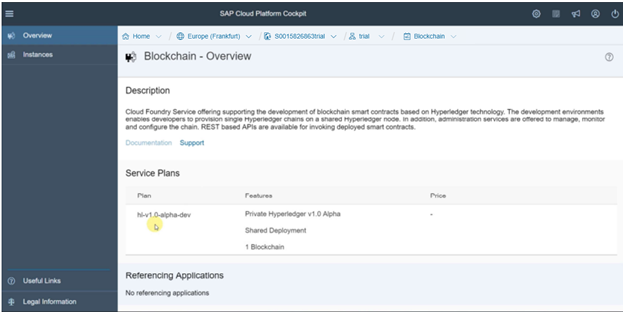 The service plan is automatically selected in Figure 10. Click the Next button.

Enter the Instance Name ledger in Figure 11 and click the Finish button to create the blockchain service instance. 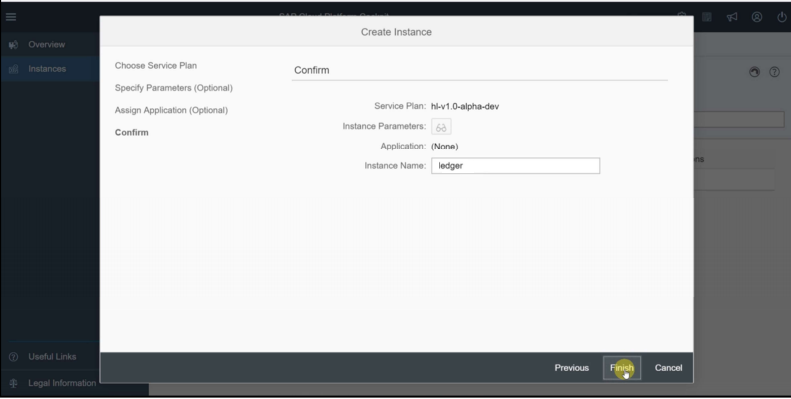 Once the instance is created, you can either bind the service to an internal SAP Cloud Platform application or create a service key to access the service from an external system. The next step is to write code as per your business scenarios.

As a provider of enterprise platforms, traditional ledgers, and deep knowledge of multiple industries, SAP is being asked for help in connecting the dots between the prototype system and enterprise systems so that the blockchain concept can be turned into business results. Now with the release of SAP Cloud Platform Blockchain service, businesses are enabled to rapidly develop new applications or extend existing ones built on SAP ERP Central Component (ECC) or SAP S/4HANA.

I will be writing more article focusing on the architecture, integration, use case etc. for the Blockchain.

some trial accounts have to go through Entitlements step and some of the CF services seem to be available in some data centers and some not. also, there seem to be limitations on service plans and ability to join channels. regardless, CF access is also limited in time, even when renewals are included.

in any events, good findings from the TechEd and other info sources.

I am looking into granular details on SAP integration with blockchain in terms of BAPI,oDATA,and IDOCS used.

Please let me know BAPI details which can be used to communicate with Blockchain API directly.

Please suggest some other integeration method of SAP with blockchain.

I have followed the blog , in step 10, fig 10, when trying to select service plan, i get an option to select channel, when channel is selected, the instance is not saved, it is showing error below

can you please help.