The Future of Logistics is Underground: SAP collaborates with Cargo Sous Terrain on Urban Logistics Project

Trends like globalization and urbanization as well as the digital transformation of the retail market have led to a significant increase in freight transported across our planet. This development is still far from reaching its climax. For example, the parcel volume shipped within Europe is predicted to increase by another 69% until 2021 [1]. This massive growth demands for new approaches and concepts in logistics to ensure the sustainable transport and delivery of all these goods.

The population of northern Switzerland is projected to grow to 10 million inhabitants over the next 15 years. The whole region will become a densely populated metropolitan area with an ever-increasing demand for an appropriate infrastructure. In particular, logistics and supply services will face huge challenges as a forecasted 37% increase in freight transport until 2040 must be managed within Switzerland’s difficult geographical conditions.

In 2013, major swiss retailers Coop and Migros, large logistics organizations such as SBB Cargo and Swiss Post, and others joined forces to find a solution to these challenges. They founded Cargo Sous Terrain (CST), an association that aims at providing a novel, largely automated, and digitalized logistics system for northern Switzerland. Over time, additional companies, including Züricher Kantonalbank, Mobiliar, Swisscom, hyperloop one, and Cargo Tube, joined CST, which recently has been transformed from the former association into a corporation. SAP joined the association in early 2017 and is now a shareholder of Cargo Sous Terrain AG.

The key idea behind CST is to put freight transport underground by establishing a tunnel system connecting all major logistics hubs within the region (see Figure 1). By doing so, freight traffic can be reduced by up to 40% for particularly critical parts of the infrastructure like the busiest motorways. 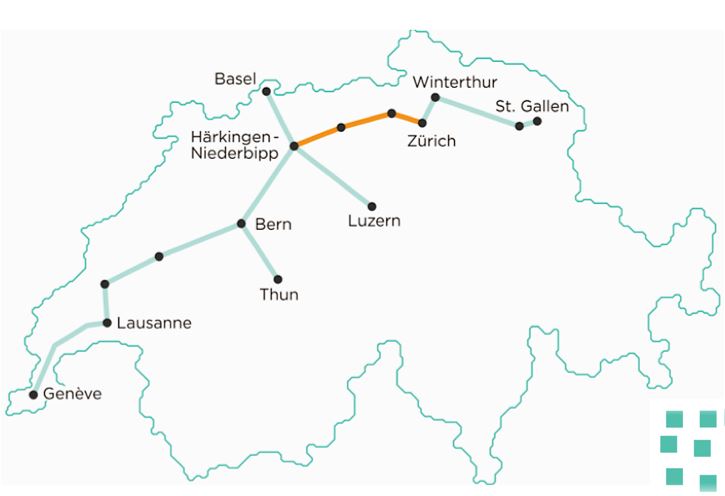 Besides the tunnel system, another differentiator that sets CST apart from existing logistic services is its ambition to provide a one-stop-shop for the complete end-to-end transport of goods including local pick-up and delivery. CST positions itself as an open platform that plans to collaborate with existing logistics service providers rather than competing against them. The end-to-end approach allows CST to guarantee very specific windows for the planned arrival time of goods. CST also changes the existing transportation paradigm of transporting goods in large truck loads of multiple tons to a continuous transport flow of smaller units of up to two pallets. This significantly increases flexibility and reduces the duration of planning cycles.

Going forward, contributions from SAP might cover areas like the underlying cloud platform and innovations from the SAP Leonardo portfolio, such as Internet of Things services for real-time monitoring of the tunnel vehicles, machine learning for demand forecasting, or blockchain for the automated negotiation of transportation contracts. Solutions from SAP’s application portfolio including SAP Supply Chain Execution Platform or SAP Asset Intelligence Network cover significant parts of the CST requirements already today.

Currently, the CST initiative is about to close the first phase of its endeavor which started in 2013. This phase has been focused on feasibility studies, business models, and the legislative framework.

Meanwhile, CST has acquired about 100 million CHF of funding for the second phase, which will start in 2019. Main deliverables will be a productive system for the city logistics part generating first positive cashflows, a detailed plan for the overall system, and the completion of the required permits to start the tunnel construction no later than 2025.

Figure 2: The timeline for the CST initiative.

Content-wise the work is structured along the three main components of the CST solution:

Urban logistics is a top priority for many of the CST stakeholders and a well-established, smoothly running urban logistics system is a prerequisite for the successful go-live of the tunnel system in 2030. Accordingly, the CST advisory board decided to immediately start working on this topic with the goal of having a system available for productive use already during the second project phase.

Hence, a Smart City-/Intercity-Logistics project has recently been started. Smart in this context means that the system will make intense use of new digital technologies – particularly Internet of Things and artificial intelligence. The project will provide a concept for a step-by-step introduction of CST’s last mile solution. The starting point will be a stand-alone smart city logistics solution for Zurich which will be extended towards an intercity solution connecting multiple cities in a second step. Finally, this intercity solution will be fully integrated with the overall CST system.

The Smart City-/Intercity-Logistics system will be designed with a focus on the goods recipients and will be open to any transportation service provider. In addition, it will demonstrate innovative CST transportation systems like trolleys, autonomous e-vehicles, city transshipment areas, and mobile, autonomous pick-up stations. So, stay tuned as we will reveal further details on these concepts soon.