What does this document have to offer?

The focus of this blog is to present an overview of the new programming techniques in ABAP after introduction of HANA database. The focus will be towards providing a guideline on why and how an ABAP developer should start transitioning its code to use the new coding techniques.

Who should be reading this?

Here the target audience would be ABAP developers who are looking forward to getting a basic understanding of ABAP on HANA programming and to understand why to opt for these new features.

Areas covered in this blog:

SAP ABAP has been rapidly evolving over the years. With introduction of S/4HANA it went to graduate to become a far more impressive and productive language. If you ask me how ABAP has improved then the answer is “Code-To-Data” Paradigm.

The traditional approach involves bringing data from database to our presentation server, doing the data intensive calculations & filtering and then presenting the filtered data to user.

The new HANA approach is to push our code to the database layer where all the data resides, do the calculations at database layer and bring only the relevant records to presentation server.

Because of C2D paradigm the delay caused due to latency of bringing large volumes of data to presentation layer is removed drastically resulting in high performance even with very large data sets.

To better understand this let me proceed using a basic scenario that any ABAP developer can easily relate to:

In this scenario, the performance would suffer because of fetching data for all vendors, for all company codes & for all Purchasing Organization. The resulting report will require a background run and the traditional ABAP report flow in this case would fetch data as follows: 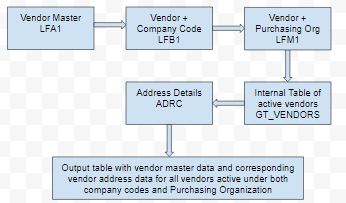 Here the presentation layer would interact with a couple of times if no joins are used under select statement. Moreover, using joins to fetch data from these tables would also be very slow because of large volumes of vendor data in system. So how must I improve the performance here?

OpenSQL programming (though limited at this point)

Let us visit each of the above features and see how they work with HANA DB.

With OpenSQL programming you can write openSQL syntax in your ABAP code.

While writing code in OpenSQL the fields in select statement are comma separated, all the host  variables are escaped using ‘@’ sign, the concatenation can be done in a single statement using ‘| |’ and so on and so forth.

The above scenario will be written as follows:

Here you can see that report ran for 1621 ms and returned us the desired results.

This is a very basic example that I took but in real time scenarios you may be doing some aggregations, or you may be translating some data during selection, or you may be grouping your result set based on some fields. Though the code push code opportunity is limited at the moment when using OpenSQL, the syntax for this has been enhanced since 7.4. release. SAP has many syntaxes that can be utilized in code to improve its performance. To start with you can find very descriptive examples and code snippets in the ABAP glossary itself.

SAP introduced a new data modeling infrastructure known as core data services or CDS. With CDS, data models are defined and consumed on database server rather than on application server. As a result, the table result view is created at the database level. CDS are completely compatible with openSQL and can be written using ABAP development tools like Eclipse Oxygen. These can be consumed by reports and AMDPs as well.

The above code will be created as a data definition in Eclipse and defined as follows: 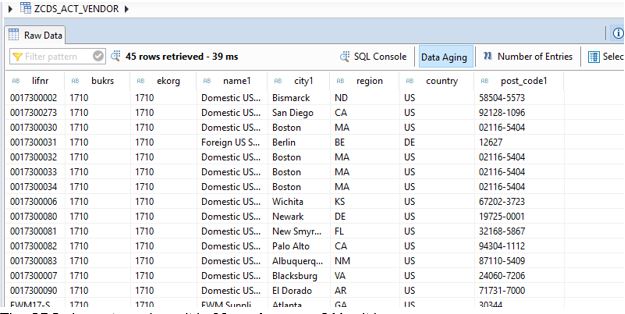 The CDS view returned result in 39ms. Awesome? Yes it is.

You could also create a CDS with association for a similar scenario if you have many tables to address in the view and if you want to keep the result set flexible.

AMDPs as the name says are database procedures that run on database directly and are written directly in ABAP. AMDPs are written using AMDP classes. Below is an example using the above scenario of how to create an AMDP class. The interface “IF_AMDP_MARKER_HDB” distinguishes an AMDP class from other classes.

Similarly, an AMDP class implementation will have methods define with a syntax “BY DATABASE PROCEDURE FOR <database> LANGUAGE <language>. In our case database will be HDB (HANA DB) and language will always be SQLSCRIPT.

This AMDP class can then be consumed in an ABAP program to achieve the code push down functionality.

What to choose OpenSQL or CDS or AMDP?

A question that would arise in any developers mind would be how to make a choice amongst the three programming techniques.

In the above example you can see that the performance was CDS > OpenSQL > AMDP.

Does that mean for the above scenario the best choice is to create a CDS? Not exactly!

If I do not reuse the CDS view then openSQL could be an equally effective choice.

Also note that CDS views and AMDP can only be created using ABAP Development Tools like Eclipse Oxygen. Refer the following link to understand on how to get eclipse on your system:

There are no rules that can be adhered to when choosing from the above three programming techniques. It completely depends on the requirement and on what and how data needs to be handled. However, the points below can give an idea on how to proceed to making the most productive choice.

This blog was to give you a kick start on what HANA has to offer and what you can do with the new techniques. My advice to any beginner would be to get your hands on a system and just try.

Beautifully written blog! Thanks Pallavi for keeping it Simple

Thanks for your feedback Gaurav. That was the whole intent, to keep it simple and easy to understand.

Nice Blog . Thanks for sharing.

Thanks for your blog.

Excellent!!! Write more blogs like this. Appreciate your efforts to bring the complex things into simple documentation in a understandable manner to everyone..

I have few questions

i know my questions sound little funny but i am a starter . please answer this questions.Thanks

Thanks for writing this.. very helpful

Thanks. Crisp and clear explanation.

The way you started explaining made me read entire blog.

Start Point for ABAP on HANA

Just want to share for everyone's knowledge that CDS view has been created in Eclipse.

It fetches the result set quickly but doesn't involve ALV display like AMDP and openSQL.

The database procedures are faster than openSQL. It is interesting to see the trend otherwise here.

This is something which can be explored further.

Very very well explained. you made it so simple to understand. Thank you.

Thanks for nice explanation, very informative.