SAPPHIRE NOW / ASUG annual conference 2018 – The vision, the inspiration and the aspiration

I return home extremely inspired by the vision of SAP but also by the humanity of SAP. SAP makes the world run better is not just a slogan, I could feel it and I do not have any doubt that those actions and intentions are real. It actually makes me feel proud to be part of SAP’s extended family. I couldn’t agree more with SAP’s CEO Bill McDermott’s statement that family is really important and that trying to teach your children and providing them guidance is one of the most important things you should do in your lifetime. Time is precious and time flies so you should use it well. 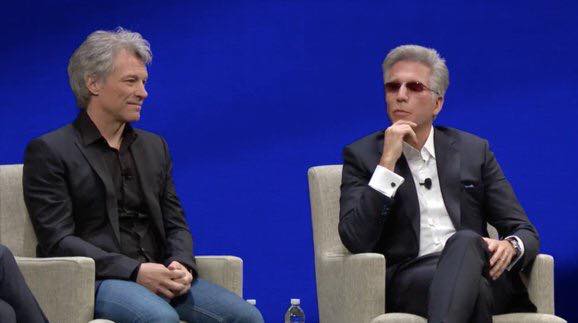 Goosebumps surfaced multiple times this week, during the keynote with Jon Bon Jovi where I could feel the emotion up to where I was sitting (close up front), during the concert of Justin Timberlake (in the back) and last but not least during my visit to the Kennedy Space Center the day after the concert, walking into the hangar where the space shuttle Atlantis is kept. You only live once so I seized the day together with a few of my SAP Mentor friends.

I loved the fact that such elements, empathy, emotion, caring for others, inspiring others were featured in the keynotes at SAPPHIRE NOW. They really do matter. I also applaud the efforts SAP has been doing in terms of diversity and inclusion and I was really happy to see many, smart, strong women on stage during the keynotes as well as many nationalities and even a good mix of diversity in terms of age dispite some who argued Hasso should go on retirement. The keynote with Jon Bon Jovi was truly inspirational, I felt so strongly about it that if I would only have seen that keynote, my week would also have been worth it.

So you can say I was blessed to have had the opportunity and privilege to be there. I arrived on monday on a delayed flight, late for the SAP Mentor reception. That’s unfortunate but it was a wish of my own little family that I would spend my sunday with them still so I did. It was great to meet up with the many SAP Mentors present and I was happy to have had the opportunity to invite a first time attendee to attend as well who also helped contribute to diversity and inclusion, a topic I care about as well. Over the course of the week, I participated in a number of SAP Mentor meetings, gave feedback to SAP in different ways but I also learned a lot, talked to a lot of persons and I return home with heaps of inspiration, heaps of notes and the aspiration to create magic once I get back to work. I spotted a cap with « Failure is not an option » in the Kennedy space center and I went ahead and bought it. Failure is an option but it’s not the intent so I start with positivity and the assumption that I will do fine, as everything seems to work out fine for me in general, in the end.

Some articles describe the keynote messaging as « fluffy » but I disagree on this. I believe SAP is on the right track if you would ask me and this is important for the future of SAP and everyone in the ecosystem of SAP. Multiple acquisitions have been made over the past months and years by SAP which all somehow need to fit together. With the announcement of C/4HANA there is a commitment from SAP to make this happen in the CRM space.

A similar statement was done with the announcement of SAP HANA Data Management. Previously, loosely coupled products that now are going to come together as a suite. The vision sounds great, having universal data available across a whole enterprise. SAP has everything in store to make this happen. Again, SAP will need to deliver on this and again, most of the applications / products involved already exist, few are still to be conceived in order to get this suite to be a suite really but that’s fine in my opinion. I certainly don’t come to SAPPHIRE to only hear about what already exists and what is already out there.

One small thing which was mentioned but not really picked up to a large degree is the fact that SAP is reimagining master data again with Master Data Management as a service. Right now, master data is all over the place with a portfolio that is as diverse as what SAP is offering. This is a topic that I believe is to be watched going forward.

Living up to the vision

Up to SAP now to live up to what they committed to. A couple of things that I would like to see are a consistent end-user experience (Fiori design paradigm) across all (or as many as possible, where it makes sense) involved applications, seemless integration into other SAP suites/products and last but not least clarity when it comes to pricing and licensing as that often remains a difficult exercise for many SAP products and services.

The fact that you can buy a « prepaid » package, single contract deal to leverage SAP Cloud Platform is a step in the right direction but what I would really like to see is real « SAAS » pay-on-demand style pricing/licensing. What I’m used to when it comes to utilizing services from lets say Amazon for example. You pay for what you consume but you don’t pay before getting started. I believe this next step can show that SAP is transforming and is becoming truly consumer centric. It can make the statement of clearing away from the old school CRM – contract based licensing and stepping into the new world which many of us are acustom to already nowadays. A challenge for SAP due to it’s history? You can bet on it. This is however the new reality, this is where SAP should be heading for.

All in all, I found this to be the best SAPPHIRE NOW’s / ASUG annual conferences I’ve attended up to date. I hope I can say the same thing again next year and the in the years to come.

Nice blog, Tom! It's good to see a positive reflection on the event. Diversity of opinions is important as well. Someone needs to balance out the grumpiness. 🙂

What you outlined under "living up to the vision" - I believe every SAP customer would agree. Who doesn't want a consistent user experience and seamless integration? Delivering it on practice is the hard part though.

Thanks. I can believe the event can be experienced in completely different ways as well. I might have been an atypical attendee as well 🙂 It also comes down to setting expectations of what you want to get out of the event. I found the value tmany superseed my expectation so in the end I can only say I am really happy about my experience.

I know that I shouldn't go to certain sessions because I will be bored and I will feel like I've lost precious time. I spent a good amount of time at different SAP booth's, asking pretty specific questions to which I was seeking the answer for example, great value in my opinion as many of my questions were answered right then and there.

I'm curious to see how the delivery will come together. I'm always happy to give the solution a spin and give honest, candid feedback so SAP knows where to find me 😉